I was planning a fun blog post for this morning with lots of pictures of adorable toddlers having the time of their lives at Beckett’s Sesame Street themed second birthday party!  And I would, if I could, but I can’t…because the party didn’t happen. 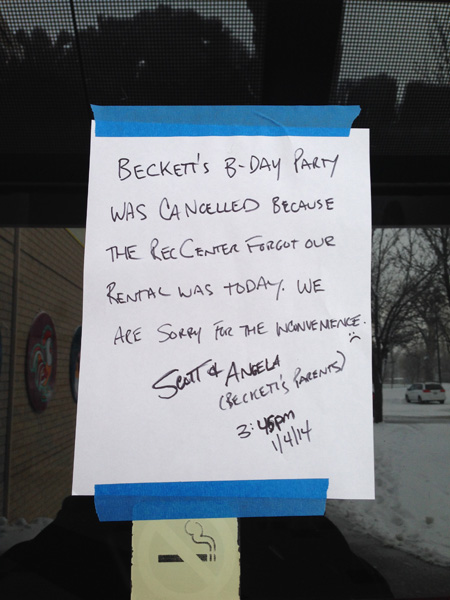 But let’s start at the beginning of this sad story. You see, I had this great idea to rent the multi-purpose room at our local rec center for Beckett’s birthday party this year. Beckett’s three favorite things at preschool are story time, music, and art, so I wanted to combine all three for his party. We wanted to invite all of his friends from school, but since Beckett was in the process of transitioning from one class to another at school, this meant that we needed to invite all of the kids from the class he was moving out of as well as the class he just moved up to.  Add to that the children of our close friends, who we also wanted to include, and it was going to be a BIG group.

Rather than trying to fit everyone into our house, I thought it would be so much easier to have one big open room at the rec center where we could set up tables for arts and crafts, and still have space available for all the kids to sit on the floor for a story time.  We made arrangements with Beckett’s favorite preschool teacher to read books to the kids and sing songs with them, and I spent a lot of time putting together a fun craft project. I made a some great Sesame Street decorations, and even created a bean bag toss game. We had RSVPs from about 30 kids, and we were ready to party!

I was so proud of myself because, after a week of preparing, I – for once – finished everything the night before and was not scrambling to get things done at the last minute! I wanted to make the set up at the rec center as quick and easy as possible, so I removed all of the plates, cups and napkins from their wrappers; I put together a kit of necessities including Command strips, tape, scissors, string, and everything else I might need to putting up the decorations; and I neatly packed everything into three bags – one with the food, one with the paper products, and one with the arts and craft supplies. 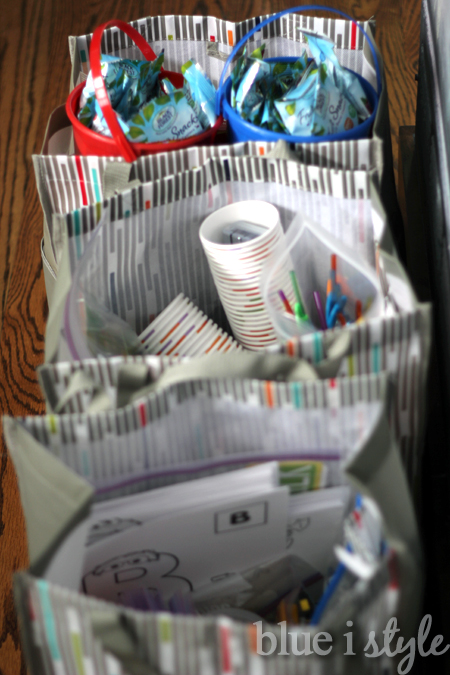 The boys spent the night with my parents so that Scott and I could pick up the cupcakes and balloons and arrive early at the rec center to get everything ready. The rec center closes at 1 pm on Saturdays, but we wanted to do the party after nap time, so I had signed a contract for an after-hours rental from 2-5 pm, with the party starting at 3 o’clock. As we were driving to the rec center, I suddenly had this feeling of panic. What would I do if the person working the after-hours shift at the rec center didn’t show up and we couldn’t get it?  I said this out loud, and Scott reassured me that I was just a worrier and that this would never happen.

We pulled in to the parking lot about 5 minutes early and sat in the car until 2 pm. I then approached the front doors trying to kick the bad feeling I had, reached for the handle and pulled. The door was locked. But of course the door would be locked – the rec center was technically closed and they wouldn’t want just anyone to be able to come in.  So we knocked, we called, we waited… We knocked and called some more. We stood in the snow and freezing temperatures reassuring each other that the rec center employee was just running late because of the snow.  Then I peaked through the window of the multi-purpose room – the room that was supposed to already be set up for us with tables and chairs – and saw that the room was totally empty. That’s when I started to cry!

By about ten minutes past 2, Scott and I were both in take action mode. The bulletin board outside of the rec center had the phone numbers of all of the other Denver public rec centers, so we started calling them all in hopes that the manager of one of them might have contact info for the manager of the rec center we were locked out of – a cell number or a home number, or anything other than the phone number for the vacant front desk that we could see through the glass doors. Everyone was sympathetic, but no one could help us. I called the administrator of the Denver Parks and Recreation department, but of course she wouldn’t be in the office – it was a Saturday afternoon.

I called my parents to warn them that things weren’t looking good and asked them to please not mention the party to Beckett as they were bringing him to the rec center in case we had to cancel. Cancel?!

As 2:30 neared I started to hope that I had simply been mistaken and that I had told them I wanted the rental to start at 2:30 instead of 2.  Surely that must have been what happened.  Someone would pull into the parking lot any minute to unlock the doors and wonder why we’d been standing around in the snow early. But 2:30 came and went and reality set in.  No one was coming and the party was not going to happen.

Worst of all, we didn’t have phone numbers to reach most of the guests. We had handed out invitations at Beckett’s preschool, but I didn’t have phone numbers for the parents of his classmates. I started to call a few of my friends who would be on the way with their kids, but I was only able to get through a couple of calls before cars started to pull into the parking lot, including my parents with Beckett in the back seat.  Scott and I walked around from car to car apologizing and letting them know that the party was cancelled. Despite the freezing weather, a few people got their kids out of the car and took them over to Beckett’s window to say hi and to give him cards and balloons. I felt awful sending everyone away after they had driven through a snowstorm to get there, but everyone was so kind and empathized with our situation.

A few minutes after 3 pm, Scott’s phone rang. It was the manager of the rec center. Scott talked to him briefly and then handed the phone over to me since I was the one who had made all the arrangements with him. He explained that the person who was supposed to be working during our party had called in sick, and that the replacement had not shown up (obviously). He had been unaware of the situation until someone tracked him down on his cell phone (I’m not sure who finally got in touch with him, but one of the nice people we had spoken to at another rec center must have continued to work on our behalf and found a way to reach him). He said he was sorry and that no kid should have their party canceled, but he sounded quite matter of fact and not sound nearly as apologetic as I wanted to hear! He said that he could come over to let us in to the rec center, but with weather, it would take him at least half an hour, if not longer.  At that point we had already turned away most of the guests, and I told him that, sadly, it was just too late!

The silver-lining in all of this is that Beckett is not quite old enough to understand, and therefore this wasn’t nearly as upsetting to him as it was to me. I had been talking to him about his party and telling him that all of his friends would be coming to see him, but he doesn’t yet have much sense of time, and I don’t think he realized that his party was supposed to be that afternoon.  A year from now I think he would have been much more aware, and would have been devastated to see us sending all of his friends away.

I have since talked to the rec center manager again and we are going to take him up on his offer to reschedule the party to next Saturday, with the rental fee waived, of course. Fortunately, I spent the majority of my hours of party preparation on the decor and crafts and things that can just as easily be used a week later. I had wanted to decorate some awesome Sesame Street cupcakes, but ran short on time and ended up ordering simple cupcakes from the grocery store – now I am so glad about that as we’ll only be out the cost of repurchasing cupcakes and not hours and hours of time. Now we just have to re-invite everyone and hope that a lot of the guests will be able to attend next weekend! 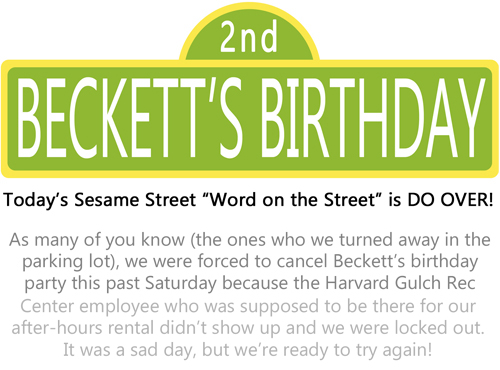 Fingers crossed that next Monday I will be able to share photos of a fantastic birthday celebration!  In the meantime, I’ll go ahead and show you some of the party details later this week, including the craft project I put together, and the DIY bean bag toss game that I created.  We’ll just consider these the sneak peeks. That’s the way to put a positive spin on it, right?!