I am relieved happy to report that our second attempt at Beckett’s birthday party was a huge success! {If you missed all the drama, you can read the full story of why the first party had to be cancelled, leaving me in tears.} This past Saturday, we managed to entertain 30+ toddlers without too much chaos, and I heard more than one little boy declare it “the best party ever!” on his way out the door. Now I fully realize that this is one of those “you say that to all the girls” kind of statements, but it makes me smile to know that the kids had a good time – most importantly my little man!

So, as promised, here’s a summary of Beckett’s Sesame Street Second Birthday Party…

Due to the sheer number of kids that we were inviting, it was a given, right from the start, that we needed to find a location other than our house for the party. Beckett LOVES books and loves to sing, so I knew I wanted to do a story time for his party, and my first thought was to rent the basement of our neighborhood library, which has a huge open room used for story time several days a week. I contacted the library, received a ridiculously low quote for the room rental, and said “where can I sign?” Unfortunately, I got a call a few hours later from the librarian informing me that she had learned that Denver Public Library policies preclude the library spaces from being rented for birthday parties. Bummer!

Then I started making calls to a couple of our nearest rec centers, and went to check out the “multi-purpose room” of one of the rec centers in person.  The room was perfect – one big, open space with tons of big windows to let in natural light, clean white walls, and hardwood floors. The only catch was that the rec center closes at 1 pm on Saturdays and the room is always booked with fitness classes throughout the morning. But the rec center manager told me we could do an after-hours rental in the afternoon (post nap-time), and the additional cost was not prohibitive. I signed the contract and grinned ear to ear knowing that I could give Beckett the party I imagined. After a major hiccup on the originally scheduled date {I refer you back to that sad story}, we quickly re-invited everyone to the rescheduled party, and fortunately nearly everyone was able to attend.

Because of the age of the kids, we wanted to keep the party to a short one and a half hours, but we managed to pack in a lot of fun!  Since Beckett loves Sesame Street, that was the obvious choice for the party’s theme, and I tried to tie it in throughout each element of the party, starting with the invitation, which I designed in Photoshop. 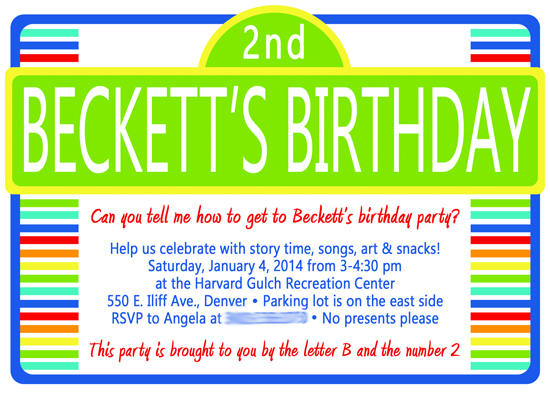 When guests entered the party, they were greeted by a six foot tall lamp post with a Sesame Street-like street sign reading “Beckett’s Birthday.”  This DIY backdrop made a great photo spot during the party {Click here for a super easy tutorial on how I created the lamp post backdrop.} 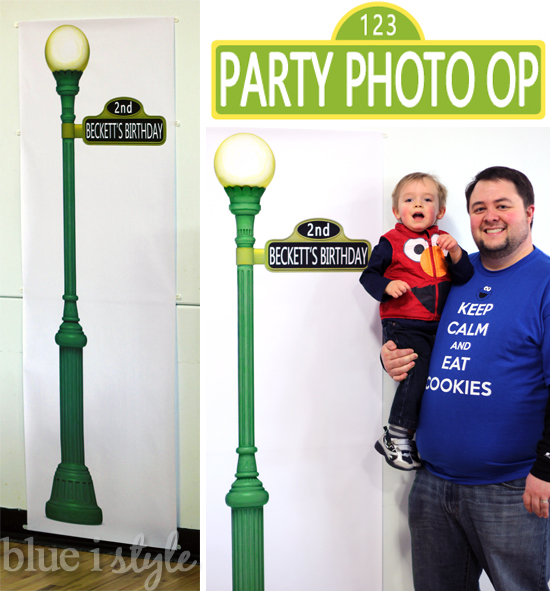 Since the party took place in the late afternoon, we didn’t need to feed the kids very much, but we did want to provide some snacks. 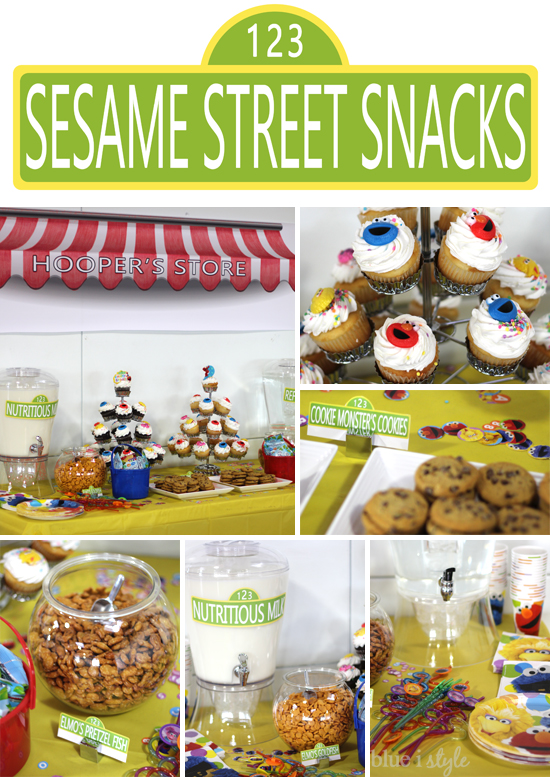 To set the Sesame Street scene, I hung a six foot long DIY Hooper’s Store awning above the table.  While this was simply a flat “poster” of sorts, it really had the appearance of being dimensional, and it had a big impact on the overall look of the party. {Click here for a super easy tutorial on how I created the awning backdrop.} 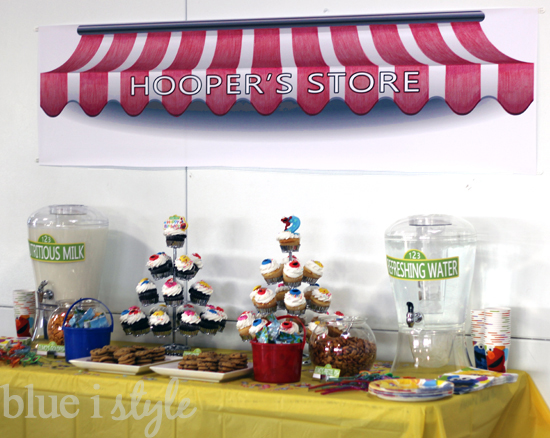 For such a large group, cupcakes seemed easier than cake. While I originally had grand illusions of decorating each cupcake to look like Elmo or Cookie Monster (along the lines of the amazing Sesame Street cupcakes I had seen on Pinterest, like these and these and these), I quickly came to my senses and faced the fact that I would be scrambling to get the other party details finished up so close to Christmas, and that I should focus my time and energy elsewhere. {Although, my mom did help me to make a fun Elmo cake for Beckett on his actual birthday, which I’ll share with you later this week.} So I took the easy way out on the cupcakes and ordered them from the grocery store. To make the cupcakes a bit more fun, I did purchase four dozen Sesame Street plastic ring cupcake toppers (for a cost of only $12).  While this was certainly the cheap and easy route, I think the cupcakes ended up looking great, and the kids had fun wearing the rings after eating their cupcakes. 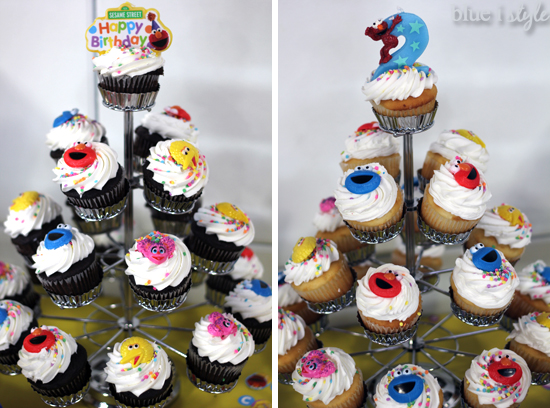 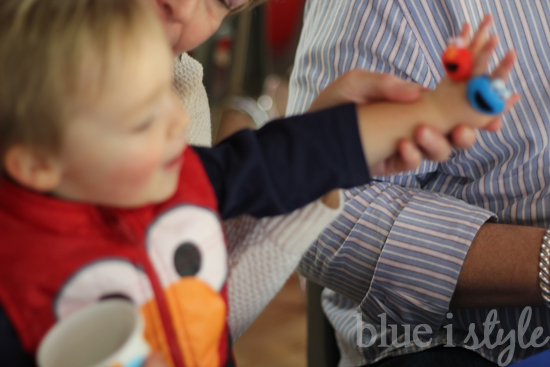 The two top cupcakes were adorned with Sesame Street candles, one purchased from my local Party City, and the other from an online store called Treasured Birthdays. 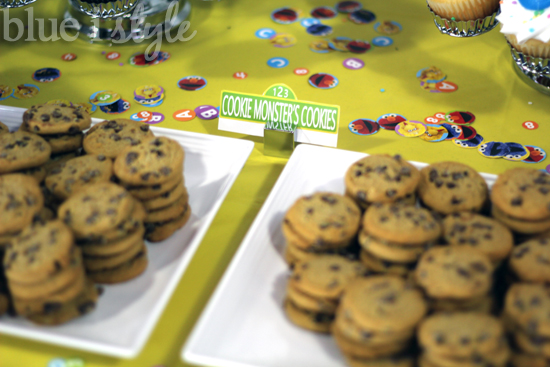 Beckett loves crackers and pretzels, so in honor of Elmo’s pet goldfish, Dorothy, we served Goldfish Crackers in both the cheddar and pretzel varieties. In place of regular serving bowls, I purchased two inexpensive plastic fishbowls on Amazon, and small silver scoops made it easy for the guests to serve up the fish. 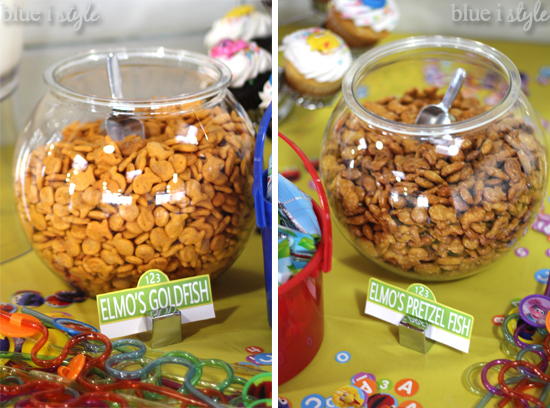 The snacks were rounded out by individual packages of fruit snacks served in two bright colored plastic buckets. 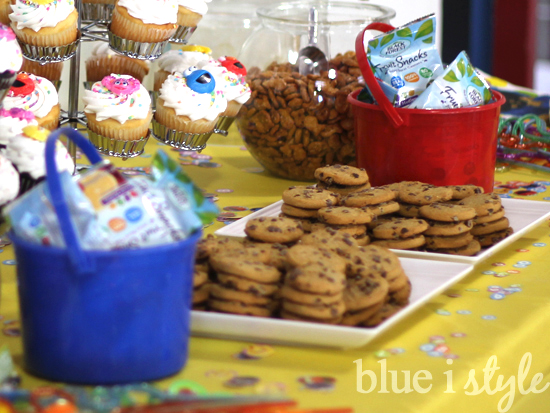 I used my two large beverage dispensers to serve “Refreshing Water” and “Nutritious Milk.”  {I love these dispensers because they have enclosed ice chambers in the middle that keep drinks cold without watering them down.} I created the street sign labels for the drinks and the food in Photoshop. 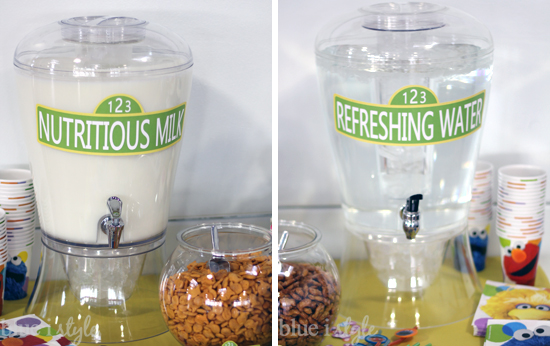 All of the paper goods came from Party City, where I also found the fun Sesame Street curly straws that the kids were able to use and then take home. 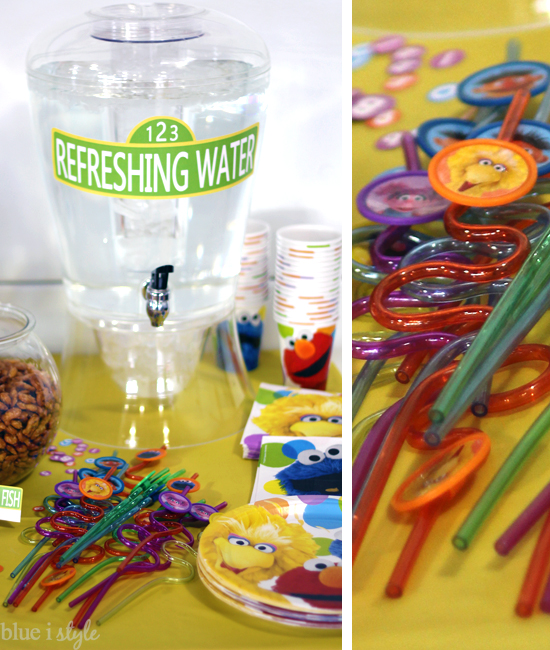 The rec center multi-purpose room was large enough for us to set up seven tables, and still have plenty of open floor space for the kids to sit down for story time. 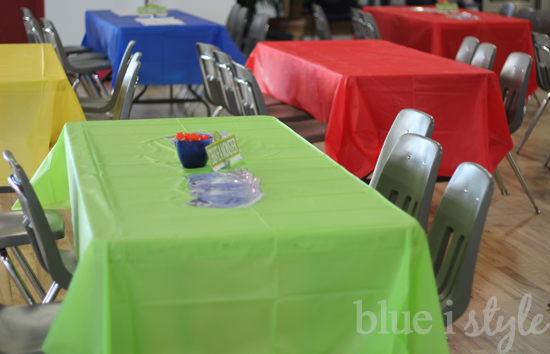 We arranged with one of Beckett’s favorite preschool teachers to read books to the kids {including a lesser known book that is a big hit in our house, “Beckett and the Pandamonium”} and to sing songs with them. 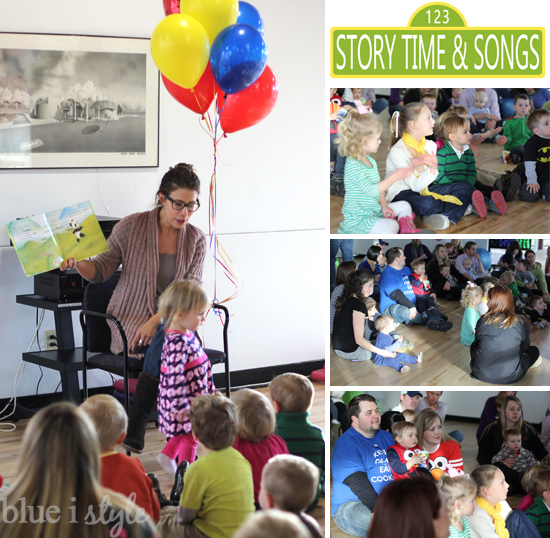 The story/song portion of the party lasted about 30 minutes, and Beckett loved every minute of it. 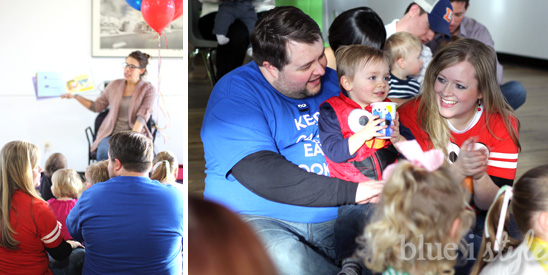 I was really impressed with how well the large group of kids did at settling down and intently paying attention for the entire story time! 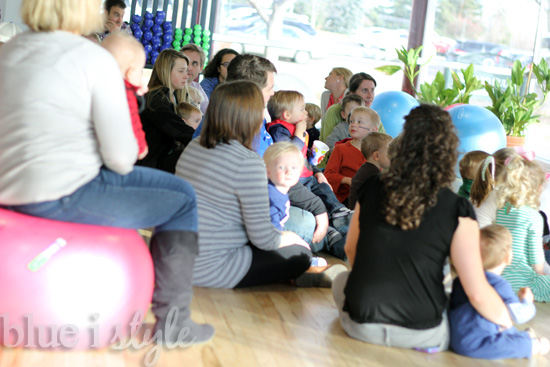 After story time, we invited all of the kids to get creative! Two of the tables were set up with coloring pages and crayons.  I downloaded the coloring pages directly from SesameStreet.org. 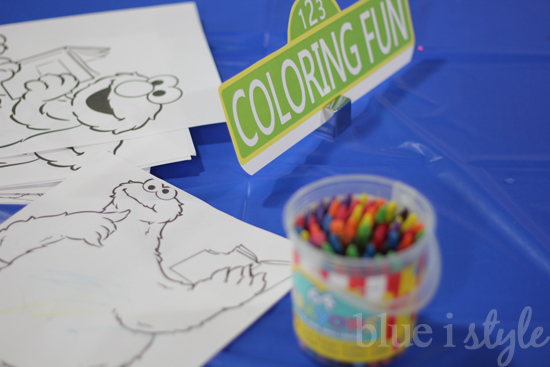 There are many, many coloring page options available on the website, so to tie in with the story time portion of the party, I chose to print pictures of each of the Sesame Street characters reading books. I also printed a handful of coloring pages with the letter B and the number 2 (as in, “This party is brought to you by the letter B and the number 2”). 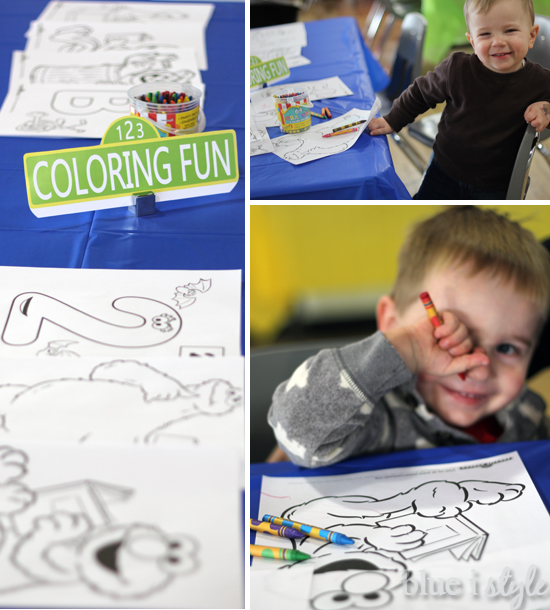 I also created a simple craft project for the kids that proved to be quite popular. Individual Ziploc bags contained all the pieces for either Elmo or Cookie Monster’s face, and I provided glue sticks for the kids to put them together. {Click here for a tutorial on creating this craft project.} 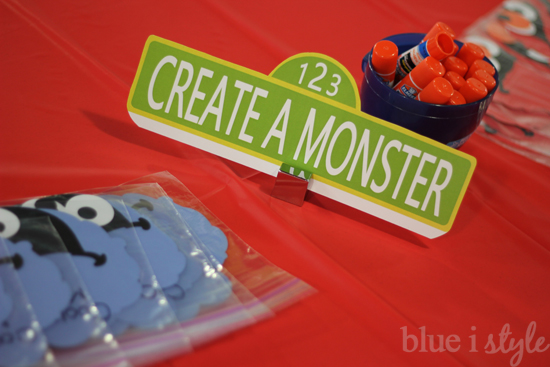 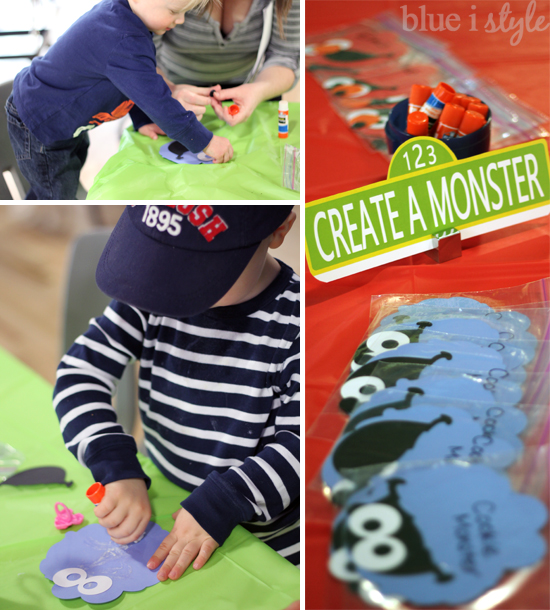 The final birthday party activity was another DIY project – the bean bag toss, the instructions for which I shared on the blog last week. 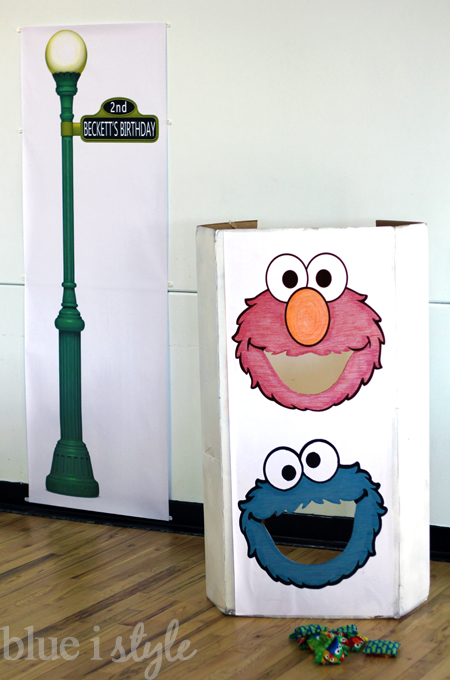 Of course, in true kid fashion, Beckett and his friends found another way to play that was equally entertaining, and the bean bag toss game ended up doubling as a photo op with kids peeking through the mouth openings. 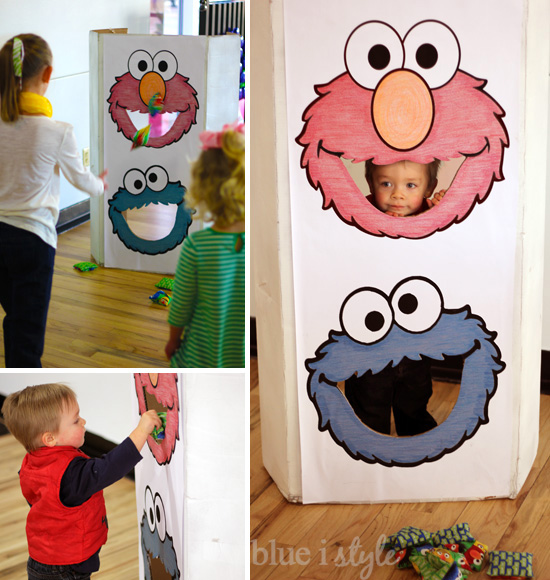 It was an action packed hour and a half, and a good time was had by all! I can’t believe that in just five more months we’ll be celebrating at Cooper’s first birthday party!  I’d better start planning that soon…the thought of that makes me want to take a nap!