On Monday, I shared my sad story of Beckett’s birthday party being cancelled last weekend because the rec center employee who was supposed to be there for our after-hours rental never showed up. We were locked out and had to turn thirty kids away.  But tomorrow is take two, and we expect that this time the party will go off without a hitch. {Fingers crossed!!}

Since Beckett absolutely loves Sesame Street, it was an obvious choice as the theme for his party this year. I wanted to keep all of the party activities simple and fun for the two-year old crowd. In addition to story time and a simple craft project, I thought a bean bag toss would be perfect. I found a small option available on Amazon, but it wasn’t what I really wanted, so I figured out a simple way to make my own. 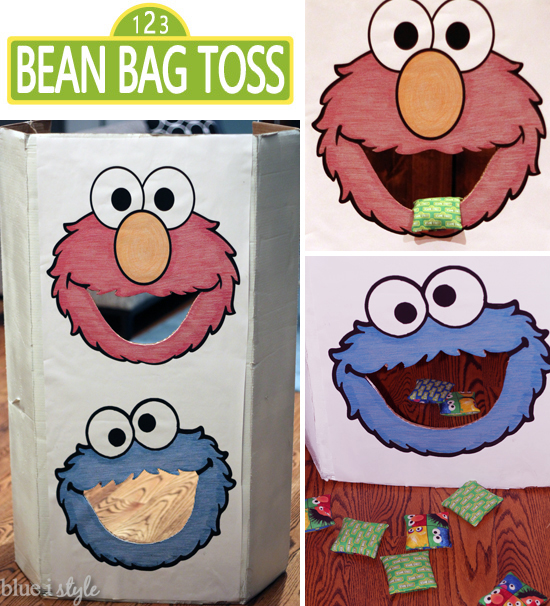 Since the party planning was happening right around Christmas, we had a number of packages delivered to the house, including several large boxes.  As I was breaking down the boxes for recycling, it occurred to me that one of them would be perfect for the bean bag toss game I wanted to create.  With the ends cut off, the folds made the cardboard stand up very stably.
I wanted two Sesame Street faces for the bean bag toss, and decided on Beckett’s favorites – Elmo and Cookie Monster. I downloaded two coloring pages from the Sesame Street website, and then used Photoshop to crop them down to just the faces and resized them to fit on the large, flat side of the box, one above the other (the total size with both faces was approximately 18 inches wide by 45 inches tall).

Since this required a large format print job, I opted to print the faces in grayscale rather than color. The price difference is astounding! For large format color prints at Kinkos, the cost is $7.99 per square foot, versus only $0.75 for large format black and white prints. By printing the faces in black and white, my total cost was only $6, whereas if I had printed the faces in color it would have cost me $64. Not a difficult decision there! And with the help of my box of Crayolas, I was able to color the faces myself and had some fun in the process (leading me to wonder why adults don’t color more often?!) 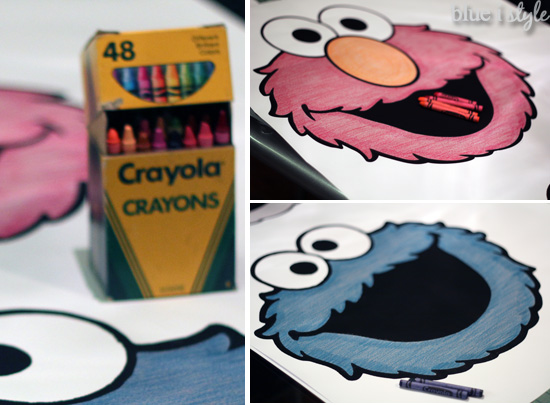 Next it was time to prep my box.  It was not in great condition, with nicks and scratches in it, and tape that I opted not to remove for fear of further damaging the cardboard.  But a coat of white primer and a coat of white spray paint later, and the box looked much better. Still not perfect by any means, but good enough to serve its purpose, especially since the majority of the damage to the box would be covered by the paper with  the faces of Elmo and Cookie Monster. 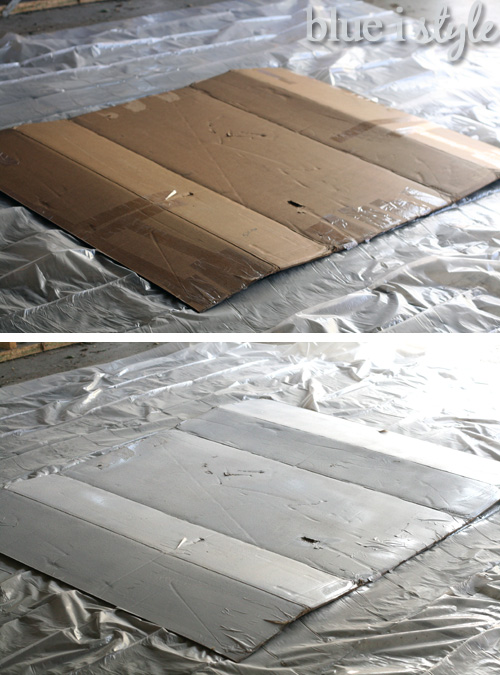 To mount the paper to the cardboard I used a can of Krylon Spray Adhesive. 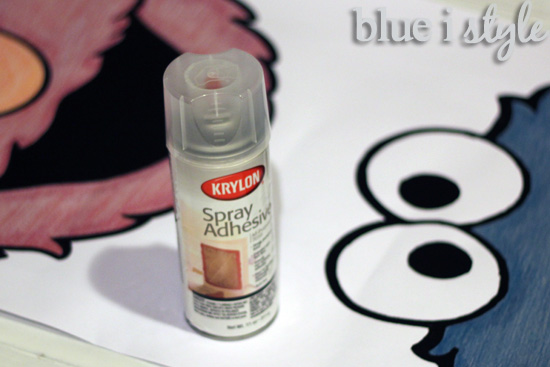 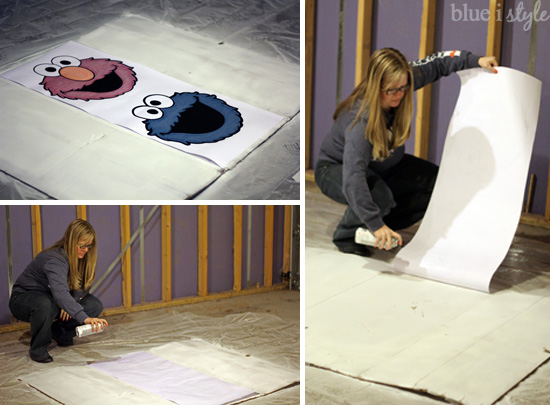 At this point I took a break in order to allow the spray adhesive plenty of time to dry. After dinner, I stood the cardboard upright and embarked on the final step – the part I had been dreading. I expected it to be quite difficult to cut the cardboard while maintaining the smooth shape of the furry curves around the mouths. But as soon as I started to cut with my Exacto knife, I realized that it was actually going to be a very quick and easy process. It only took me a few minutes to cut out Elmo’s mouth and then I was able to easily remove it, leaving nice smooth edges. 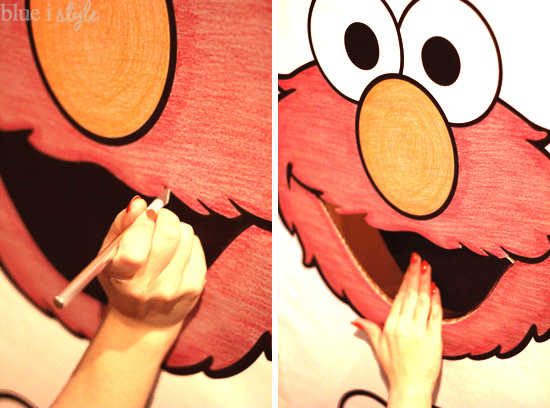 With Elmo complete, I turned the cardboard upside down to put Cookie Monster’s mouth at an easier height to work with. Just a few more minutes later, and Cookie’s mouth was also fully cut and removed. 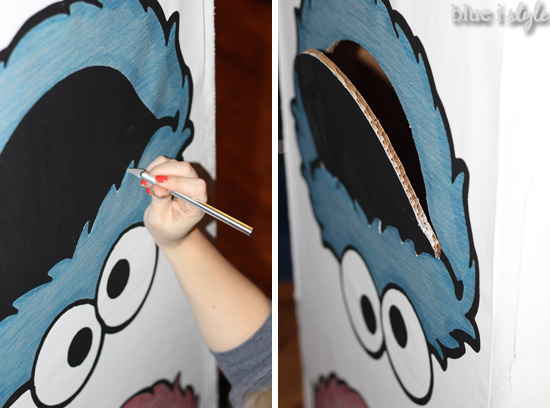 My mom had some Sesame Street fabric left over from a project she is working on for Beckett and Cooper, so she offered to make the bean bags for me.  Each bean bag has four Sesame Street character faces on the front, with street sign fabric on the back – half with a blue background, and half with green, making it easy for two people to play while keeping track of whose bean bags make it through Elmo and Cookie’s mouths. When my sister and I were young, my mom would fill bean bags with pinto beans, but she later learned that pinto beans will eventually rot and the beans can get worms {gross!}. After doing a bit of research, she discovered that a better option for filling bean bags is popcorn kernels.

I wanted to test out the final product to make sure it wouldn’t tip over when hit with a bean bag, so I challenged Scott to a friendly game of bean bag toss. Fortunately the 4 inch square bean bags easily fit through the mouth openings, and the cardboard stood up to the beating, never tipping over even when hit square on with a bean bag. 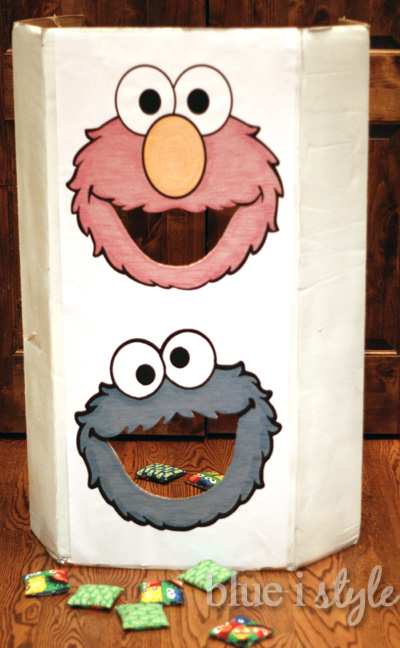 I can’t wait to see Beckett and his friends play with this DIY Sesame Street bean bag toss game at the party tomorrow! I’ll try to capture some cute pictures of them, and will share those pictures, along with all of the other party photos, early next week.