It seems like kids can find a way to make just about anything dangerous! Am I right?! Deciding what to child proof, and what not to, in your house is challenging, but the ultimate goal is to strike a good balance for your family somewhere between “bubble wrap all the things” and “fingers crossed they survive.”
Obviously baby proofing is no substitution for good parental supervision, but there are some dangers that are just too great to overlook. In our house – that danger is the horizontal railing in our second floor hallway, right between our boys’ bedrooms. 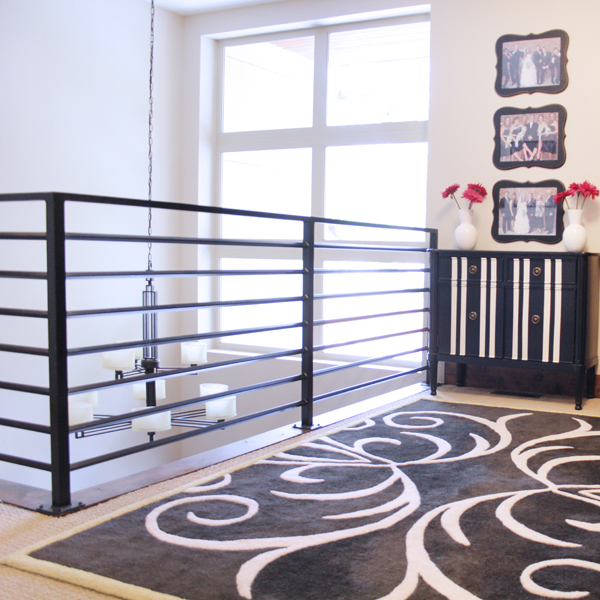 When we bought the house, this railing seemed innocent enough, but the moment we had kids, I realized it was really nothing more than a ladder begging little boys to climb it… and then fall to the first floor.
Not only is this a serious danger, it’s also one the kids won’t outgrow quickly. I can see this railing being just as much a climbing temptation to an 8 year old as it is to a 2 year old. Which is why we knew that we HAD to find a way to child proof this railing in a manner that we could easily live with for many years to come.

This post contains affiliate links. If you buy something that I recommend, you pay the same price, but I may receive a small commission.

One thing that I quickly learned about baby proofing is that there are a lot of options to choose from, but find products that actually work for the configuration of your house can be a major challenge.

Take baby gates for example. Putting a gate on the stairs is one of those baby proofing staples, especially in a house with three sets of steep, 20 step staircases! But finding gates that actually working on our stairs proved a huge headache! 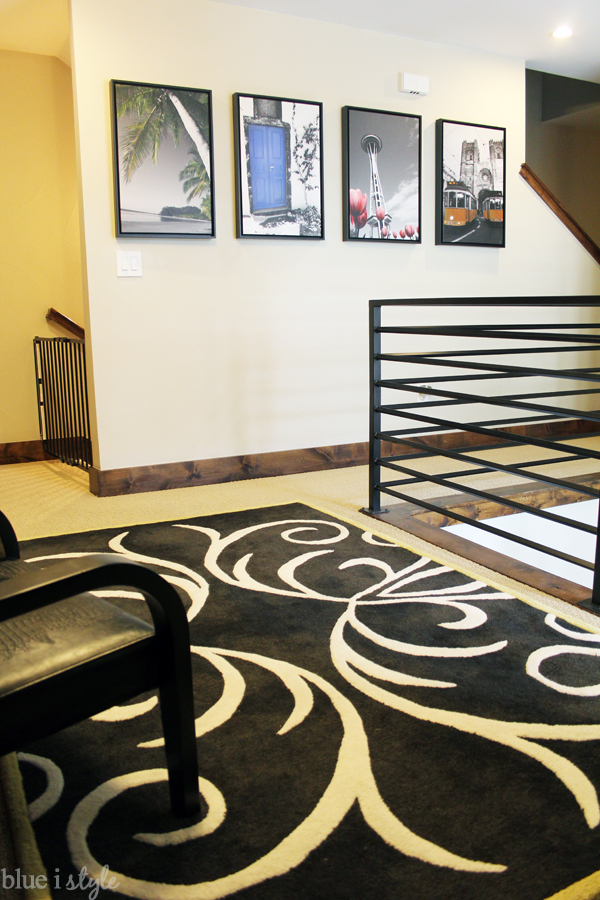 Most safety gates can’t attach properly at an angle – but due to the height of our baseboards and the positioning of our hand rails, an angle was a must. I finally found super sturdy option that gave us the flexibility we needed and we installed these baby gates on all three sets of stairs in our house.

Thanks to these gate clamps {which we painted black} we were even able to attach a gate to our black banister without drilling into our metal railings.  Best of all, the latches on these gates are secure enough that the kids have never been able to crack them! 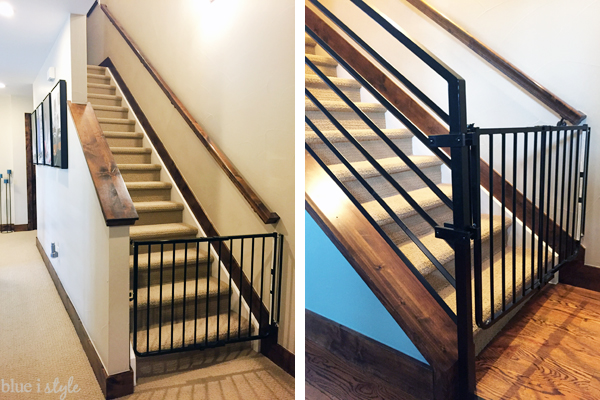 Options also abound when it comes to ways to child proof railings. One popular product is a railnet – basically a netting that your stretch around the inside of railing. While this probably works great for vertical railings because it would stop kids from putting their head between rails that are spaced too far apart or from dropping toys through, netting is stretchy and really wouldn’t be able to stop a kid from putting their feet on the horizontal rails if they were determined to climb. 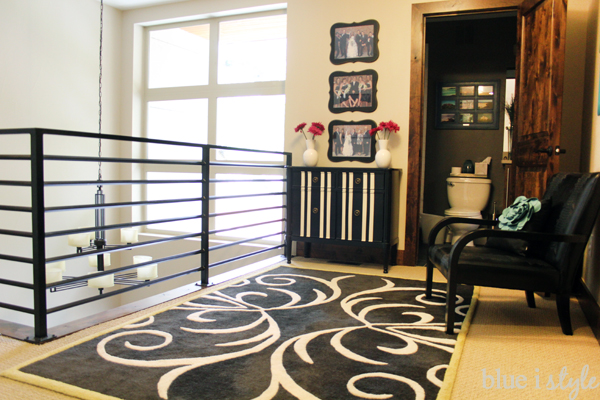 Finally I found the perfect solution for our horizontal rails – a roll of thin, durable, shatterproof, clear plastic that creates a shield around the railing while maintaining an unobstructed view!
I measured the length of our railings, and then ordered a 15 foot roll of the banister shield. 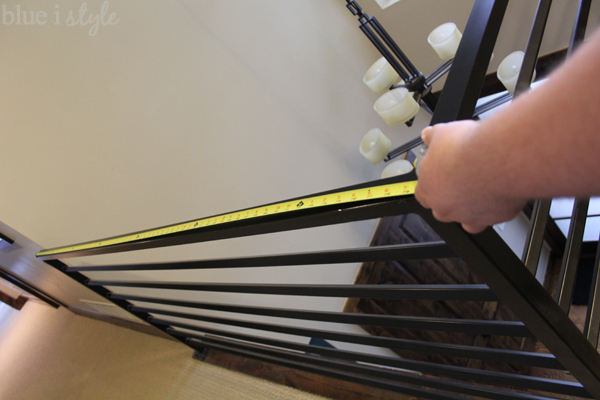 You’ll notice that the roll looks to short for our railings, but it’s actually just the right height to cover the span from the top rail to the bottom rail, leaving just a small gap uncovered below the bottom rail and the floor. The roll of plastic is 33 inches tall. 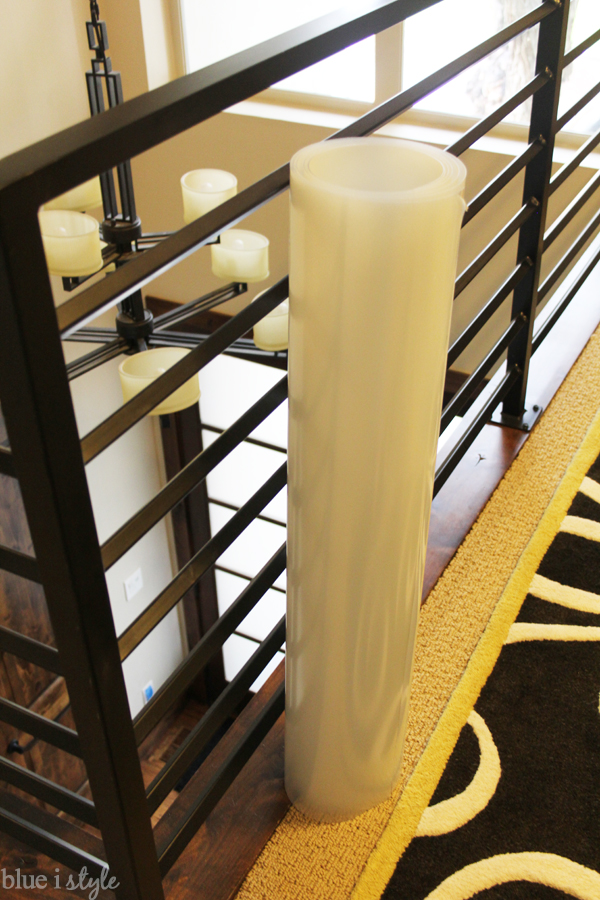 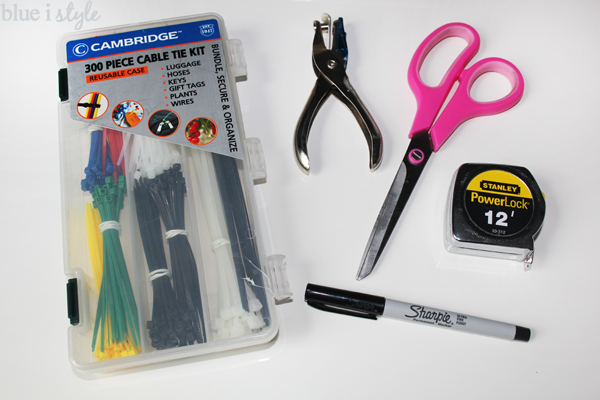 How to Install Banister Shield

We started by unrolling the banister guard and measuring the length of one side of our railing. We marked the length using a Sharpie and used a yard stick to mark a straight line. Be sure to draw your Sharpie line on the side of the plastic that is covered in a removable, protective film. 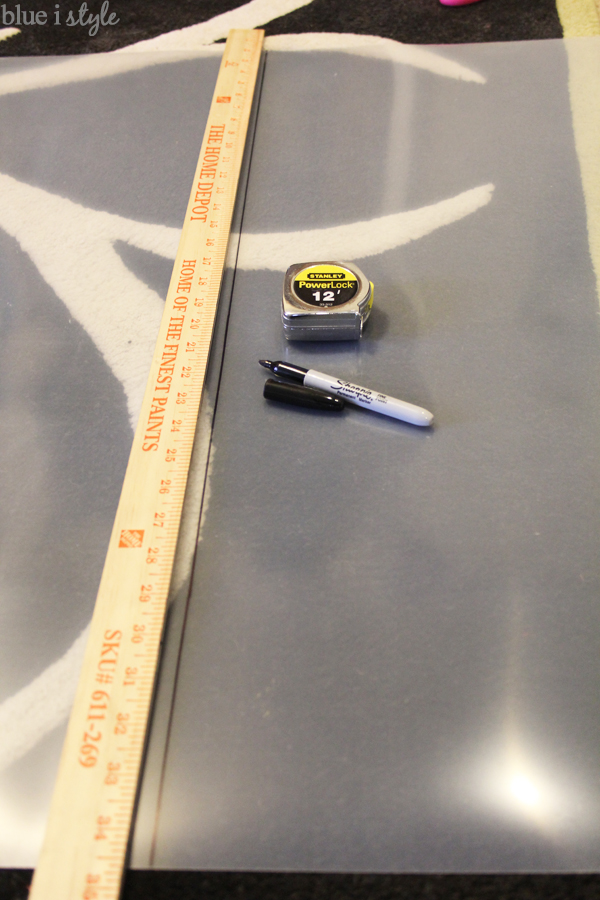 The plastic is very easy to cut through with just a basic pair of scissors. 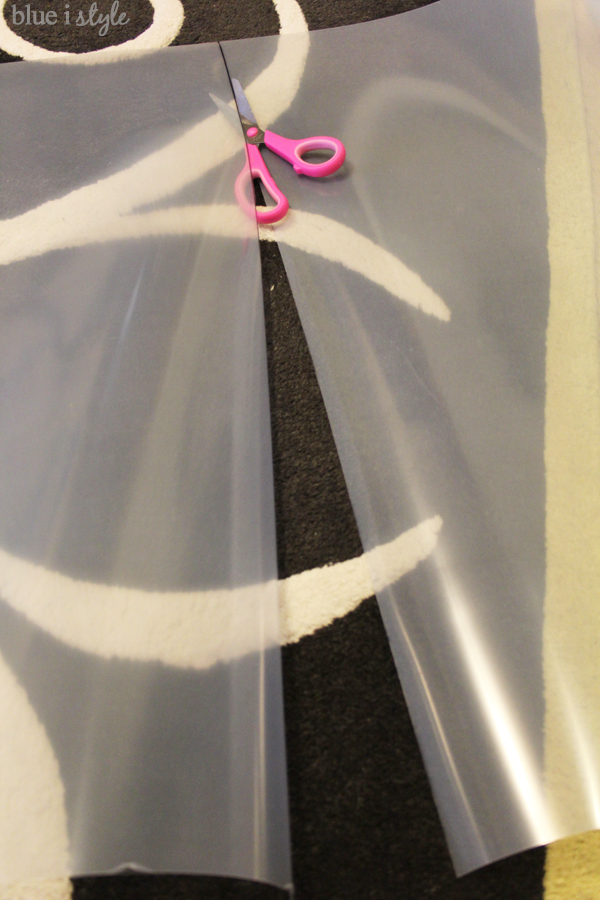 The process of installing the banister guard is quick and simple. Use a hole punch to create holes in the plastic and use zip ties to secure the plastic to the railing. Be sure to place the side of the plastic with the protective film on the outside, so that you can easily remove it after installation. 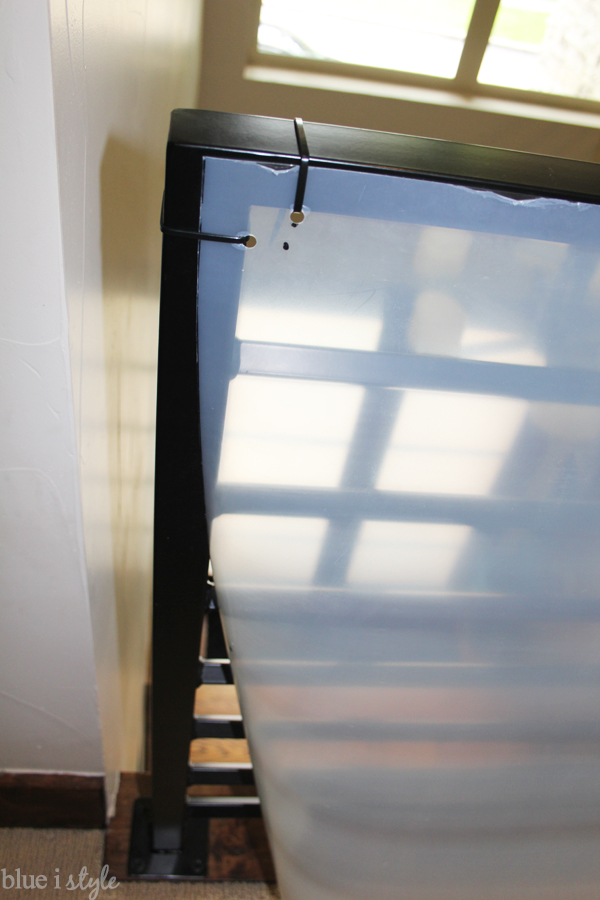 Installing the banister guard is easiest with two people – at least until you get the top corners secured in place. You’ll need one person to hold the plastic in place while the other person uses the Sharpie to mark the location for punching the first two holes for wrapping zip ties around the top rail and side rail {as illustrated in the photo above}.
Once you have the top corners secured, flatten out the banister guard, and mark the spots that you’ll attach the banister guard along the sides and bottom of the railing. Once again, don’t worry about leaving Sharpie marks, because you’ll later remove the protective film. 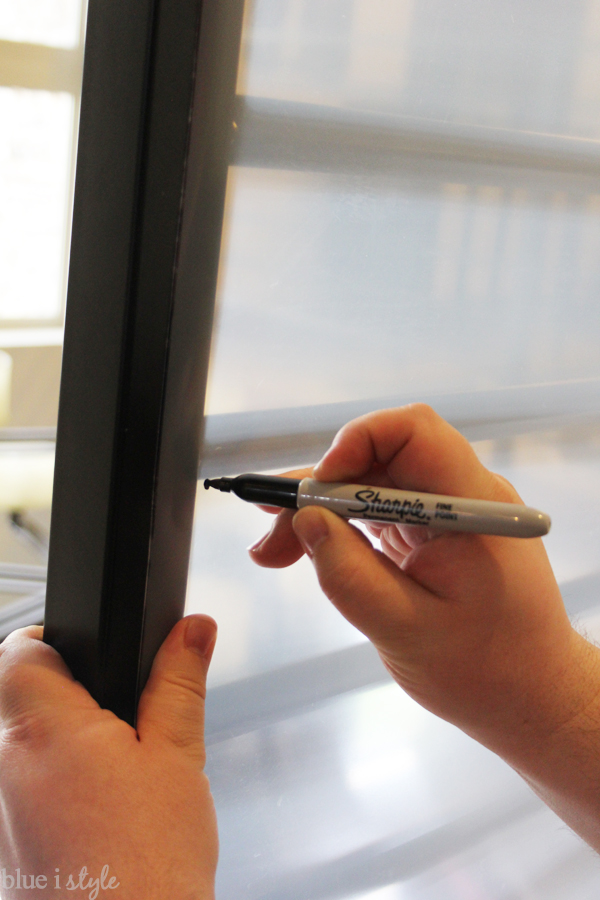 Use a hole punch to create a hole in the spot you marked.
When I purchased this plastic, it did not come with a hole punch, but more recent reviews on Amazon mention that it comes with a flimsy hole punch that doesn’t work very well. I recommend using your own hole punch. We used a standard one from an office supply store and had no problems. 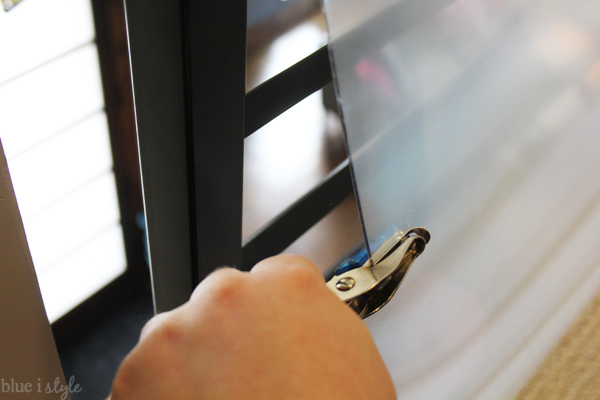 Then wrap a zip tie through the hole and around the side rail. 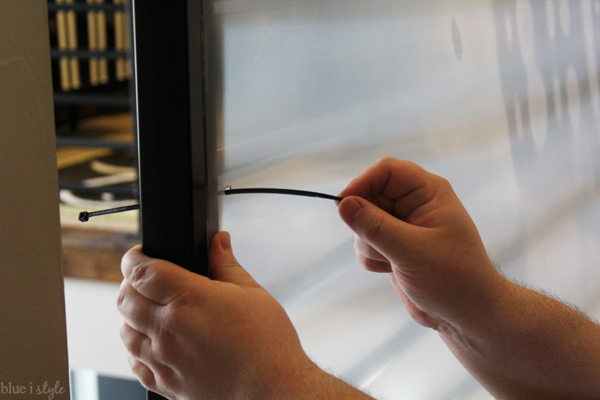 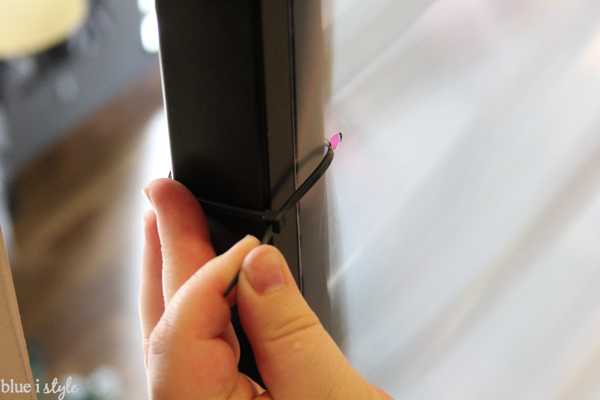 You’ll want to make sure the zip tie is tightened as much as possible, so use a pair of pliers once you can’t tighten it any more by hand. 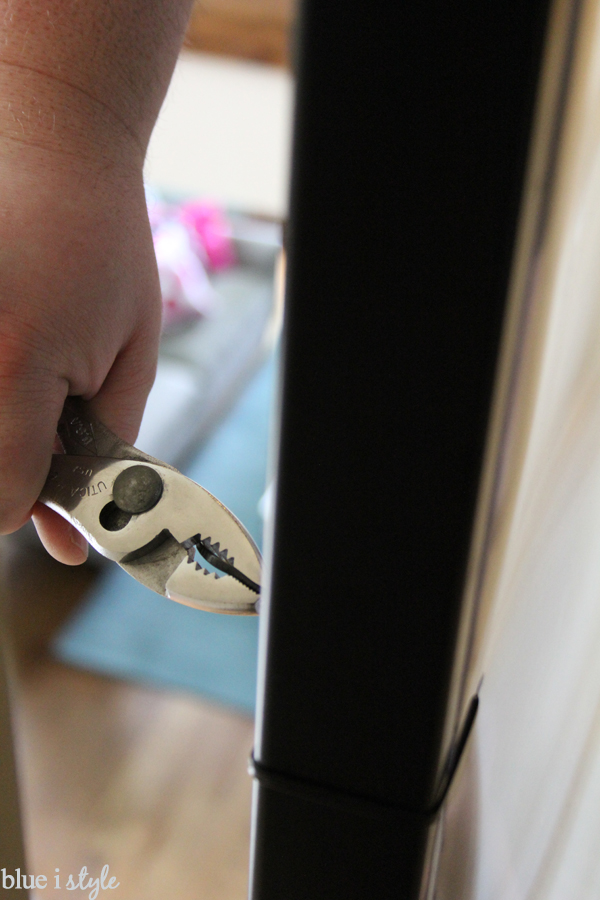 Once the zip tie is secure, use your scissors to trim of the excess. I recommend positioning the trimmed end on the outside of the railing to ensure that there are no potentially sharp spots in reach of little fingers. 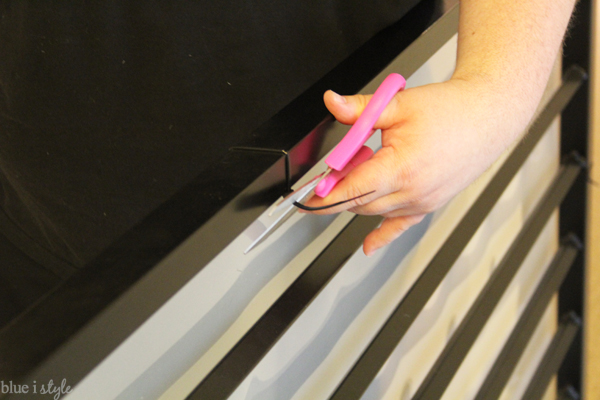 With both sides of our railing covered in the plastic banister guard, but before protective film was removed, it looked like this… 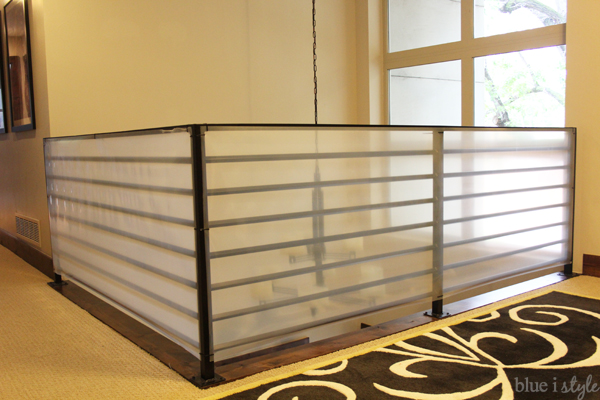 After the installation was complete, we were ready to remove the film. Starting in one corner, we slowly peeled away the film to reveal the crystal clear plastic. 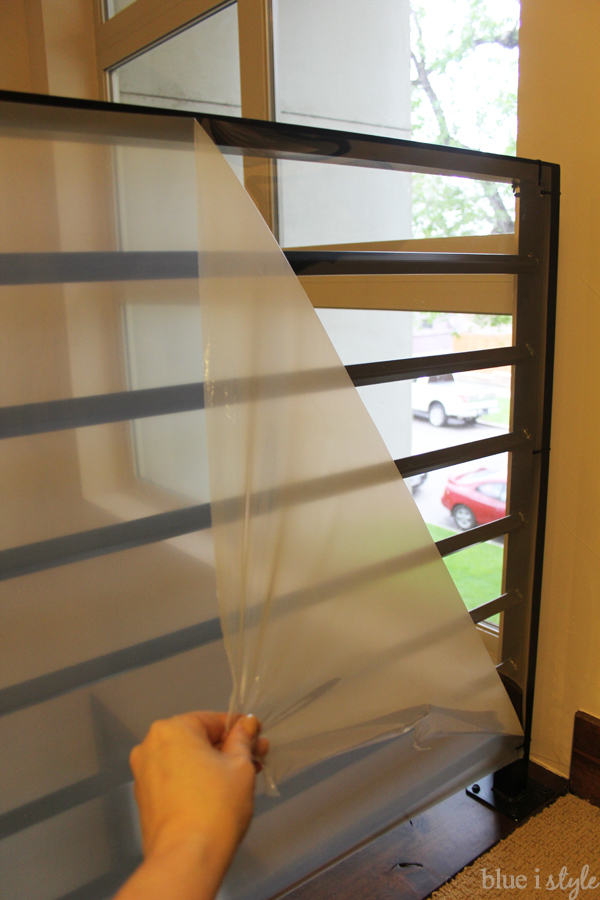 With the film removed from the right side, but not yet the left, you can see the drastic difference. On the right side, the plastic banister guard is almost invisible, but for a few reflections here and there. 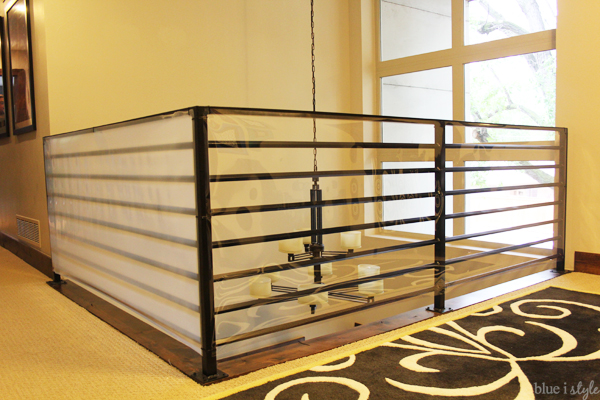 Now I don’t have to worry at all about the boys climbing these railings! 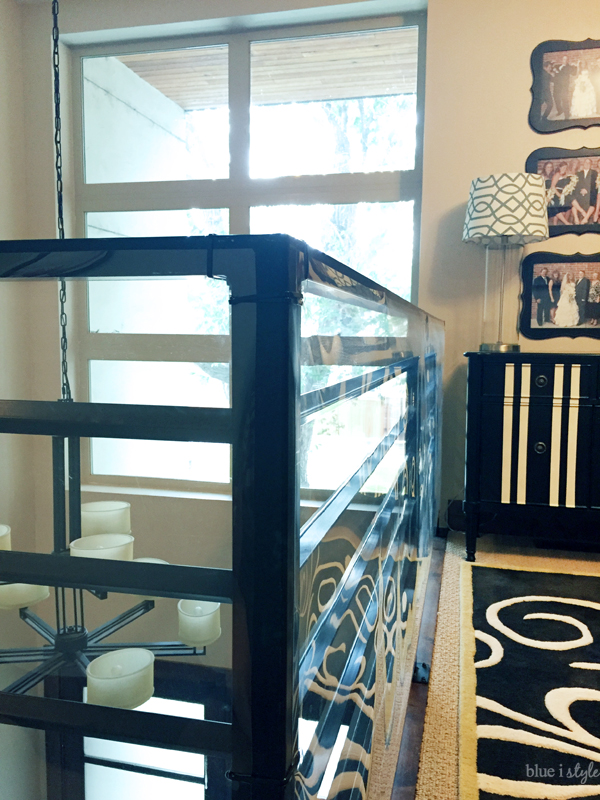 Of course you know that I love solutions that are both functional and stylish, so it’s a great added bonus that the clear plastic banister guard isn’t an eye sore. It is nearly invisible, and even the zip ties virtually disappear against our black metal railings. 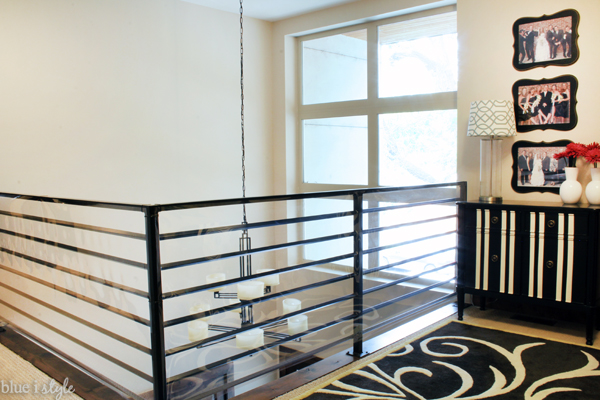 It’s so great having piece of mind that these two little men can safely run and play in this hallway and without the temptation of climbing the horizontal railing. 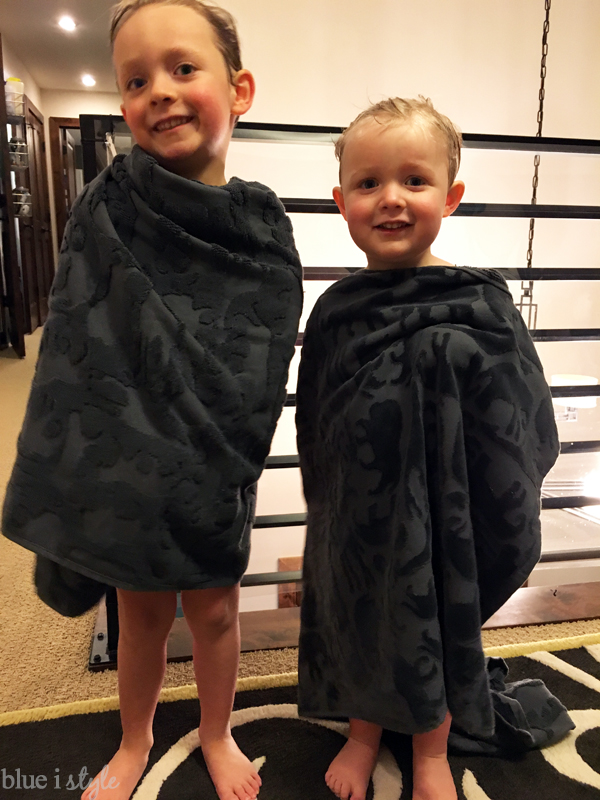 I used to look at that railing and see nothing but a dangerous ladder, but now I can rest easy knowing it’s impossible to climb! 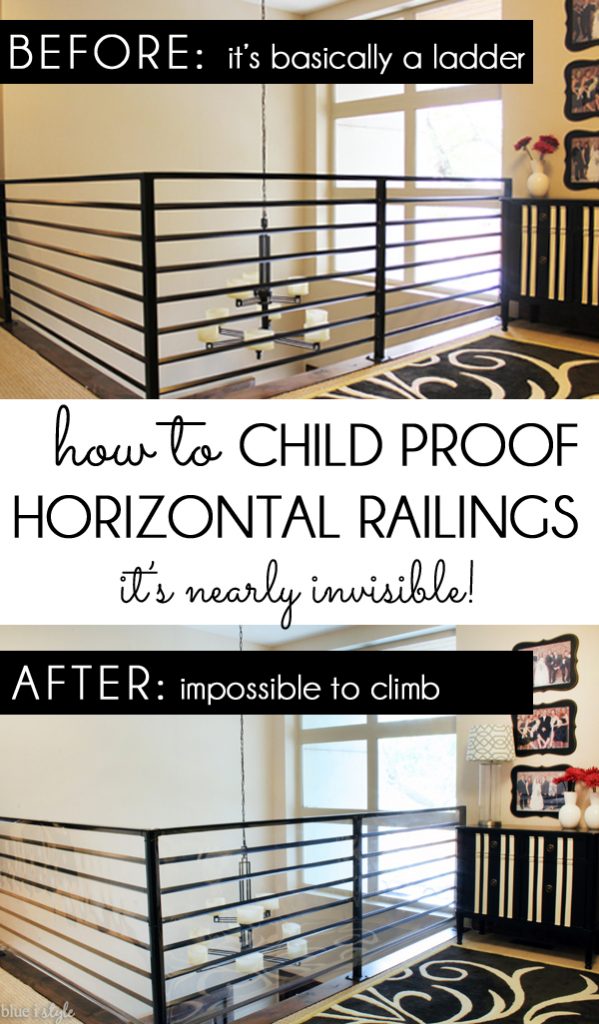 December 2019: We’ve had this banister shield in place for five and a half years. Our boys are now six and eight, and I trust them not to climb the railings, but since we still have friends with younger kids visit often. The railing shield still looks as good as new – meaning it’s still nearly invisible – so I don’t plan to take these railing guards down anytime soon.

I get emails and questions about this banister shield fairly often, so I thought it would be helpful to address some of the FAQs here: 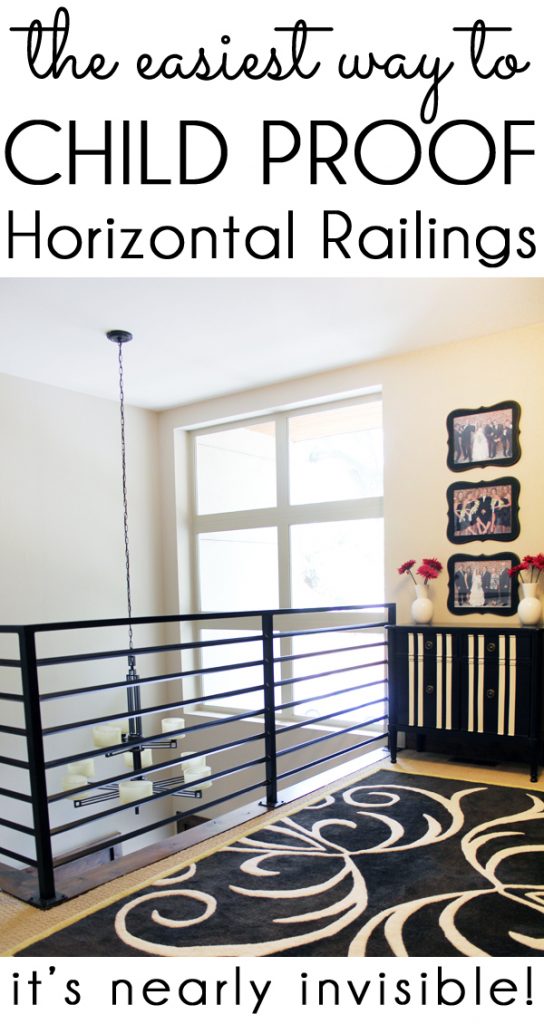