This week, I got to chaperone my first school field trip and join Beckett’s kindergarten class on a trip to a farm for tractor rides and harvesting vegetables. We had such a great time, but little brother Cooper was very disappointed that he didn’t get to join us. After all, he is the one who wants to be a farmer when he grows up. {Well, a farmer, a superhero, a construction guy, a fireman, married, and a dad, if you really want the full list of his future plans.}
With all the talk about farms this week, I was reminded that I’ve been wanting to show you the adorable cupcakes that I made for Cooper’s third birthday last year when we had his party at a little farm in town! 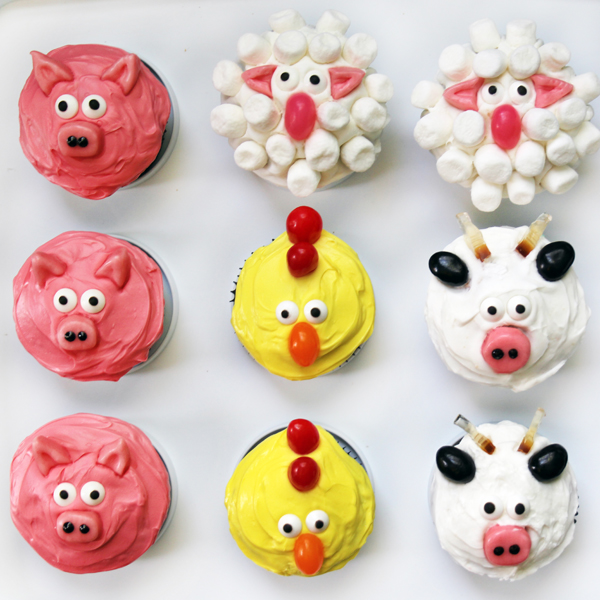 These cupcakes were completely Pinterest inspired, and I don’t normally share things on the blog that I made from someone else’s original idea, but in this case, I kept finding the same image all over Pinterest leading back to a photo upload site, but with no details or instructions provided anywhere. Since I couldn’t find a list of supplies, I spent way too much time wandering up and down the candy aisle at the grocery store trying to figure out what I could use to make the noses, ears, and horns for each animal.
So, to save you a little time and make these cupcakes as quick and easy as they should be, I wanted to provide the list of the candy I used. Of course, you can certainly make substitutions, but it’s always nice to have a starting point, right? 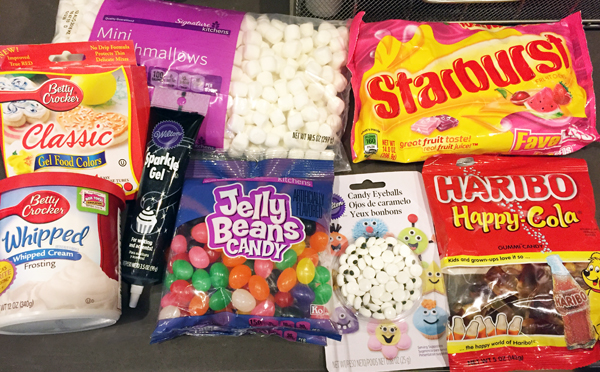 Candy Eyeballs
Mini Marshmallows – for sheep
Starburst – pink for pig and sheep ears, and pig and cow noses
Jelly Beans – various colors for beaks, ears, and noses
Haribo Happy Cola – for cow horns
I started by baking a dozen cupcakes. While the cupcakes were in the oven, I scooped about half of the frosting out of the can and divided in into two bowls. In one bowl, I added yellow gel coloring {for the chickens}, and in the other I added red {for the pink pigs}. 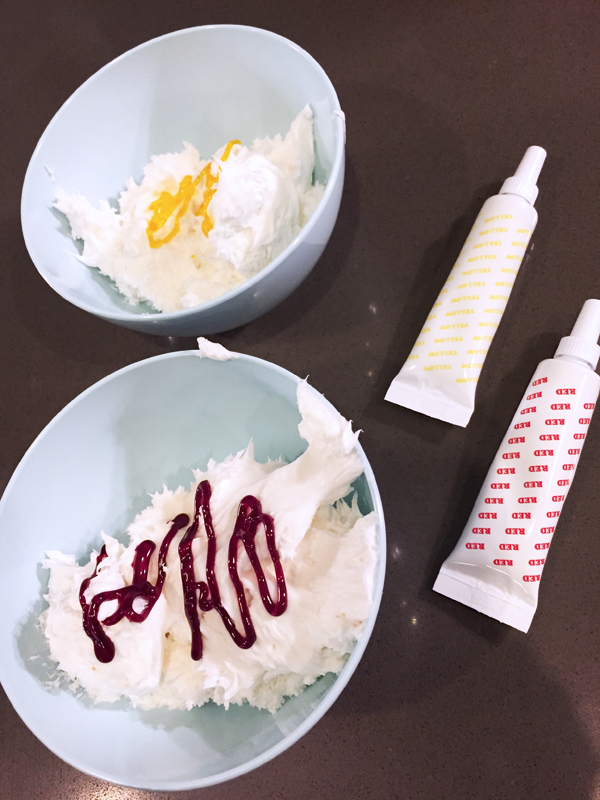 When making pink frosting, it’s always best to start with less red coloring, stir it up to see what shade of pink you’ve created, and then slowly add more red until you get to the color of pink you want. 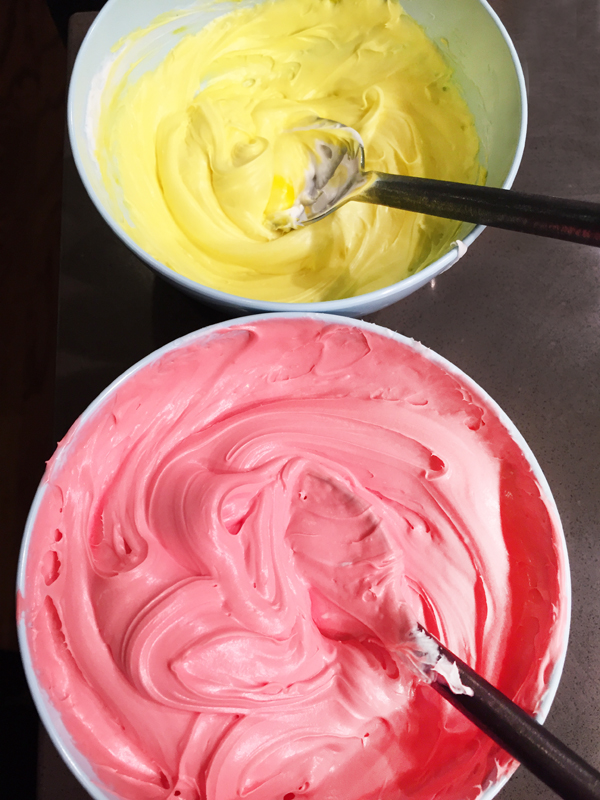 Once the cupcakes finished baking, I removed them from the pan and allowed them to cool. Then I placed them on my cupcake carrier before frosting them. I see so many pictures on Pinterest where people have decorated their cupcakes while they are still in the pan – please don’t do this friends, because then you won’t be able to lift them out without messing up all of your adorable decorations. 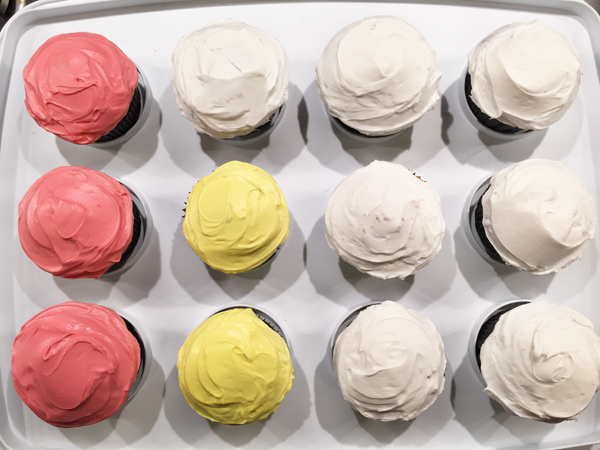 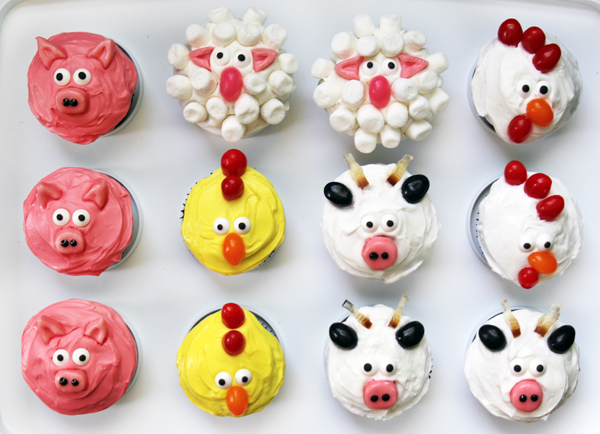 Let’s talk about the pink noses and ears first, since those were the hardest for me to figure out how to create. I used a sharp pair of fine point craft scissors, and cut ovals for the pig snouts and circles for the cow noses. 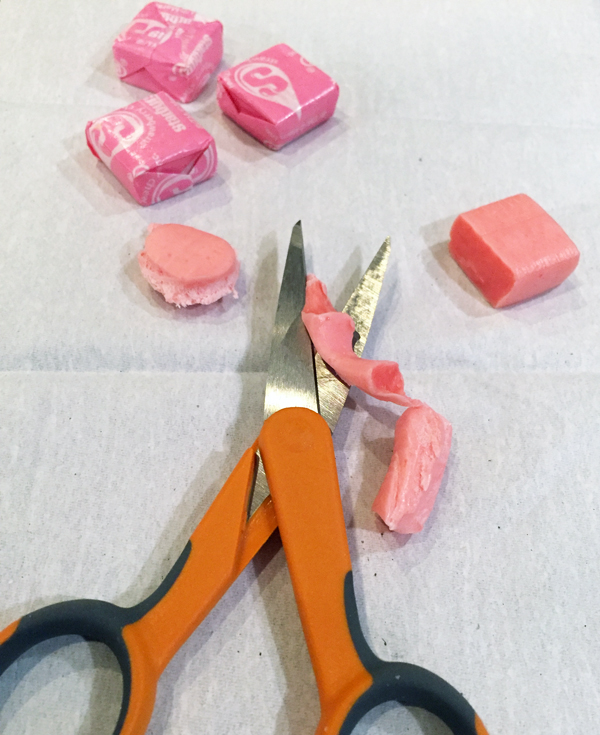 As you can see, the edges were pretty rough when I cut the Starbursts, but I was able to roll them between my fingers to smooth them out and create nice, even shapes for the pig and cow noses. 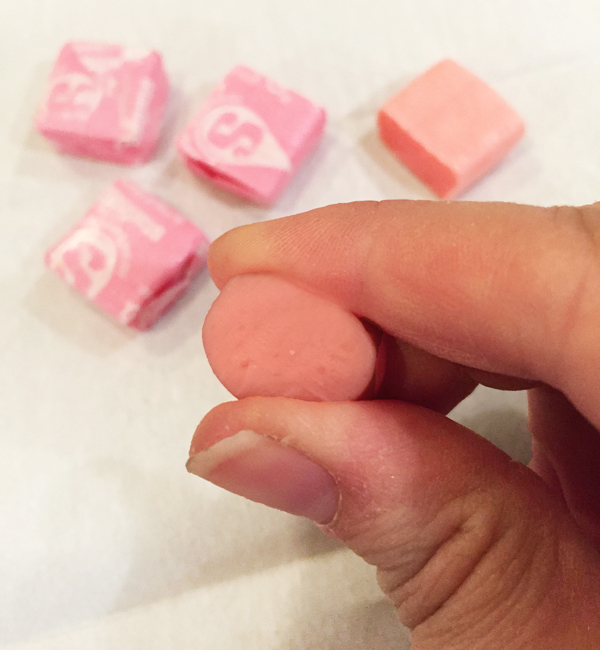 Next, I unwrapped more square Starbursts, and cut them diagonally across to create triangles. I pinched the triangles between the fingers to make them a big longer and narrower. Then I pressed the tip of my craft scissors down into the triangular ears to make very cute ears for both the pigs and the sheep. 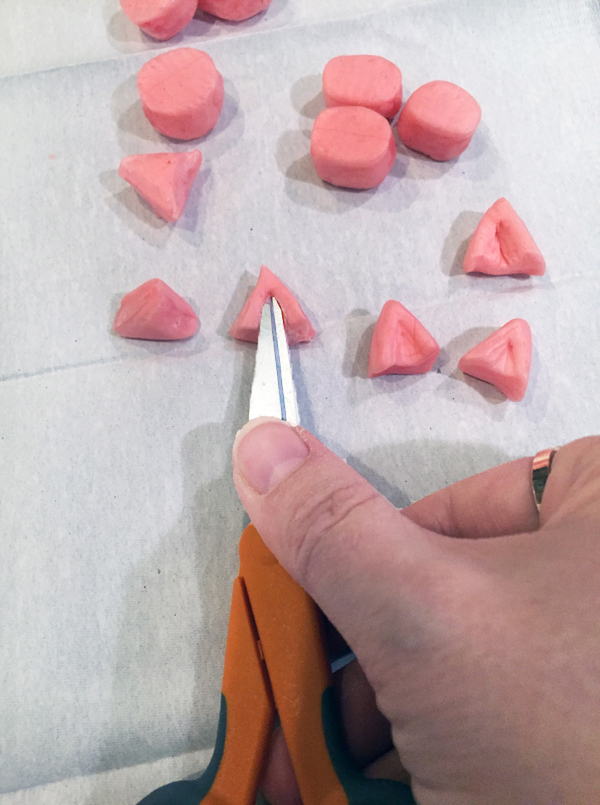 After placing the pigs’ eyes, nose, and ears, I used the black decorating gel to add two dots to the snouts. I also placed pink ears on the sheep, along with eyes and a pink jelly bean nose. Then I covered the rest of the sheep in min-marshmallows. After my first attempt, I discovered that the sheep had a much softer, fluffier look if I squished the marshmallows down a bit between my fingers before placing them on the cupcake. 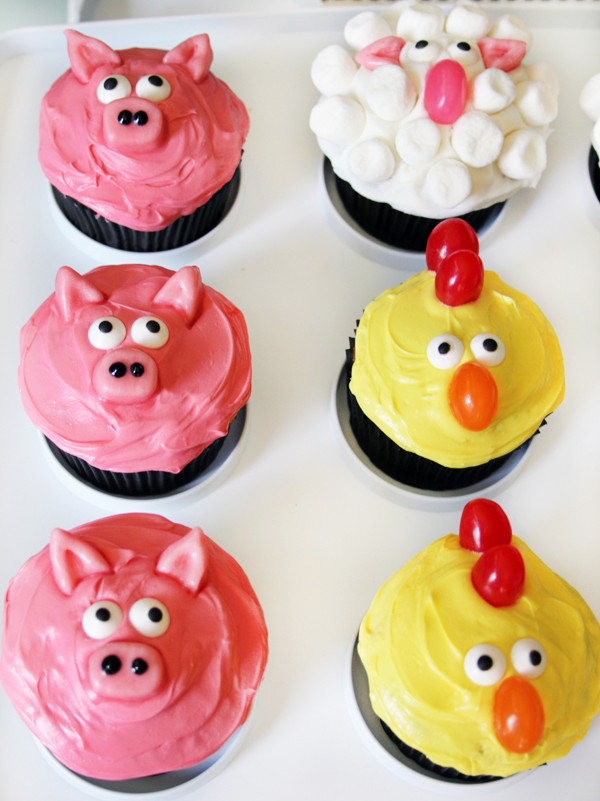 The chicken really couldn’t be any easier – two eyes, an orange jelly bean beak, and two red jelly beans for the comb. The roosters are very similar with, orange beaks, red combs, and and extra red jelly been for the wattle. 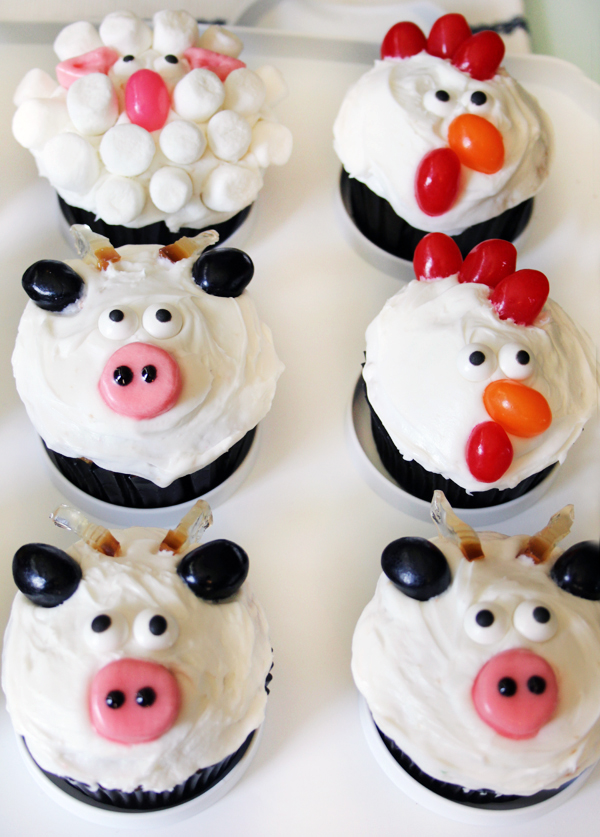 Finally, I placed the eyes and pink Starburst noses on the cows, added two black gel dots, and used two black jelly beans for ears. I planned to use the Haribo cola bottles for the horns, but they were just too big straight out of the package. Instead, I used my craft scissors and cut the soda bottles down to be quite a bit narrower – continuing to trim until the size looked right for the cows.

Baking time aside, these adorable farm animal cupcakes only took me about 20 minutes to make, but they were a HUGE hit at the birthday party. Cooper and the other kids just loved them, and the parents were so impressed with my cupcake decorating skills {in other words, I had them totally fooled}! 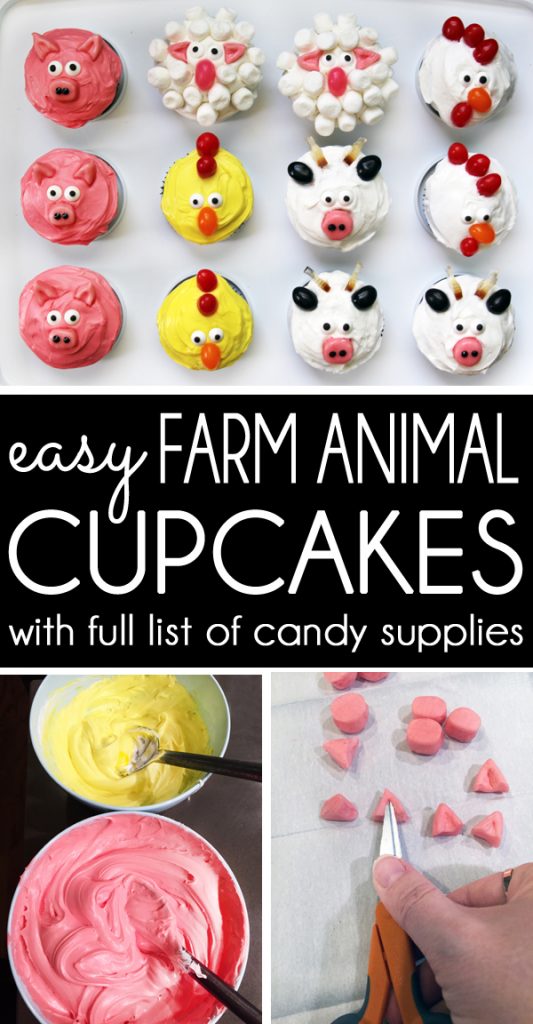 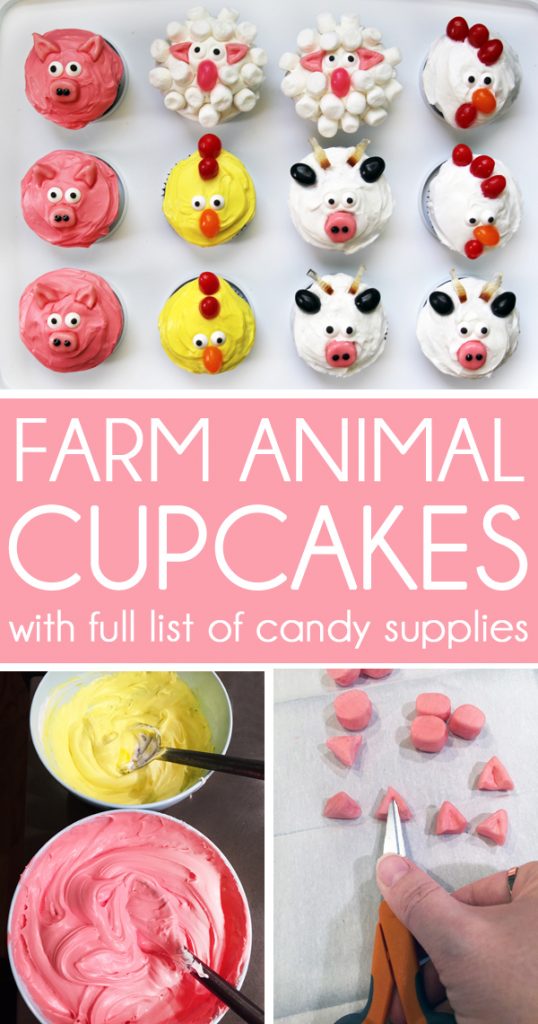