Recently I received a reader request for suggestions for a jungle themed baby shower! I was really excited by this request, because not only do I love jungle animals {as evidenced by our nursery}, but also because I have always wanted to host a jungle themed shower. This gave me a great opportunity to share a lot of the ideas that I’ve had floating around in my head for a long time.
I’m a very visual person and I enjoy the process of putting my ideas down on paper, so I created a quick jungle themed baby shower mood board that includes ideas for decorations, activities, and favors. In putting together this mood board, I took the same approach that I take any time I entertain – I strive to strike a balance by create events that are stylish and memorable without being too over the top in terms of cost or prep time. I love Pinterest as much as the next person, but let’s be real – the amount of time and expense invested in some of the uber-elaborate Pinterest parties out there can leave you feeling inadequate. But I firmly believe that you can create an amazing event without breaking the bank by creating a cohesive theme and focusing on special details.
So, without further ado, here are some fun suggestions for a jungle themed baby shower…
Now let’s break down the details:
(1) CUPCAKES. I love a cute cupcake, but I’m not one for making something really complicated because I just never have enough time in the days/hours leading up to a party.  However, these monkey cupcakes are so stinkin’ cute and look really easy to make.  They simply require two different sizes of Nilla Wafers and candy eyes, which can be purchased from Michael’s on the baking aisle.  Details on how to make these cupcakes can be found on this blog. 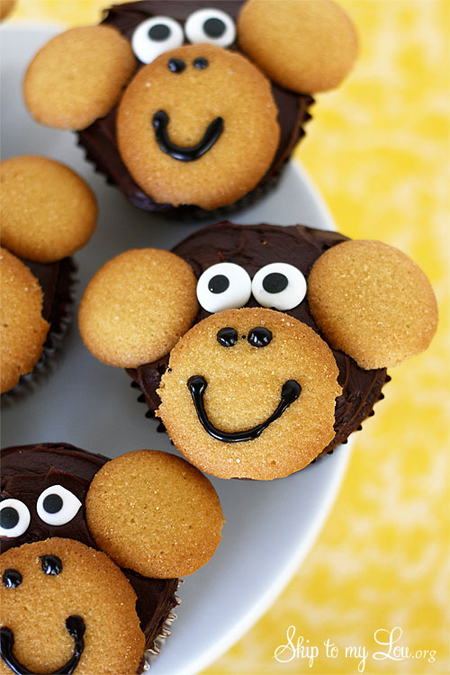 (2) ANIMAL PRINT DECOATIONS. It’s easy to find lots of decoration in the typical animal print colors (browns and blacks), but I like the idea of using brighter, fun colors for a baby shower – like these vibrant balloons with the zebra stripes and leopard spots, which can be purchased from Oriental Trading Company. Party City also has lots of cute decorations in different colors of zebra stripes, including napkins and plates, as well as paper lanterns. 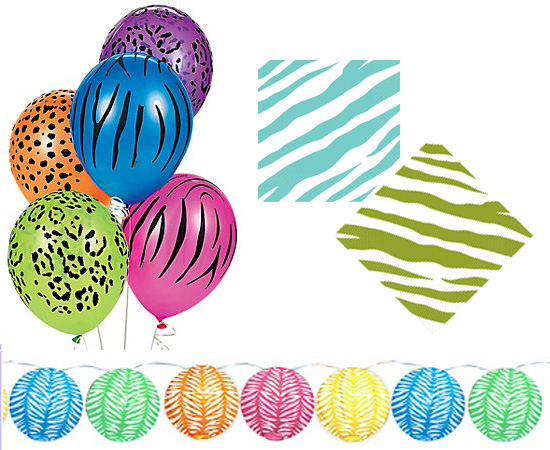 (3) MONKEYS HANGING AROUND. I have always thought it would be fun to incorporate the monkeys from the Barrel of Monkey’s game into a party.  Because of their hook-like arms, there are lots of ways that the monkeys could be used to decorate.  I think they would be cute hanging from a chandelier above a food table, and with just a quick coat of spray paint the monkeys could be made to match any color of party decor.  It would be really fun to paint each monkey a different color and to have each guest hang a monkey from their drink cup as a marker of sorts (so that you would know which cup was yours by the color of the monkey hanging from the rim).
(4) COLLECTING ADVICE & WISHES IN A BANK. I really like to incorporate items into a baby shower that the mom can keep and use in the nursery after the shower is over.  I think that an animal bank, like the silver elephant pictured, would be a great place to collect notes with advice for the mom-to-be or wishes for the baby.  The bank pictured in the mood board is from here, and the advice cards can be purchased for download here. The key would be printing the advice/wishes forms on light weight paper and small enough that they can be folded and slipped through the bank slot.
(5) DECOR THAT BUILDS BABY’S WARDROBE. Rather than a standard gift table, I like to use a cradle or basinet to corral all of the gifts.  The photo on the mood board is from this shower that I hosted, where I used my boys’ cradle and hung onesies from the front.  I put a large letter on the front of each onesie to spell out gifts (the letters were printed and cut out of sticker paper), but for a jungle themed shower I think it would be adorable to string up onesies with animals on them. Even if you don’t have a cradle that you can use, the onesies would be just as cute strung along the front of, or above, a standard gift table.  Best of all, after the shower, the onesies can became part of the new baby’s wardrobe.  The precious jungle animal onesies on the mood board are from this Etsy store.

(7) SHOWER FAVORS. I always think that one of the biggest challenges to hosting a baby shower is coming up with a favor to send home with all the guests.  For party favor ideas, I often turn to Pinterest, and one of the best ideas I came across was to put large cookies inside of CD envelopes with cute coordinating stickers on the front of each.  The inspiration photo on the mood board has elephant stickers, but I think it would be just as cute to use a variety of jungle animals and you could easily find cute sticers at Michael’s or any other craft store. 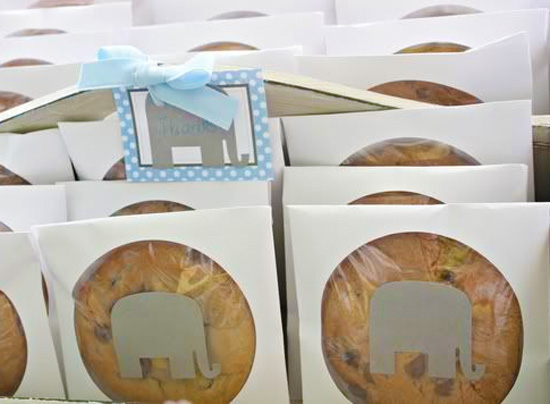 (8) PAINTED PLASTIC ANIMALS ARE ALL THE RAGE. Painting little plastic animals from the dollar store is a huge trend right now.  People are using them in all sorts of ways, including to hold jewlery.  But I think it would be a great idea to incorporate them into a jungle themed baby shower.  You could paint them in coordinating colors {or in gold – which is all the rage right now} and use them in any number of ways.  I found an awesome idea on Pinterest to paint the animals and glue them to the lids of inexensive jars. This blogger used them to create a dessert buffet at a baby shower, which is a great idea, because then the mom-to-be can use the jars in the nursery after the shower is over. 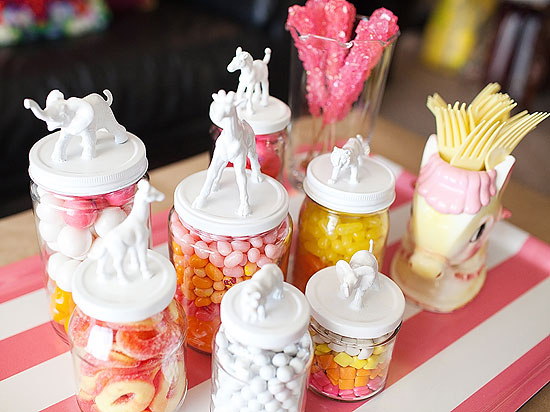 Alternatively, you could paint animals and simply sit them around on the buffet table or any other place you want to decorate, like this example. 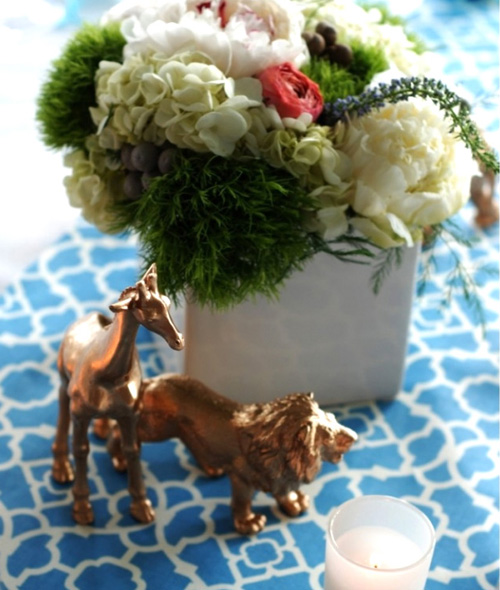 Painted animals would also make great cupcake toppers – and The Entertaining Shoppe {a new favorite find of mine} makes it easy for you by selling adorable gold animals on food safe sticks perfect for cupcakes or a cake. 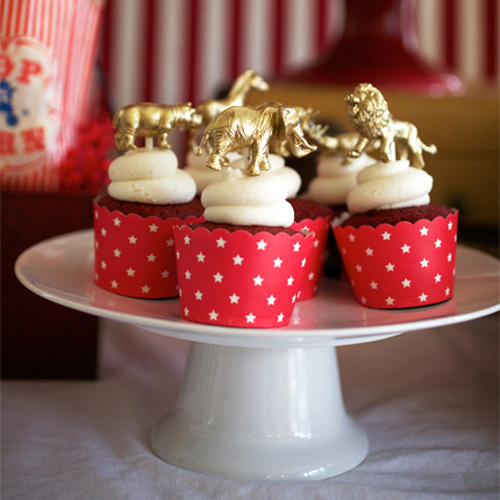 (9) GUEST BOOK. I love to give books as gifts, and often ask baby shower guests to bring a signed book instead of a card to help mom build baby’s library {I usually put language on the invitation that says: “One small request that won’t be too hard, bring a signed book instead of a card”}. Alternatively, I think it’s fun to use a kids book as a guest book. For a jungle themed shower, sit out The Jungle Book and ask all of the guests to write a note to mom and baby in the front and back covers of the book.
(10) DECORATING WITH STUFFED ANIMALS. Lastly, a simple but adorable way to decorate for a jungle themed shower would be to sit out lots of stuffed animals. These could be stuffed animals borrowed from your own kiddos, or stuffed animals that you want to gift to the new baby.  I particularly love the Cordy Roy stuffed animals from Jellycat, like the lion, elephant and rhino featured on the mood board.

So there you have it – my vision for a stylish but simple jungle themed baby shower. If you’ve hosted a jungle themed shower, I’d love to see the photos and hear about the special details you incorporated!

« {organizing with style} Kid’s Closet Pinspiration and a Plan
{featured} I Got My DIY On! »