March is National Craft Month, and to celebrate Steph of Crafting in the Rain has put together a great series called Craft Month A-Z! Each Saturday in March, a handful of awesome bloggers will be bringing you crafts for each letter of the alphabet, starting this week with A, B, C, D, E & F!
I am thrilled to be participating in this Craft Month event by bringing you a fun and easy craft that would make an awesome gift for the dog lover in your life! D is for Debonair Dog Coasters! 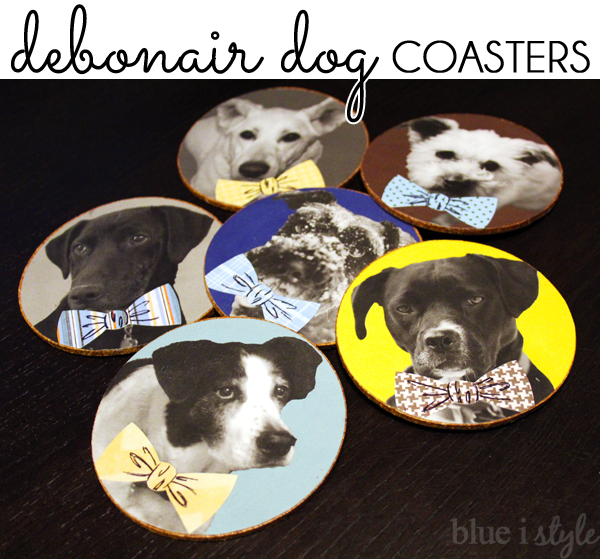 A while back, I came across an adorable set of coasters from Common Rebels. It was right around the time I was designing my son Beckett’s menswear inspired bedroom, so I was immediately drawn in by the dogs in bow ties! As soon as I saw the caosters I really wanted to order a set for Beckett, but $20 for 6 coasters was a bit too spendy for a kid’s room.
I also knew that Beckett would like the coasters even better if the pictures were of dogs that he recognized, so I decided to make a super inexpensive knock-off version for his room featuring all of the family dogs {those belonging to his great grandma, his grandpa, and his uncles}. 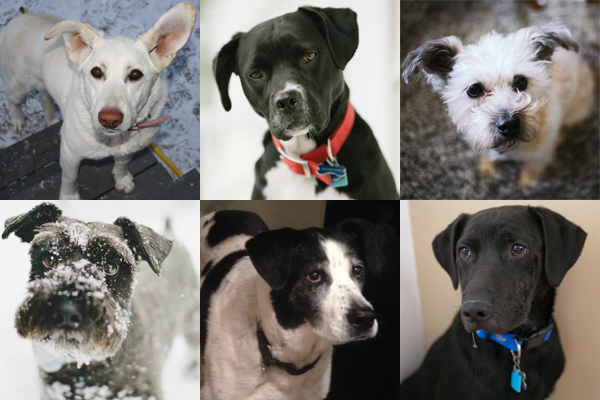 To begin, I picked up two 4-packs of Avskild round, cork coaster from Ikea for just $1 per pack. The coasters measure 3 7/8 inches in diameter.
Once I had collected photos of all these handsome pups, I used Photoshop to crop them into circles, resize them to fit the caosters, and color the backgrounds. I’ll quickly walk through those steps for those who have Photoshop. If you don’t,  you could simply size your photos on a copy machine, cut out the dogs, and paste them onto colored paper backgrounds.
PHOTOSHOP INSTRUCTIONS

I began by opening one of the dog photos in Photoshop and using the Elliptical Marquee Tool. To ensure that you get a perfect circle, select “Fixed Ratio,” and set the ratio to 1 to 1. When selecting the circle, be sure to leave enough room before the dog’s face to add the bow tie later. 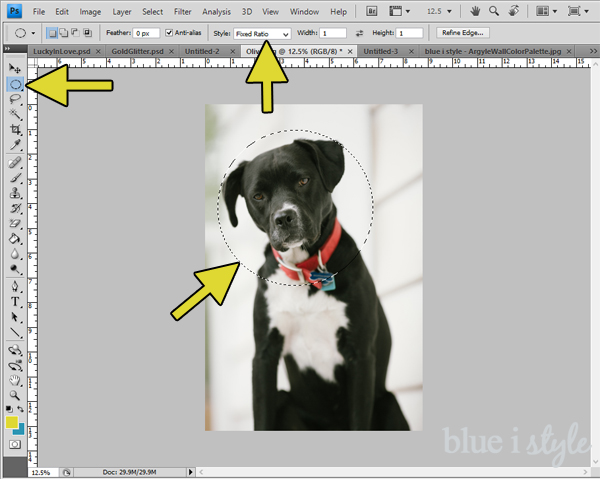 Once I had selected a circle around the dog’s face, I copied (ctrl+c) and pasted (ctrl+v) this circle into a new document (ctrl+n). Like the Common Rebels version of the coasters, I wanted the dogs to be black and white on colored backgrounds, so I adjusted the photo to black and white. 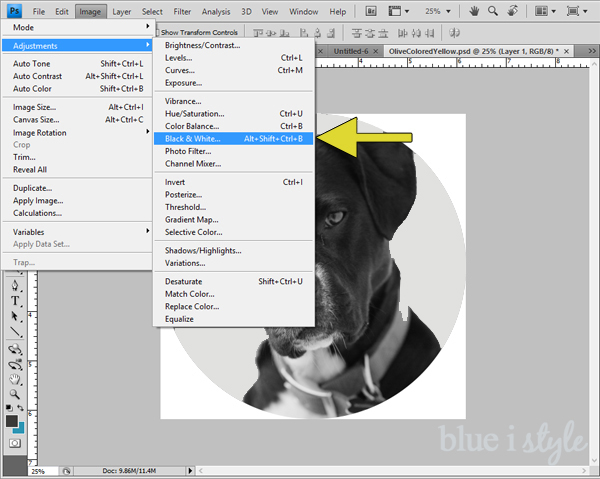 Next, I selected just the background area. I used the the Magic Wand Tool and clicked on the areas around the dogs face until the entire area was selected. 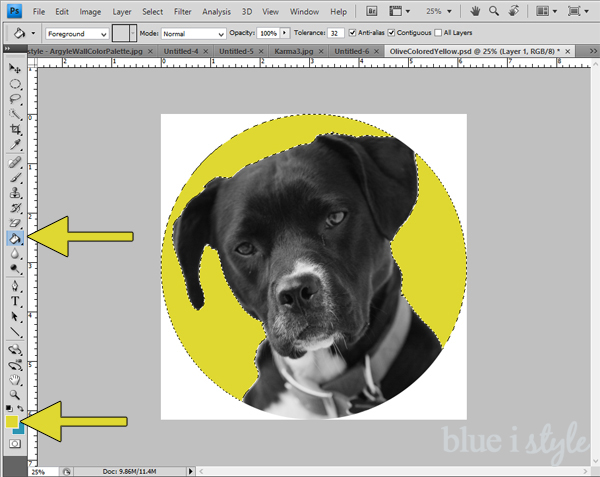 Finally, I set the size of the circle to be 3.875 inches at a resolution of 300 pixels/inch so that it would fit perfectly on the Ikea cork coasters. To set the size, click on the “Image” tool bar at the top, then select “Image Size.” In the box that pops up, change the “Document Size” to 3.875 inches in both width and height. 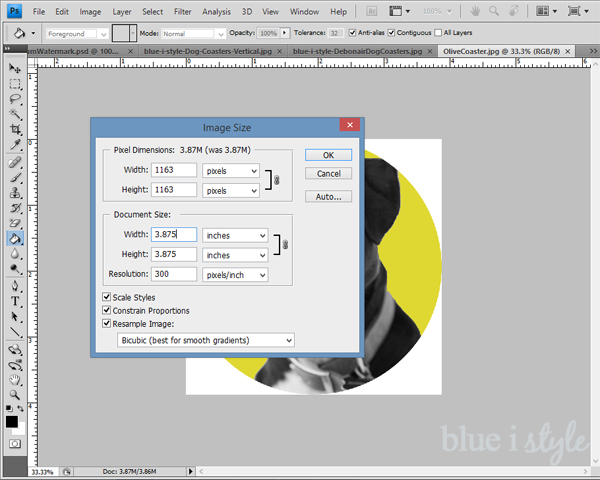 Note: This pop up box also shows you the resolution of your photo. If your photos are low resloution {less than 300 pixels/inch}, they may print grainy or pixelated, so be sure you are using high resolution images when making your coasters. It is important to understand that the image resolution of your image is determined by your camera when you take the photo. If you have a low resolution image – 72 pixels/inch – for example, simply changing the number in the “Resolution” box to 300 will not actually change the quality of the image, and your photo may still print grainy.
I repeated these same steps for each of the six dog photos, choosing a different background color for each. To make the coasters match Beckett’s room, I chose, as the background colors, the same colors that are in his argyle feature wall – yellow, light and dark blue, light and dark gray, and brown. I printed all of the photos onto cardstock.
SUPPLIES

Once the dog photos were all prepped and printed, I gathered up my supplies to assemble the coasters: 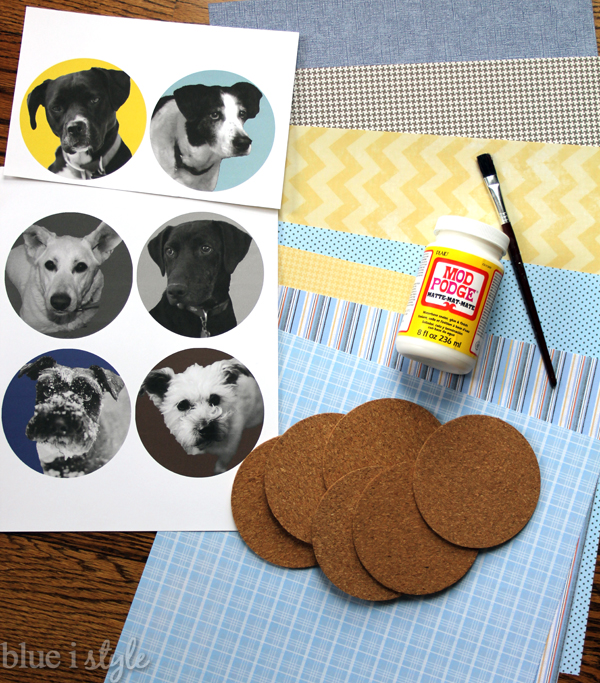 DRAWING & CUTTING BOW TIES
I dug through my stash of scrapbook paper, and pulled out a handful of sheets in colors that coordinated with the background colors of my coasters, and with patterns that felt appropriate for bow ties.
I turned one of the sheets of paper over {white side up} and used a pencil to sketch a bow tie in the corner fo the paper. To make sure I got the shape right, I pulled up a bow tie photo on my phone and sketched from that, roughly estimating the size that I thought would fit on the dogs. 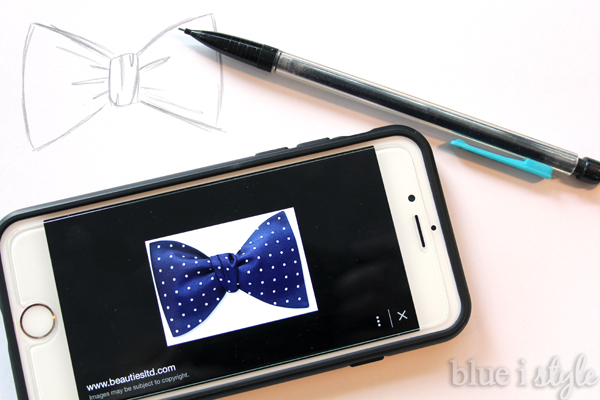 I cut out the bow tie and laid it on top of each of the dog photos to determine in the size was right. I decided it was just a bit too big, so I trimmed off a small amount all the way around. Once I was happy with the size,  I used this first bow tie as a template and traced it on each of the other papers. 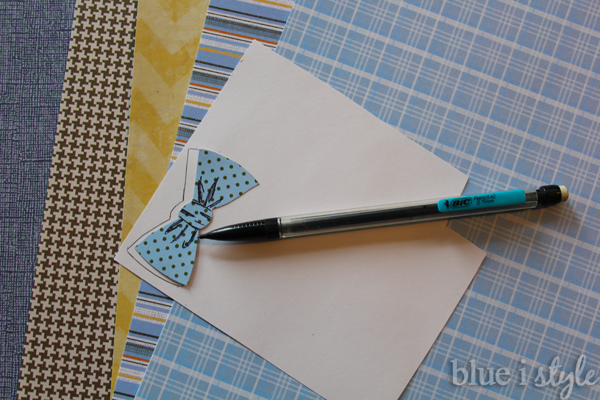 After cutting out each bow tie, I used an ultra fine point Sharpie to draw a few lines to give it more dimension. I thought about using a colored pencil to make these lines a bit more subtle, but I feared that the pencil would smear when later covered in Mod Podge, so the permanent Sharpie seemed a safer choice. 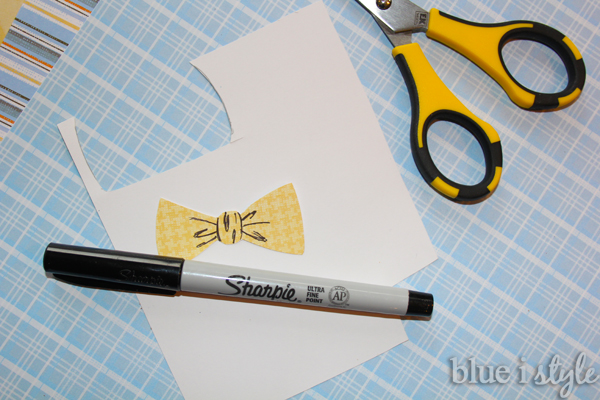 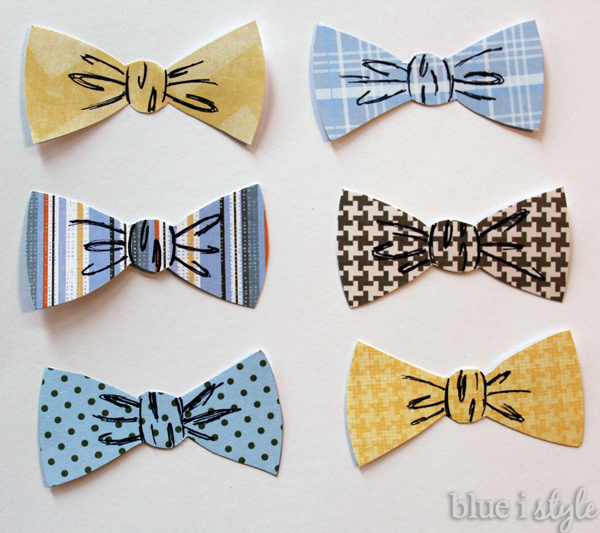 With all the bow ties made, I was ready to assemble the coasters. I cut out each of the circles with the dogs, and then used Mod Podge as glue to affix a bow tie to each dog. 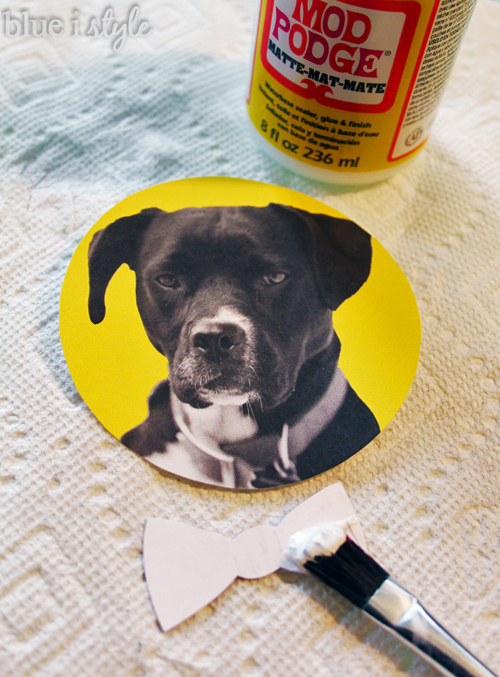 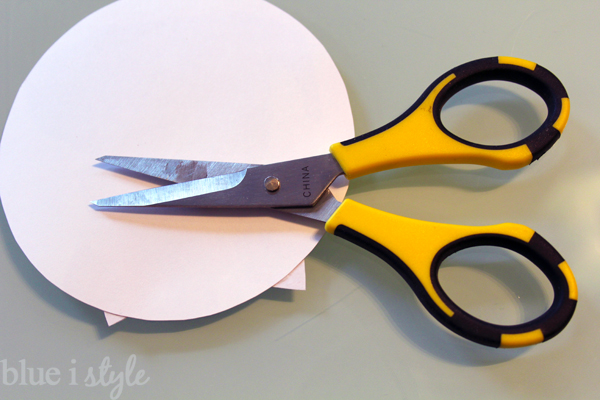 Next, I used a paint brush to fully coat the back of each circle in Mod Podge. One by one I placed the circles on the cork coasters, pressing them down to make sure they were stuck everywhere. {The first time, I tried putting the Mod Podge on the cork, rather than on the paper, but too much soaked in to the coaster and paper didn’t stick.} 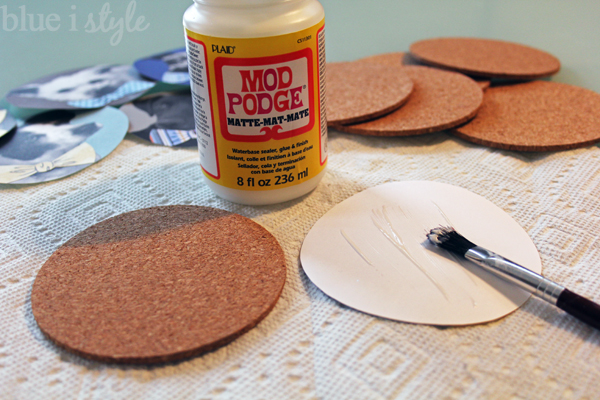 Finally, I coated the top and edge of each coaster with a thick coat of Mod Podge to give the dog photos a protective finish. The Mod Podge goes on white and streaky, but dries clear. Some brush strokes may remain visible in the clear finish, so I recommend keeping all of your brush stroked uniform in direction}. 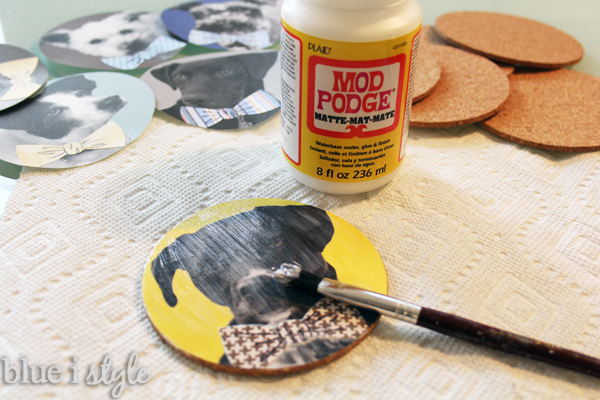 My biggest concern was ensuring that the paper won’t peel up around the circumference, so I also coated the edge of the coasters in Mod Podge, brushing from the side of the coaster up and onto the paper to seal the edges. 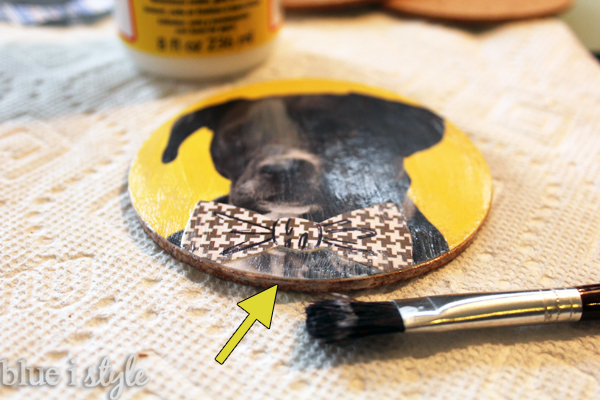 The Modge Podge dries quite quickly, so in no time at all, all six of the coasters were complete! 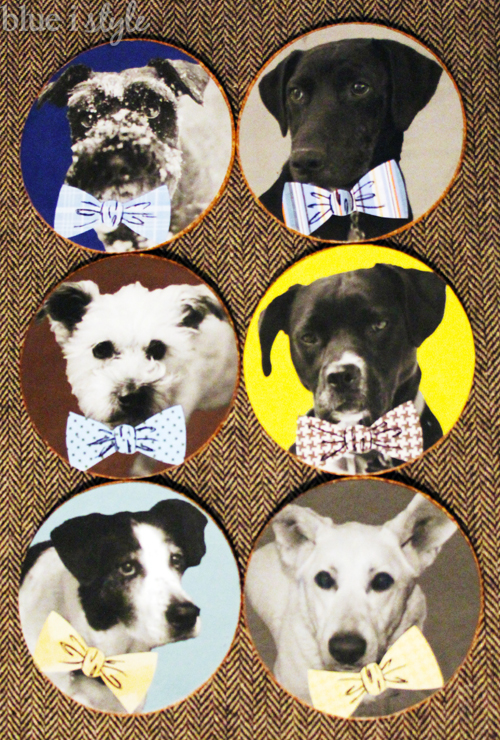 Beckett went crazy when he saw the coasters, and he’s been so excited to use them all week! 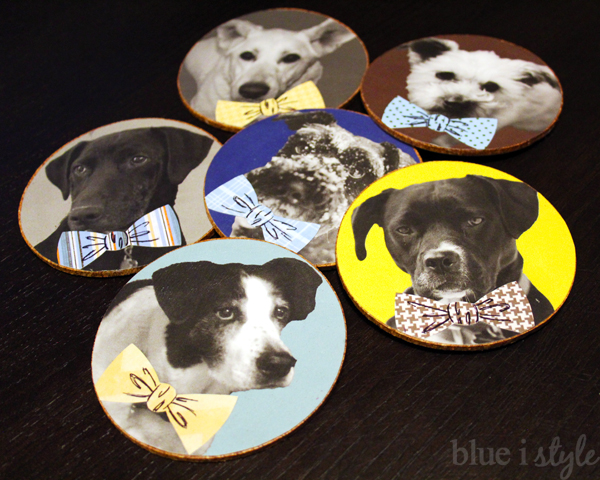 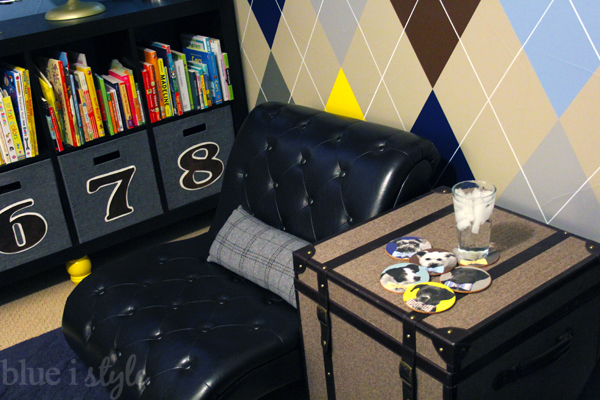 We live in a dry climate where our glasses don’t often get condensation on them. However, since I did not seal the cork on the back side of the coasters, they could be turned dog-side down if we had a sweaty glass and needed a more absorbant coaster surface.
These coasters would make the perfect gift for any dog lover! You could just as easily make all the coasters with the same dog photo, letting the background colors and different bow ties make them each unique.
Since I already had plenty of scrapbook paper and Mod Podge on hand, my only cost into this project was the $2 I spent on two sets of cork coasters. But even if you had to purchase the paper and Mod Podge, your total cost will still come in under $8!

Now it’s time to check out all the other great Craft Month A-Z projects! Below you’ll find the projects for A-M. Each Saturday in March, I’ll add the links to more of the alphabet as those projects are posted. At the end of the month there will also be a fun Craft Month giveaway that you won’t want to miss – so keep coming back! 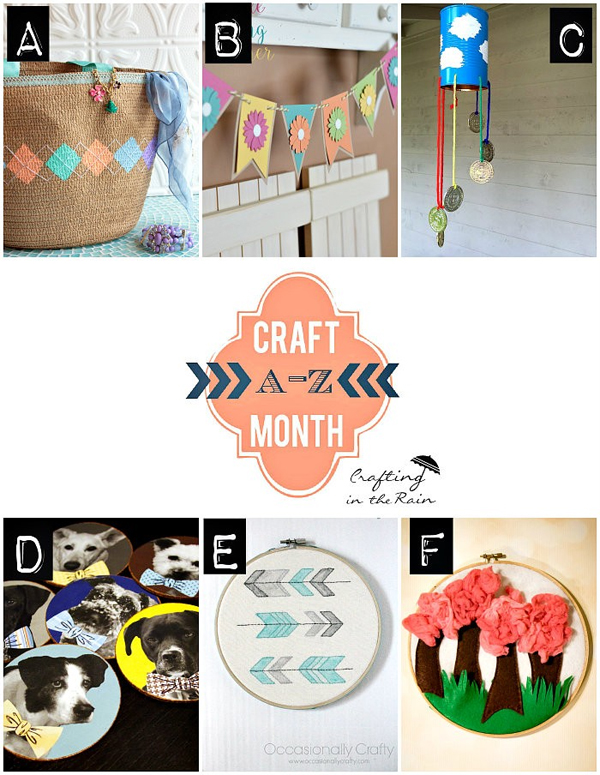 A is for Argyle Spring Tote by AttaGirl Says
B is for Simple Spring Banner by The Happy Scraps
C is for Can Windsock for St. Patrick’s Day by Sowdering About
D is for Debonair Dog Coasters by Blue i Style {you are here}
E is for Arrow Embroidery Hoop by Occasionally Crafty
F is for Fluffy Felt Forest by Albion Gould 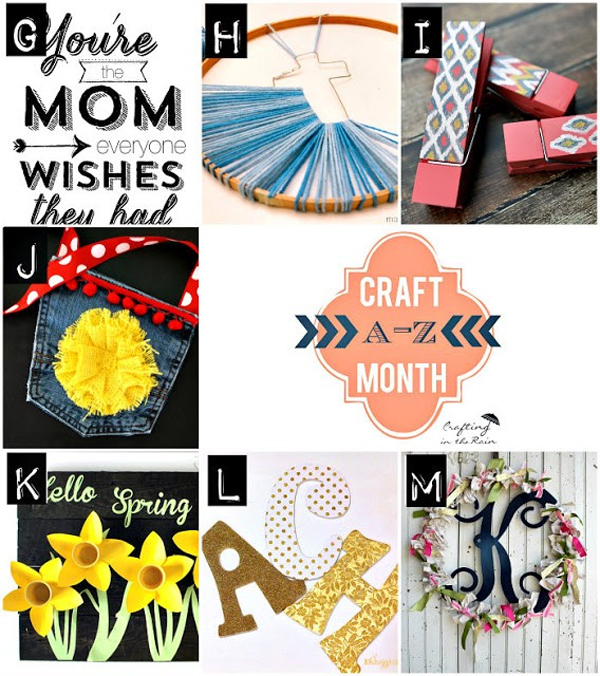 G is for Gift for Mother’s Day by Frenchie
H is for Hoop String Easter Cross by Made with Happy
I is for Ikat Clothespins by Hey, Let’s Make Stuff
J is for Jean Pocket Purse by Ginger Snap Crafts
K is for K-cup Daffodils by The Kim Six Fix
L is for Letters by Inkhappi
M is for Monogram Wreath by One Krieger Chick 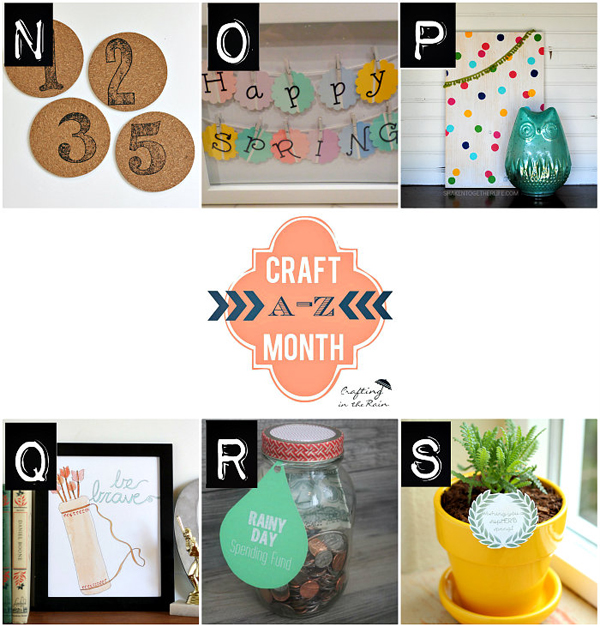 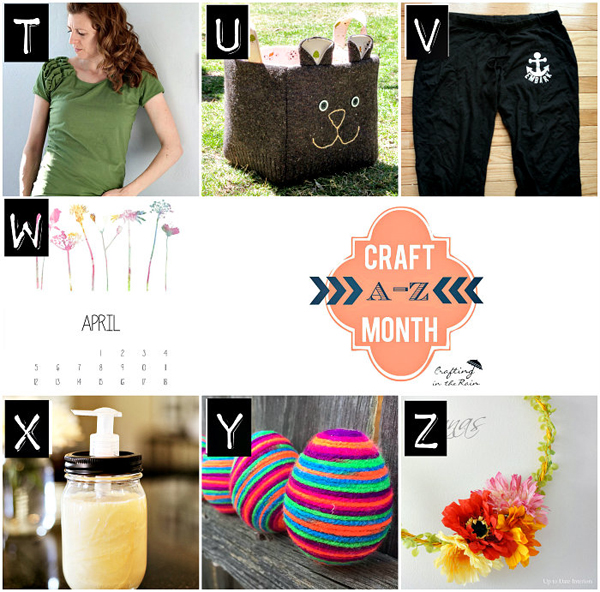 T is for Tee Shirt by Mabey She Made It
U is for is for Upcycled Basket by Tried and True
V is for Vinyl Decorated Sweatpants by Play.Party.Pin
W is for Watercolor Calendar by My Craftily Ever After
X is for is for X-acto Knife-cut Jar Pump by See Vanessa Craft
Y is for Yarn Wrapped Eggs by Cupcakes and Crowbars
Z is for Zinnia Wreath by Up to Date Interiors

Thanks again to Steph of Crafing in the Rain for coordinating this fun blog hop!

« Easy St. Patrick’s Day Decor: A Pot of Gold at the End of the Rainbow
{featured} Join Me at the Denver Home Show + Discounted Tickets »