Over the last month, I’ve showed you the changes we’ve made in our backyard throughout the six and a half years that we’ve lived in our home. Now that this summer’s backyard landscaping work is finally complete {only a month and a half behind schedule thanks to some crazy hail storms and non-stop rain}, I’m excited to finally be able to share the last installment in the Backyard Evolution series, which is all about how we’ve managed to make our small backyard feel twice as big… and definitely twice as functional! 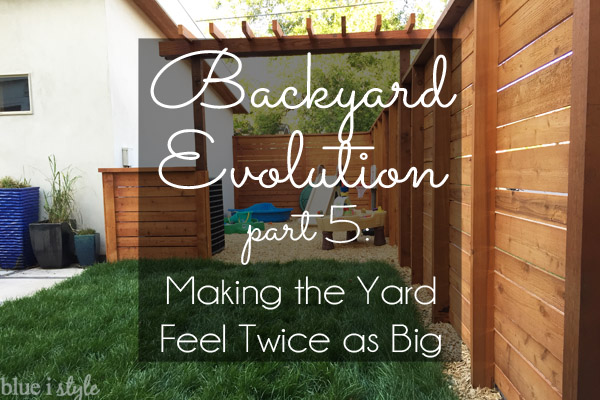 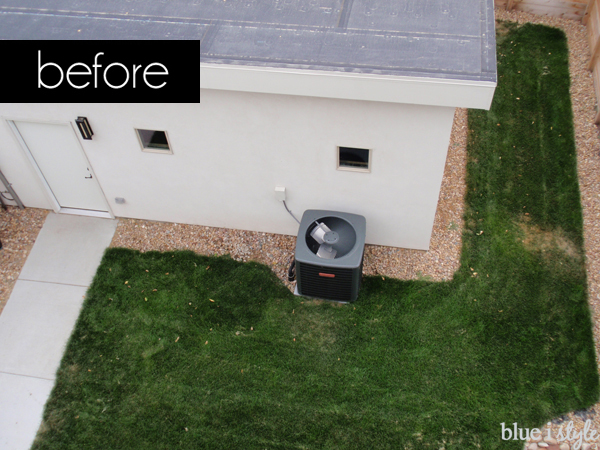 We started out with some grass in the middle of the yard {between the house and the detached garage}, as well as a narrow strip of grass along the side of the garage. We are super fortunate to have an double-sided fireplace that is shared between our kitchen and our backyard, but the existing patio was too small to even sit in front of the fireplace, so over the years, we removed the grass between the house and garage and replaced it with a large patio perfect for family dinners or for entertaining large groups.
You can read all about the patio, including how we added commercial grade string lights, in these posts:
We’ve been enjoying the patio for several years, but now that our boys are old enough to want to spend more time playing in the backyard, it was time to address the other part of the backyard – that silly narrow strip of grass surrounded by way too many rocks. Not only was this space small, it was also pretty drastically sloped, making the little grass we did have hard to use. You’ll be able to get a better sense of the slope in some of the later photos, but the patio sits about 2.5 feet higher than the sidewalk, so the slope of the grass was steeper than it appears in the photo below – enough so that it was hard for our 2 year old to navigate without falling. And the boys’ slide was anchored to the grass with re-bar, but never felt totally safe because it sat at an angle. 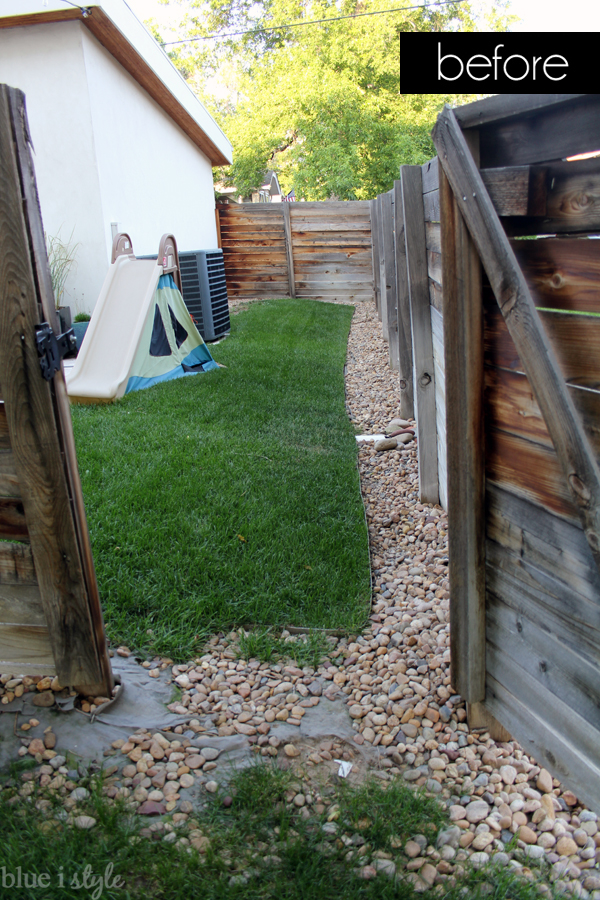 Because of the orientation of our house, the “backyard” is actually on the side of our house, so our fence is right along the sidewalk.

Not only did we have a lot of rocks bordering the grass on the inside of the fence, we also had a wide strip of rocks between the fence and the sidewalk. Because of the slope of the yard, those rocks were constantly spilling out onto the sidewalk, and we could never seem to keep up with the weeds growing in these rocks. 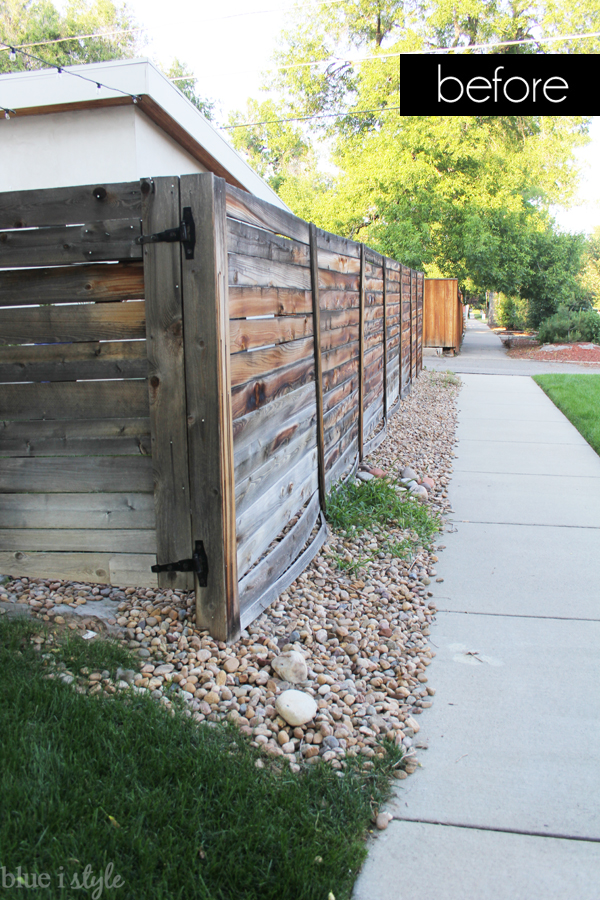 And over the years, as the rocks on the inside of the fence continually pushed against the lowest fence slats {because of the yard’s slope}, those slats were starting to bow and break. 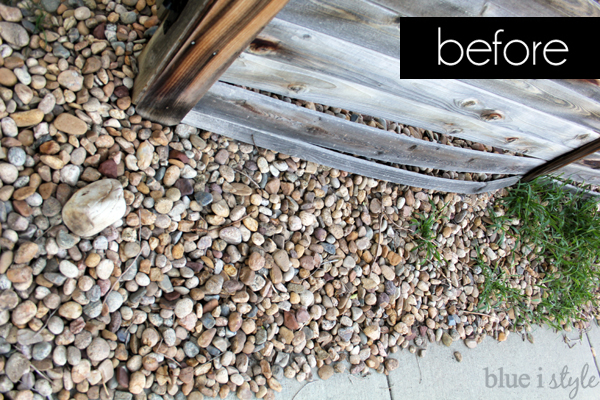 Needless to say, this fence/rock situation wasn’t doing anything for the curb appeal of our house! And all that wasted space between the fence and the sidewalk was space we weren’t enjoying in the backyard! And we had the same thing going on behind the fence on the alley side – lots of slippery, sloped rocks, weeds, and wasted space. 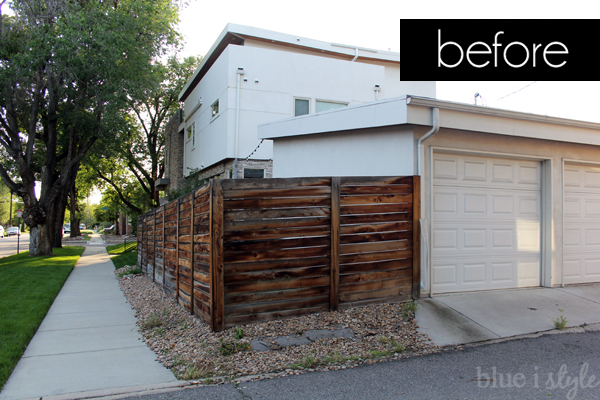 We’ve always known how we wanted to fix this situation, and finally this was the year that it rose to the top of the priority list. We never even considered DIY’ing this project – it’s definitely above our skill level and something we felt was worth paying the experts for. Of course, the experts cost a lot more than we had hoped, but we were able to rearrange the budget to make it work, and now that it’s done, it was definitely worth the expense.
Let me walk you through the process. First, the old fence came down. I was glad to see it go, but it definitely left us feeling a little exposed. You don’t realize how much you enjoy the privacy in your backyard until you find yourself without a fence for nearly a month! Although, we did meet some more of our neighbors as they walked their dogs in the evening – so there is the silver lining. 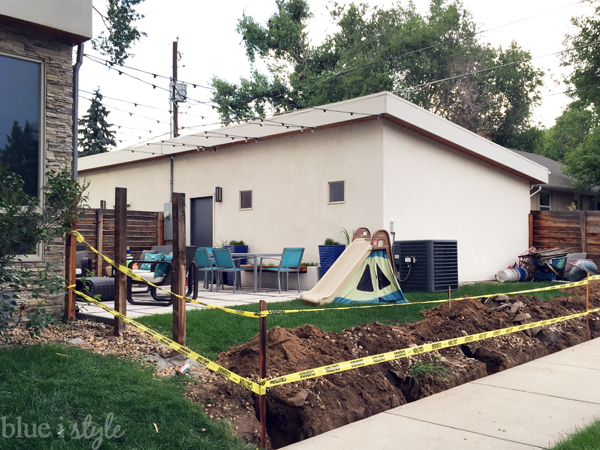 We immediately hit another delay with more rain and more hail, but finally the retaining wall started to go in. The retaining wall was built up to allow us to make the grassy part of the yard level with the patio, and by bringing the retaining wall all the way out to the sidewalk like, we were able to reclaim a couple of feet in the backyard, and eliminate the formerly wasted space between the fence and the sidewalk. 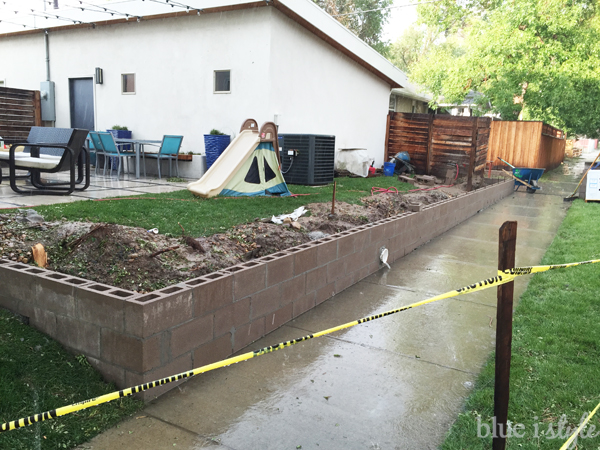 We considered a number of options for the style of the retaining wall, but ultimately decided to face the cinder blocks in the same stone facade that is on our house. 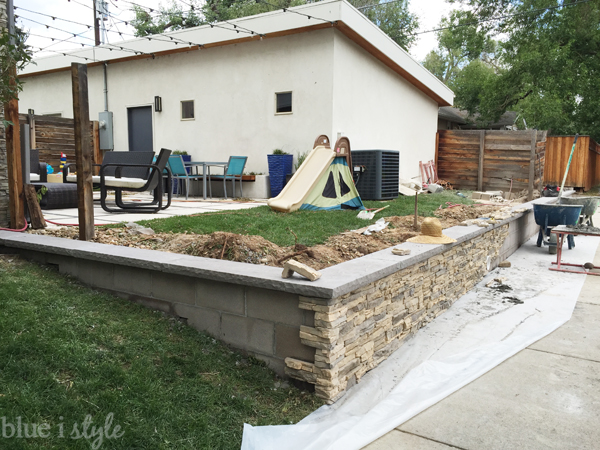 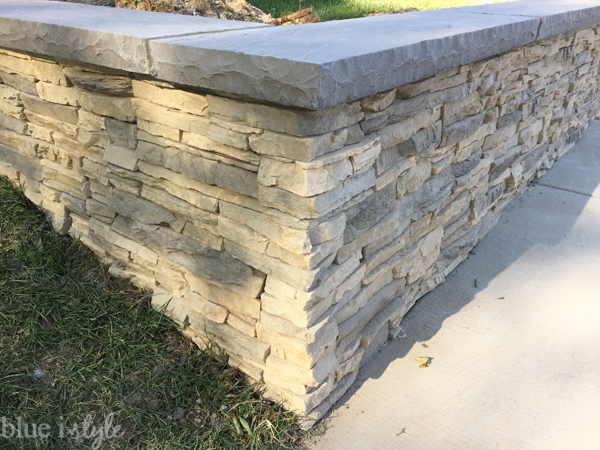 The stone wasn’t the cheapest of the options for the retaining wall, but since it spans a quarter of a block all along the front of our house, we decided that we’d regret it later if we didn’t spend the money to make the wall match the house. 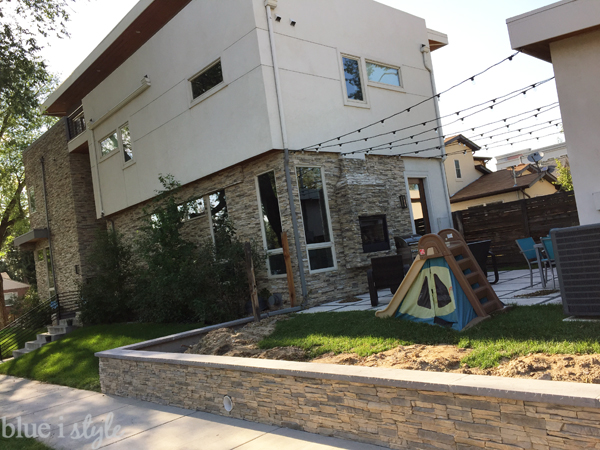 Once the retaining wall was complete {after several more weather delays} the new fence finally started to go in. 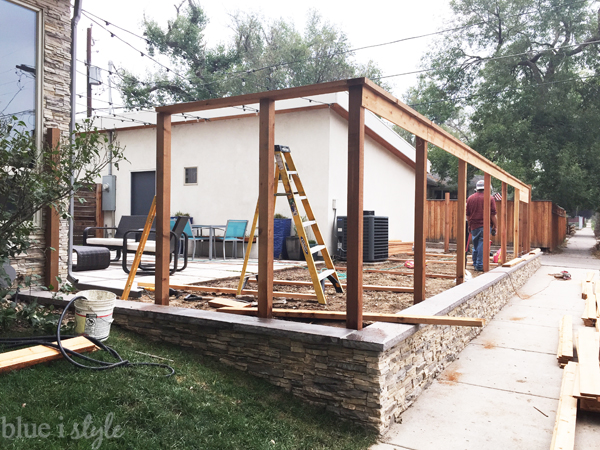 We chose to stay with horizontal fence boards {like our old fence} because it has a more modern feel, but decided to alternate between 6 inch and 4 inch boards for a more custom look. We also had them build the gate 3.5 feet wide {rather than 3 feet like our old gate} in order to make it feel just a bit more spacious. 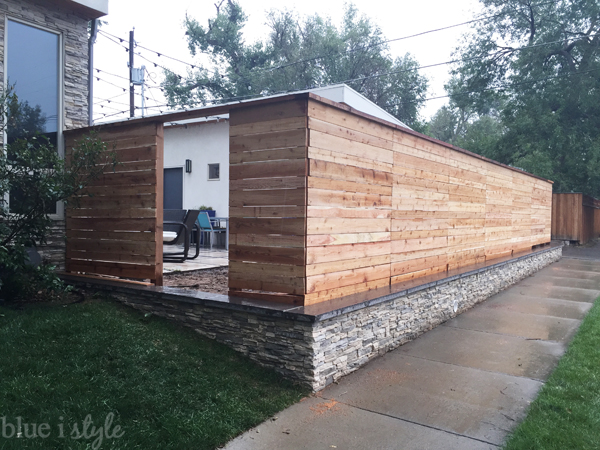 At the alley, we decided to use the extra space behind the backyard to create an enclosure for our trash, recycling and compost bins. Until fairly recently, we had shared dumpsters in the alley, but when the City of Denver replaced the dumpsters with individual bins they notified us that we were required to keep all the bins out of view during the week {or risk being fined}. While we are fortunate to have a three car garage, we really didn’t have room to conveniently store three large trash bins – so this new enclosure was the perfect solution for us! 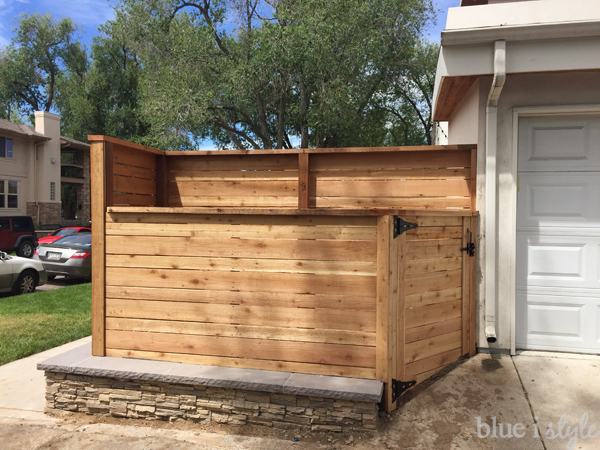 We are able to fit our trash, recycling and compost bins inside the enclosure, and can simply reach over the low fence to lift the lids and fill the bins throughout the week. On trash day, we can open the gate and wheel the bins out for collection, and then put them right back inside. It sounds silly, but I think I was just as excited about this trash enclosure as I was about the backyard because it solved a big problem for us. 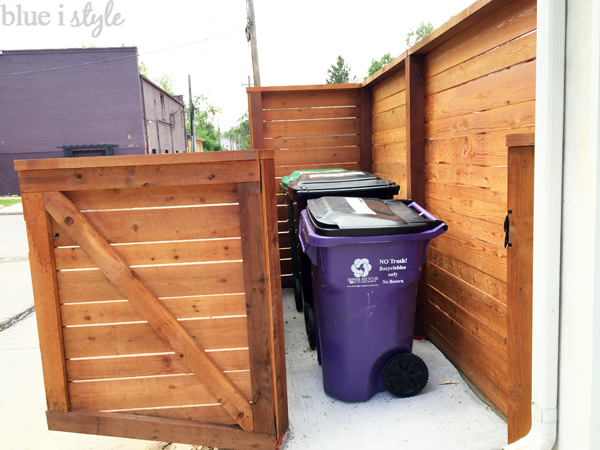 Inside the backyard, things were starting to come together as well. With the new fence up, we could really get a sense of how much wider the yard felt. Those couple of feet made a big difference in our small space.
We wanted to find a way to disguise the unattractive air conditioning unit without the expense of completely enclosing it, so we opted to have a screen built just on the front side of the AC unit, and then connected this screen to the fence with a small arbor {or is it a pergola?}. 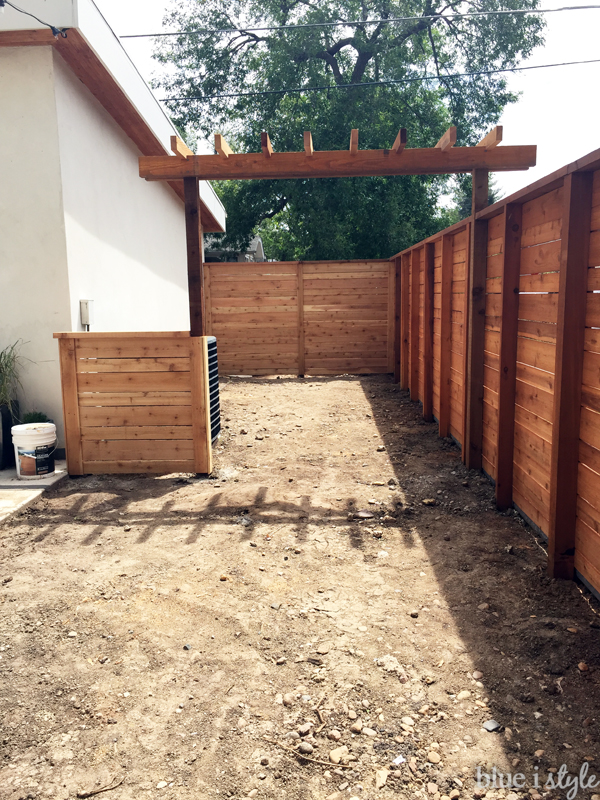 Ok, are you ready to see how the yard looks complete? Let’s head through the gate {the landscaper added a large block of natural stone to create a step up to the top of the retaining wall}… 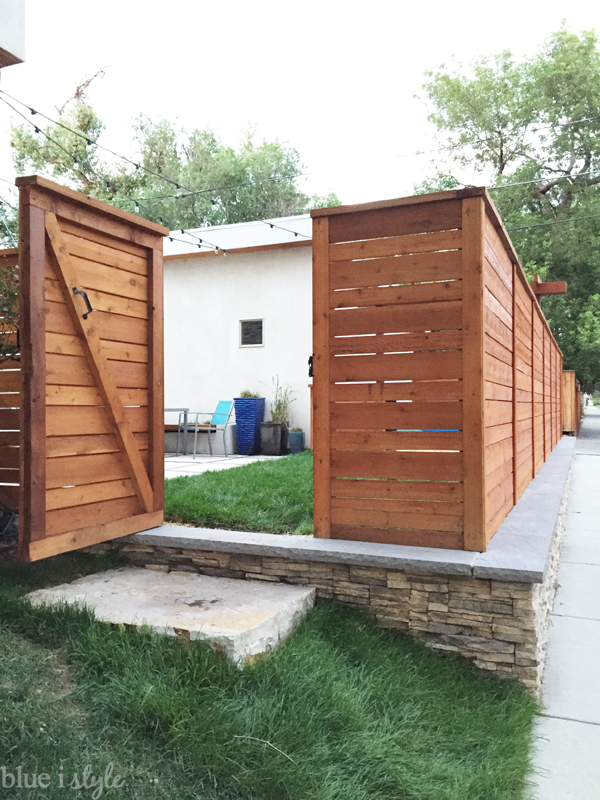 Welcome to our new and improved backyard! 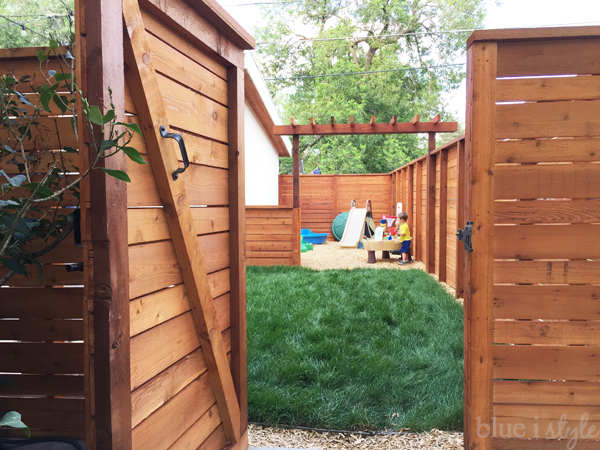 Rather than putting new sod in the entire length of our expanded backyard, we opted to put grass in front of the arbor, and play chips behind. The arbor helps to create a natural division of the yard, and a nice entry way into the kids’ space. 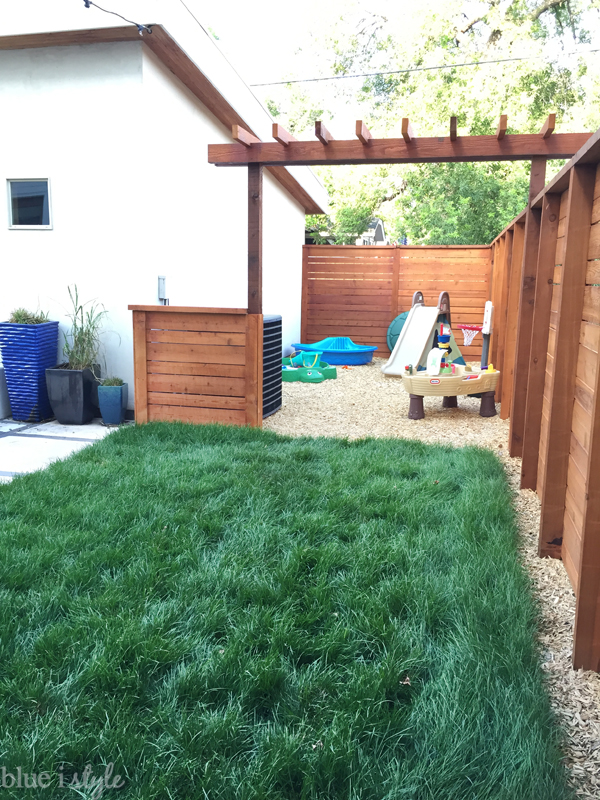 It wasn’t in the budget this year, but next spring we plan to put a two level clubhouse/playground in the back portion of the yard. For now, the space is home to all of the boys smaller-scale yard toys, including their slide with the tent below, water table, and basketball hoop, as well as their brand new wading pool and sandbox. 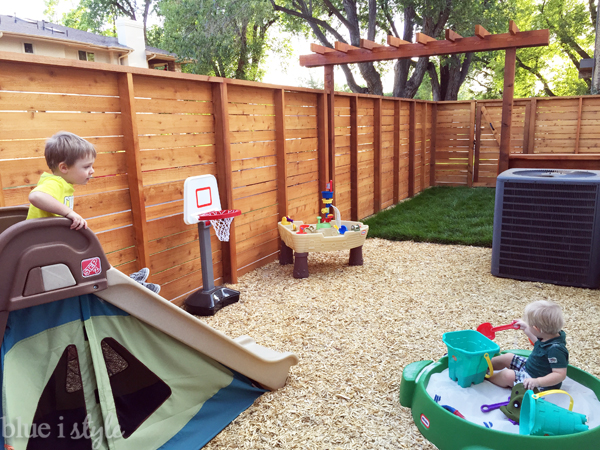 Their new sandbox is identical to the one I had at their age, and they have been enjoying it every day for the last week! 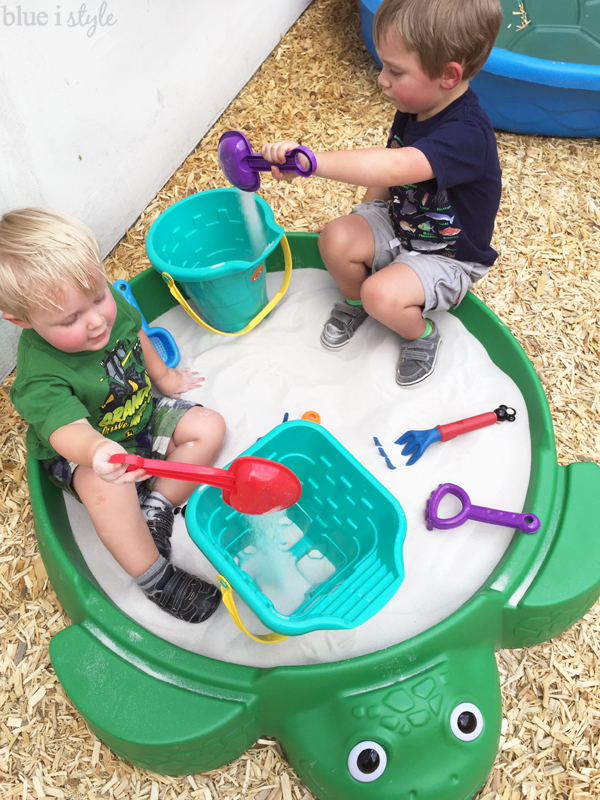 UPDATED: The following year, the kids were ready for an upgraded playground so we found one to fit our narrow space. We opted for a tree-house style with a climbing wall on the back, a slide, and a sandbox underneath. This playground typically comes with an arm for two swings, but by choosing to customize it without the swings, it’s a perfect fit for our limited space. 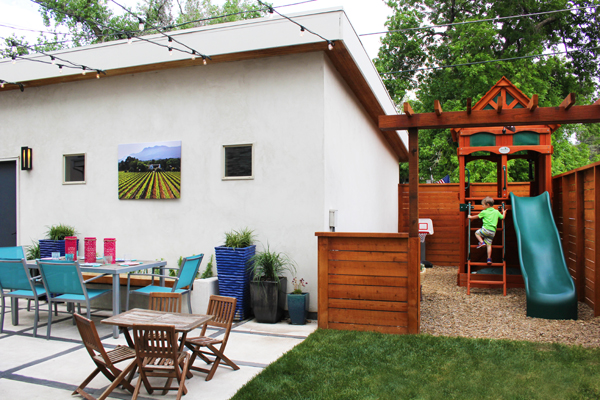 Now that you’ve seen the kids’ space, lets get back to talking about that AC screen… because of some pipes that sit out in front of the AC unit, the screen couldn’t sit quite as close to the unit as I had hoped, meaning that the AC unit isn’t totally hidden from the view of the patio. 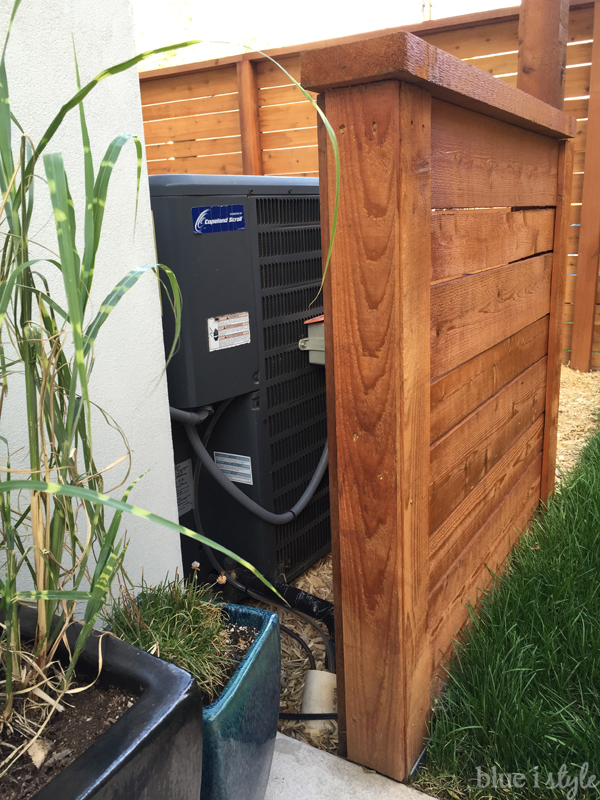 Nonetheless, the screen still makes the AC unit feel much less prominent than before. And next year I’ll probably add another pot of tall grasses right in front of the gap between the unit and the screen to help hide it further. 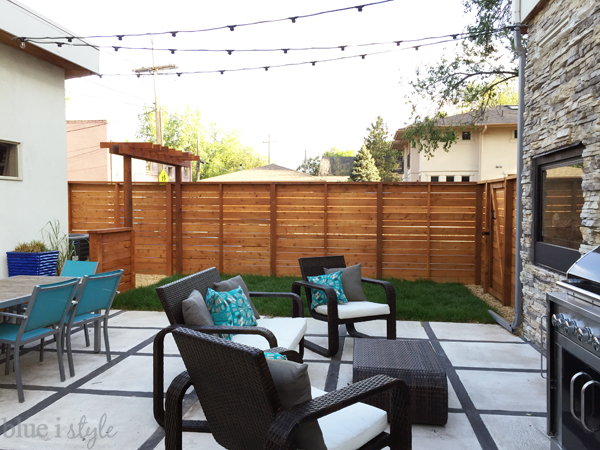 This backyard leveling and expansion project has been a long time coming, and now that it’s finally done, I couldn’t be happier. I finally feel like we have a yard the kids can enjoy, and our curb appeal is also much improved! 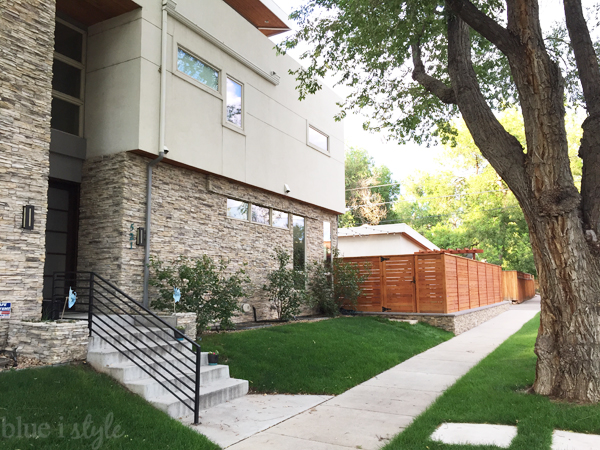 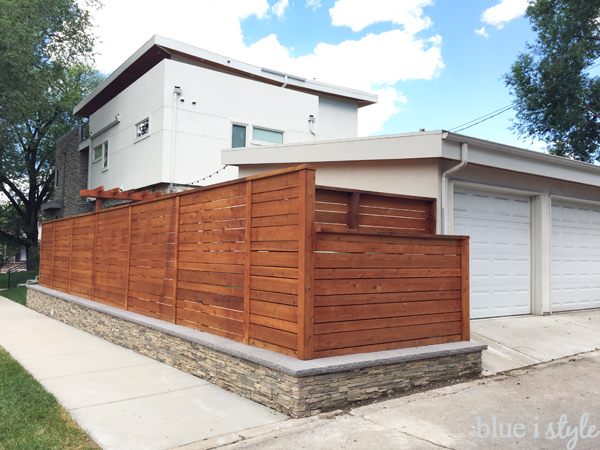 Now we are keeping our fingers crossed for a warm fall so that we can get a couple extra months to enjoy our newly improved backyard!
Thanks for following along with the Backyard Evolution series! I hope that maybe along the way you’ve been able to pick up a few ideas that might help you in your own yard!