Today marks the start of another One Room Challenge. Just one year ago, I heard about this event for the first time and about two hours later I threw my hat into the ring, committing to get Beckett’s “big boy” bedroom completed in a mere six {really it’s five} weeks time. It was CRAZY, but it got done and that made it all worth while! So worth while that I subjected myself to the craziness again in the fall when I redid our master bedroom for my second One Room Challenge. And just like that {a lot of sweat and tears later} we had the bedroom I’d been dreaming of since moving in to our home 6 years earlier. 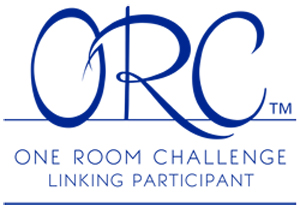 I think my husband was secretly hoping I wouldn’t join the One Room Challenge this time around, but when I told him what I had in mind, he was 100% on board… because it’s for our boys!! {If you are visiting today from the Boy Mom Madness event – you are in the right place!}


Before I show you the plans – let me show you the space. We are going to be working in tight quarters! Our “room” for the ORC this spring is nearly 12.5 feet long, but is just under three feet wide! What?!

As you may have guessed – we are working UNDER.THE.STAIRS! 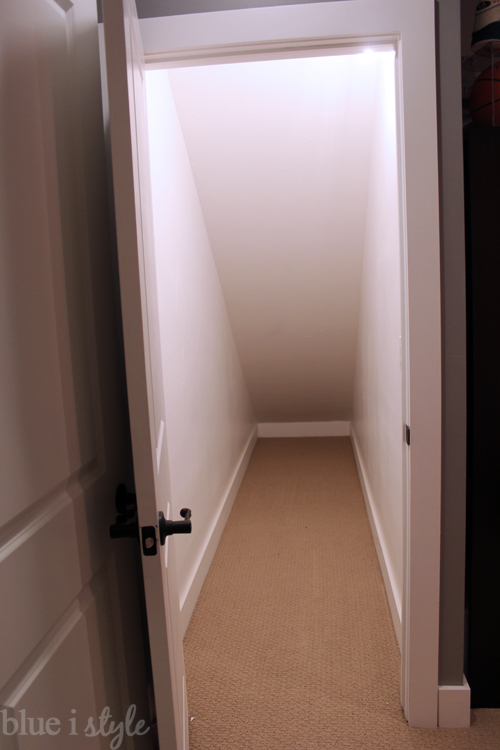 I am SO excited about this project because I’ve been dreaming it up in my head from the first time we toured our home when house hunting. As a child, we had family friends who had an under stair playroom, and I was obsessed! I think I only played in their under stair area a couple of times, but it had a huge impact on me.

I would lay awake at night dreaming up exactly how I would decorate my own under stair playroom. This is when I was probably about five… but the idea had always stayed with me, so when I saw this finished out under stair space – I immediately told Scott it had to belong to our someday kids.

And now those someday kids are 3 years old and almost 2, and I CAN’T wait to show them this space in six five short weeks.It’s going to blow their minds… mostly because they don’t even know this space exists! Isn’t that the dream – to suddenly discover a door in your home that leads to a whole new space you’ve never seen before?! No really – I have that dream all the time – am I the only one?! Neither boy has ever questioned what’s behind that door, which is going to make it all the better when we show it to them for the very first time and tell them it’s all theirs!

When we moved in, we made a pact not to fill up this under stair space with too much stuff, because I didn’t want to come to rely on it as a storage space, making it hard to later turn over to the kids. And for the most part, we’ve managed to keep that pact. Over time, we have randomly kept various things in the space – most recently our Christmas tree and some random other decorations – but nothing too hard to clear out. 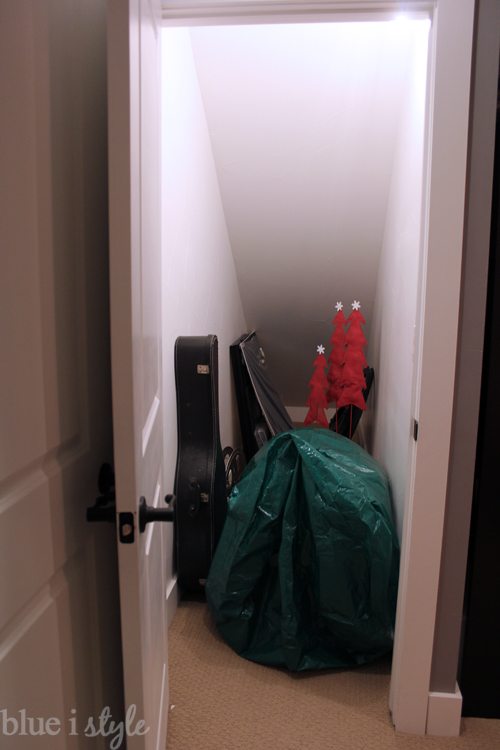 Ok! Now you’ve got the back story, and you’ve seen the tiny space. Hopefully you’re eager to see the plans! So without further ado… 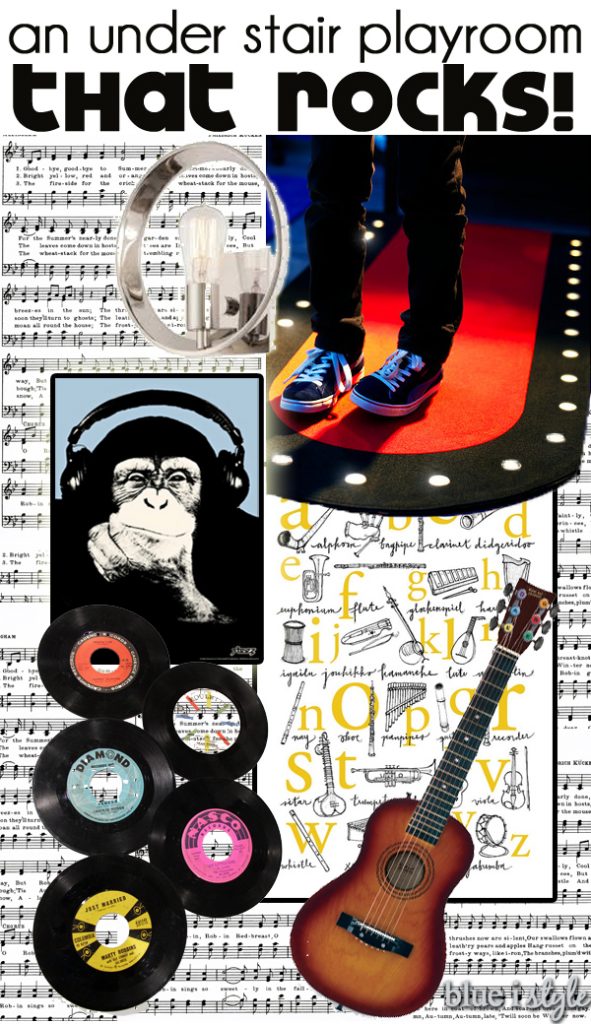 I have been so tempted to turn this space in a pre-school fantasy wonderland of sorts, but I am resisting the urge because I don’t want to be redoing it again in a few short years. Instead, we are going to create a fun and engaging space that will inspire our boys’ creativity!

Both boys love music – a trait the definitely get from their dad {whose second career is as a professional musical theater performer}. One of their favorite things to do is to have dance parties in front of our juke box. They sing along with so much passion, and play along with all sorts of little instruments {the recorder is their current favorite… not so much mine}! 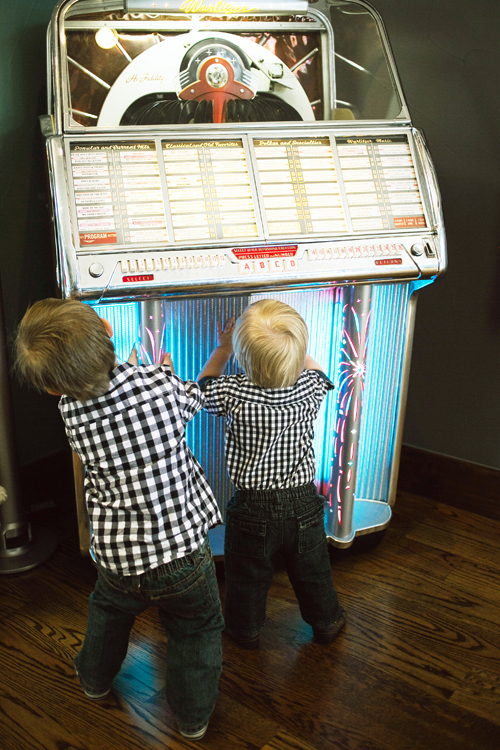 So rather than creating a playroom centered around a typical little boy theme – we are instead giving them a space where they’ll be surrounded by music and art and creative play!

The under stair area is so narrow that we don’t envision this as a place where we’ll store many toys at all. Rather, I want to keep the floor space open so they can take toys in and out as they wish, or can simply play their little instruments or curl up to read {another of their favorite things to do}.

But just because we aren’t going to fill the “room” with a lot of stuff, doesn’t mean it will be short on style! We have big plans for every surface of this space! Here’s a quick overview of what I have in mind…

Let’s begin the the right wall. I plan to cover this entire wall in sheet metal in order to create a large scale, ping pong ball wall coaster – a DIY version of products like this. And since sheet metal also works with dry erase markers, we’ll have the added bonus of an art wall! 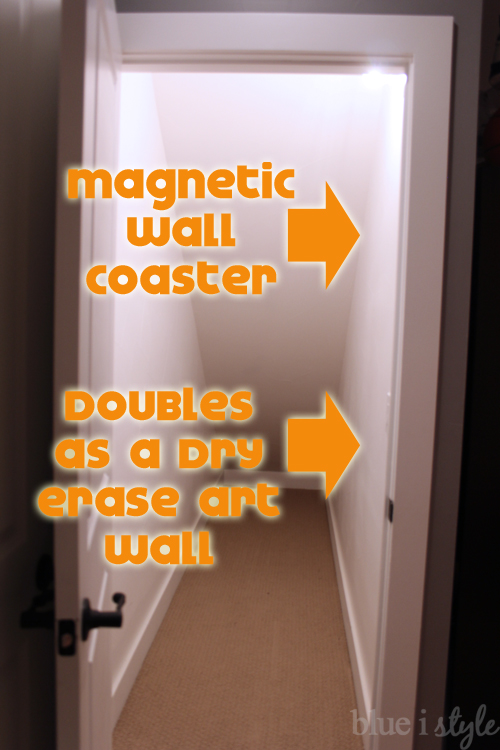 Speaking of art, I plan to create a gallery wall of sorts on the opposite wall. I plan to frame a fiew pieces of art, and then use frames with clips to display our boys’ art in the remaining frames}. On the lower part of that wall, I want to create very narrow book and toy storage – something that won’t take up too much space in this very narrow room, but that will add some function. 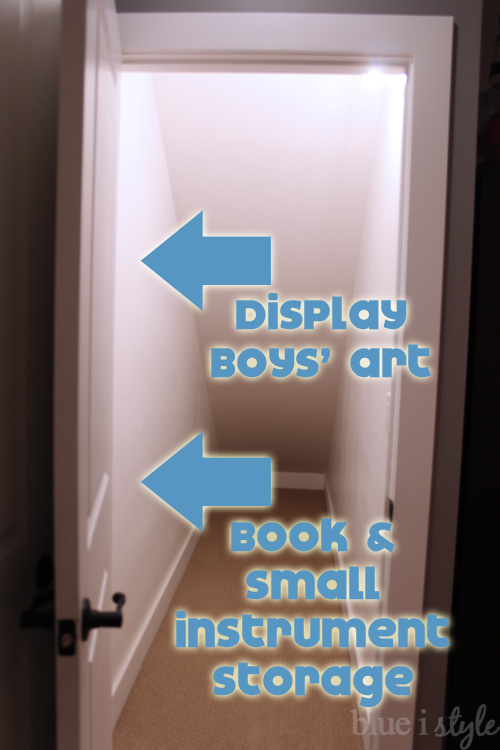 I have big plans for the ceiling. I’m not ready to spill the beans yet, although if you follow me on Instagram, I did post a hint there last night. 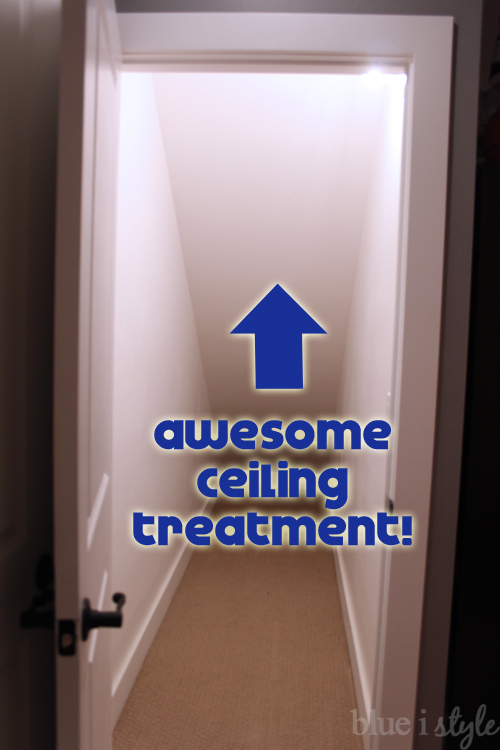 Lighting is always an important element of any space, and it’s certainly going to be key in this very small under stair area. Right now, it feels quite bright because all of the walls are white. I am not planning to paint, but we are going to be covering a lot of the white with other treatments – so we’ll also be adding some new light to keep the space feeling bright. 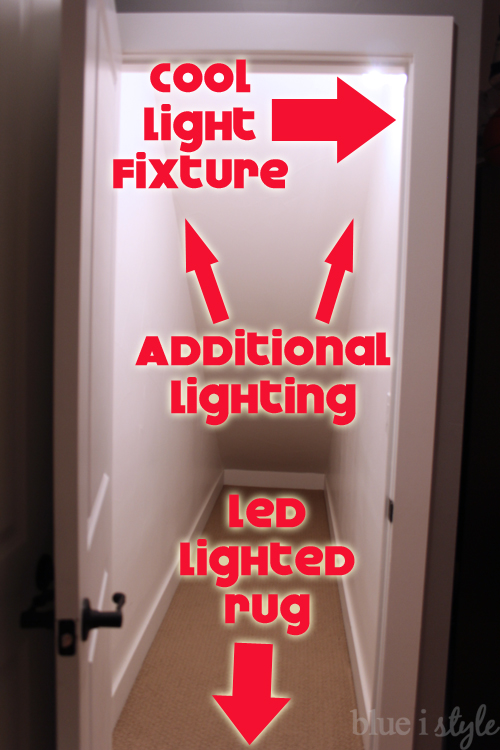 Finally, here’s a view looking from the back of the under stair room back toward the door. I hope to swap out the full door for a Dutch door. And I also have a fun art project planned for above the door….I’m going to be creating a collage of sorts using music and lyrics. 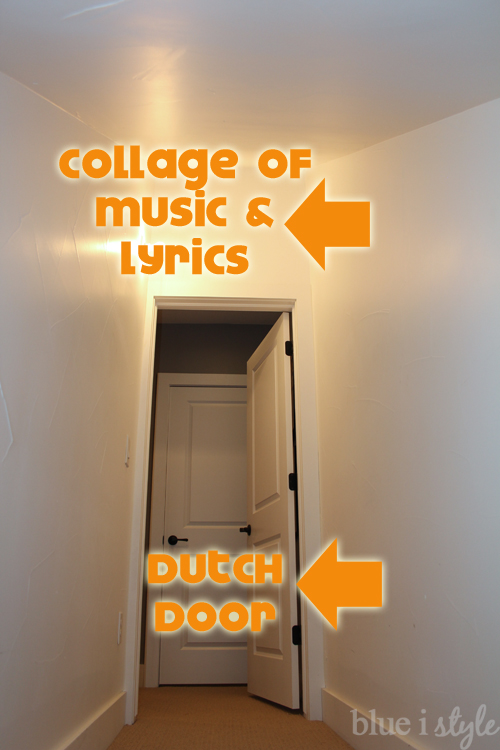 That’s a lot going on in a small space, right? But since this is for the kids, I think it will be just the right amount of simulation and activity, balanced by open floor space for play. Now that I’ve walked you through the plans – here’s one more look at the design inspiration!

Thank you so much to Linda of Calling it Home for hosting this amazing One Room Challenge event year after year, and for graciously allowing us all to participate! Be sure to stop by and see what spaces all of the other ORC linking participants are working on and check out their design plans!
BOY MOM MADNESS. And for those of you who came by today for Boy Mom Madness, you’ll notice that I didn’t post about my boy mom style today per the schedule, but I hope you’ve, nonetheless, enjoyed checking out our stylish plans for a creative playroom for our boys. Be sure to visit these other boy moms to learn about their boy mom style. Also, be sure to come back tomorrow for a huge “all things boy” link party and to enter the Ultimate Boy Mom Giveaway!  My Five Minute Friday project tomorrow will also fit the Boy Mom Madness theme – so there’s a lot going on! 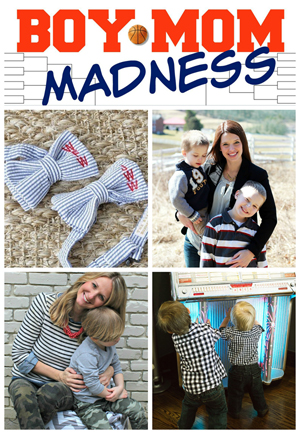 Thanks for stopping by today! I am so excited to get started on this under stair playroom project and I’ll be sharing my first progress report next week!
One last thing – if you want to check out my prior One Room Challenge spaces – you can find it all here:
FALL 2014 ONE ROOM CHALLENGE: