Tissue paper tassels are all the rage right now! And it’s no wonder why – since they are so dang cute and all! 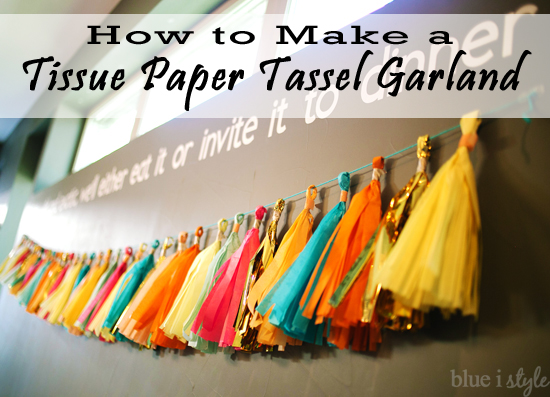 I recently made about 60 tissue paper tassels to decorate for the Stock the Kitchen wedding shower that I hosted for my sister-in-law, and while it took a bit longer than I anticipated {about 2.5 hours with my mom and I working together}, the process of making each tassel is quite easy and I learned some tricks along the way to make it even easier.

Tissue paper in your choice of colors {1 sheet = 2 tassels}
Scissors {alternatively, a rotary cutter speeds up the process}
Decorative washi tape {or clear tape}
String, ribbon or yarn {not pictured} 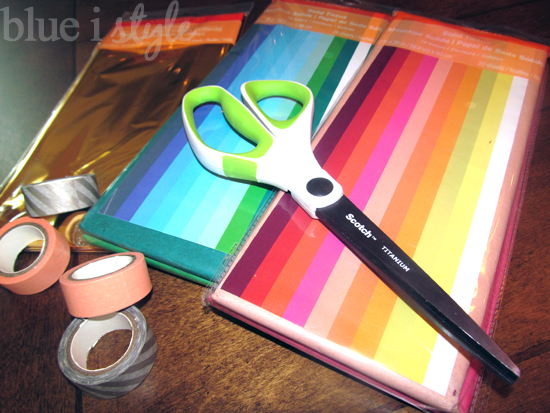 Begin by folding each individual sheet of tissue paper in half lengthwise, and then fold each again widthwise. Rather than making one tassel at a time, I created a bit of an assembly line {my mom was helping me} by folding all of the tissue paper before moving on to the next step. 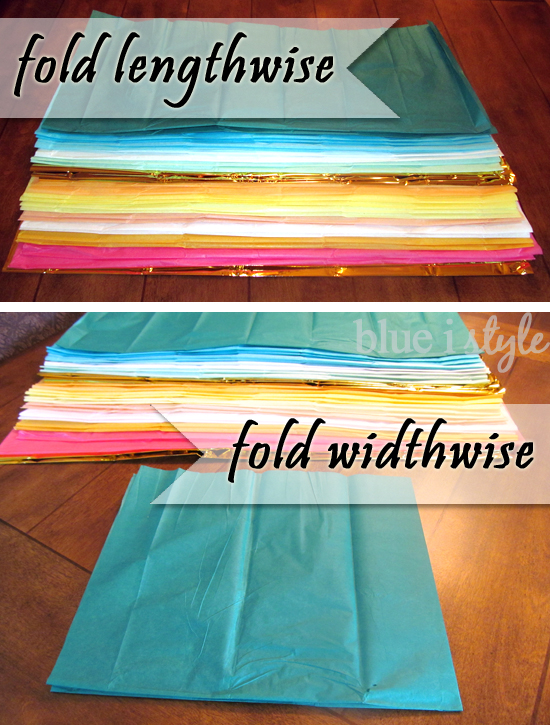 After folding the tissue paper, begin cutting strips to create a fringe. Cut toward the initial fold line, leave about 1 inch uncut at the fold line. The width of each fringe cut does not need to be exactly the same, so you don’t need to measure or be too precise, but the finished tassel will look nicer in the fringed strips are similar in width.

I began cutting the fringe using a regular pair of scissors. After about 10 tassels {and when we realized that it was going to take hours to make all 60}, my mom suggested that we try using her rotary cutter, which made much quicker work of the fringe cutting! 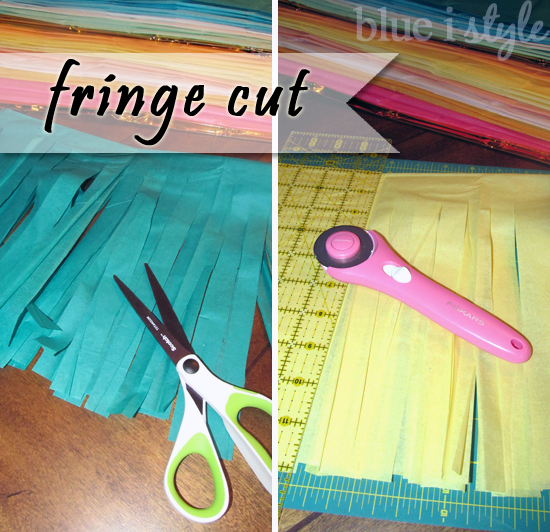 Word of warning – don’t ever use fabric scissors or rotary blades for paper! The paper will dull them quickly and they will no longer work well on fabric! My mom sews a lot, and once a rotary blade eventually becomes too dull for cutting fabric, she retires it to paper-cutter status. But don’t cut paper with a blade that you intend to use for fabric again!

Once all of the strips are cut, unfold the second fold that you created in the paper {the widthwise fold}, and then cut the tissue paper in half. This will leave you with two separate fringe cut sheets for making two tassels. 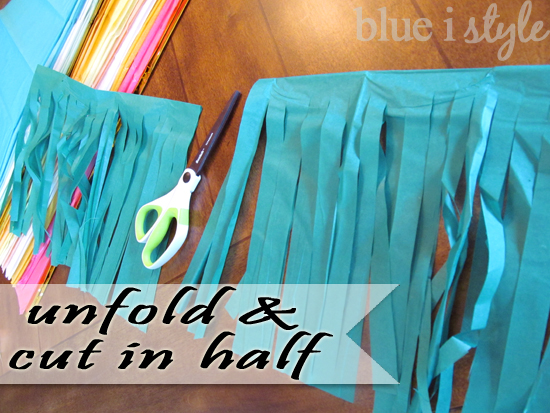 After cutting the fringed tissue paper in half, unfold it again, and roll it tightly down the middle crease. 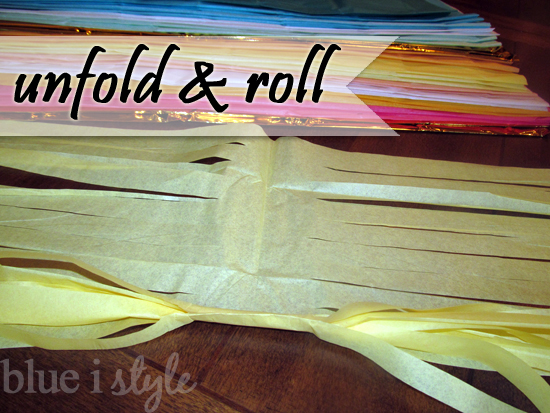 It’s easy for the fringe to get tangled up as you roll, so it’s helpful to roll slowly, untangling as you go.
I also discovered that the rolling process can be made quicker and easier by folding the fringed tissue paper in half twice before rolling – this simply reduces the length that you have to roll, but does not change the end appearance of the tassels. I failed to take any pictures after making this discovery, but hopefully this clarifies the directions of the folds. 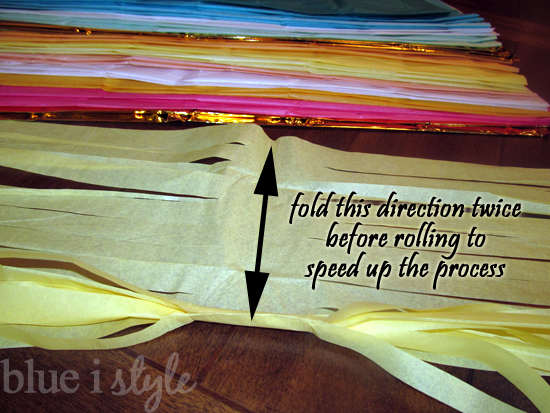 After you have finished rolling each tassel, fold them in half and twist to create the loop that you’ll use to hang the tassels. 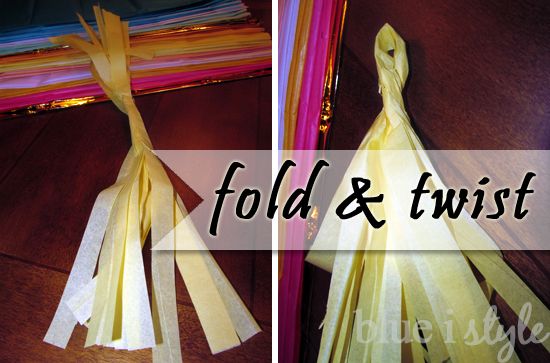 To prevent the tassels from coming untwisted, I suggest wrapping some decorative washi tape tightly around the twisted part of the tassel about three or four times. 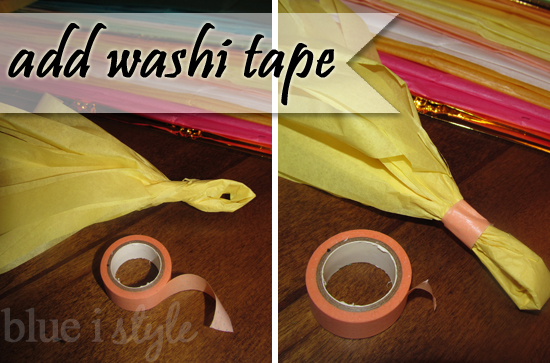 And just for fun, here’s what a pile of 60 completed tassels looks like… 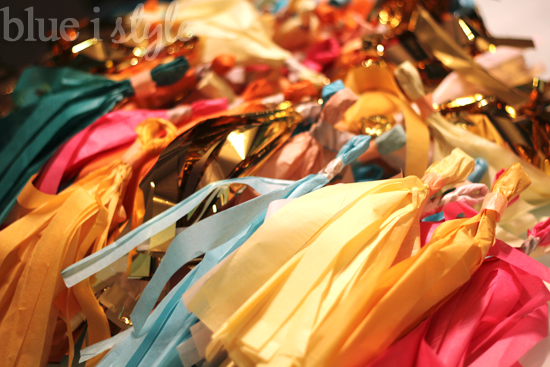 Finally, once your tassels are created, you are ready to string them up and hang them. I chose to use yarn to hang my tassels, but string or a thin ribbon would work just as well. 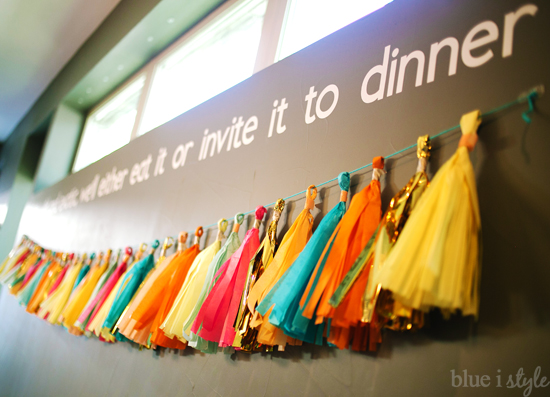 I tied the ends of the yarn to clear 3M Command hooks that I stuck to the wall. 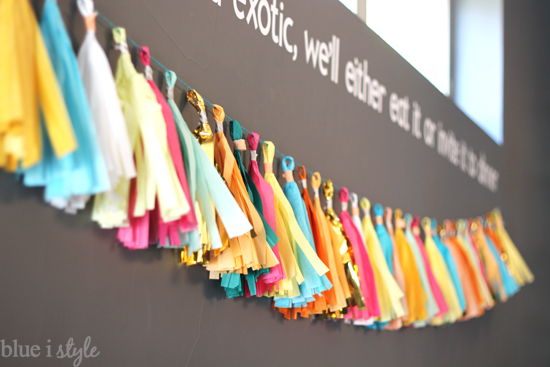 I used this tissue paper tassel garland to decorate for the Stock the Kitchen wedding shower that I hosted for my sister-in-law. 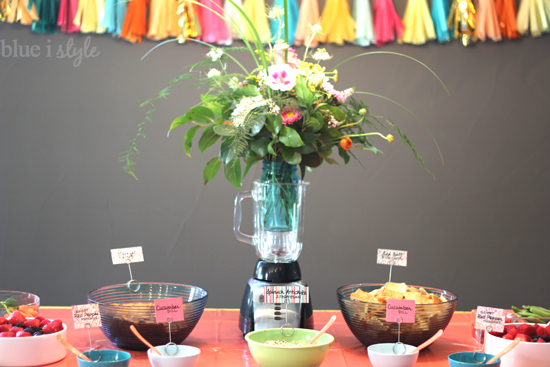 There are many more photos of the tassels, as well as the other decorations, in the full wedding shower post.
For those who are visual, like me, {or if you want to pin these instructions for later} here’s one final look at all the steps involved in making tissue paper tassels.

Have fun making your tissue paper tassels! I recommend watching something good on Netflix while you work on this project!