My husband thinks I’m a little crazy, but when we watch TV, I’m often paying closer attention to the interior design details than I am to the storyline. And when I’m flipping channels and see a gorgeous room, I’ll often stop and watch just to check out the details of the layout and furnishings. That was the case recently when I ended up watching an episode of Melissa & Joey for the first time all because I caught a glimpse of a to-die-for couch!

I’ve seen a lot of button tufted couches, but never one like this…it has a nail head detail around the back edge, and a dark piping around the seat cushions, and it’s just OH SO PRETTY! 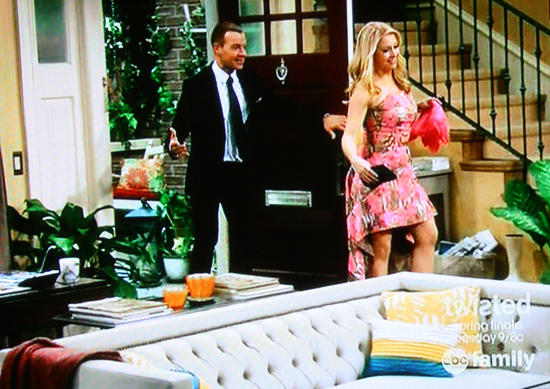 Here’s a better look at the couch in a photo of the living room set from Season 2 {the show is now in Season 4}. The Season 4 set has the couch in a different location, with new, yellow pillows, and paired with a much more striking blue quatrefoil chair. In the current set design the walls are also painted a buttery yellow instead of the green seen here, but the rug and coffee table remain the same as in this Season 2 photo.

While drooling over the couch watching the episode of Melissa & Joey, lots of other details of the living room set drew my attention. For example, take a look at the circular handles on this beauty of a media console table, and the wallpaper behind the television is subtle but impactful.

Having always been a fan of that segment in HGTV Magazine where they show you how to style your room similar to the set of a popular television show, I though, why not do that myself and create a mood board to show you how to steal this Melissa & Joey look?! 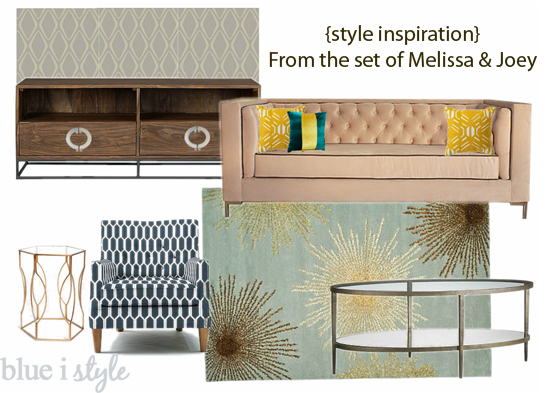 Let’s talk details, shall we?

Couch: The couch is certainly the focal point of the Melissa & Joey living room, and it’s very unique. While there are a lot of couches out there with button tufting and nail heads, the placement of the nail head detail combined with the dark piping on the seat cushions makes this couch unlike any other I’ve seen. I searched and searched, and finally found a couch that really captures the flair of the on-set beauty. The Tobias Tufted Sofa by Decenni Custom Furniture {available on Overstock} has black piping around the edge of the tufting instead of nail heads, but combined with the piping on the seat cushions, it looks remarkably similar to the Melissa & Joey version.

As you might suspect, the Tobias Sofa doesn’t come cheap! If a $2,300 couch isn’t in your budget {it’s certainly not in mine}, then you might want to instead consider the Ivory Kendall Sofa from Cost Plus World Market.

While this couch doesn’t have the nail head detail or the dark piping, it does have very similar lines and tufting, and at only $560 those compromises don’t seem so bad!


Rug: I was able to find an exact match for the Safavieh Soho Rug from Rugs-Direct.

Coffee Table: The Clairemont Coffee Table from Crate & Barrel also appears to be an exact match to the one seen on set.

Accent Chair: The Melissa & Joey living room features a vibrant blue quatrefoil armchair, and while I wasn’t able to find a matching quatrefoil chair, the West Elm Livingston chair in a blue and white honeycomb provides the same contrast of color and pattern, and would be a great statement piece in any room.

Side Table: Although there is no side table visible in the Season 4 living room set, the Season 2 set featured a gold hexagon side table with a glass top, nearly identical to this one from Urban Outfitters that rings in just under $100.

Media Console Table: The Melissa & Joey media console table stands out because of the grain of the wood as well as the round door pulls. The Prime Media Console from CB2 features a totally different wood grain, but the lines and functionality of the piece are very similar. Installing cabinet pulls from the Atlas Homewares Roundabout Collection would take this console up a notch and give it the high-end look of the one on-set.

Wallpaper Feature Wall: Did you know that Target sells wallpaper now?! The tone-on-tone color palette and graphic pattern of the Devine Color Diamond Wallpaper featured on the mood board is reminiscent of the wallpaper behind the television in the living room set – it is subtle enough to not feel overwhelming when mixed with the other colors and patterns in the space, but would still make a statement behind the entertainment center.


I had so much fun putting together this Melissa & Joey living room look-alike that I decide to play around with one more mood board and see how the same design elements would translate to a bedroom, and I love how it came out! 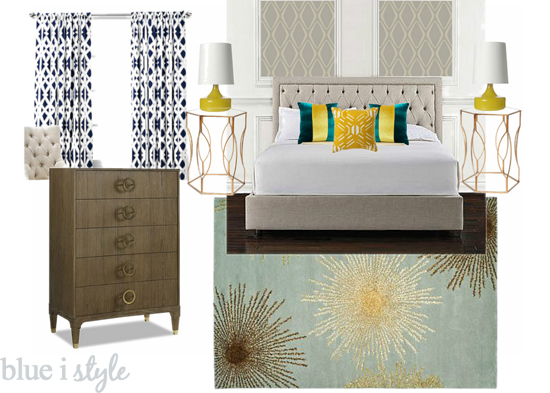 Headboard: The Lyell Tufted Headboard from Frontgate is on the pricey side, but look how closely the tufting and nail head placement mimics the lines of that gorgeous Melissa & Joey couch! Of course, there are lots of other tufted headboard options on the market that could provide a similar look for less.

Drapes: For this bedroom mood board, I chose to bring in the blue and white pattern through the Elton Drapery Panels from Z Galleie rather than on an accent chair.

Chest/Dresser: How amazing is that chest of drawers with the circular pulls? At over $2,000 it would be a major splurge, but it’s so gorgeous that I just had to put it on the mood board. However, to get a similar look for less than half the price, you might instead consider purchasing a straigh-lined wood dresser {like this one from West Elm} and then add round pulls from the Atlas Homewares Roundabout Collection, just as I suggested for the media console above.

The rug, wallpaper, pillows, and side tables are the same as those listed above for the living room mood board. Used as nightstands, the hexagon side tables would look lovely paired with yellow Perch Table Lamps from West Elm.

What do you think? Is this style stolen from the Melissa and Joey set one that you could live with? What television shows or movies feature interior design styles that you’d love to recreate in you own home? Send me your suggestions, and I’ll put together some mood boards!