When I was in elementary school and junior high, I took sewing lessons and learned all the basics, but until last year, I never owned a sewing machine of my own. Over the years, my mom {who is a very talented sewer} asked me many times if I would like a machine, but I always said no because I had no where to put it and knew that I wouldn’t really use it if I had to drag it out to the kitchen table and then put it away each time.

I knew that in order to justify owning a sewing machine, I needed to have a dedicated space where I could leave it set up all the time. Last year, I finally came up with a plan to steal a little space in our house to create a sewing station, so I asked for and received a sewing machine for my birthday. 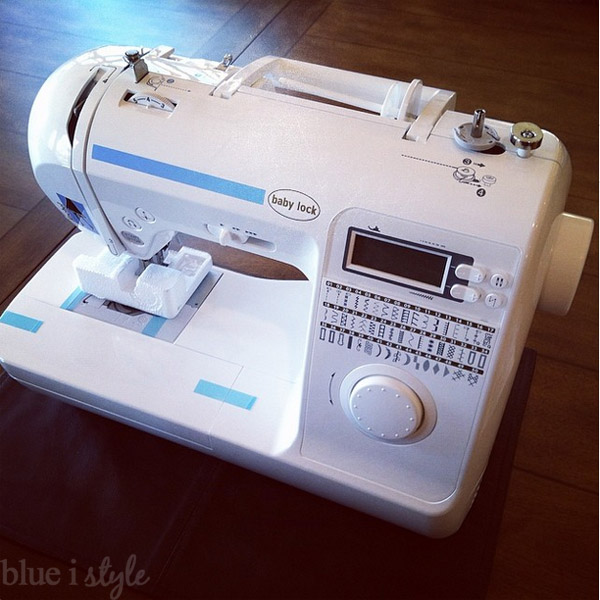 But it has been nearly a year since my parents gave me this Baby Lock sewing machine, and I have barely used it because I haven’t yet set up my “sewing room.” That’s why, with my birthday right around the corner again, I have resolved to move forward with my sewing station plans ASAP!

So, where will I be sewing soon? Right in the corner of our master bedroom… 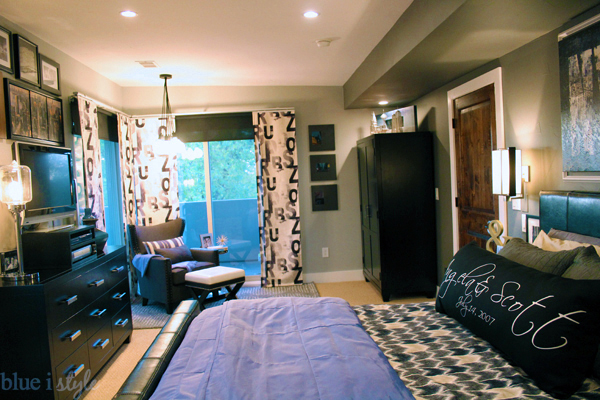 Inside this armoire to be exact… 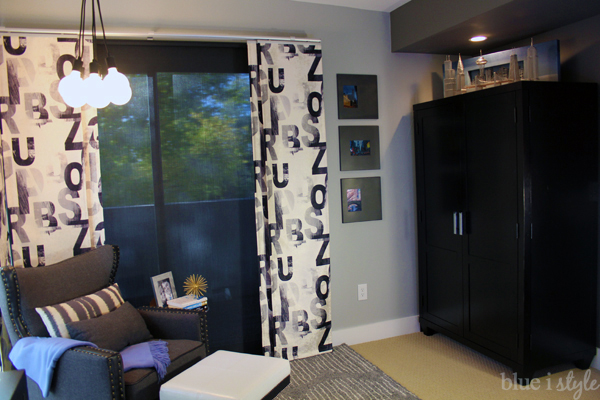 When we lived in a small condo downtown, that armoire was vital storage space for a lot of our clothes, but once we moved into our current home six years ago, we had plenty of closet space and the armoire went mostly unused.

Then, when each of our sons were born, they slept in a cradle in our master bedroom for their first 8 or 9 months. Because their own rooms are on the second floor, while our bedroom is on the third floor, I didn’t want to be running up and down the stairs for every middle of the night diaper change and to get them dressed in the mornings. To solve this problem, I transformed the armoire into “baby central,” complete with a changing pad, hanging space for mini clothes, and blankets and other baby essentials tucked neatly away in the drawers and on the shelves {read more details here}. 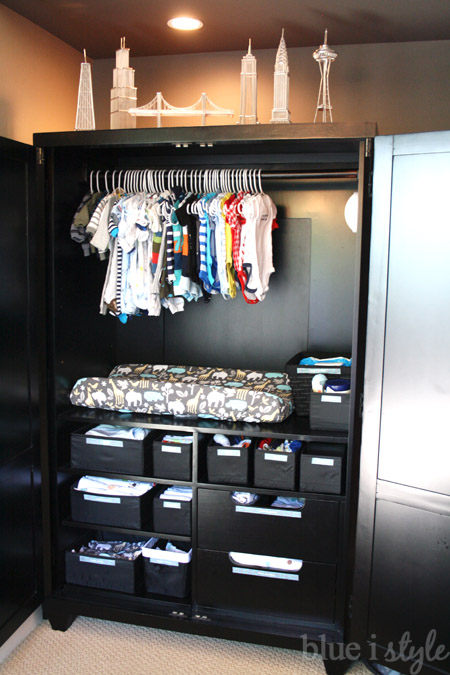 Cooper, our youngest, is now 21 months old, and has been in his own room for over a year – leaving the armoire once again unused. But not for long… I have big plans to transform this armoire in to a very functional, compact sewing space.

I’ll be able to open the doors and have everything I need right at my finger tips, and, best of all, when I need to take a break mid-project, I’ll simply shut the doors and hide the mess away!

As I draw up plans in my head, I have spent a lot of time on Pinterest searching for small sewing space inspiration. Below are twelve of the fantastic spaces that immediately caught my eye! Most of closets and armoires in my inspiration photos were actually designed specifically for sewing, but a few are general craft of office spaces that could easily house a sewing machine. 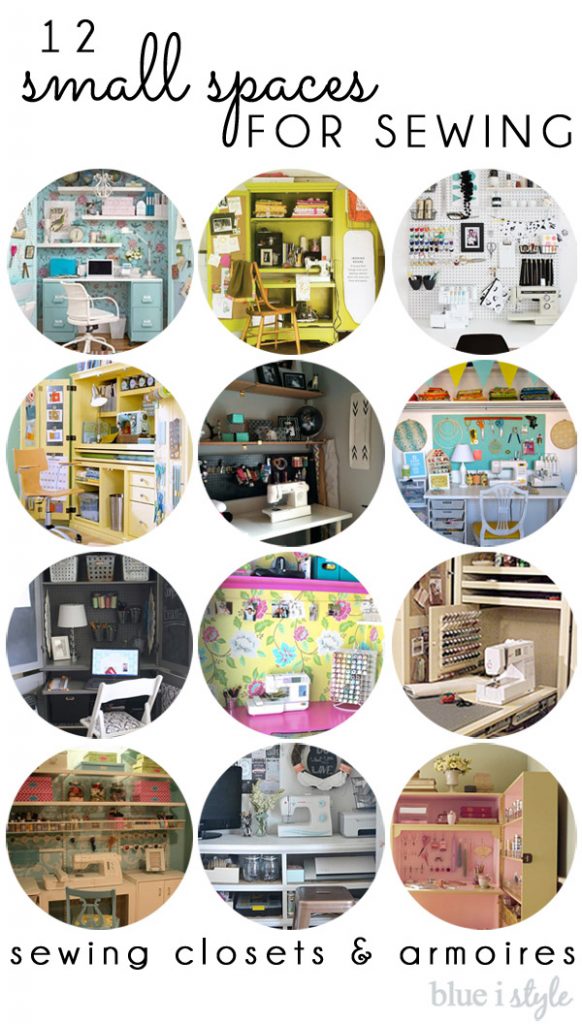 This striking black and white sewing space might be my favorite because it’s so bright and simple!
I am fortunate that my armoire is located adjacent to two large sliders where it gets great natural light, but I know that I’ll often be sewing at night after the kids have gone to bed, so I’ll need good artificial light as well. The small battery operated light that we added for late night diaper changes certainly won’t cut it, especially inside a black armoire.
To brighten up my armoire, I intend to paint the inside, and will also be adding a much brighter light. I am not sure yet whether I’ll paint the inside white, or possibly a soft color – like the pink in this next inspiration photo.
These next two cheery space looks like a great places to sew, but since I am working with an armoire, instead of a closet, I won’t be able to tuck my knees under a table like in these photos.

I love all the details of this space sewing closet, but I wonder if the owner really sews in this space, or if she instead moves the machine elsewhere for use. It seems to me like she would be bumping her knees on the shelves while sitting on the stool.

To create some leg room and make sewing more comfortable, I plan to add a pull out shelf, as is illustrated in these next couple of photos.

In addition to painting the inside of my armoire to bring in more light, I also want to add some fun splashes of color for a creative and inspiring work space. I am not a particular fan of the floral pattern in this next pace, but I love the bold use of color!

Since I am working with such a small space, I definitely need to make every inch count! In addition to my sewing machine, I also want the armoire to house all of my notions, as well as my small {but growing} collection of fabric. That will require taking advantage of every available inch, including the back of the armoire, and the inside of the doors.

In the next photo, the armoire is being used as a desk, rather than a sewing cabinet, but I like the way the peg board has been used to maximize storage space, and the chalkboard on the door is a great idea as well.

And here’s another peg board example with shelves above.

I’ll have to consider if there is enough depth in my armoire to add some narrow shelves in the back, and whether the vibration of the machine inside my cabinet would cause items to fall of the shelves. Maybe shelves with a lip on the front would be the best solution?

These final two photos are great examples of using various materials to maximize the space on the inside of the doors – including peg boards and magnet boards!

There is so much to see in each and every one of these inspiration photos. I’ll definitely be studying all of the different forms of organization as I determine the best way to make my armoire function like a sewing room. Additionally, I have some creative ideas to create cutting and ironing space that can also quickly hide away.

I’m hoping to get started on the makeover of my armoire very soon, and I’ll certainly be sharing all the details along the way!