When I found out last year that my dear friend, Corrie, was expecting a baby, I knew I wanted to throw a fabulous baby shower for her. Corrie is a Denver native, but has been living in Seattle for a few years now. And since baby’s gender was going to be a surprise, I thought it would be fun to host a gender neutral celebration themed around the baby’s Northwestern birth place. So with a teal and yellow color scheme, and lots of clouds, raindrops and umbrellas, I put together a rain shower themed baby shower that brought a little Seattle-charm to the Mile High City of Denver. 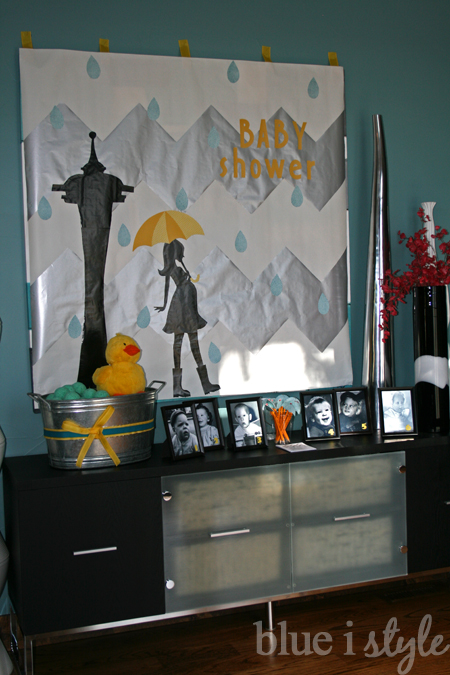 What would a Seattle themed shower be without rain clouds?  So to make it rain, I made white tissue paper pom poms and hung a string of raindrops below each using clear thread. Each cloud was suspended from the ceiling using a mini clear 3M command hook and more clear thread, making them easy to put up and to remove. 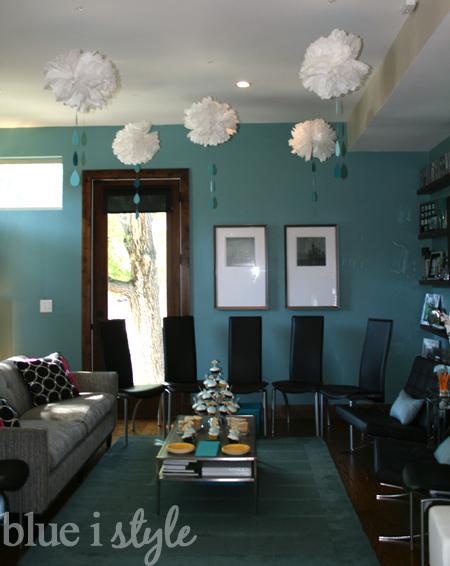 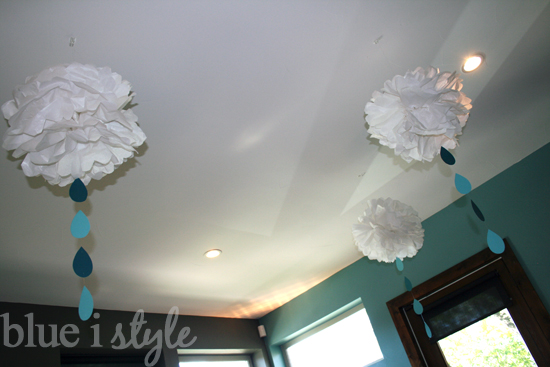 Two more rain clouds hung over the lunch buffet, with two white umbrellas below on either end of the table. 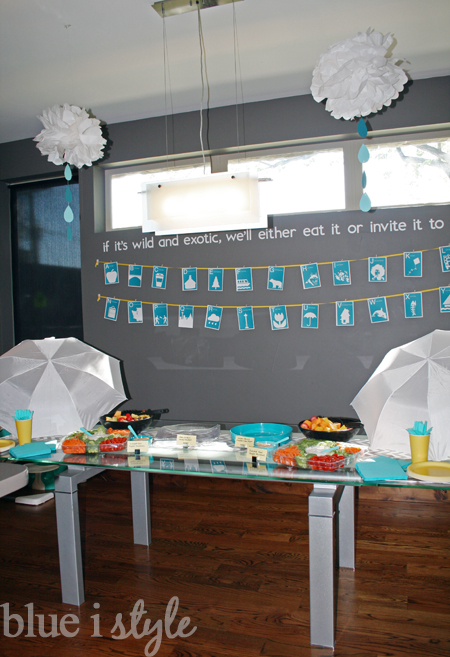 On the wall behind the kitchen table I strung up a set of Seattle alphabet flash cards.  I purchased the digital file for the flash cards from Kelly at StudioDIY.  She emailed the file to me, and then I adjusted the color to match the other teal shower decorations and printed the cards onto cardstock.  I then strung the flash cards along yellow ribbon with mini clothes pins.  After the shower, Corrie took the flash cards home for baby. 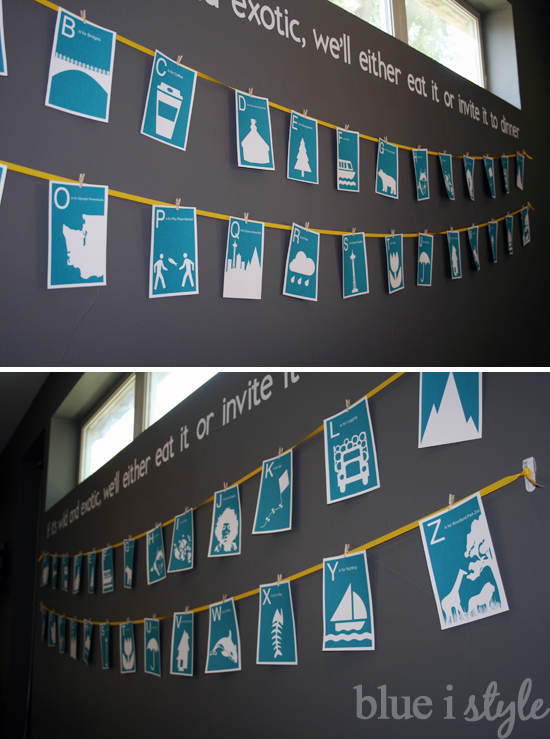 For lunch I served two kinds of crescent roll-ups – one with ham, swiss and honey mustard, and the other with chicken, broccoli, red pepper and cheddar.  They were pretty simple to make, but got rave reviews.

To keep the rain shower theme going, I added clouds to grey striped straws.  I simply used a cloud shaped paper punch on white cardstock, and then used a standard round hole punch in the middle of each cloud, which was the perfect size to slide the clouds onto the straws. 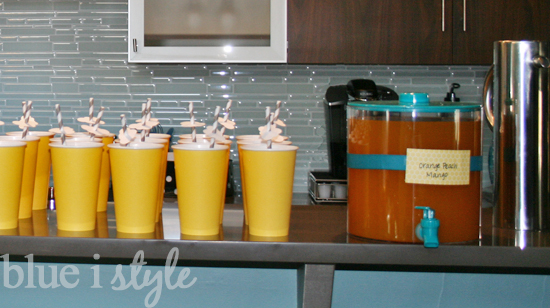 With lunch served in the kitchen, I set up the dessert station on the coffee table in the living room (right in the center of the action – where dessert always belongs).  I frosted all of the cupcakes in white frosting and added bright blue candies to look like raindrops.  Each cupcake was finished off with a yellow umbrella pick.  I can’t take credit for these umbrellas, as I found them on Etsy {supply list below}.  I ordered the cloud shaped French sablee cookies from a local bakery, and I finished off the dessert display with a metal sculpture of the Space Needle that I already owned. 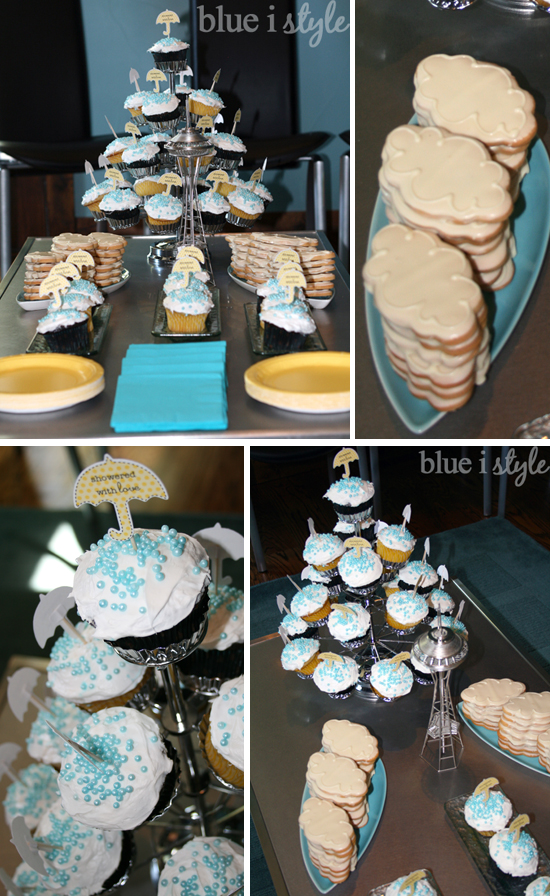 Rather than setting up a traditional gift table, I used by son’s cradle to hold all of the gifts.  Fortunately my husband was a good sport about carrying it down two flights of stairs, because that cradle is MUCH heavier than it looks!  I used sticker paper to spell out “GIFTS” on five white onesies that I strung across the front of the cradle, again with mini clothes pins and yellow ribbon. 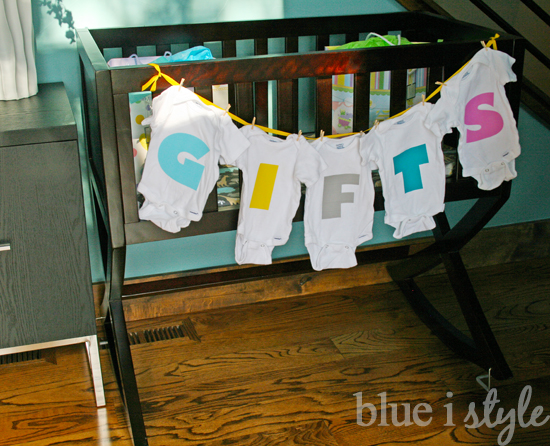 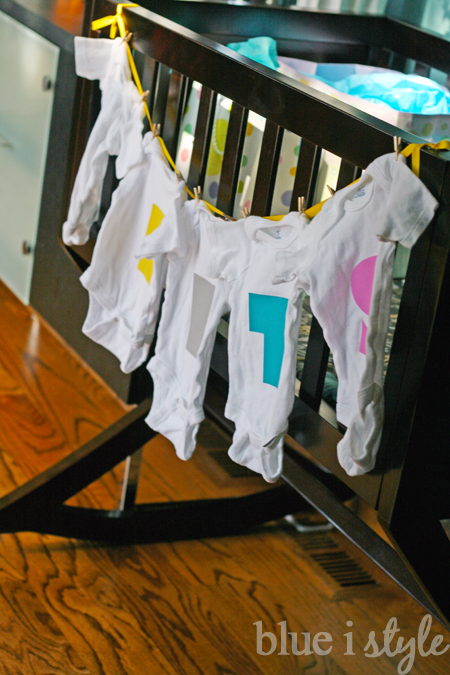 We played a few different games at the baby shower, including one where each guest was asked to identify the parents-to-be and grandparents-to-be from their baby photos.  I didn’t want it to be too obvious who was who based on older photos being black and white, so I opted to print all of the photos in black and white, and even added a little “noise” to the newer photos in Photoshop to make them look a bit more aged.  I placed each photo in a frame from the Dollar Store and made number stickers for the corner of each frame.  I asked each guest to fill out a form identifying each baby, and I was surprised that even some of the family members were challenged by the “Baby Face” game. 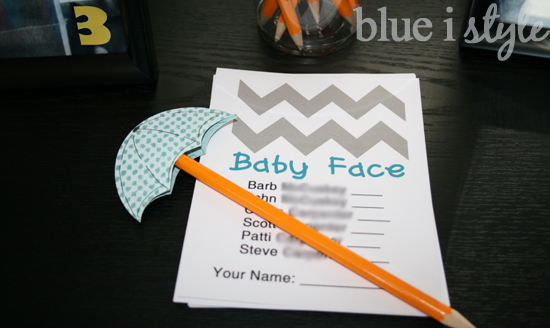 And how fun are the pencils-turned-umbrellas?  To make these, I used my large Fiskars circle paper punch to cut out circles. I then folded each circle in half and cut a scallop along the folded edge.  This created the shape of the bottom of the umbrella, while providing me with two identical halves for each side of the pencil.  The scrapbook paper I used was double-sided – dots on one side, swirls on the other – making it quick and easy to create two different patterns of umbrellas.  I used a fine-tipped black marker to add some detail to the umbrellas and used small scrapbook glue-dots to affix the umbrellas to the pencils, and to hold the tips of the umbrellas together. 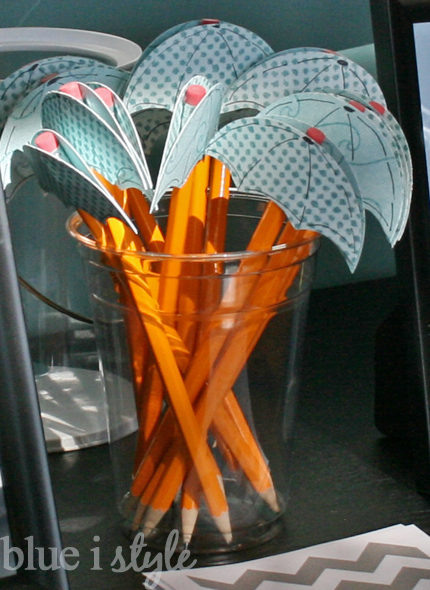 I wanted to send each guest home with a little something to thank them for coming, so I purchased teal colored bath bombs, wrapped them in matching organza, and tied them up with yellow ribbon.  For a fun way to display the favors during the shower, I placed them all in a galvanized metal tub and perched my son’s stuffed ducky on top.  Just like that – a duck splashing in a puddle – perfect for the rain shower!

Finally, I wanted Corrie to have something special to remember her baby shower by, so I asked all the guests to use bright colored Sharpies to sign a white umbrella in place of a traditional guest book. 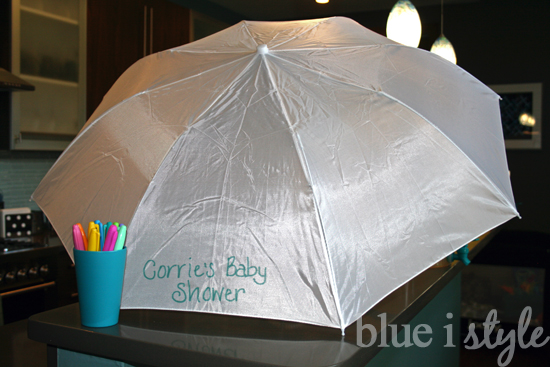 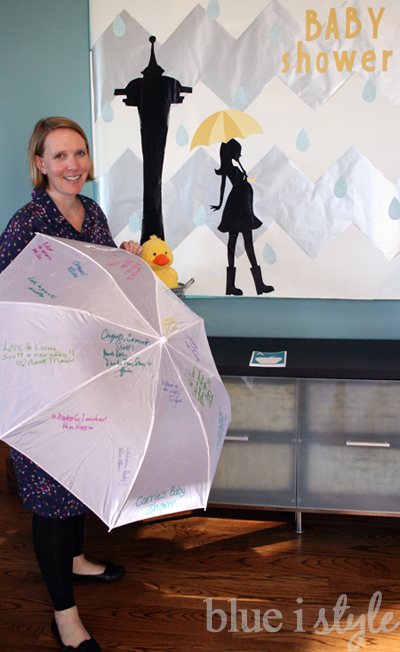 I think the “Shower Shower” turned out to be a lot of fun!  Corrie has since had her baby – a little girl – and I am finally going to get to meet her for the first time later this month!  I can’t wait!!