I’m working with a new client who has a very hip house near the city, with a modern and colorful vibe. We’re starting from scratch on a few rooms in the house, and sprucing up a couple more. Transforming the rooftop deck is his top priority, so we’re hurrying to finish it in time for him to enjoy a couple of months of warm patio weather before fall arrives. 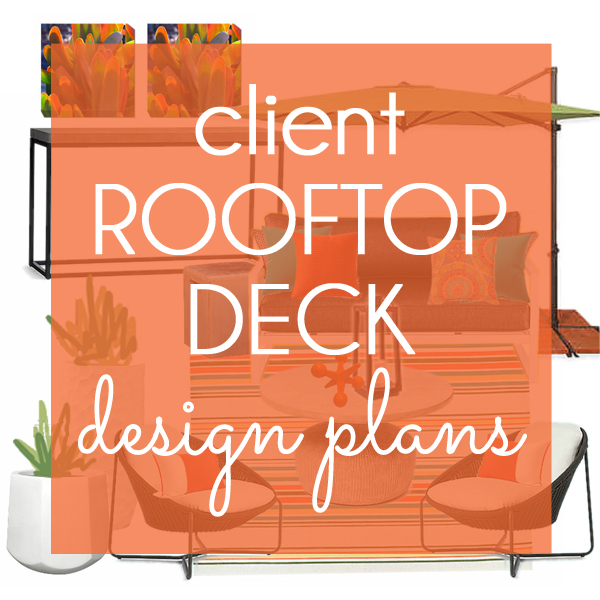 I love working on design projects, and this time around I wanted to get you guys involved in the fun as well! Over the last couple of weeks I’ve asked you to share your opinions on Facebook and collectively create a rooftop deck design by voting first for your favorite outdoor rug, then couch, chairs, and finally an outdoor coffee table. I absolutely loved seeing what you guys chose in each round of voting, and hearing your thoughts about the options!
As promised, today I’m going to show you the initial plans that I put together for my client’s rooftop deck, as well as the final version of the plan after the client provided his input.
Let’s start with some context. The client’s house is half of a relatively new duplex in a popular urban neighborhood. It’s built on three levels, and the top floor includes a guest room and bathroom, as well as a bar that opens out onto a rooftop deck with west-facing Rocky Mountain views. 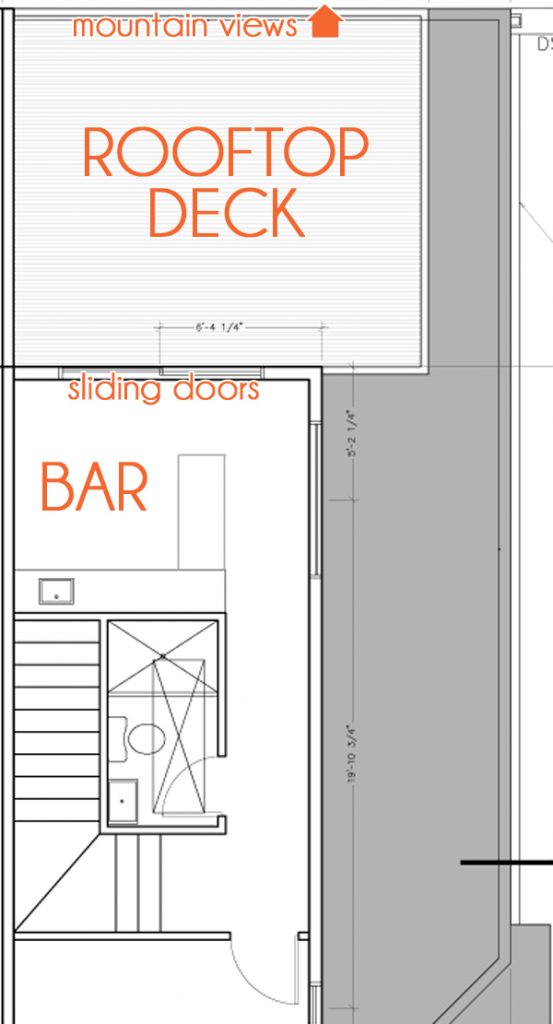 The bar has a vibrant orange countertop that reflects the owner’s fearless approach to decorating. My favorite of all design approaches! 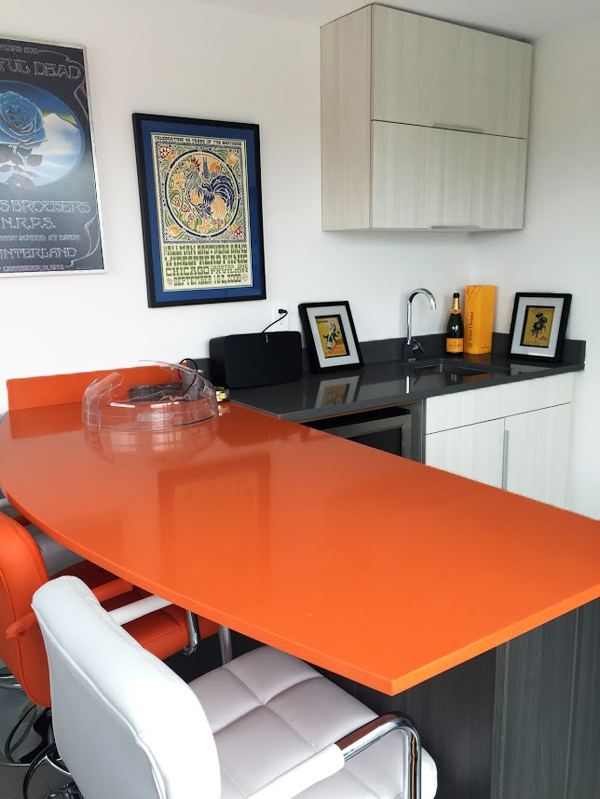 Just beyond the end of the orange countertop is a sliding glass door that leads out to the rooftop deck – a space with a current vibe that could best be described as abandoned. 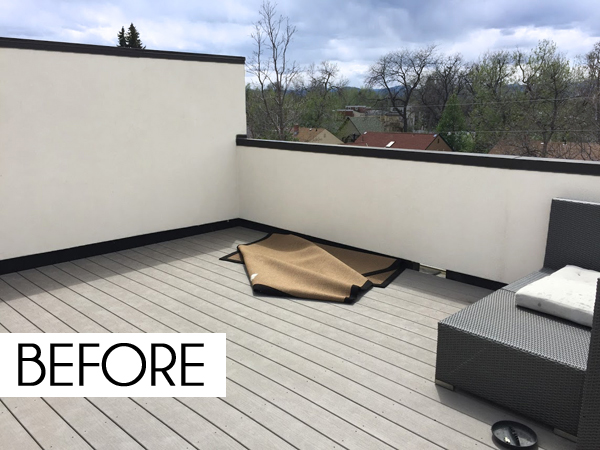 But this rooftop deck clearly has tons of potential! It just needs a little vision, comfy furniture, and some vibrant color to turn it into the coolest spot in the neighborhood! 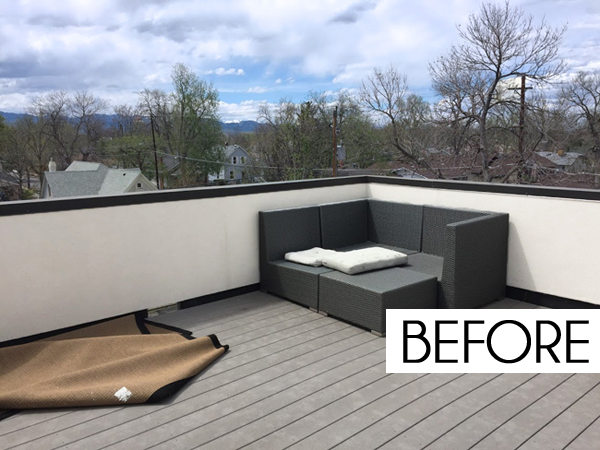 The tall wall on the left side divides the deck from the neighbor, and it was definitely calling out for some way to dress it up! 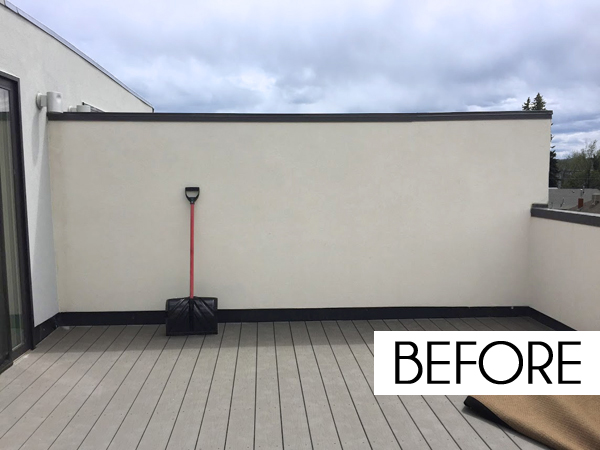 When I’m designing a new space, I always like to start with an idea of how the space needs to function, and one key design element to build around. Let’s talk about the key design element first. I knew right away there needed to be at least a touch of orange in the patio color scheme, to tie in the bar countertop. The client also has of shades of teal throughout the house, and I noticed a lot of blue in the two band posters hanging in the bar.
With these colors in mind, I started shopping for a large, outdoor rug. These were five of my favorites: 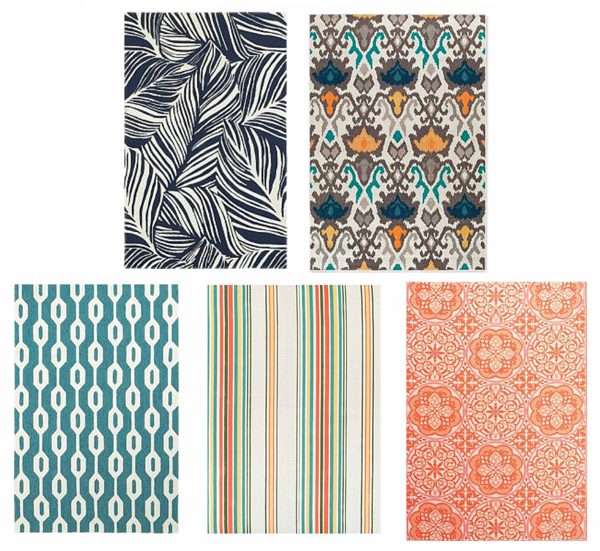 SOURCE LIST: (contains affiliate links) Blue Tropical; Multi-Color Ikat; Teal Graphic;
Stripes; Striped Rug; Orange Rug
I like the blue, tropical vibe of the first rug, and the color would tie in nicely with the posters in the bar, but I wasn’t sure it fit the client’s style well enough. The same was true of the multi-colored ikat rug – the colors were perfect, but it’s more my style than his. The last option – the orange rug – felt like too much orange. With it narrowed down to the teal graphic rug and the striped rug, I liked that the stripes brought together all of the colors that I wanted to incorporate in the design, so I began designing the plan around that rug.
For the deck, I knew that it needed to provide lots of seating for entertaining, while still feeling intimate enough for a smaller group of friends to just sit around and chat. Because it’s up on the roof, the client doesn’t plan to ever BBQ or serve meals on this deck, but I did want to provide plenty of space for a spread of appetizers or snacks to compliment the bar.
Here’s the space plan I came up with {the light green square that overlaps most of the seating area shows the coverage that the umbrella will provide}: 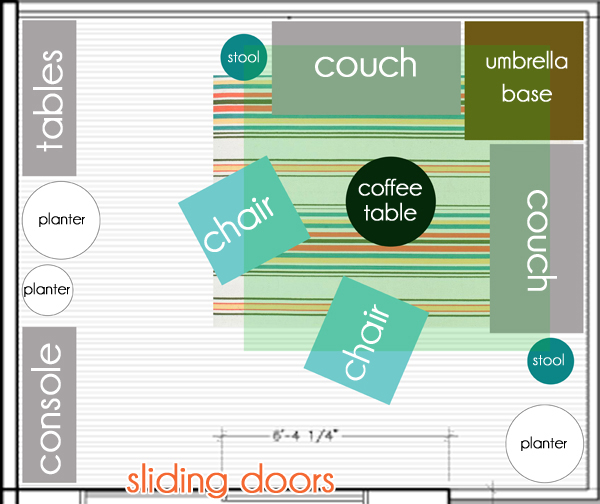 And here’s the proposed design that I presented to the client. Although this design board just shows one concrete console table and one couch, there would actually be two of each in the space {as shown in the space plan}. 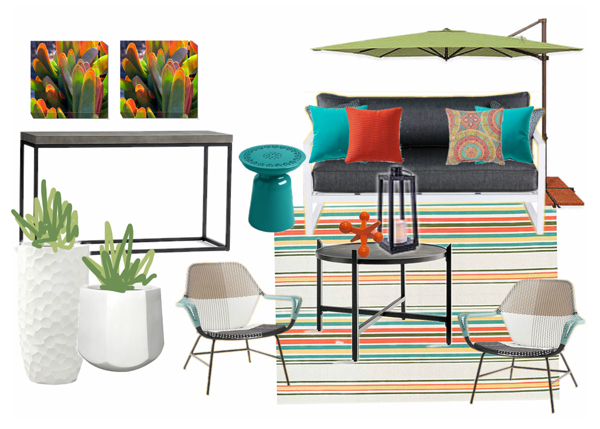 SOURCE LIST: (contains affiliate links) Aloe Outdoor Art; Cement Console Table; Tall White Pot; White Petal Pot; Turquoise Drum Stools; White Metal Love Seat; Medallion Pillow; Orange Textured Pillow; Teal Pillow; Umbrella; Umbrella Base; Striped Rug; Round Metal Coffee Table; Color Block Chairs
I recommended those round, teal stools to serve dual function – acting as side tables most of the time, but providing extra seating for larger groups. I also wanted to add some “green” to the outdoor space without giving the client too many plants to take care of up on the roof. I recommended a few white planters filled with low maintenance grasses, combined with four repeating pieces of outdoor canvases with photographs of aloe that provide a nice pop greenery with a touch of orange.
In addition to presenting my recommended design plan, I always like to give clients a variety of alternate items to consider. Fortunately the client loved the striped rug, even after seeing all of the other rugs options. Since the design was really built around that rug, I was so glad that I pegged his style just right on that one!
One of the alternate coffee tables did immediately catch the client’s eye. I thought he might pick the fire table, but it was the cement coffee table that he fell in love with, so we swapped that out in the plan. 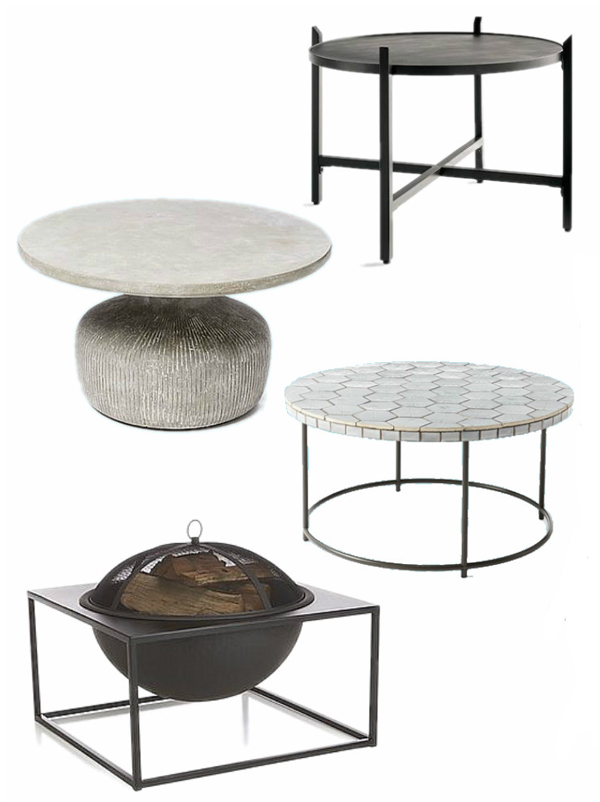 The client was also not totally sold on the color block chairs that I used in my plans. After debating on numerous options, we found some chairs that he really loved – the Morocco Round Chairs. The white cushions on these chairs tie in nicely with the white metal frame of the couches, and their unique shape will add a lot of design interest on the deck. 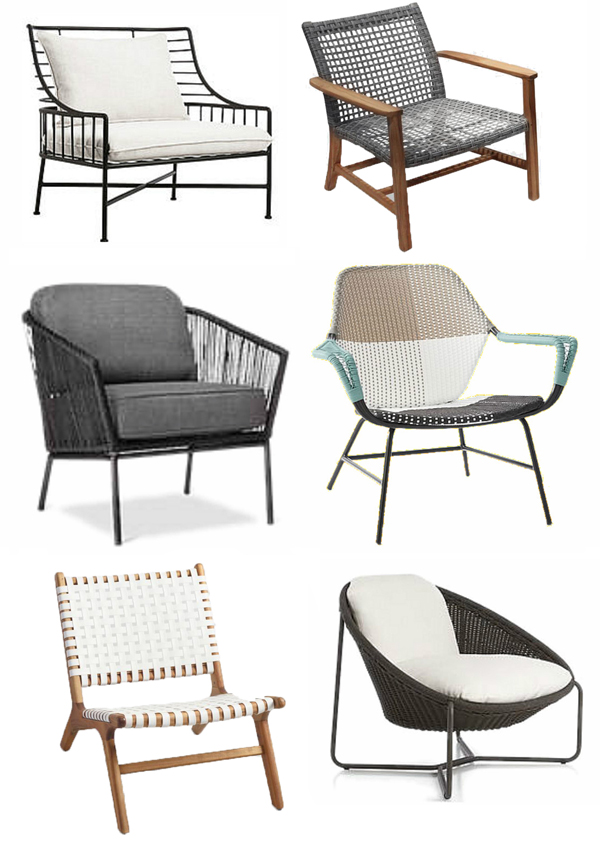 SOURCE LIST: (contains affiliate links)
Black Metal with White Cushions;
Gray Woven; Standish Chair Set; Color Block Chairs; White Woven; Morocco Round Chairs
The only other tweak we ended up making was to swap out the round, teal stools for Carilo Blue Square Stools. With those changes made, here’s the final plan that we are currently working to implement: 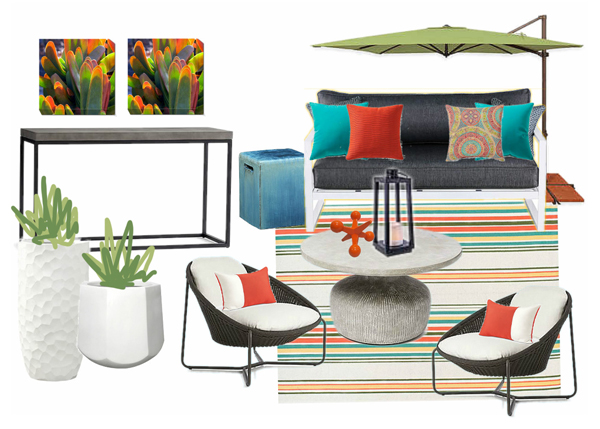 And now, here’s the really fun part! Let’s see how this compares to the plan that you guys created by way of your Facebook votes. Scroll through the images below and you’ll see how the popular Facebook picks came together to create a unique rooftop deck design. 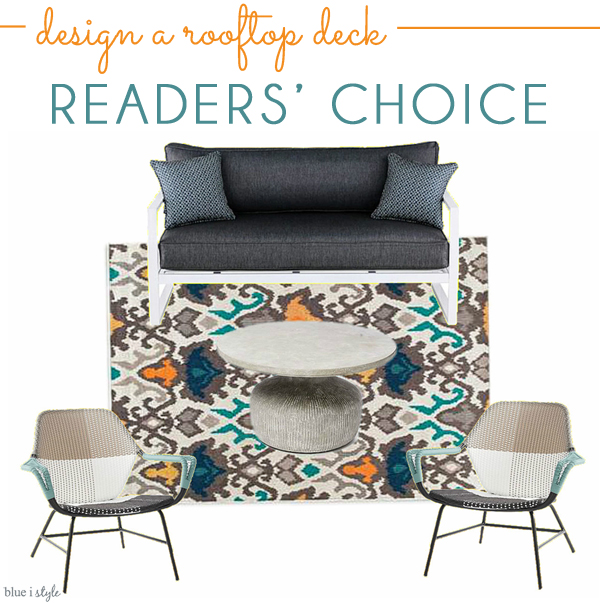 SOURCE LIST FOR OUTDOOR COUCH OPTIONS: (contains affiliate links)
Outdoor Wicker Couch; White Oval Couch; White Metal Frame Couch; Beige Outdoor Couch
SOURCE LIST FOR READERS’ CHOICE DESIGN PLAN: (contains affiliate links)
Ikat Rug; White Frame Outdoor Couch; Color Block Chairs; Concrete Coffee Table
Thank you guys so much for playing along with me on Facebook over the past couple of weeks. It’s been so fun hearing your opinions and your insights on what you’d pair together and why. It really helps me to hear how others think about design!
You guys seemed to be having a good time with it too, so I think we should do more of this design voting. I’m also designing two guest rooms for the same client, so keep an eye out over the next few weeks on Facebook for some bedroom decor voting, and then I’ll share the final plans here on the blog!
Until then, here are the plans in a pinnable form in case you want to save them: