You know that list of “must have” wedding photos that most couples give to the photographer in advance of the big day? Things like the bride’s mom helping her zip up her dress, the groom’s expression as the bride walks down the aisle, the cutting of the cake, and a close up of the wedding bands.

Yeah…we forgot to make a list like that. We planned every detail of the wedding to a T, but giving the photographer a list of photos didn’t even cross our minds.
Our photographer did a wonderful job of capturing our wedding, but it wasn’t until the very end of the night {after the photographer had left}, as Scott and I were getting ready to pull away in my dad’s convertible Thunderbird, that we realized that we hadn’t taken a single photo of our wedding rings.
Several friends were taking photos of us as we got into the car to leave the reception, so at the last minute we decided to put our hands in the air to capture at least one ring photo before the night was over. 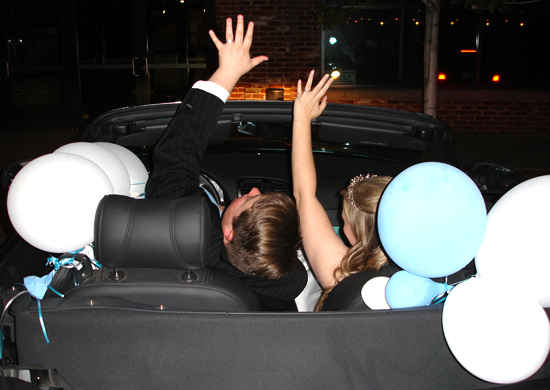 That spur of the moment photo is actually one of my favorites of our wedding day…and it was also the start of a photo tradition that has become very special to us!
The day after the wedding we boarded a plane to Greece for our honeymoon, and we spent the first few nights at a hotel in the historic Plaka district of Athens. On our last night in Athens, we were on our balcony enjoying our view of the Parthenon when we decided to take a photo of rings to document our honeymoon. We didn’t yet know how to use our fancy camera very well, and we didn’t manage to get a very clear photo, but we captured the moment, nonetheless. 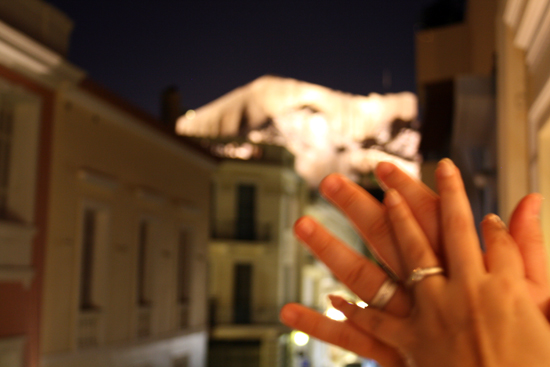 A few days later while enjoying a glass of wine and waiting for the sun to set on the island of Mykonos, we again stuck out our hands and snapped a photo of our wedding rings with the iconic Mykonos windmills in the background. 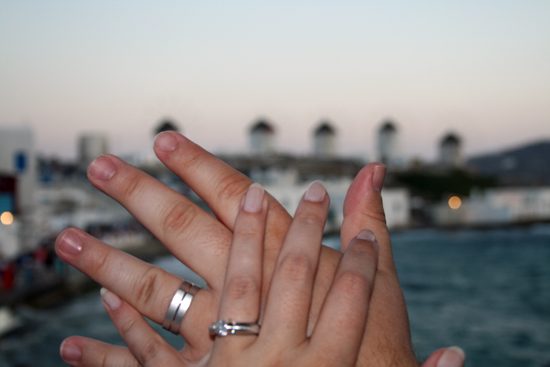 And on the last day of our honeymoon, we captured one final photo of our rings in front of the famous blue domes of Santorini. 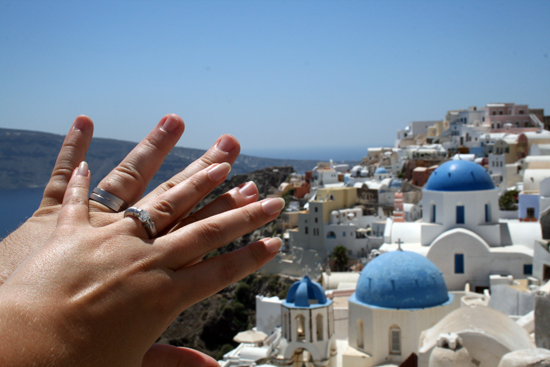 By the time we returned from our trip, ring photos had officially become our thing. I even Photoshopped our three “wedding ring selfies” onto stamps and used them for the cover our our honeymoon photo book. 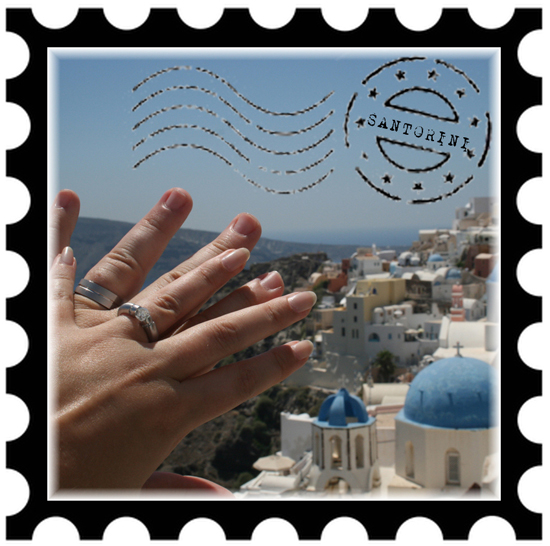 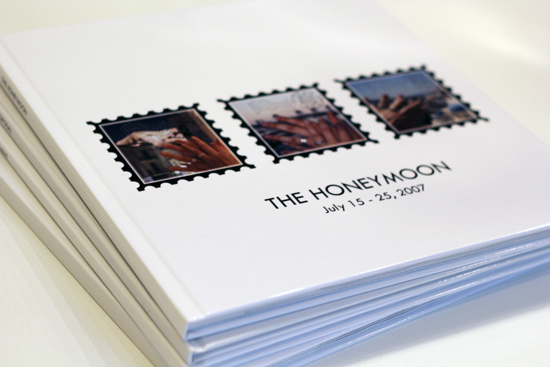 Ever since then, we have continued this photo tradition on major trips. In 2009, our rings visited the Monteverde Cloud Forest in Costa Rica. 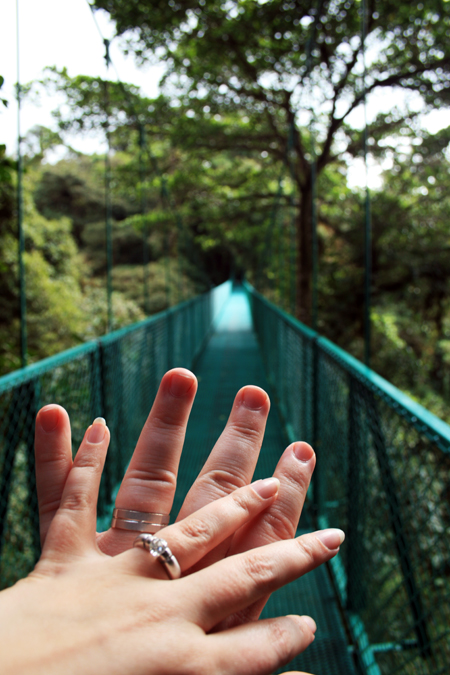 And in 2010 our rings spent Christmas in Spain, where we captured a ring photo at the top of the castle in the town of Segovia. 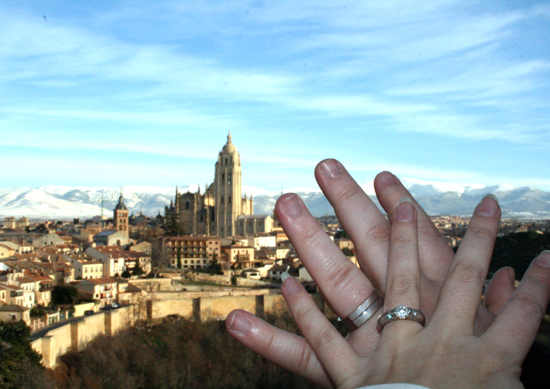 Just a week later, our rings enjoyed the red roof topped views of Lisbon, before visiting the limestone arches and grottoes of the Algarve coast in southern Portugal on New Year’s Eve. 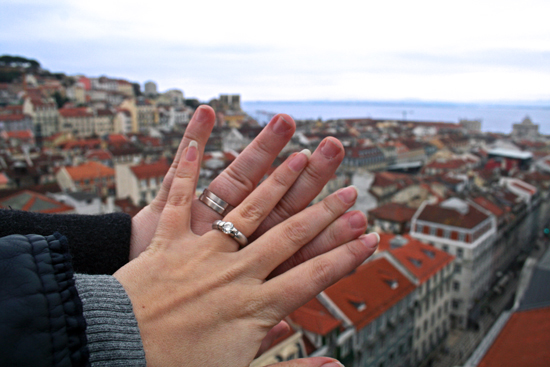 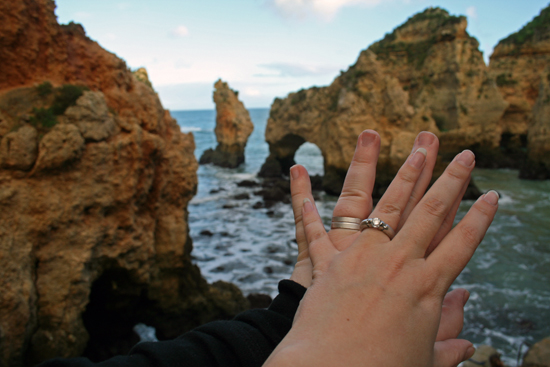 By this point in time, our ring photo travel tradition had become so near and dear to our hearts that we decided to carry it through to other important life events. In 2011, when I was pregnant with Beckett, we asked for a few shots of our rings with my belly during our maternity photo shoot.
When Beckett was born, was asked the hospital’s newborn photographer to take a photo with our rings on his itty bitty baby toes.

In the spring of 2013, when we were expecting baby number two, Scott and I took a short babymoon to New York City. While admiring the views from the Top of the Rock, we documented the trip with a photo of our rings with the Empire State Building in the background. 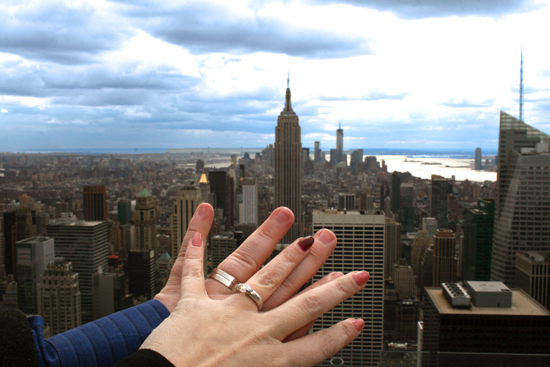 A few weeks before Cooper’s arrival, while posing for maternity photos, we again captured our rings in front of my giant belly!
And just days after Cooper’s birth, we slipped our rings on to his teeny tiny newborn toes during his newborn photos. 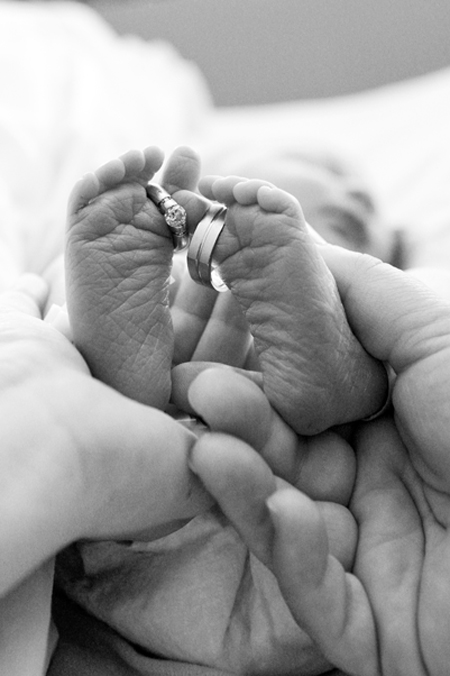 Most recently, Scott and I celebrated our seventh anniversary with an overnight staycation at the brand new Crawford Hotel in the newly renovated Union Station in downtown Denver. On our way out to dinner, we stopped for a ring selfie in front of the historic train station. 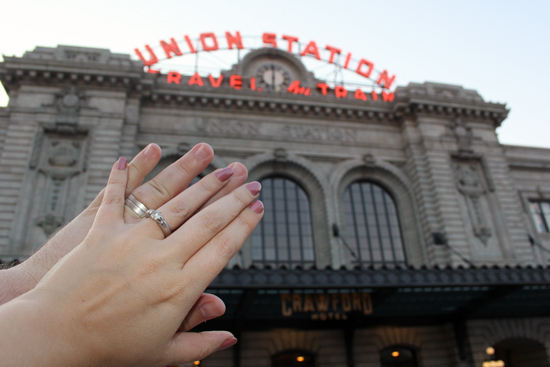 The tradition that began with a spontaneous photo during the last moments of our wedding has become something incredibly special! These ring photos are now a way for us to document all of the momentous occasions in our lives in a way that is fun and unique to us.
Just wait until you see where our rings go next… {Update: click here to see our rings all around SOUTH AFRICA!}