Week 5 of the One Room Challenge is when things finally start to come together! All the little details that I’ve been working on for the past five weeks are falling into place, and the big picture is taking shape! Week 5 is definitely the most exciting in each One Room Challenge, but also the most stressful. The countdown is on but the to do list is still too long.
Here’s a little reminder of where we started… the before picture and the design concept: 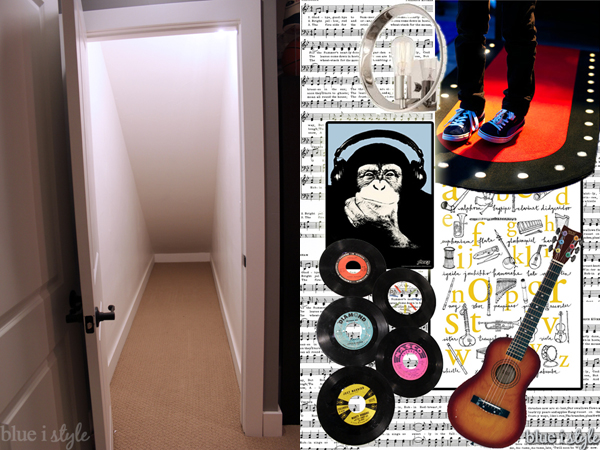 One of the main things that remains to be done in the room is to add some light!

In the original mood board I included a fantastic {but way too expensive} silver circular sconce light. Imagine my surprise and elation when we walked down the lighting aisle at Lowe’s and found this beauty for just $30. It’s so similar to the inspiration light! The Lowe’s light has been discontinued, and we were able to buy the display model right off the wall. 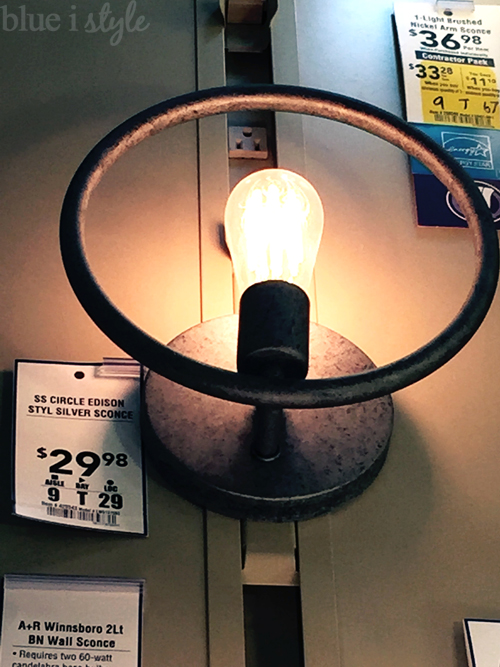 We also made another trip to Ikea to pick up the LED lighted rugs for the space. Cooper had a blast dancing on the red carpet {but he doesn’t know that we brought this rug home; and neither boy has any clue about the playroom that we’ll be turning over to them next week}. 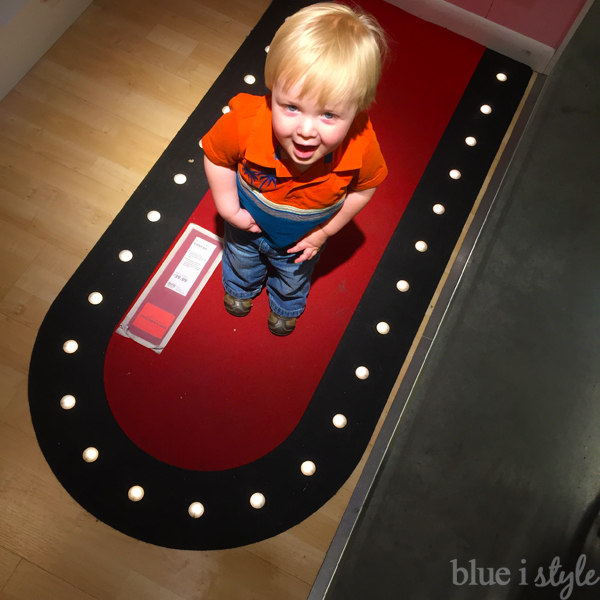 We also have some rope lighting to add to the space. Turns out, rope light also makes fun jewelry! 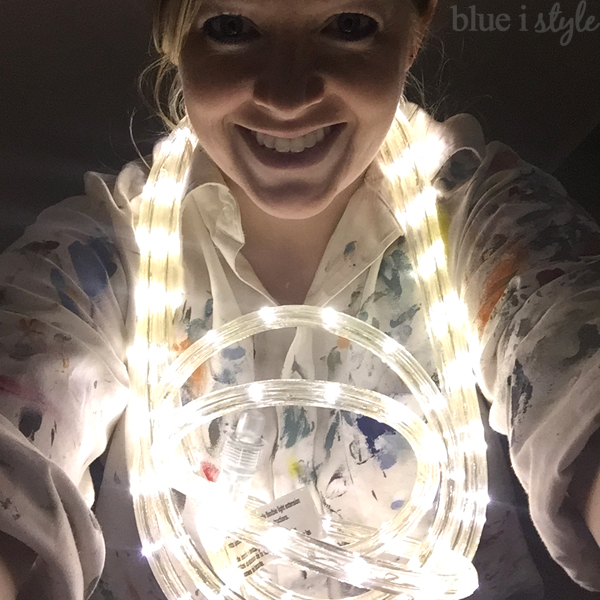 Last week I showed you that the first few rows of records were up on the ceiling… but the rest still need to go up over the weekend {bites nails hoping we have enough time}. I am eager to get this project done, but I’m awaiting some happy mail that is scheduled for delivery this afternoon! When Command found out what we were doing with the records, and our desire to put up all 132 records without making hundred of holes in the ceiling, they wanted to get involved by providing us with enough Command Picture Hanging Strips to affix the records to the ceiling in a damage free manner! YAY! I’ll share the full tutorial in a couple of weeks. 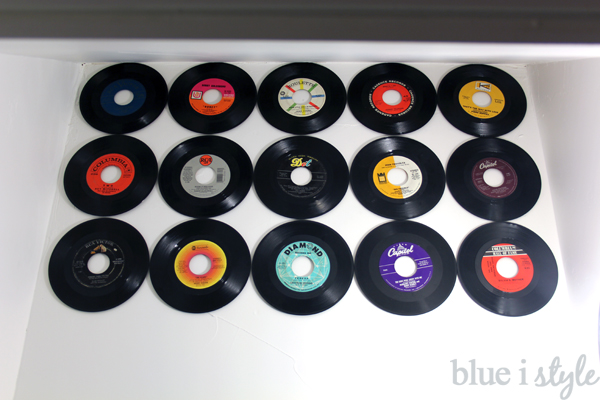 I am so excited to have the opportunity to work with Command because I use their products in almost every project I do. In addition to using the Picture Hanging Strips for the records, I’ll also be using them to secure all the art gallery frames so that the kids don’t knock anything off the wall while playing in the narrow space. I’ll share all the details of this gallery wall in a few weeks – from the planning and the hanging, to the DIY details.
So many other things have been going on in the storage room to playroom conversion in the long, narrow space under our basement stairs, but I don’t want to give away too much before next week’s BIG REVEAL!
Instead, I’m just going to leave you with a few more sneak peek photos… 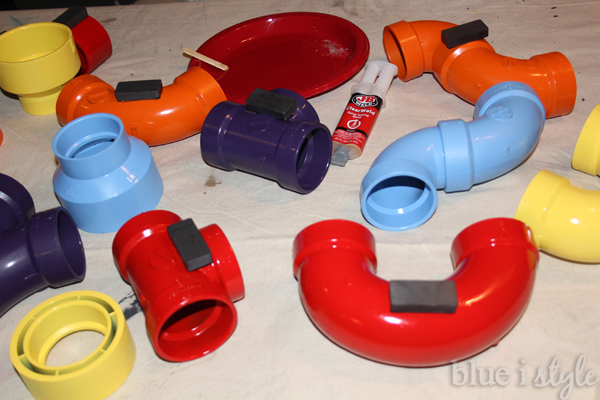 If you follow me on Instagram, then you already know that we are using five colors of Scotch Duct Tape to bring some pops of color to what has, up to now, been a pretty black and white space under the stairs. 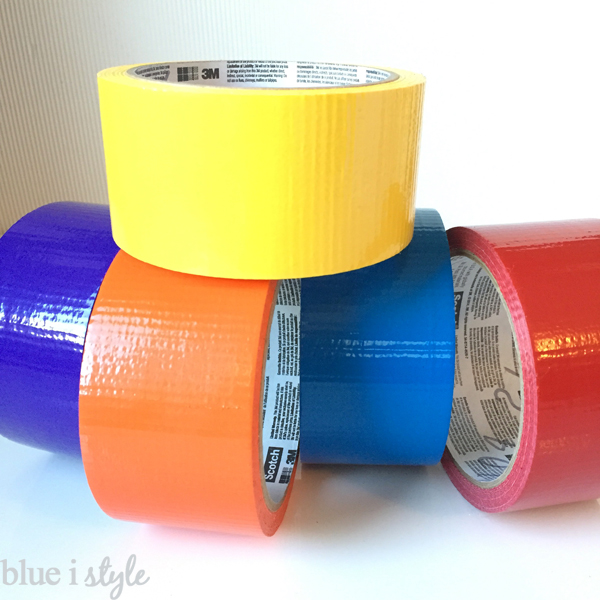 But how we are using all this tape might surprise you… 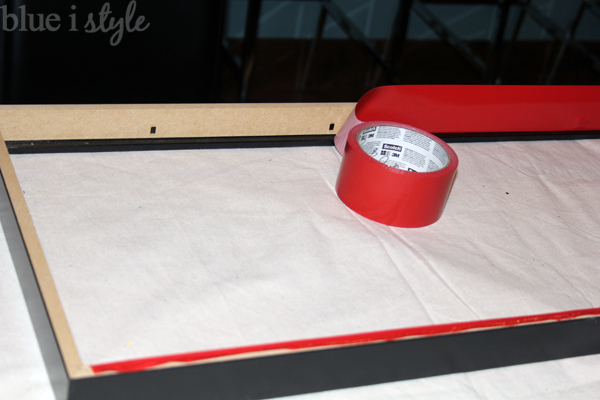 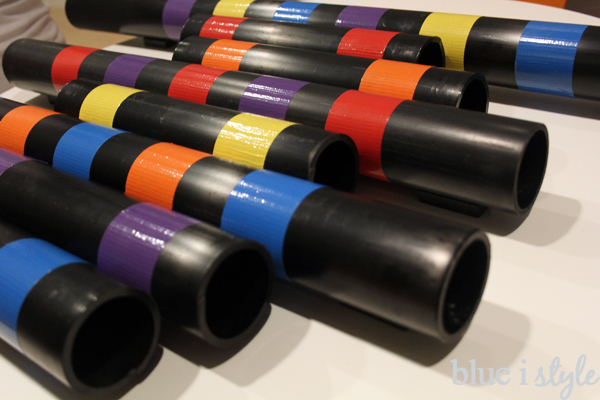 Wish us luck as we work fast and furious to pull this off before next Thursday, when I’ll be sharing the final under stair playroom reveal! In the meantime, be sure to follow me on Instagram if you want a behind the scenes look at the mad dash to the finish line!
If you’ve missed any of the progress updates along the way, you can catch up on my Week 1-4 One Room Challenge posts here {and you can find my 2014 One Room Challenge rooms here}.
Thanks, as always, to Linda at Calling it Home for hosting the One Room Challenge. I’m really not sure how I ever accomplished major decorating projects without it {very, very slowly!}. Be sure to swing by her blog to see how all the other ORC projects are coming along!