It’s week 4 of the One Room Challenge and I finally have some real progress to report! After waiting and waiting for stuff to arrive, we finally started moving stuff out of the nursery this week to make room for the new bunk beds. And just like that we’ve officially entered the “it get’s worse before it get’s better” phase of the ORC. 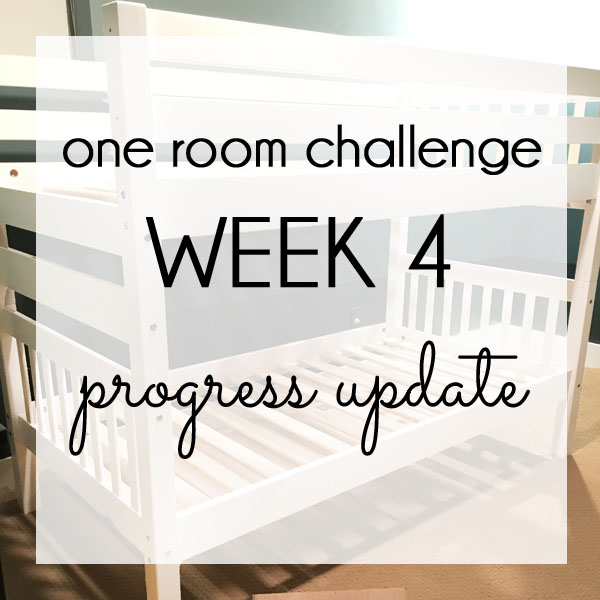 If you don’t know what I’m talking about, let me quickly bring you up to speed. We’re transforming the nursery into a room for our 3 and 5 year old sons who have been begging to share a room for quite a while now. 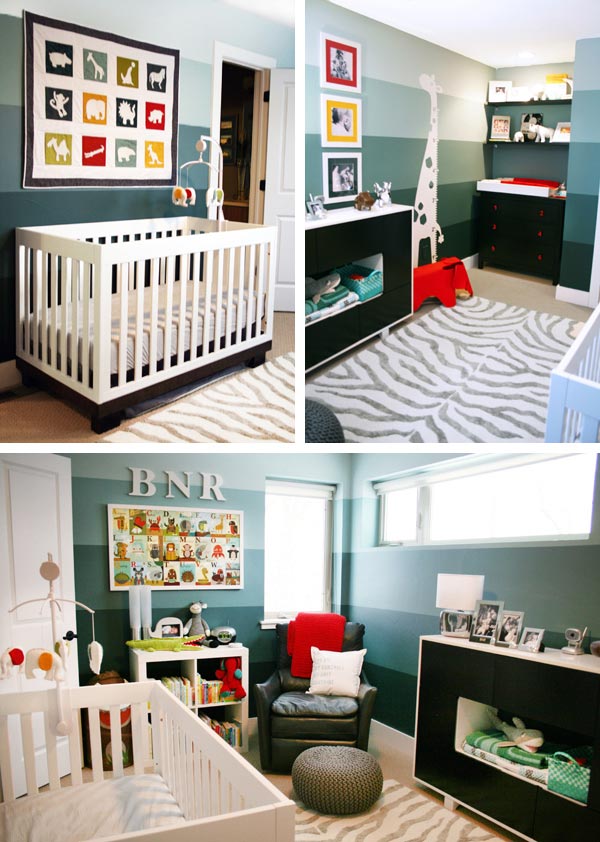 We’re keeping the ombre stripped walls and some of the furniture. Here’s where we’re hoping to be two short weeks from now… 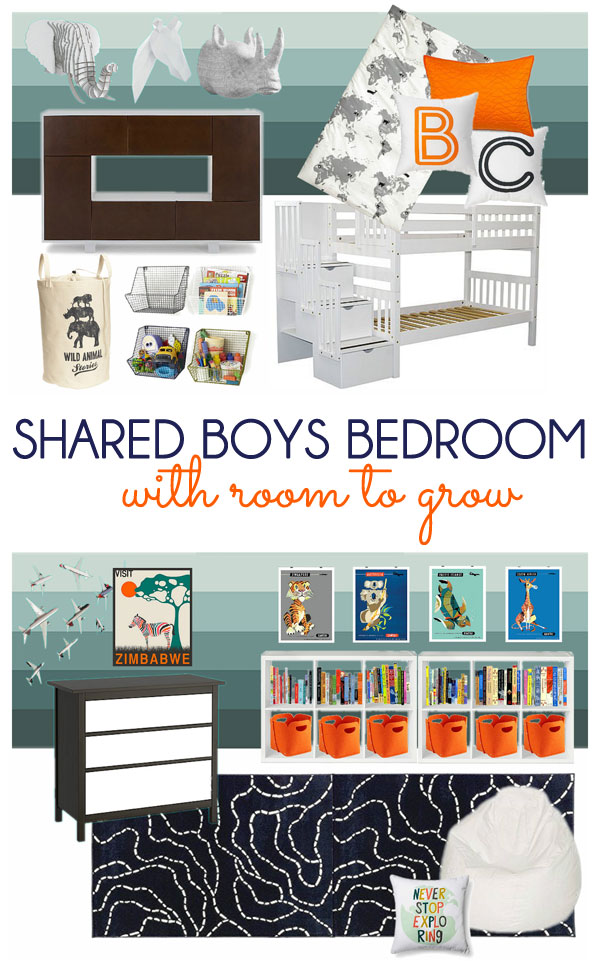 And remember last week when I told you that we were tackling a quick little side project while we were waiting for all of our online purchases for the room to arrive? Yep, I was getting frustrated with our lack of progress in the bedroom, so I took on a quick weekend makeover of the small attached bathroom. In the bedroom, we’re incorporating two of the boys’ loves – animals and transportation – and the bathroom was a great excuse to decorate with their other current obsession – superheros. 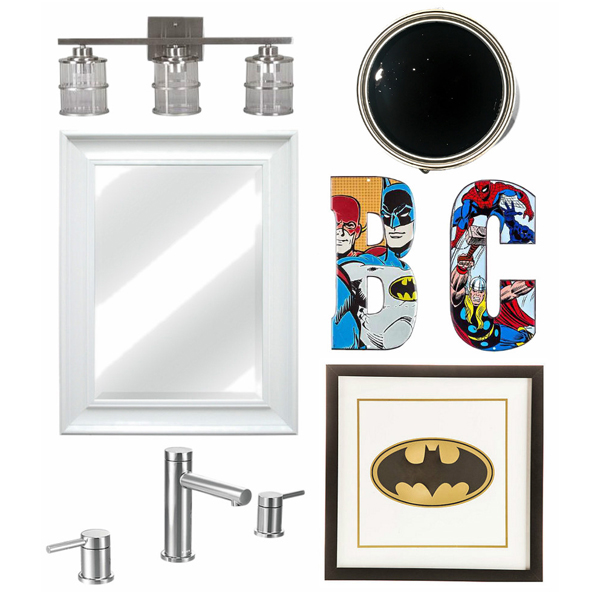 I revealed the bathroom makeover earlier this week, and I’m SO EXCITED about how it turned out! Check out the finished sophisticated superhero bathroom!
Ok, so now that you’re fully up to speed, let’s chat about what we’ve been working on this week. There’s not a lot of pretty photos, but I do have a couple of cute helpers! If you happened to catch my Instagram story on Sunday, then you’ve already seen a lot of this {as well as a couple of really funny videos of my mini-handymen}. I’m going to try to be better about sharing more behind the scenes action via Instagram stories from here on out, so check that out if you like to see more of the not so pretty, real life photos.
We started by removing some of the items that won’t be staying in the room. We’ll be looking for a new home for the gray and white zebra striped rug which is still in great shape… so if you’re in Denver and want it, drop me a line! 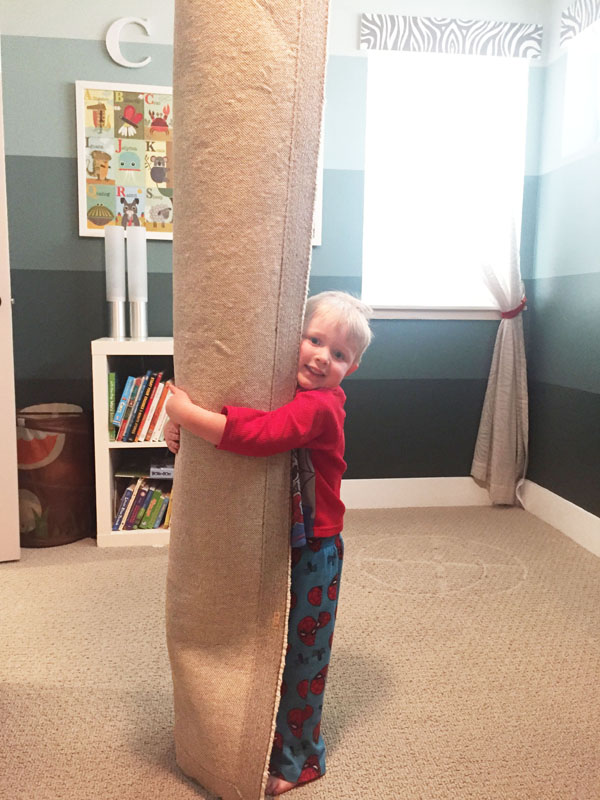 You might notice that the rocking chair is no longer in the corner by the window. I mentioned last week the we needed to move the chair to make room for the bunk beds in this small room, and a few of you were really concerned that we were getting rid of a chair that was so important to our younger son. But as promised, the chair didn’t go far! We just relocated it down the hall to the guest room where father and son are still enjoying it each night before bed! 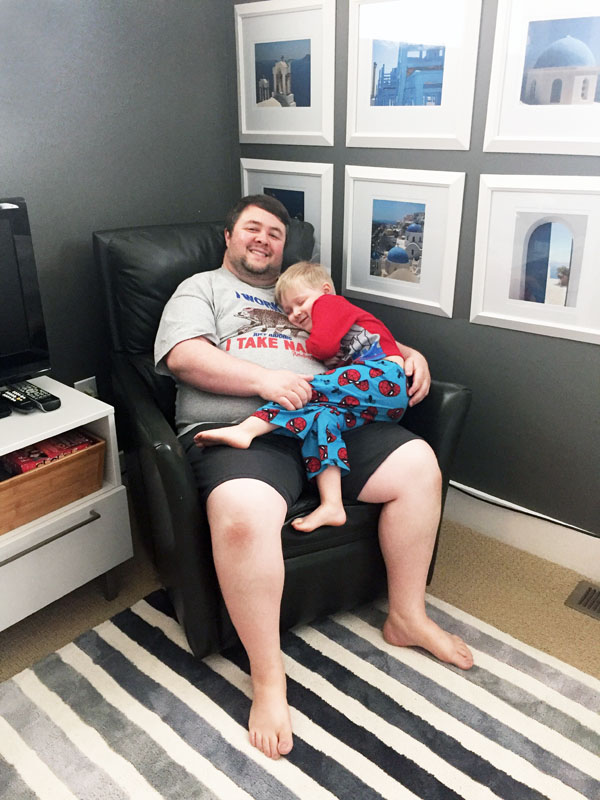 Disassembling the nursery was a bit emotional! We’ve been out of the baby phase for a while now, but this made it feel very official. And yet it seems like just yesterday that we were holding those tiny baby toes. You don’t understand the meaning of “time flies” until you have kids! 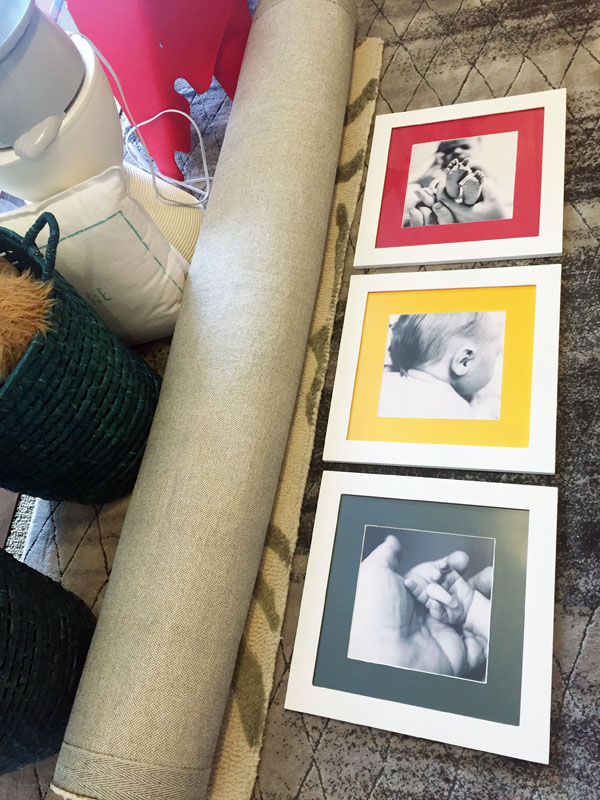 We moved the dresser {which served as a changing station} out of this corner, and took down the shelves. The head of the bunk beds are going to tuck into this little nook. 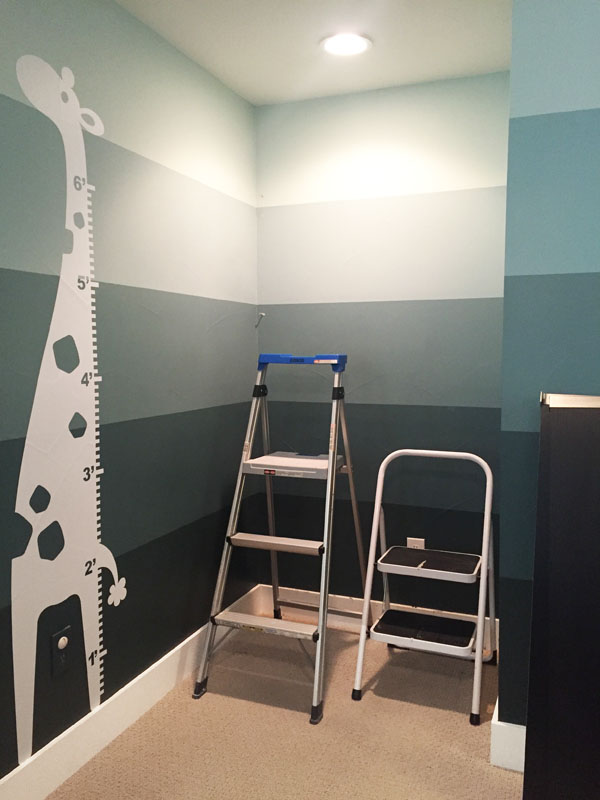 With the room mostly empty, we started patching holes. 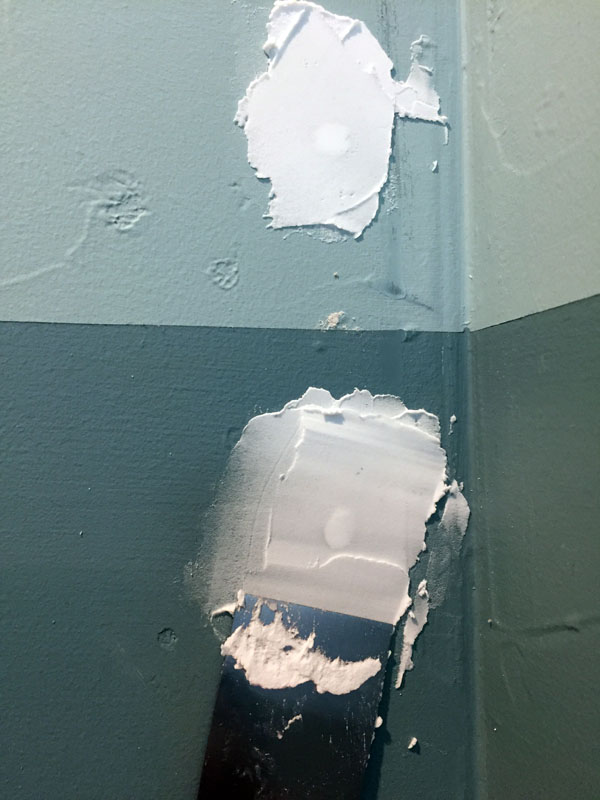 And then came the touch up… 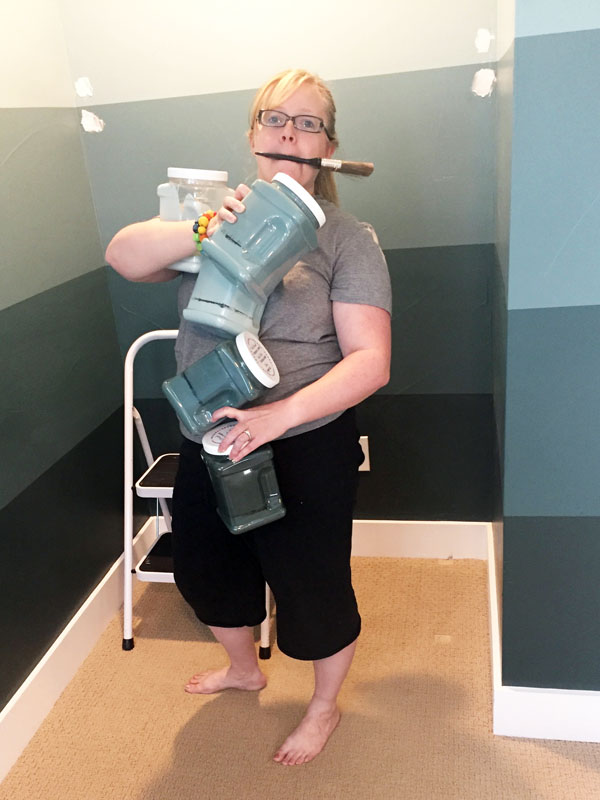 Finally we were ready to start assembling the bunk beds and stairs. 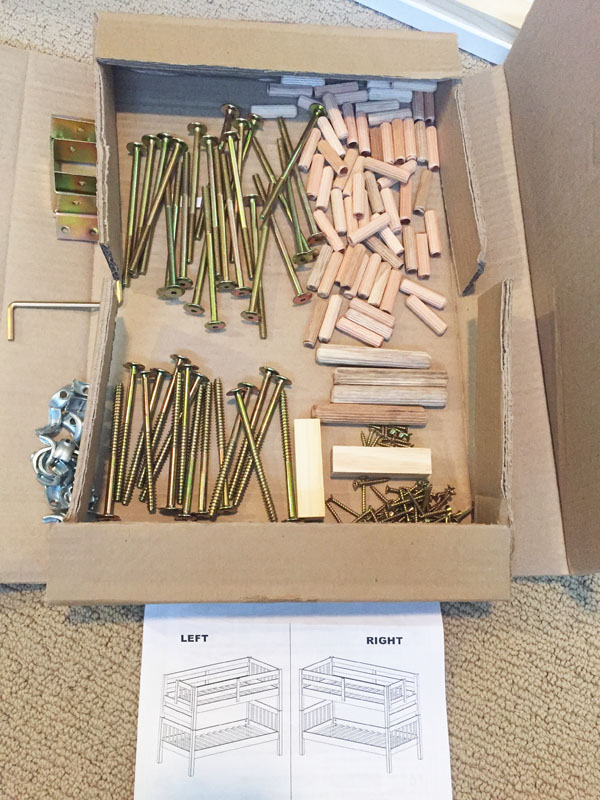 This is now officially the most time consuming assembly we’ve tackled, but the boys sure do love helping! 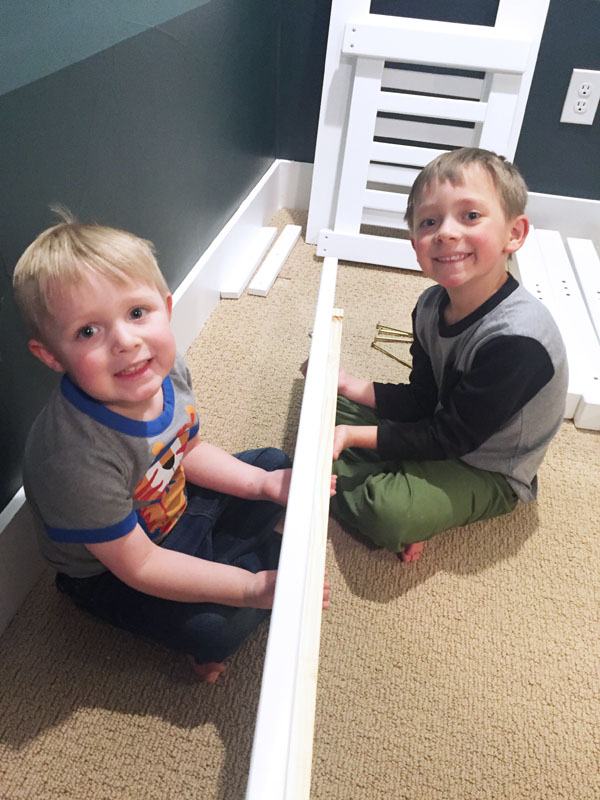 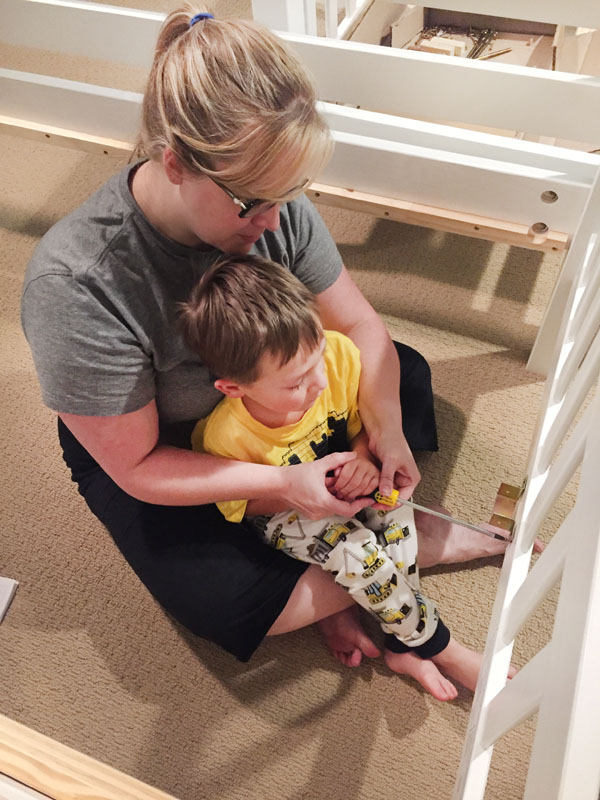 At the end of assembly day one we had two beds, but we just couldn’t bring ourselves to start on the stairs that go up the left side of the bed. 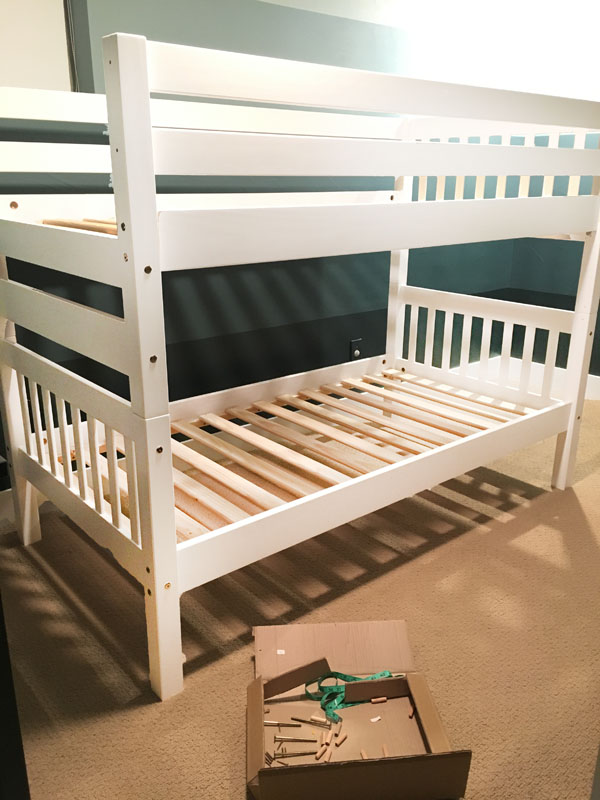 The next day we tackled the stairs, which actually took just as long thanks to the drawers. I HATE assembling drawers! But I do love extra storage space, so I’m pretty darn excited that we’ll be able to store all of the boys extra sheets and blankets in the hidden stair drawers. Especially since I’m now thinking that we might eliminate the small dresser from the room because I’m afraid it’s going to feel to crowded.
So basically we crossed one thing of the list this week. Assemble beds – check. That leaves, well… it leaves everything else. And only two more weeks to get it all done. But we kept the plans for this space pretty simple, so I think we can do it. I’ll be taking a trip to Ikea tomorrow to pick up all of the picture frames and some accessories for the space, and I think I have another online order or two that I need to make. I feel like I should be stressed about where we’re at relative to the deadline, but I’m actually feeling pretty zen about it {for now…}.
Thanks so much for stopping by for this week’s One Room Challenge progress report! Please be sure to hop over the Calling It Home, our fabulous host for this event! On her blog, you’ll find links to all of the weekly updates from the other 200+ participants. So many fun spaces that are starting to come together!