Here’s the story, of a boy named Beckett
Who was playing with his favorite animals
In his room he had lots of books and toys
And argyle on the walls

Here’s the story, of a boy named Cooper
Who loved cars and trucks and roads and traffic cones
They were brothers and best friends forever
Yet at night they’re alone 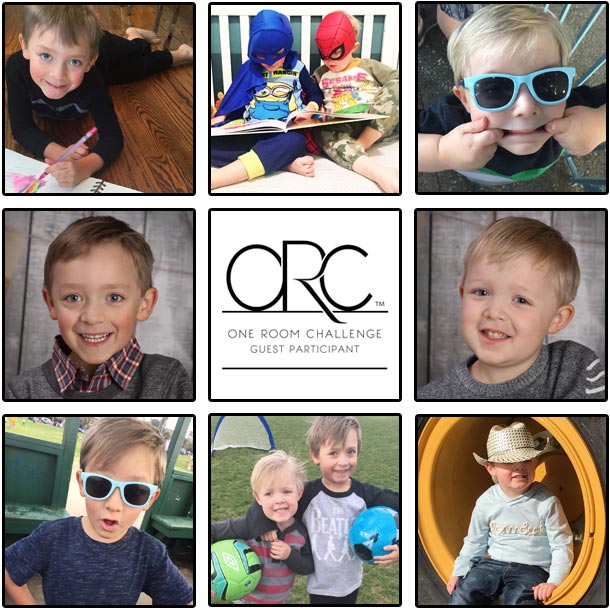 That’s right, it’s One Room Challenge time again, and I’m jumping in for a seventh time. I think that makes me officially crazy! And I’ll be honest… I had planned to sit this round out to save myself the stress and just enjoy the spring with my boys. But this time the room makeover request came directly from my cutie sons – so how could I say no?!
Three years ago, when I was working on my very first One Room Challenge – creating a “big boy room” for then 2.5 year old Beckett – Scott said to me, “You know that in a few years the boys are going to want to share a room, right?” I laughed and said, “No way! Why would they want to share a room when they have rooms of their own?” I’m here today to eat my words!
Turns out that father knows best, because he was spot on and the boys are begging to share a room! Beckett is now 5 and Cooper will be 4 in a couple of months. These two are the best of friends and hate to ever be apart – especially at night. After months of asking for bunk beds, we are finally ready to grant their wish, and over the next five weeks we’ll be converting Cooper’s room into a space for the two to share.
If you are new here, and wondering what the heck the One Room Challenge™ is all about, let me give you the quick overview. It is a twice annual blogging event hosted by Calling It Home in which a hundred or more designers challenge themselves to completely makeover one room in their home in just five weeks time. We each post weekly updates during the process, from the before photos and design plans, through the ups and downs of progress, and leading up to the final reveal of our completed space. You can read more about the ORC, and see all of my past ORC room makeovers here!
Normally this is the week that I’d share my plans for the space, but since both of the boys currently have rooms that I’ve poured my heart into, I wanted to start by showing your their bedrooms as they are now, and talk about what we’ll be changing. Then next week I’ll show you the floor plans and mood board I’ve come up with the new shared space.
When I was pregnant with Beckett, we decided not to find out if I was having a boy or a girl. We decided to decorate the nursery in a “neutral” way, so that it could go either way, and could easily be used for a second child down the road. 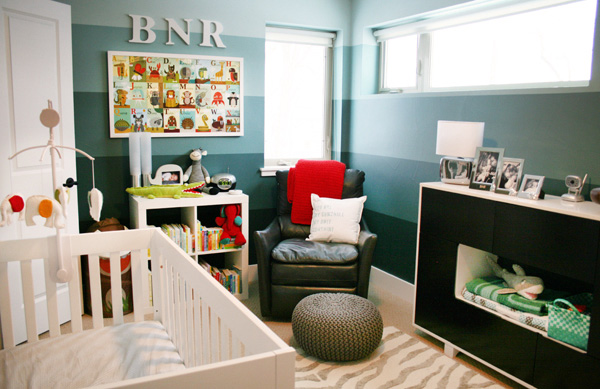 Since we both love blues and greens, Scott and I decided the paint the nursery with ombre stripes in shades of teal – which might not be a color everyone would consider “gender neutral,” but it was perfect for us. {Get the ombre stripe tutorial here} We added mostly white furniture to balance out the color on the walls, and added red, yellow and green as accents in the space. 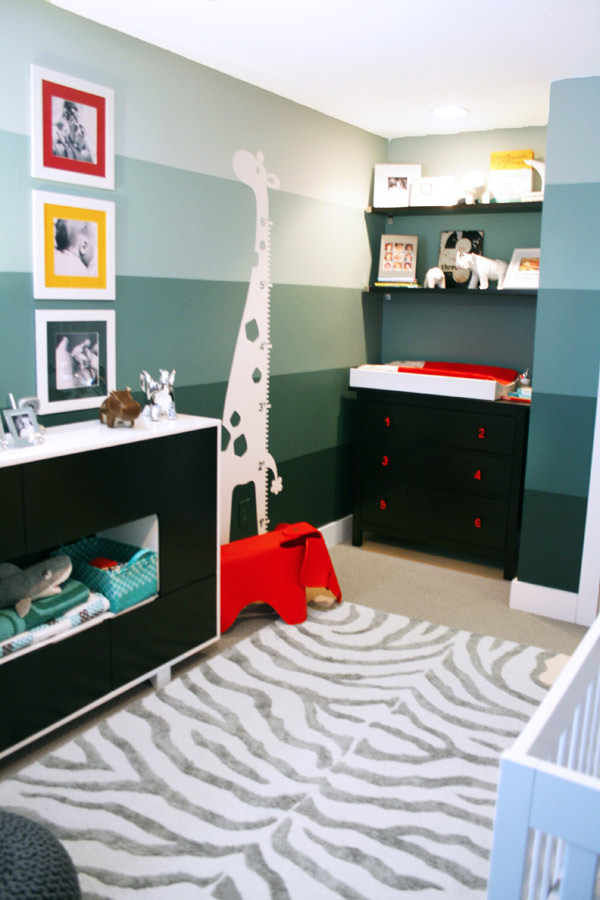 My mom and I collaborated to create the quilt above the crib – I drew the animal silhouettes drew up the quilt design, and she turned it into reality with her mad sewing skills. My mom also made the adorable elephant mobile, which our boys were always mesmerized by! {Read more about the current nursery in this post} 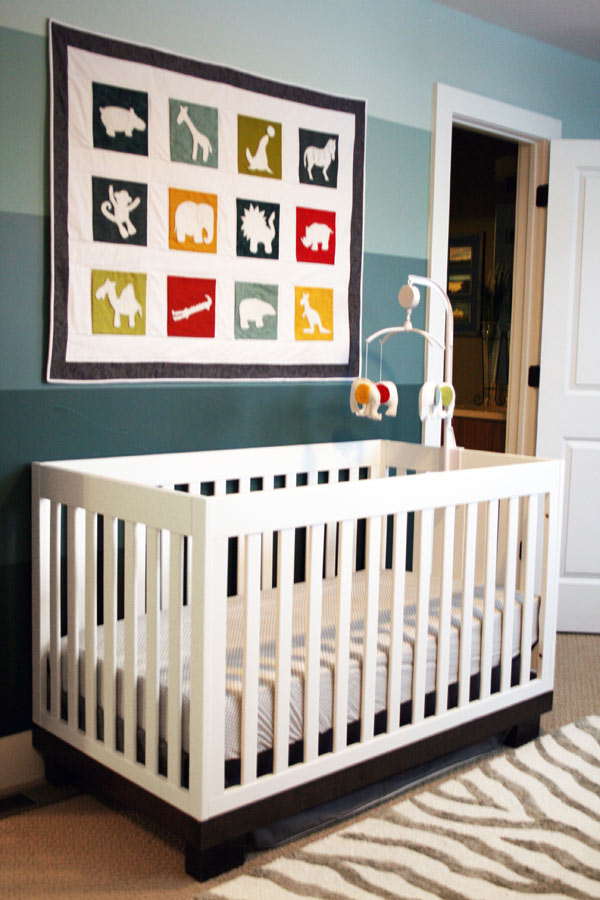 When Cooper came along, he initially slept in a cradle in our master bedroom. Once we were ready to move him into the nursery, we started created a special menswear themed “big boy” room for Beckett. And that was my very first One Room Challenge space back in the spring of 2014. 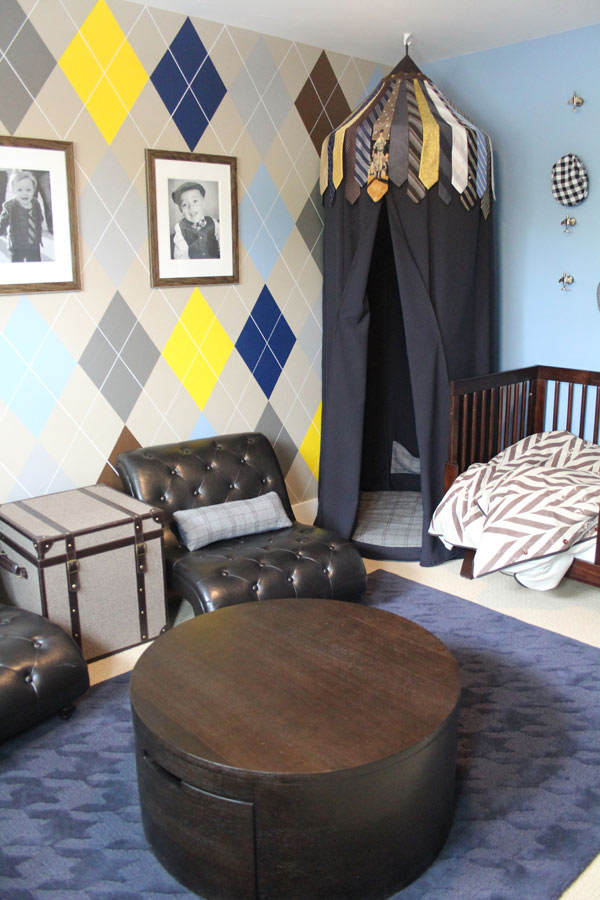 The hand painted argyle wall remains the most intimidating DIY I’ve ever tackled, but I’m thrilled with how it turned out. {Get the argyle wall tutorial here} The play tent in the corner was another project that my mom and I collaborated on, and the neckties around the top were collected from all of the men in the family.
Along the far wall of the room, two long thin bookshelves provide tons of storage for books and toys. The adorable kid-sized tufted chairs provide the perfect reading spot, and the round coffee table has two big drawers for toys and it’s just the right height for play. 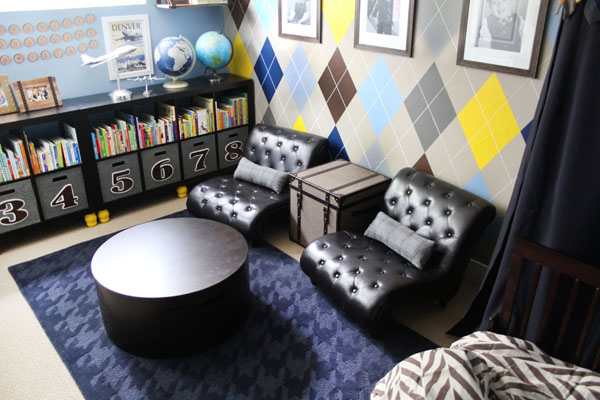 Throughout the room, we incorporated various elements of menswear into the decor, like the belts that we turned into drawer pulls on the dresser. Elsewhere in the room we also used belts to hang shelves from the wall. {Read more about this gentlemanly little room and all the DIYs in the space here} 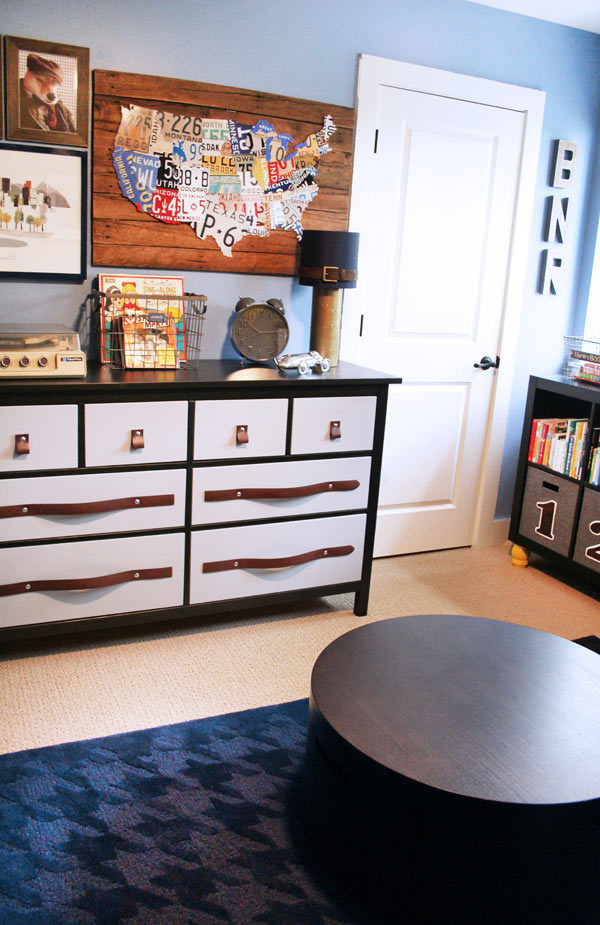 Ok… so that’s what we have now. A teal striped nursery {the crib has since been converted to a toddler bed}, and a menswear inspired “big boy” room. So what do we do now that the boys want to share?
The plan is to rearrange the nursery to add bunk beds and lots more storage. The menswear room is where the boys currently spend most of their time playing together, so we’re going to keep that room just as it is and we’ll call it the playroom. We’ll even keep the toddler bed in the “playroom” for now, just in case the boys need to sleep separately for any reason.
Although the nursery looks much smaller, the two rooms have nearly identical square footage – the nursery is just much longer and thinner. I’ve been playing around with floor plan layouts to make the room work well as a shared space, and I’ve finally come up with something I’m happy with.
Stop back by next week when I’ll show you the full plans for converting the nursery into a shared room, including how we’ll redecorate! We’re keeping the striped walls, and some of the furniture will stay the same, but I think we’ll be able to make it feel like a whole new space for two growing boys.
And, because I’m even more crazy, I’m going to give their small shared bathroom a quick makeover as well. But more about that next week…
In the meantime, head over to Calling it Home to check what everyone else has planned for the One Room Challenge. I took a sneak peek, and there are some amazing plans in the works.
If you are interested, you can also take a look back at all of my past ORC spaces, in case you missed them the first time around: