I hope everyone had a fantastic Valentine’s Day, or simply an enjoyable Saturday if Valentine’s is not your jam! Scott and I were originally going to stay home with our boys, but after finding a last minute babysitter, we left the house with no real plans other than to spend a few kid-free hours together. It ended up being a crazy evening that finally culminated with us having dinner and exchanging gifts around 11 pm. 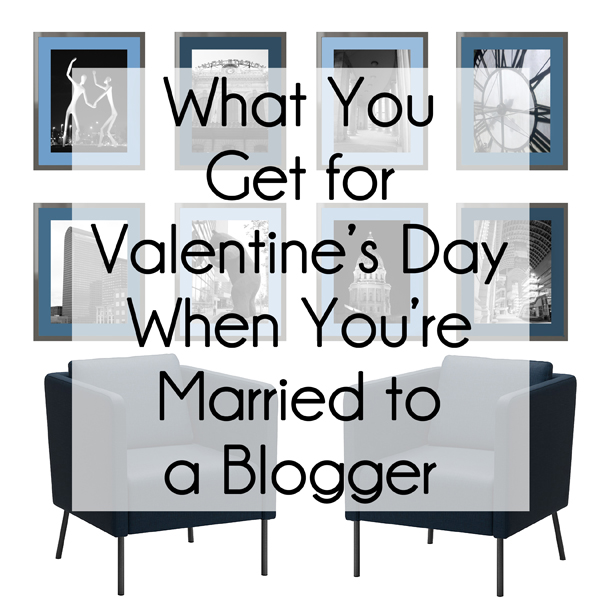 When the babysitter arrived, we left the house with no clear destination. It had been too late to get a dinner reservation, we thought about going to the theater but couldn’t get seats together, and there weren’t any movies showing that sounded that good to us. Instead, we started driving aimlessly while discussing what we should do.

For a while now, Scott’s been talking about the possibility of trading his car in for something more like mine – he just hasn’t been that happy with his car and wants something that’s a better fit for our family. With nothing else to do, we decided we might as well go an test drive one of the cars he was interested in, just to see if he liked it. After a quick test drive, we planned to go find somewhere to eat dinner.

Instead, nearly five hours and a lot of negotiation later, we ended up leaving the dealership with a new {to us} vehicle that is much nicer than our trade-in but with a lower monthly payment. #Winning!
Here we are spending our Valentine’s evening with John Elway, or at least his cardboard likeness at his dealership… 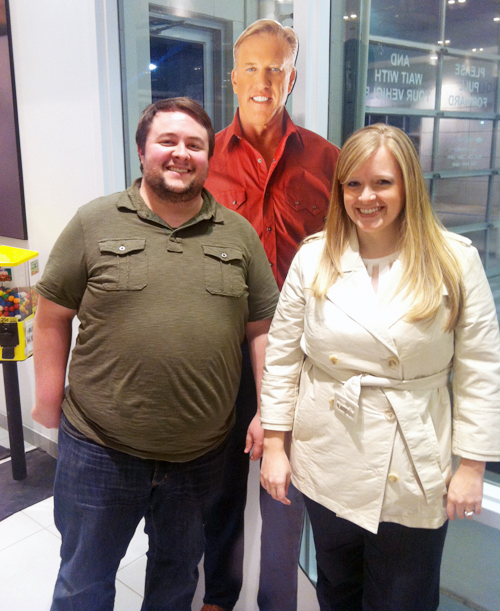 There’s something to be said for going to a car dealership late on a holiday…it’s amazing what they’ll offer to stop you from walking out the door when you are the only customer. So there’s your car buying tip for the day, but that really isn’t what this post is about! 🙂

Finally, at about 10:30, we left the dealership – in two cars, rather than one – in search of a late night dinner. Mexican food and margaritas are always good choice! And, although a new car seems like a pretty good Valentine’s present, we still had other gifts to exchange.

Scott got me a gorgeous color wheel necklace from ModCloth, which you may have already seen if you are following me on Instagram or Facebook. 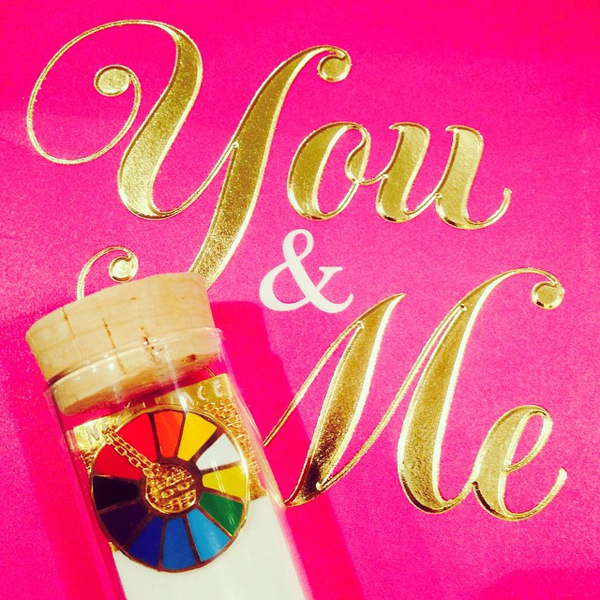 Ok, so now we are getting to the actually point of this post…about time, right?!

Scott’s gift was something you probably only receive for Valentine’s Day if you are married to a blogger or an interior designer… a mood board!

Last summer, Scott started a new job {if you are interested, you can read this post about why his new job makes him Super Dad} and ever since, he’s been telling me that he’d like me to decorate his office. Every time I ask for his input, he says he just wants me to design it and show him the plans. So for Valentine’s Day that’s just what I did… I created a Photoshop rendering of my plans for the wall across from his desk, as well as a few ideas for the rest of the space. 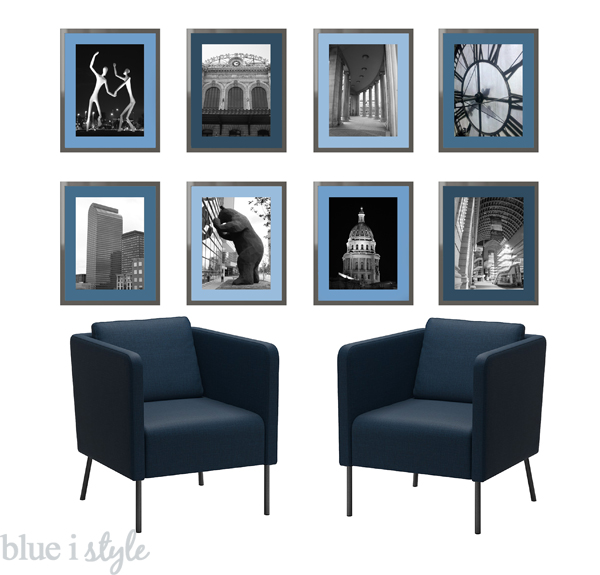 Scott’s favorite color is blue, and he loves Denver – so those two things will come together to create a gallery wall for his office with black and white photos of the city, each paired with a different shade of blue mat. Best of all, these are all Denver photos that we’ve taken ourselves, adding a personal element.

I’ve been in his office many times, but when I sat down to draw up my plans, I was having trouble visualizing all of the available wall space. So I called Scott on Thursday to let him know that he’d have a cute visitor after lunch. While Beckett kept him occupied, I covertly snapped some photos of his office. 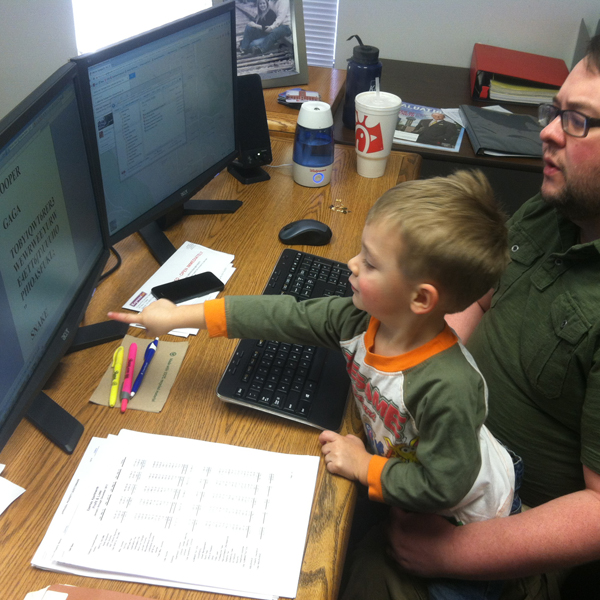 Here’s the wall across from his desk as it is now – and as I envision it. 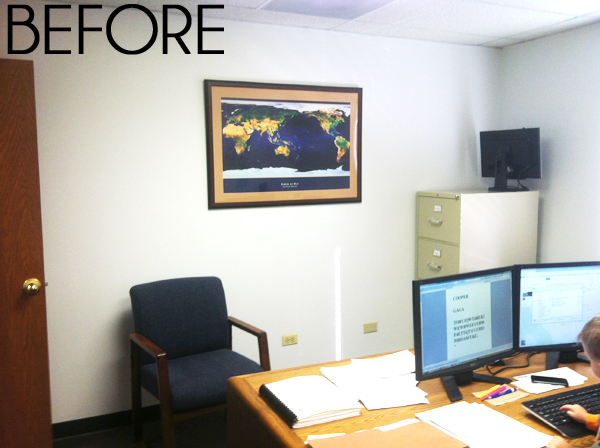 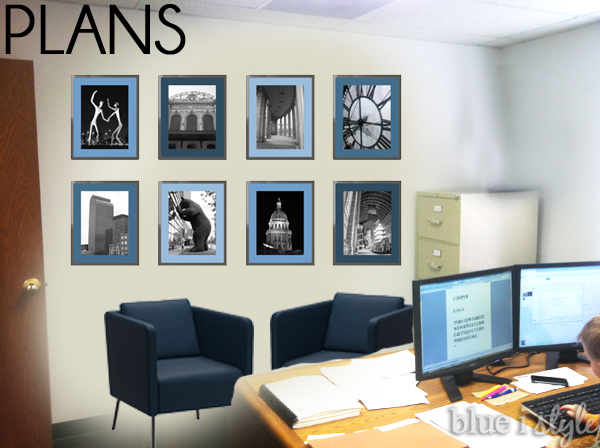 He also needs some comfy and stylish chairs for co-works to sit in when working in his office, so we’ll get him two new chairs to replace the one he has now. I am thinking these sleek blue Ekero chairs from Ikea might be perfect. I’d also like to update that file cabinet in the corner, but I’m not sure yet whether I’ll be able to {since it doesn’t belong to him}. Either way, we’ll make it look nicer by adding something decorative on top and I may also do a painting to hang above it on the wall to the right.

The wall behind is desk is filled by two giant maps that need to stay… but I’m hoping to find a way to frame each out in blue without spending a fortune. I’m not sure exactly how I’ll do it yet, but it might entail painting two large pieces of unstretched canvas. 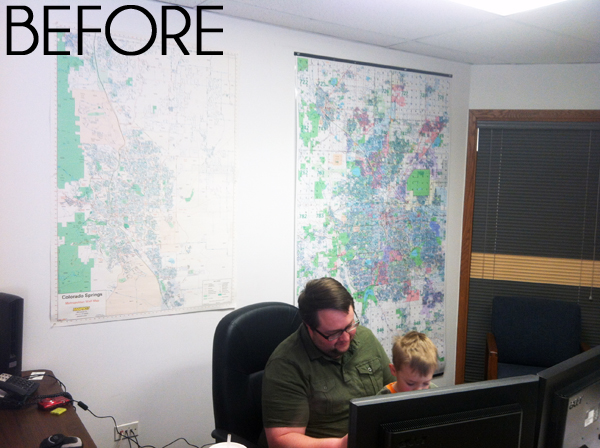 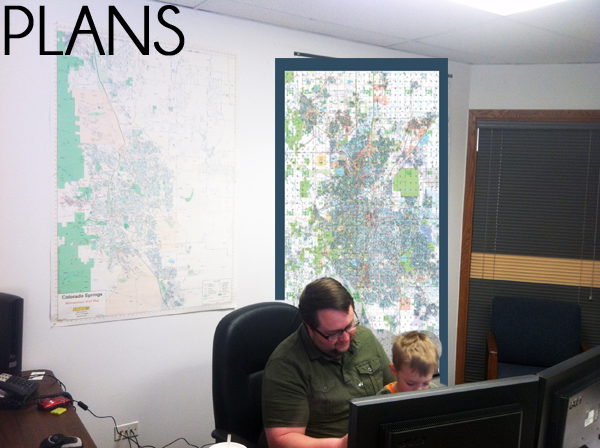 Next to the desk is another blank wall that will be perfect for displaying his undergrad and MBA diplomas, as well as a few family photos. 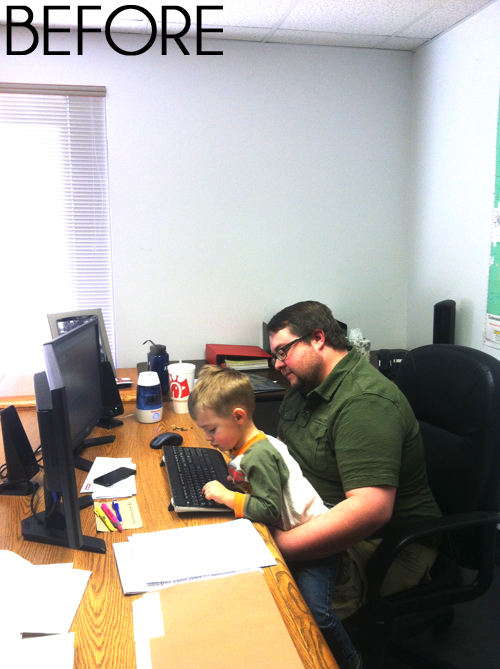 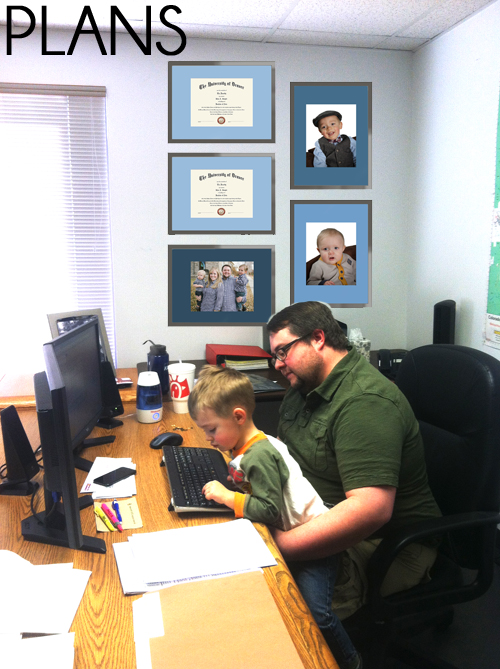 Lastly, there is a bookshelf on another small wall, which currently holds a number of framed photos. The bookshelf and the photos will stay, but we’ll make it all look a bit nicer by moving the photos and books around for better balance. 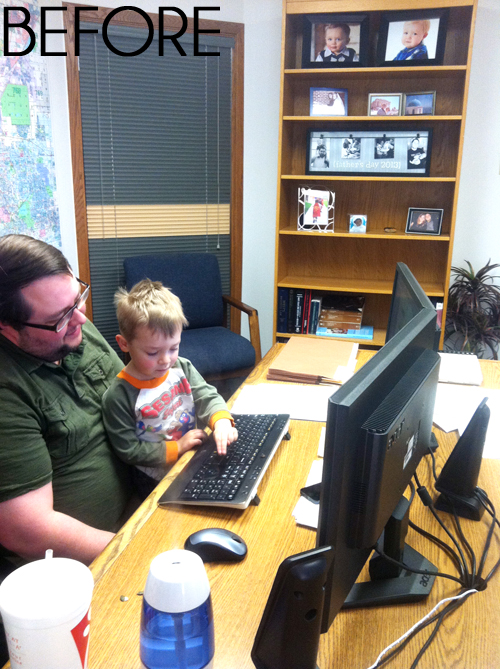 We have some lamps from our prior home that we’ll bring in to Scott’s office, and I’ll get him some new office organization supplies to pull it all together. Long term plans may include replacing the desk and bookshelf with something more his style, but that’s not in the budget for this quick refresh.

So what do you think of my plans for Scott’s office? Did any one else give their spouse design plans for Valentine’s Day?!