I know probably every parent feels like the first year flies by, but I really can’t believe that Cooper is one. ONE!

It seems like just yesterday that I was announcing his birth here on the blog, and showing you precious photos of Beckett meeting his new little brother for the very first time {those photos still bring tears to my eyes!}.

A couple of weekends ago we invited all of our family, and our friends with kids near Cooper’s age, to help us celebrate this milestone birthday with a Mustache Bash! 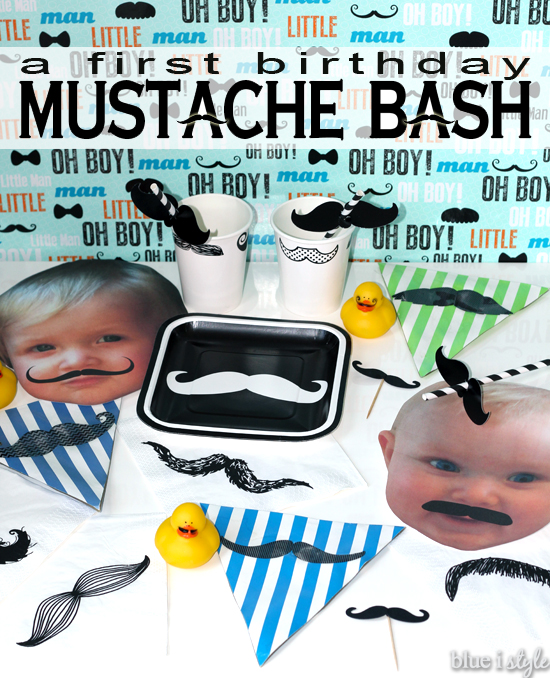 At Beckett’s One Year in a Flash first birthday party, the invitations featured monthly photos of his cute little face with party hats Photoshopped in. It was a huge hit, so I wanted to do something similar for Cooper. Finally I came up with the perfect idea… add mustaches to each of Cooper’s monthly photos! And that’s where the inspiration for the Mustache Bash came from. 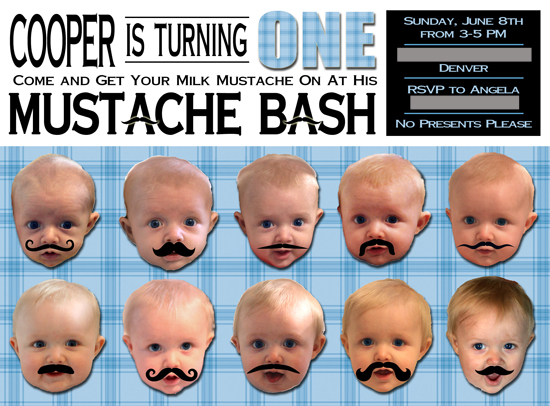 Because of the timing of mailing the invitations, the invitation only featured photos of Cooper at months one through ten, but for the party I made a banner with all twelve monthly photos adorned with twelve different mustaches! {Click here to see the similar party hat banner we made for Beckett’s first bithday, with DIY instructions.}

Since the party was in early June, we thought it would be perfect to host in the backyard with some fun outdoor activities for the kids.  We set up two long tables along our back fence for all of the food and drinks. 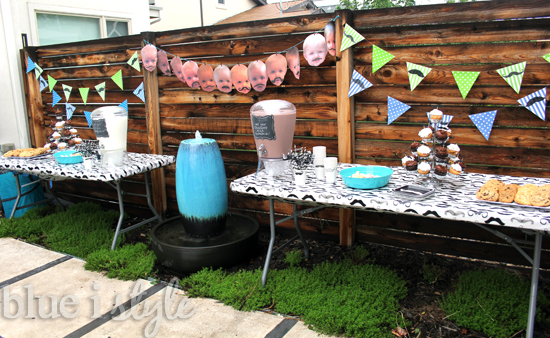 For additional decorations along the fence, I reused the same cute striped and polka dotted pennant banners that we bought for Beckett’s first birthday a year and a half ago, but I added some giant mustache stickers to every other pennant. 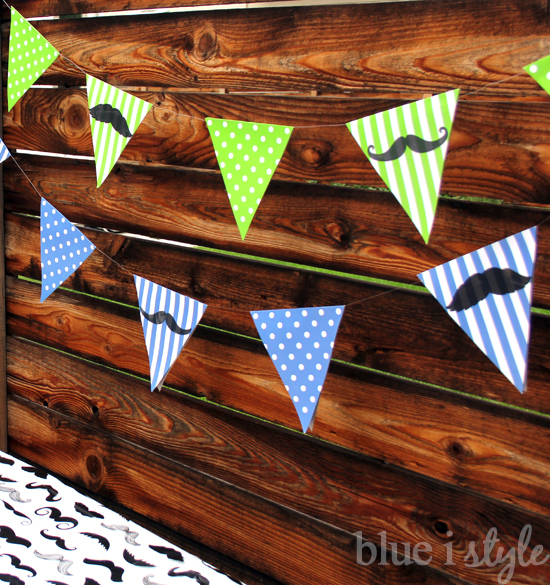 We had invited everyone to “get their milk mustache on” at Cooper’s party, so we filled our two large beverage dispensers with milk and chocolate milk, and I added cute chalkboard labels to each. 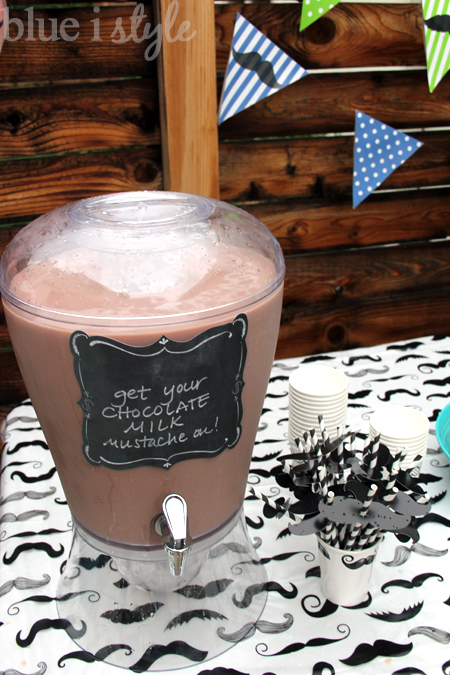 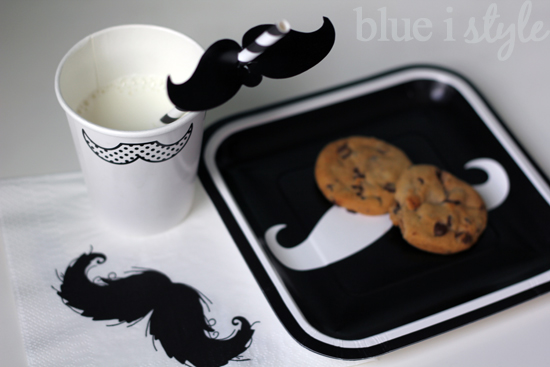 Since the party was in the mid-afternoon, we decided to keep the food simple and kid friendly, with cookies, cupcakes and apple slices. 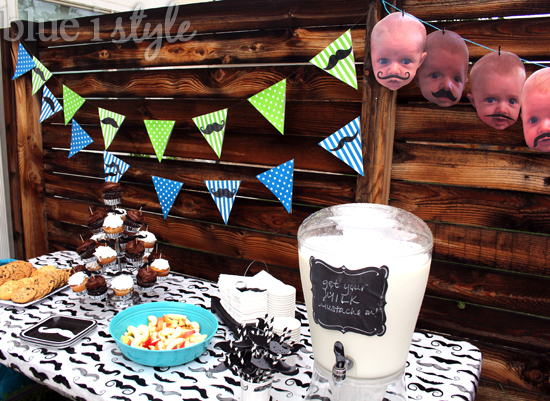 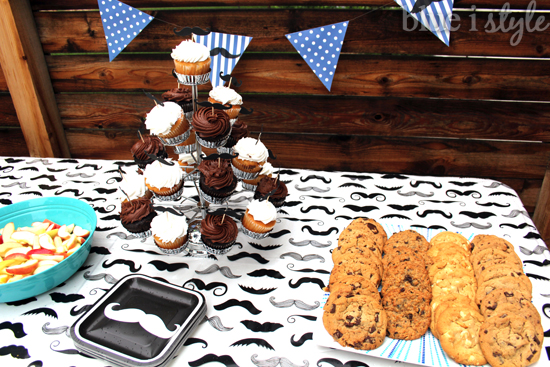 We filled our beverage cooler full of bottles of water made fancier by the addition of mustache wrappers {click here for the details of these DIY water-proof bottle wrappers}.

Elsewhere in the backyard, I strung up my chalkboard pennant banner and used a chalk bistro marker to make it read “Happy 1st Birthday Cooper.” 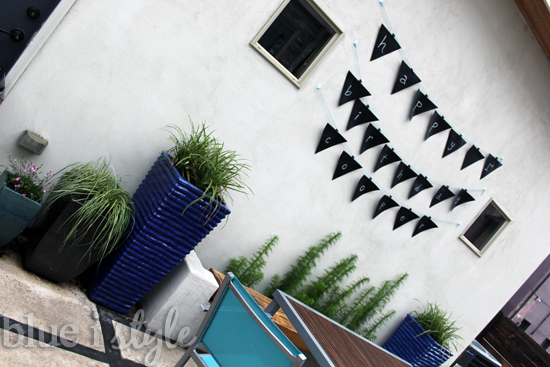 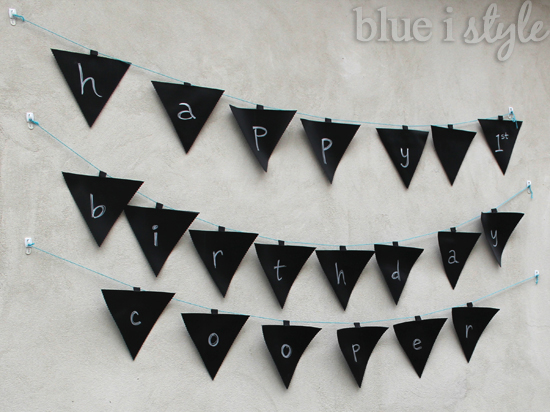 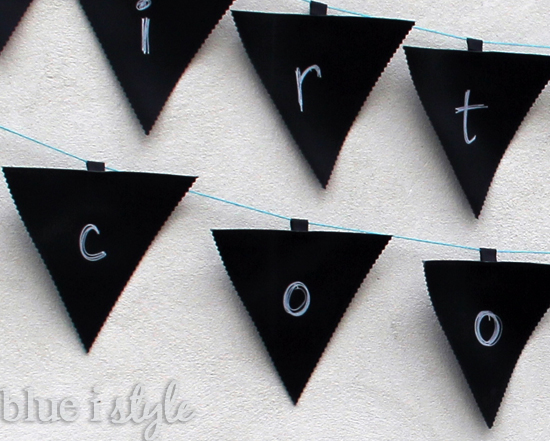 Now, you may have noticed in these photos that things seem a bit wet… well that’s where this story takes a sad turn. If you’ve been following this blog for a while, then you know we haven’t had the best birthday party luck this year. We had to turn all the guests away at Beckett’s second birthday party back in January because an employee forgot to show up for our rec center rental, and we were locked out. {You can read that sob story here, as well as the details of the successful second attempt at his Sesame Street themed party here.}
During the week leading up to Cooper’s Mustache Bash, the weather forecast showing blue skies and sunshine for the day of the party. But shortly before party time, the skies turned gray and it started to sprinkle. The decorations were up, so we hoped to stick it out and that the storm would pass. But instead it got worse … rain, hail, even a tornado warning! Seriously?! 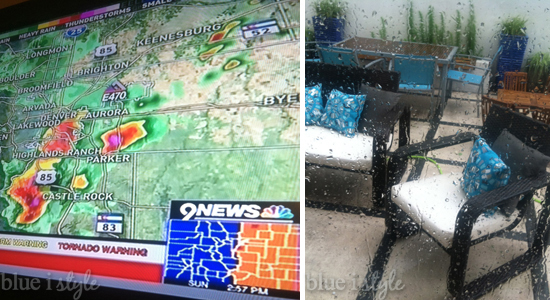 I quickly took some photos of the outdoor set up, and then we rushed to move the party indoors. We got the food into the kitchen before it got too soggy, and I hurried to rehang the damp mustache face banner just as the guests were arriving. 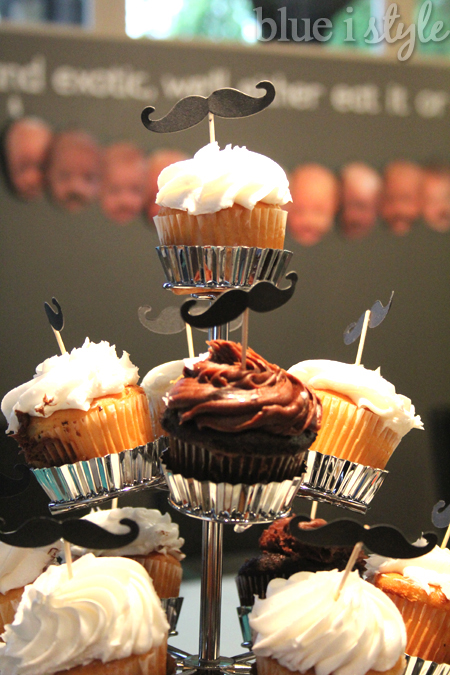 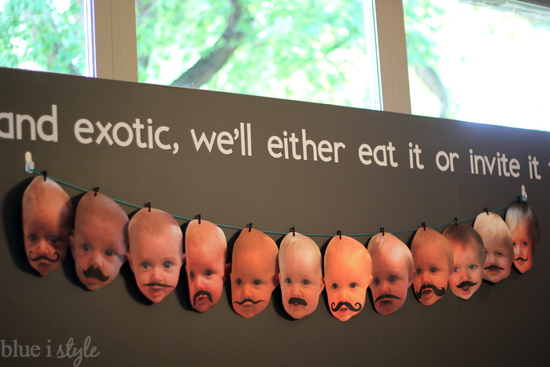 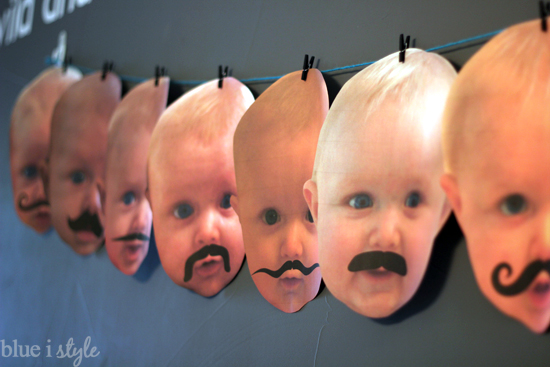 Sadly, most of the other decorations could not be salvaged.

But we weren’t going to let a little a lot of rain get us down. Since the outside activities were washed out, we instead invited all of the kids to have a ball in our basement play area.
We still had the DIY Sesame Street bean bag toss game that I made for Beckett’s second birthday party, so I quickly added two mustache stickers to Elmo and Cookie Monster for even more indoor fun. That’s my kind of recycling! 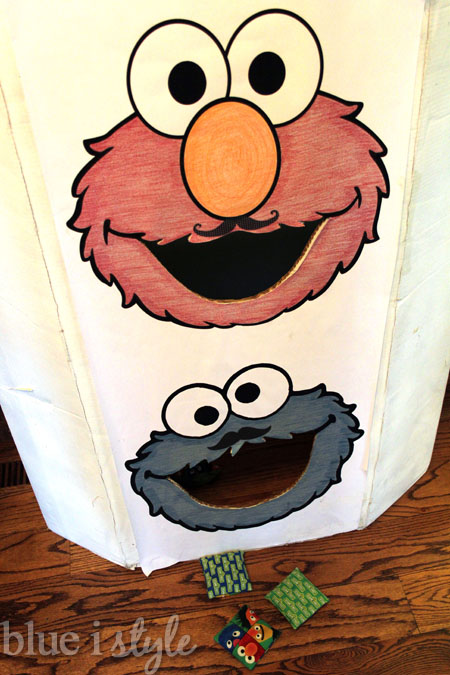 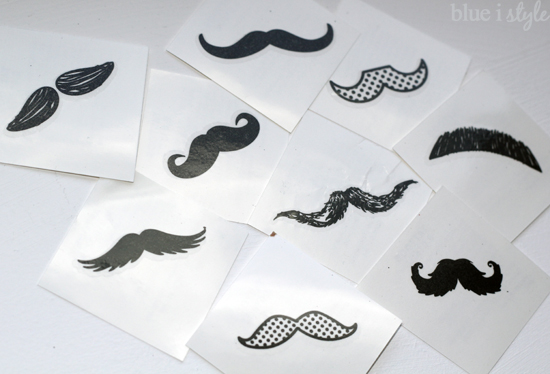 My hubby was a great sport and modeled a finger-stache to get the kids excited!
The kids lined up and I used a damp sponge to apply tattoos to their hands or fingers, and in some cases, even to their faces {parent approved, of course!}. 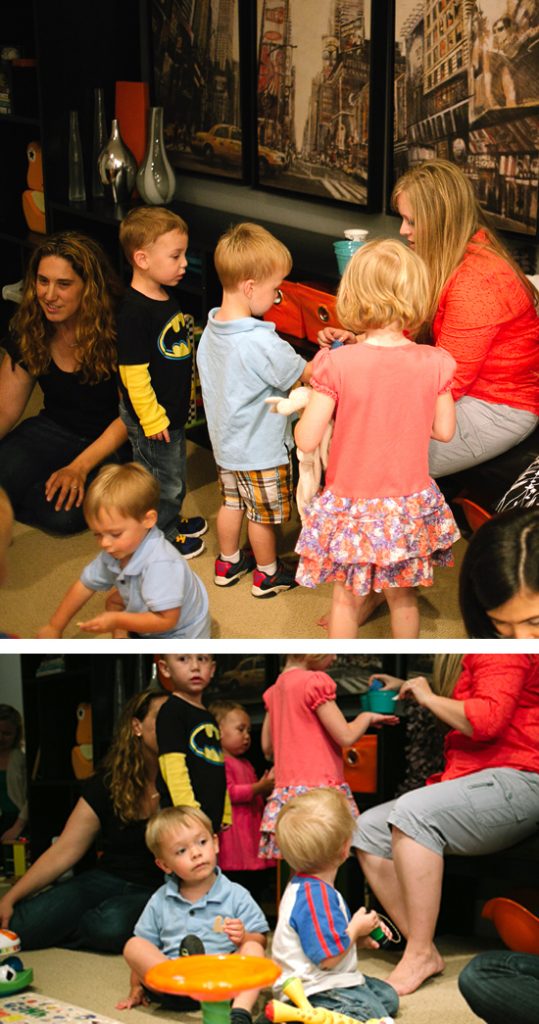 We tried to give Cooper a mustache tattoo on his upper lip as well. It ended up a little too low…
…but it still made for an adorable family photo!
Finally it was time for the moment Cooper had been waiting for…
Bring on the smash cake!
Pretty soon the whole family got in on the smash cake action!

Cooper may only be one, but he is already learning how to share!

By the time he was done, the cake was sufficiently SMASHED and we had one very happy birthday boy!

Despite the rain, everyone had a great time, and the party was a success! We even sent all the kids home with their very own mustached rubber duckies. Aren’t they so adorable?! 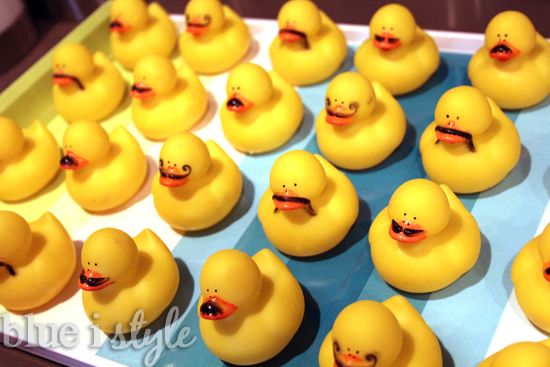