I love having two boys and I really enjoy planning mustache bashes and creating train cakes for them! But, as you might suspect, there isn’t a whole lot of pink and ruffly happening at our house. And that’s why, when my sister asked if I could find a way to make cupcakes into ballerinas, I jumped this girly challenge! 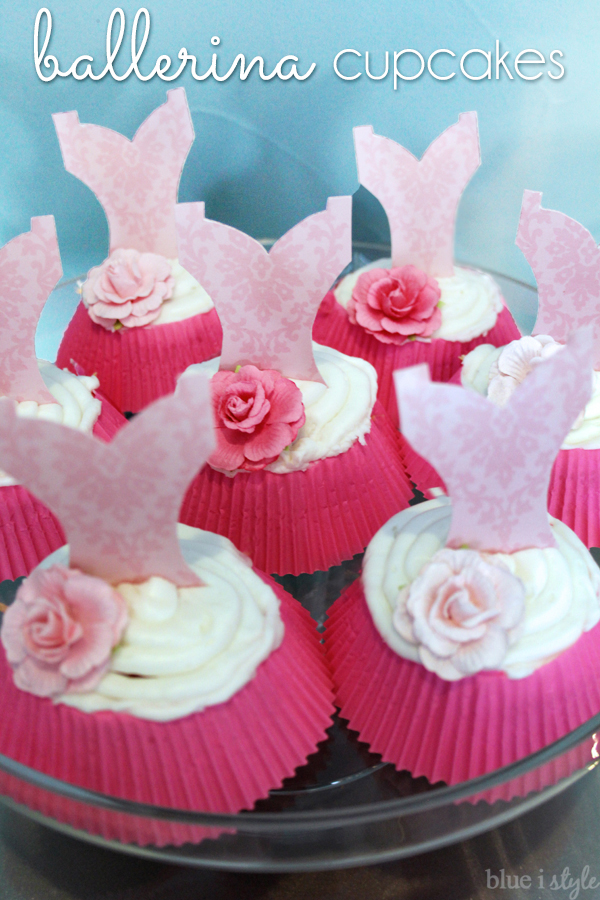 As soon as I heard ballerina cupcakes, I immediately envisioned turning an upside down cupcake liner into a tutu – but how to make that work was another issue. At the end of the day, it was actually very easy, although I think I would do a couple of steps in reverse order if I made the ballerina cupcakes again. Fortunately, you get to learn from my mistakes!
I’ll walk you through my simple process, and I’ll point out what I would do different next time.
Let’s start with the supplies: 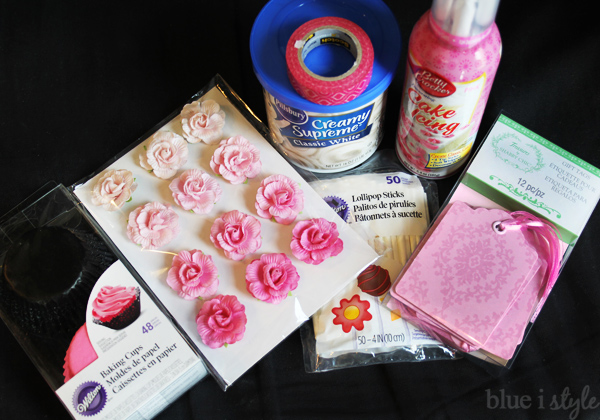 Begin by baking your cupcakes and allowing them to cool on a cooling rack. Once cool, I proceeded to frost them – although if I made them again, I wouldn’t frost them until after I had added the tutus! 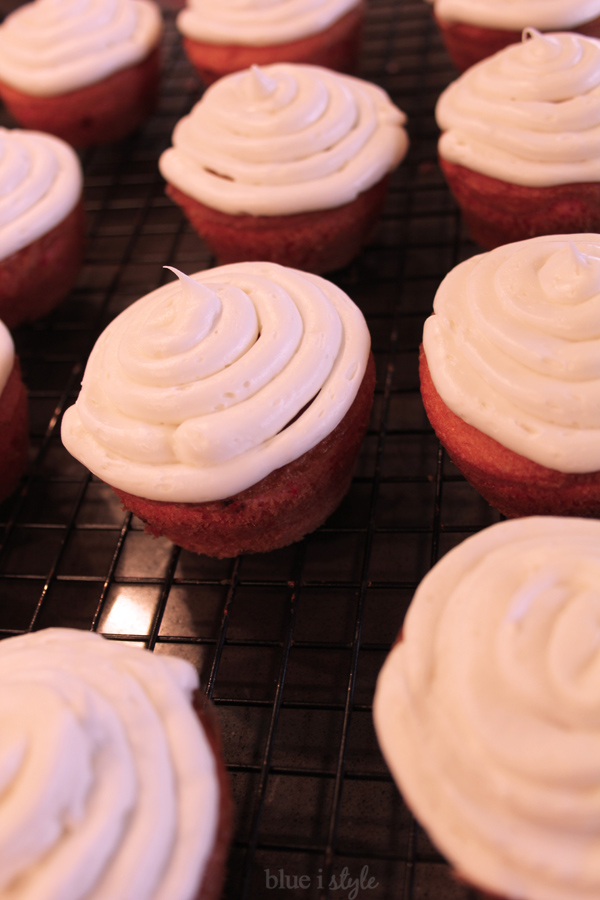 While the cupcakes were in the oven baking, I sketched out a leotard on the back of one of the cute pink gift tags. I erased and redrew it numerous times until I was happy with the shape. 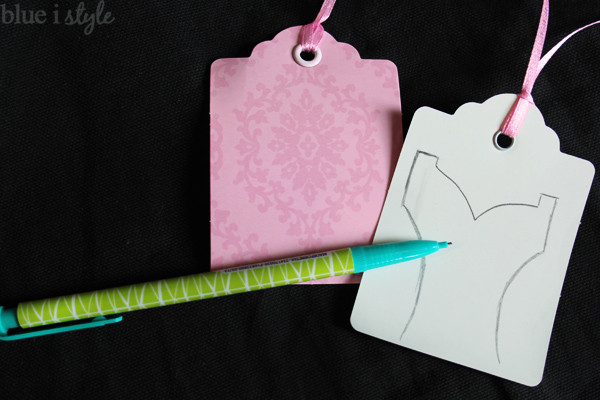 Once I got the shape about right, I cut the leotard out of the gift tag, and then used it as a template to trace and cut one for each cupcake. 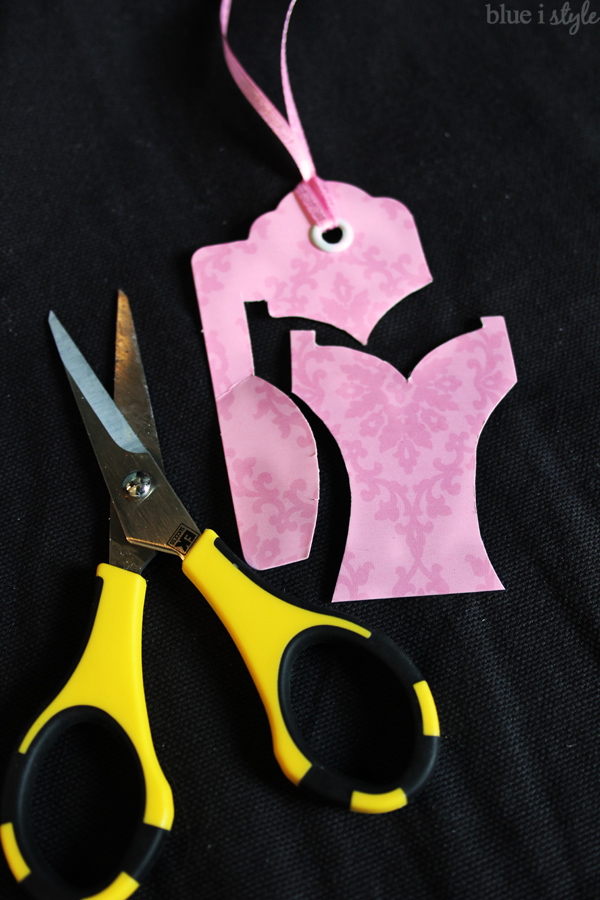 After cutting out all of the leotard shapes, I attached a lollipop stick to the back of each with a short piece of washi tape. I then used scissors to cut down the length of the lollipop sticks so that each only protruded about 1 inch below the bottom of the leotard. 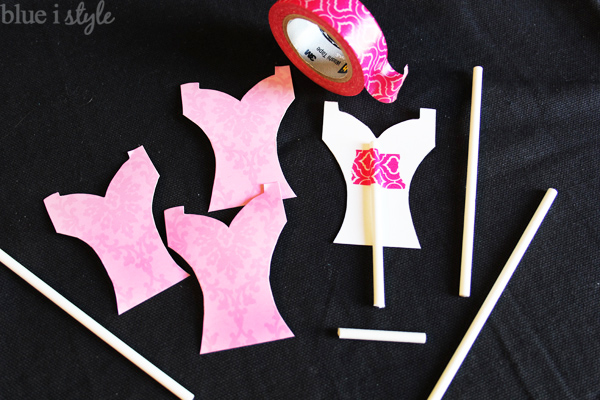 As the cupcakes continued to bake, I prepared the tutus. I simply cut a slit down one side of each cupcake liner and then cut off the round bottom, leaving me with a long, ruffly strip. You’ll need two cupcake liner strips per cupcake. 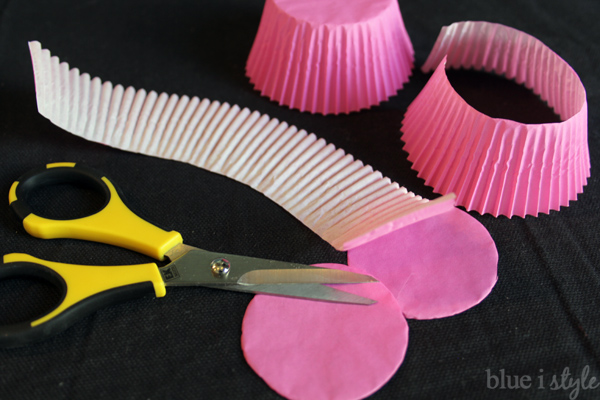 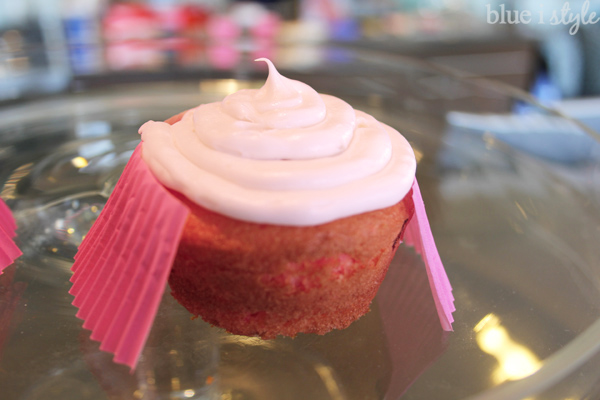 To attach the tutus, turn each cupcake liner strip upside – by which I mean that the edge where you cut off the round bottom will be wrapped around the top of the cupcake. As you can see in the photo above, because the cupcakes are bigger at the top than at the bottom, one upside down cupcake liner won’t wrap all the way around, so you’ll need to overlap two ruffly cupcake liner strips to create the appearance of one complete tutu. 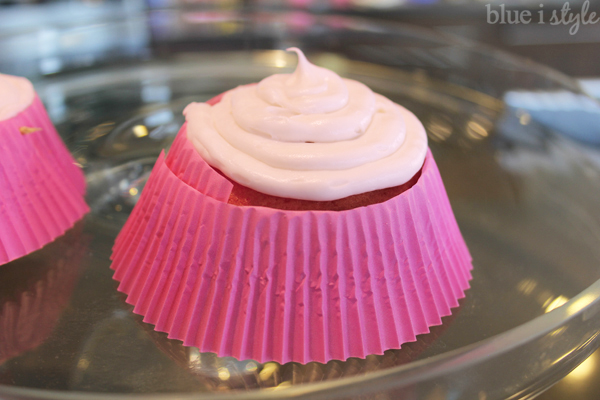 After overlapping two cupcake liners, I then used toothpicks to hold the tutus in place. For each cupcake, I snapped one toothpick in half and used each pointy end to puncture through the two layers of tutu and into the cupcake. Did this in two places on opposite sides of the cupcakes, leaving just a small bit visibly sticking out so that they are easy to see and remove before eating. {If you are serving these to kids, be sure to remove the toothpicks for them!} 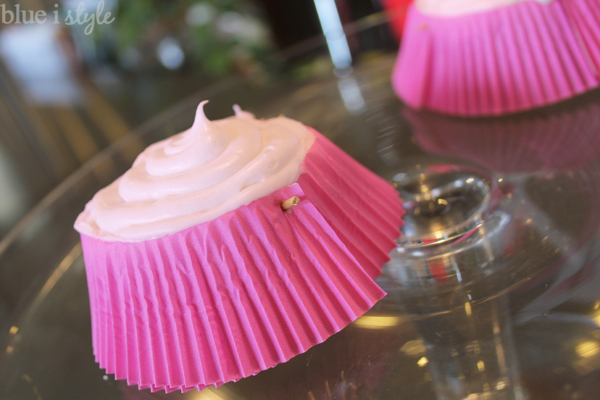 I was impressed by how tutu-like those upside down cupcake liners really looked, and I was now ready to finish assembling my ballerinas. This simply meant placing a leotard in the top of each cupcake and adding a flower. 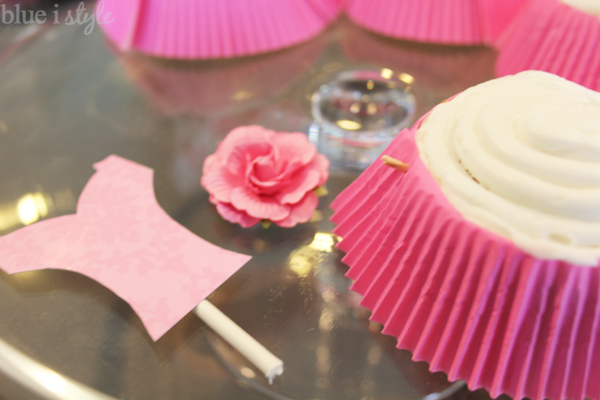 In order to leave room for the flowers, I placed the leotards toward the back of the cupcakes, rather than right in the center. I then sat a flower in front of each leotard, positioned to one side, as if it were sitting on the ballerina’s hip. 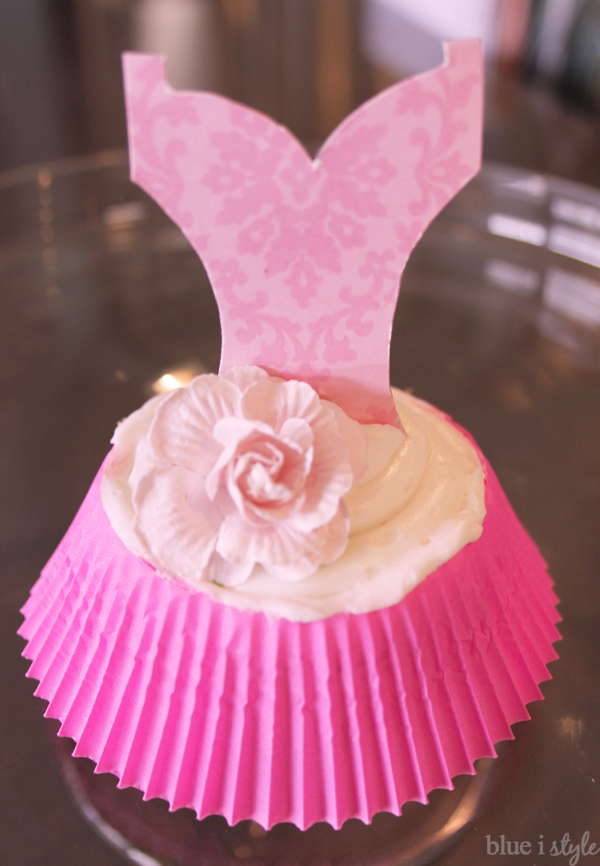 I stood back to see how it looked, and was thrilled to see that my simple plan for creating ballerina cupcakes was actually working! After assembling the remaining cupcakes, I had a whole ballet class worth of pretty, pink ballerinas! 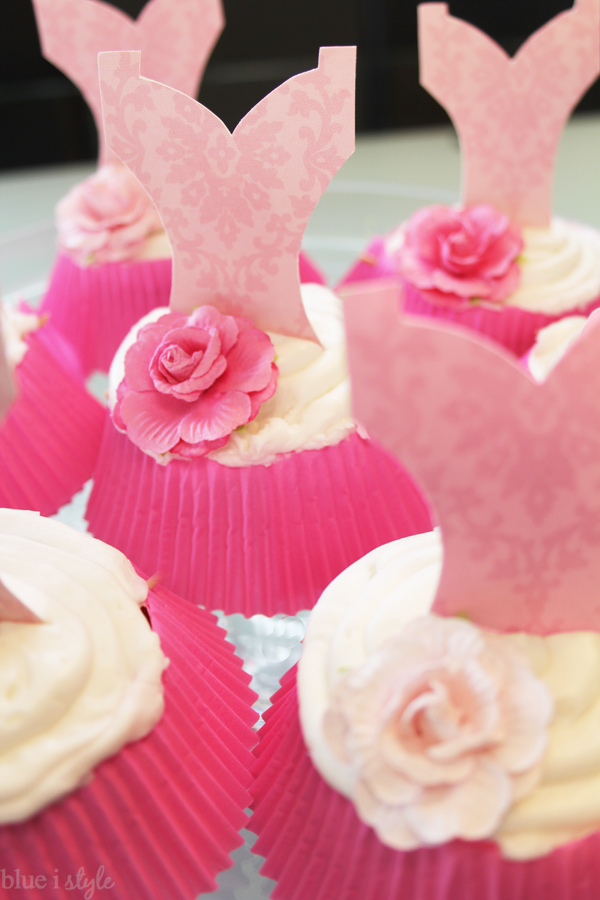 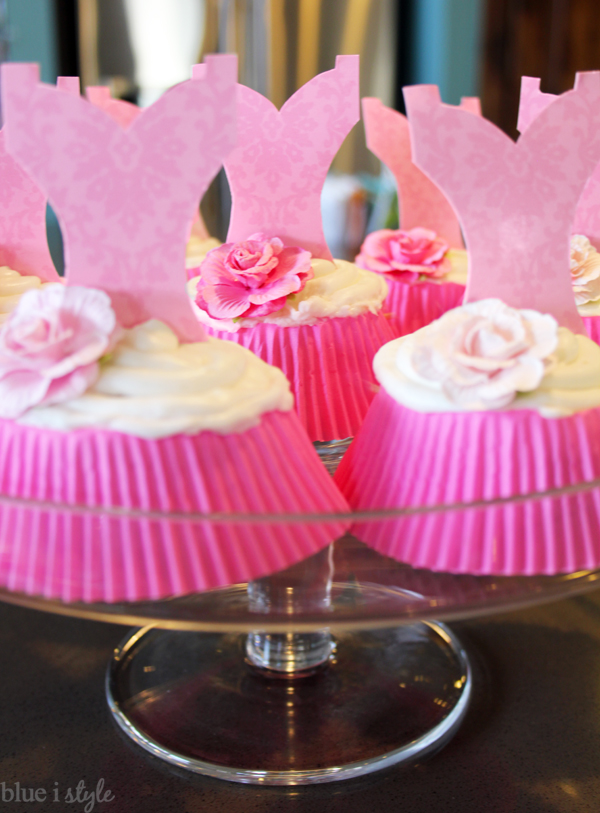 These were so fun to create, and were really super quick to put together! I was able to make a dozen ballerina cupcakes in just about an hour, including baking time. 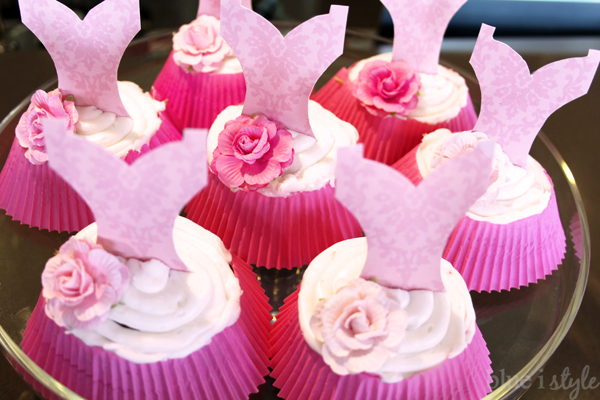 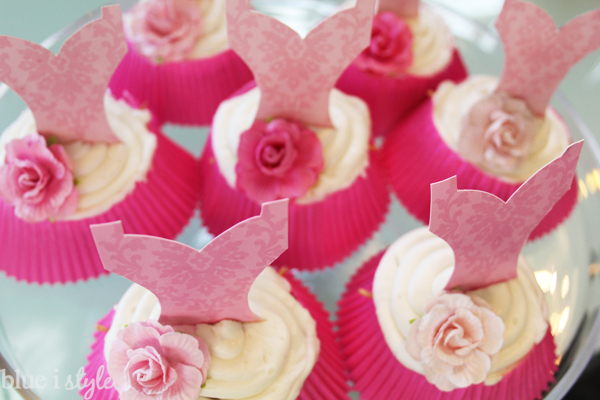 If you have a little ballerina in your life, be sure to pin the image below so that you’ll be able to quickly pull up these simple instructions the next time a birthday rolls around. Or, why wait for a birthday? Any day is a good day for cupcakes in my opinion! 🙂