It’s honeymoon week on the blog!  Six years ago this week Scott and I were basking in the sun of the Greek Isles on our honeymoon.  On Tuesday I shared some of our photos from the islands of Mykonos and Santorini, and I told you all about the amazing Mykonos Grace Hotel.  Today I’m really excited to show you our guest room, and to give you the details on how our honeymoon, and that hotel in specific, inspired the design of the room.

If you took a look at the photos of Mykonos Grace Hotel in my last post, then the first thing you probably notice about our guest room is that it’s not quite as white on white as the hotel’s décor, which featured white walls in addition to white bedding and nearly all white furniture. 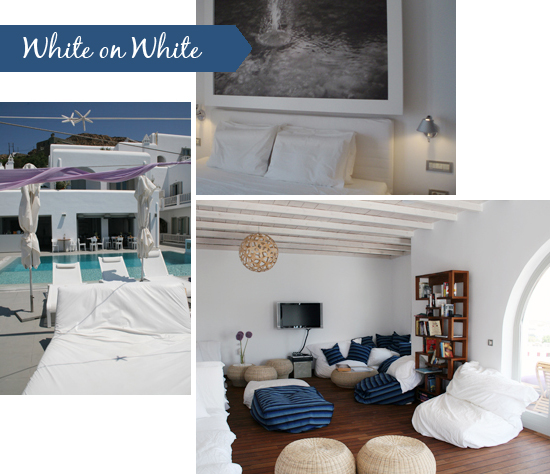 I loved the pure white look that dominated Mykonos Grace Hotel, especially because it is so reminiscent of the all white architecture found on the islands of Greece.  But part of what makes the white architecture of Greece so striking is the way it contrasts against the dark cliffs and the always blue sky.  That’s why, for our wall color, we drew inspiration from the bathroom of our Mykonos Grace hotel room, where the grey provided a stark contrast against the white fixtures and bamboo shelving. 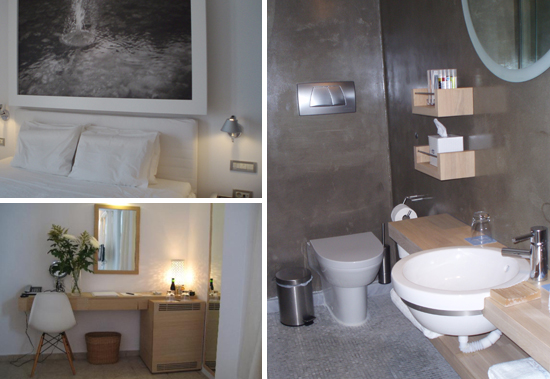 So while we stuck with white on white for the guest room’s furniture and bedding, we selected a deep, dark charcoal grey on the walls, which provides the perfect contrast and gives the room a cozy feel! 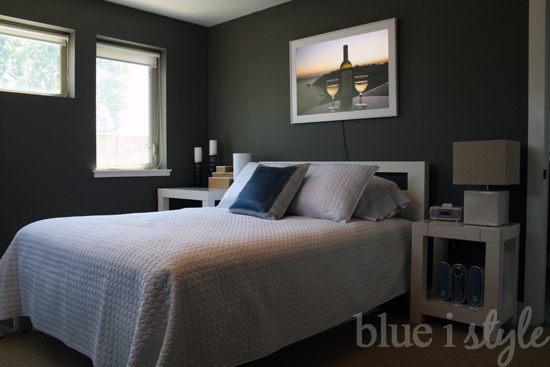 Before I go into the details of the room, let’s start with the function.  I love having guests visit and getting to spend time enjoying their company, but the reality is that often times we have house guests who are traveling for work and need to split their time between business and pleasure.  With that in mind, it was important for us to provide guests with a work space, so rather than two matching nightstands, I opted for small desk on one side of the bed.

The West Elm parsons collection provided the perfect option for the nightstand and desk combination.  I selected the parsons end table for the nightstand on the right side of the bed, and the parsons mini desk for the left side of the bed.  I like that they both have the same simple, straight lines, so I chose a stool rather than a chair as desk seating in order to maintain the visual consistency of the desk and nightstand. 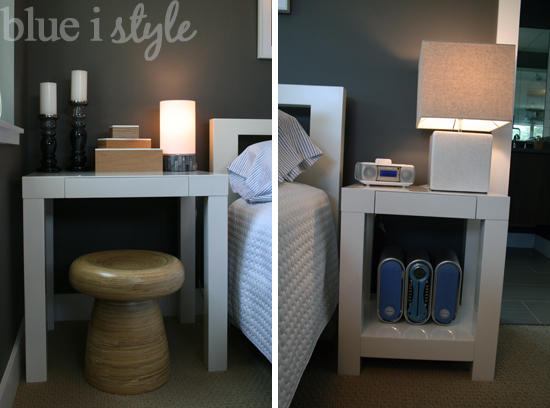 On the opposite side of the room, across from the bed, is a white console with a television.  I selected the long, low white console rather than a more standard dresser because it mimicked the lines of the long, horizontal window on the wall above.  The low profile of the console also allowed me to place the television on top without having the top of the television overlap the window.

Positioned between the bedroom door and the closet door is a white butler tray on a bamboo stand, also from West Elm. 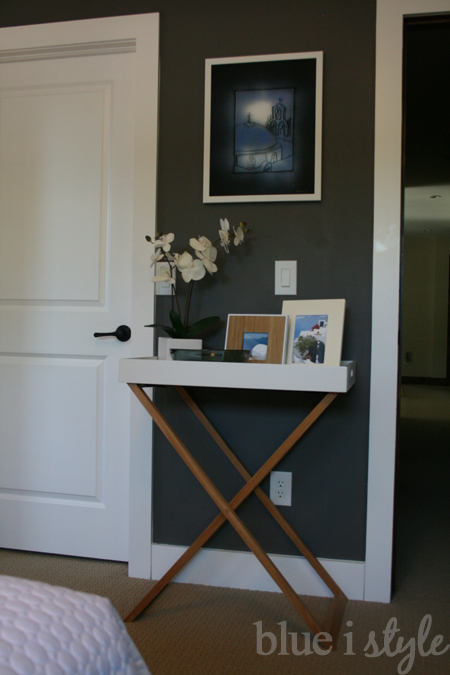 The tray provides an extra space for guest belongings, and the glass bowl often serves as a drop-spot for wallets and keys. 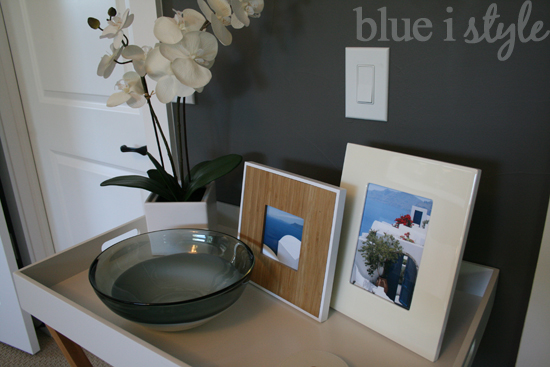 Hanging above the butler tray is one of the items in the room that is most special to Scott and I – the piece of art that we bought in Santorini on the final day of our honeymoon which we placed in a simple, white frame. 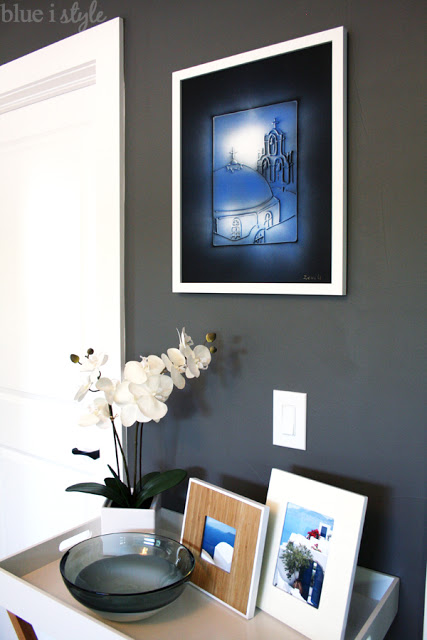 The texture of the art is so unique, and the bright blue color so perfectly reflects the most predominate color of the Greek Isles – the blue of the sky, the sea, the doors and shutters, and the church domes. 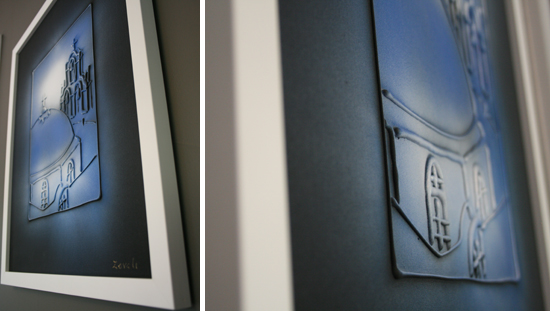 As a wedding gift, Scott gave me a digital SLR camera in hopes that it would allow us to capture some amazing pictures while on our honeymoon.  And his plan worked!  We came back from Greece with many postcard-worthy photos that demanded to be framed. 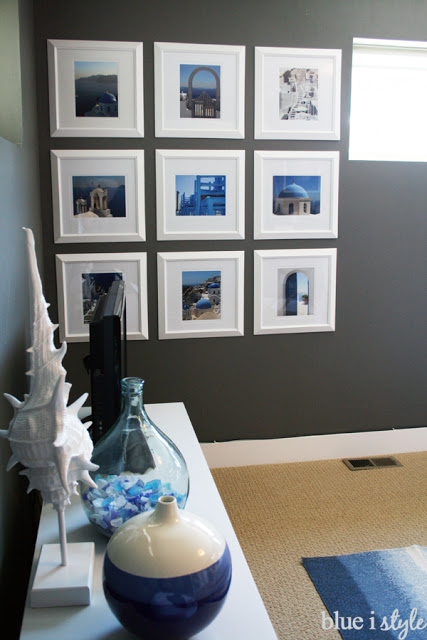 Some of the photos I wanted to frame were portrait in orientation and others were landscape, but I wanted the gallery to have a very linear and symmetrical feel, so I selected square frames and mats with 8×10 openings that could be rotated accommodate both the portrait and landscape photos.  I picked white frames as well as white mats in order to stay true to the Mykonos Grace inspired white-on-white theme. 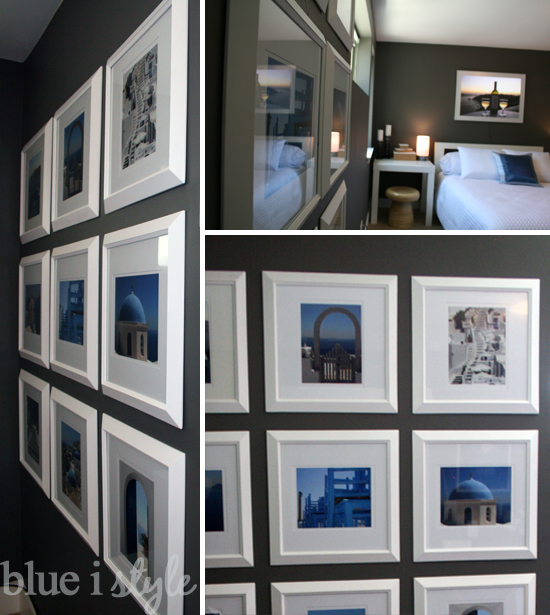 In addition to providing the overall color palette for the guest room, a lot of the details of the room were also directly inspired by Mykonos Grace Hotel.
The library of the hotel was filled with massive white bean bag-style seating and overstuffed blue pillows.  Bean bag chairs certainly aren’t a standard form of seating for a hotel, but they created such a cozy feel that called out for you to kick back and make yourself comfortable.  We added a white bean bag chair and a blue pillow to our guest room to create the same inviting feel. 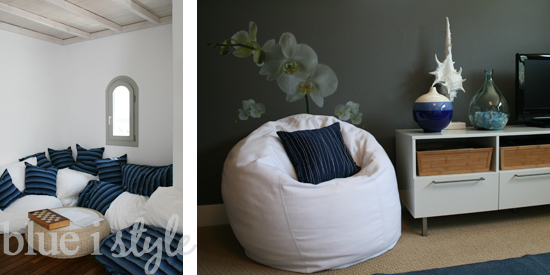 Mykonos Grace Hotel was filled with orchids throughout.  I love orchids – in fact my entire wedding bouquet was nothing but white orchids – so when I found a very large wall sticker of orchids at Aaron Brothers frame store I knew it had to find a home somewhere in the guest room.  Popping up from behind the bean bag chair turned out to be the perfect place! 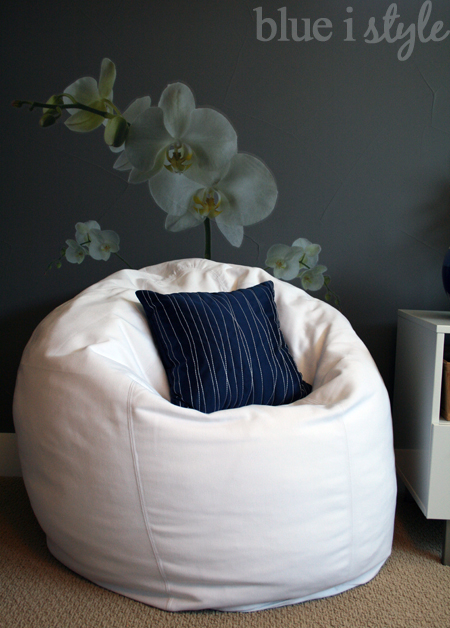 I also added a potted orchid to the butler tray – fake of course, as I don’t have much of a green thumb! 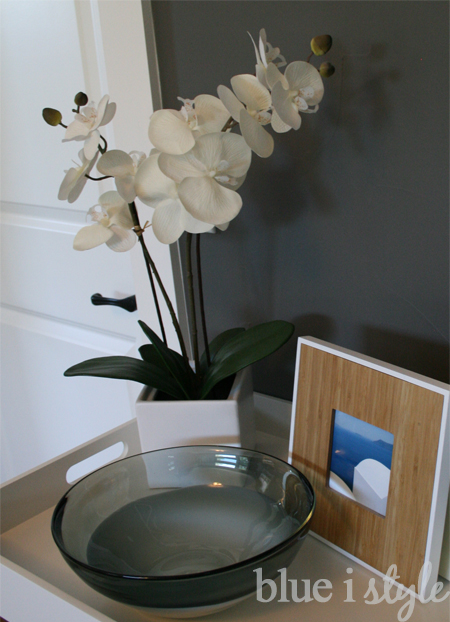 Also consistent with the design of Mykonos Grace Hotel, I wanted to add some touches of bamboo throughout the room.  I found bamboo bins at the Container Store that fit perfectly into the three openings of the white console.  I use them to hold extra blankets and travel magazines. 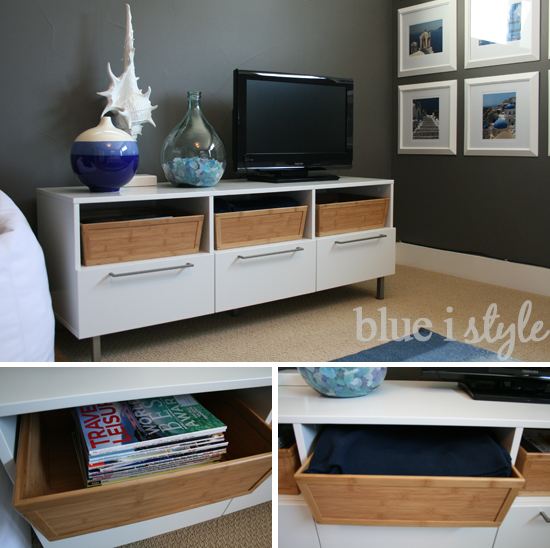 Other bamboo accents in the room include the desk stool, and the boxes on the desktop, as well as the butler tray stand. 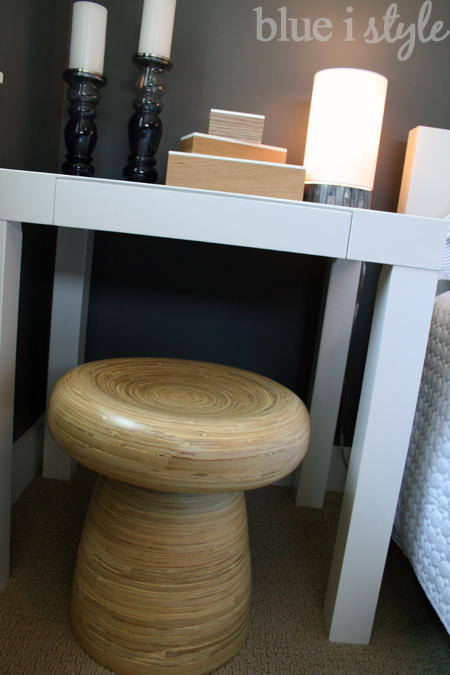 The islands of Greece are awash in white and blue, so a few blue accessories were needed to complete the color scheme of the guest room.  I just love that the vase (Crate & Barrel), rug (Target), and pillow (West Elm) each fade from darker shades of blue to lighter, reminding me of the way the ocean appears to change colors at different depths. 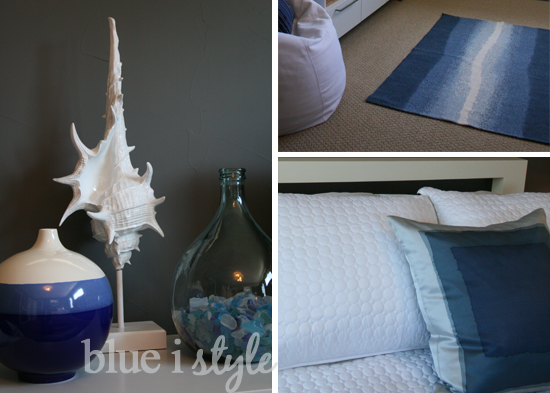 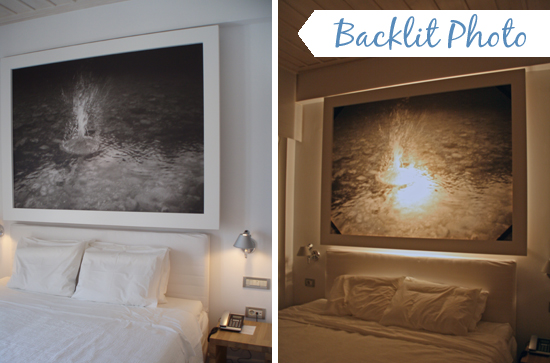 I knew I had to find a way to recreate this in our guest room, and after much research and internet searching, I found a company called Photo Glow that specializes in backlit frames.  We spent a long time debating which photo from our honeymoon we should use for our Photo Glow frame.  We thought about using a photo of the waves crashing on the beach, but when we thought back on our time in Greece, we kept recalling the amazing Santorini sunsets, so we selected a photo that we took of two wine glasses on the balcony of our hotel room on our first night on the island.

The backlit photo above the bed at Mykonos Grace was massive in scale – as wide as the entire bed.  I would love to have a photo as large as the one at the hotel, but we opted to order the largest standard size available from PhotoGlow.com because we were already splurging as it was, and we just couldn’t justify the much higher price to order a larger, custom size.  But at 28″ x 40″, the backlit photo frame is still large enough to make a major impact in the room. 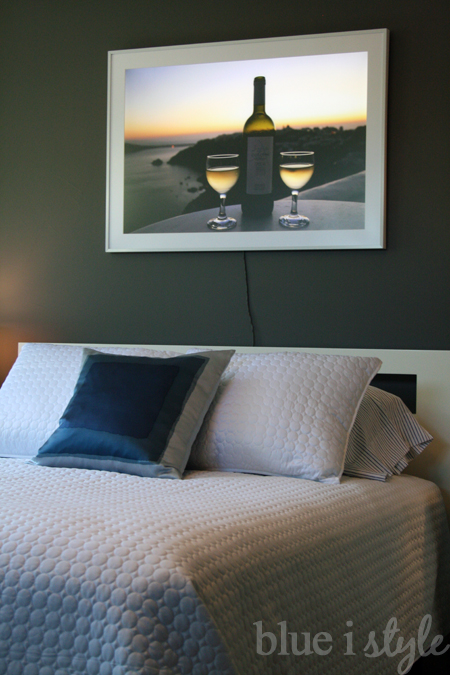 While we couldn’t justify the added price for an even larger framed photo, we did pay the small added expense to have an electronic dimmer installed on the frame, which can be controlled by a small remote control.  It’s very convenient to be able to turn the frame on and off without having to plug and unplug it all the time, and it’s just plain fun to use the remote to adjust the brightness of the light…it’s almost like being able to control a sunset with a remote control. 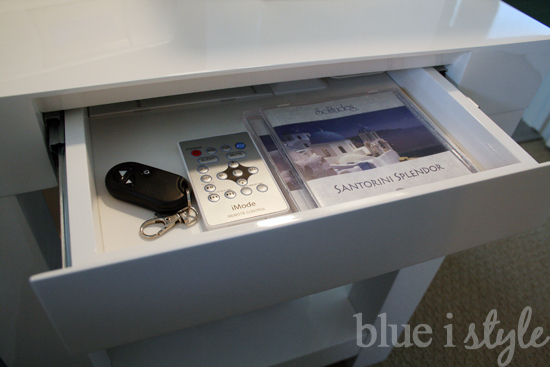 Seeing the photo lit up, it truly glows like the sunset.  The photo looks great during the day, but at night, it really becomes the star of the room. 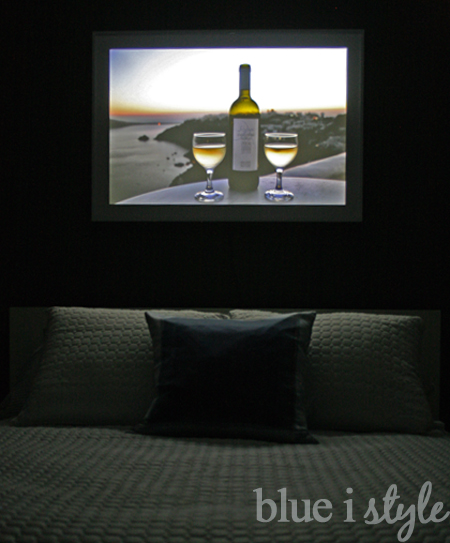 I couldn’t be more pleased with how the guest room turned out!  I love sharing with our guests a little taste of the Greek islands!  Click here to see how the Greek inspiration carried through to the en suite guest bathroom.

Looking for more creative ways to incorporate your wedding and honeymoon momentos into your home decor? Check out these links: