Out of the blue, my six year old came up to me a couple of weeks ago and started running his hands through my hair. His little fingers were clearly searching for something. I asked him what he was doing, and he turned to his four year old brother and said, “I can’t find them, but I know mom REALLY does have eyes in the back of her head.”

I couldn’t stop laughing! I don’t even remember telling them this, but I must have said it at some point in time, and they’d been having a debate about whether it was really true. Of course, I wasn’t going to break it to him that I usually just know what they are up to because they are still pretty predictable at this age, and because aren’t good at being sneaky yet {they whisper “don’t tell mom” loudly enough that I can usually hear them from the next room}.

But the truth is that every parent could use an extra set of eyes and ears around the house to keep things running smoothly, and now, thanks to my partnership with Hive, I have just that. I can keep tabs on the kids no matter where I am in the house! 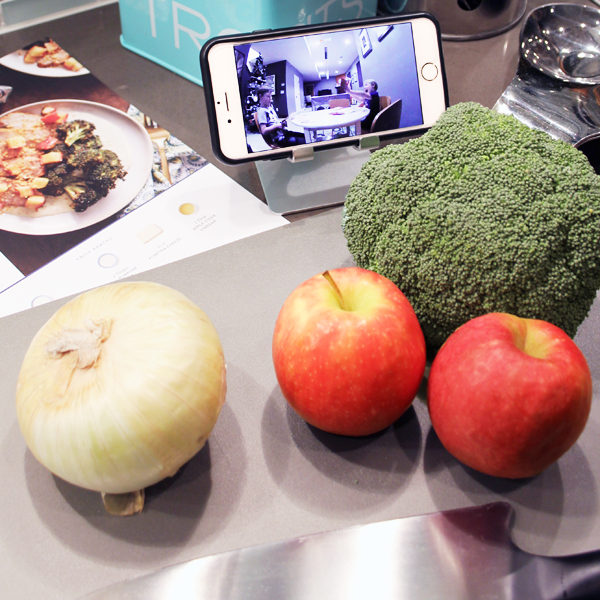 I just received their new indoor camera, the Hive View, to add to our existing smart home ecosystem. We already have Hive Active Thermostats, Hive Active Light bulbs, Hive Active Plugs, Hive Window and Door sensors, and Hive Motion Sensors, which you can read all about in these posts.
One of my favorite things about our Hive Active Thermostats is the sleek, modern design that fits so well with style of our home {as you can see here}, so I was excited when I found out that Hive had partnered with renowned industrial designer Yves Béhar to design the new camera. 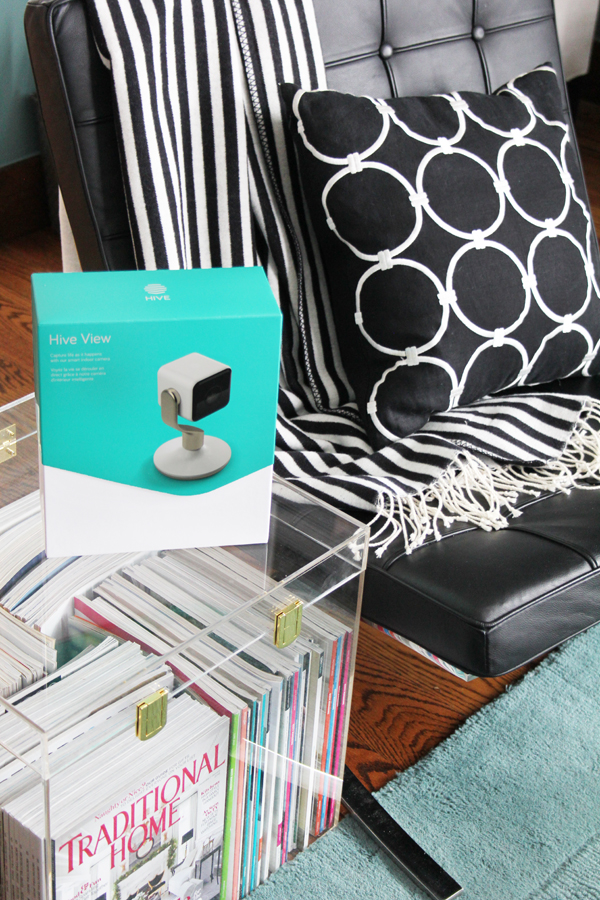 As soon as I opened the box, I could see how much attention had been paid to the detail of the design. 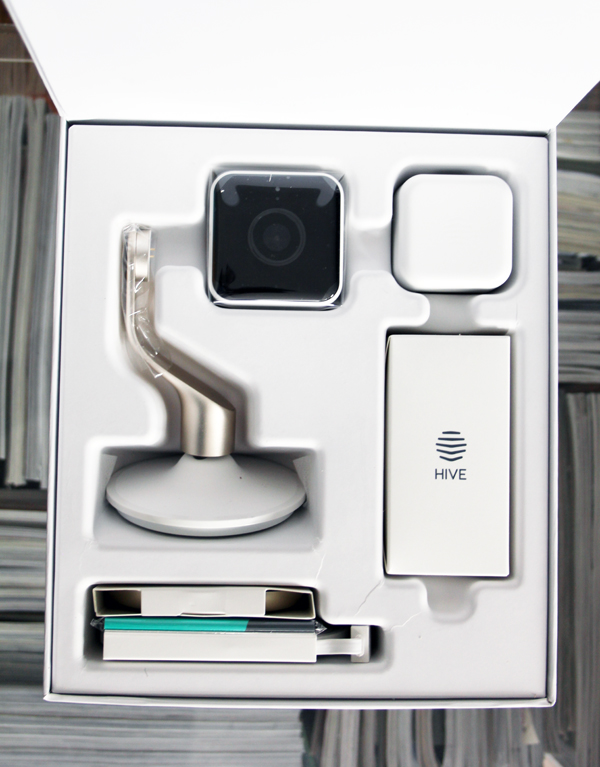 The Hive View comes in two color combos – white and champagne gold, and black and brushed copper. The camera itself, a sleek cube, attaches to the curved base arm with a magnet, so you can grab that cube and carry it with you to another room anytime you want {off the base, the battery lasts more than one hour}. The magnetic mount also means that the cube can be attached the arm at any angle to capture the best view of the room. The base also comes with a mounting bracket, if you prefer to attach is to a surface or wall.

I’ve seen a lot of indoor smart security cameras before, but never one stylish enough I’d really want to see it sitting in my living room. But the Hive View blends right in in our living room! 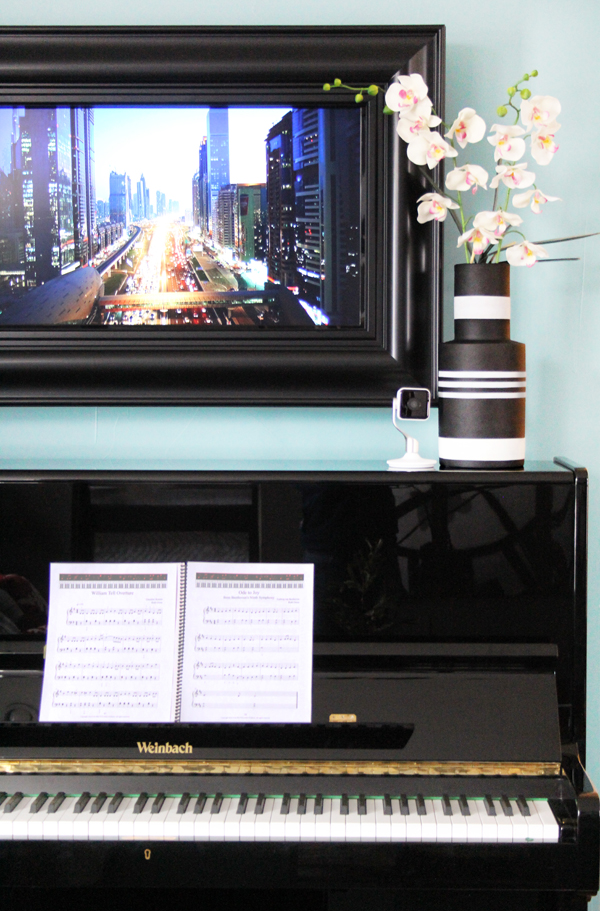 The white camera will be really versatile, since I plan to move it around our house, but just think how gorgeous the black and copper version of this camera would look on the piano! 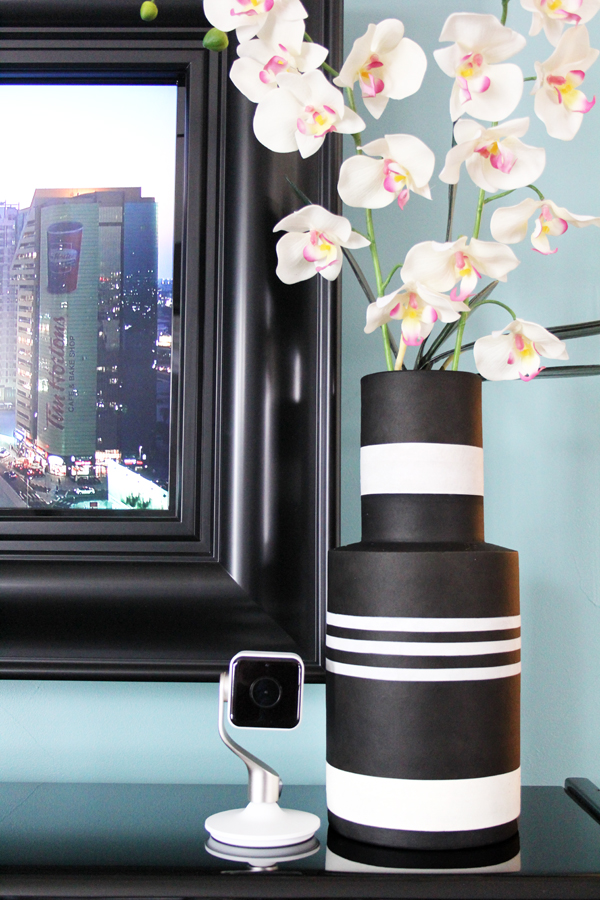 It only took me a couple of minutes to set up the Hive View, connect it with my Hive app via Bluetooth, and have it fully up and running. After admiring the style in the living room, I took it down to the basement family room/playroom where I wanted to test out my plan to let the Hive View be my extra set of eyes and ears while the kids play.

The boys are old enough now that they can play independently, and fortunately they get along really well and love spending time together. But they tend to get loud, as little boys do, and sometimes, from a distance, it’s hard to distinguish if they are fighting or laughing. When I’m up in the kitchen cooking dinner, for example, I’m constantly running to the other side of the house to the top of the stairs to hear what’s going on and determine if I need to intervene. 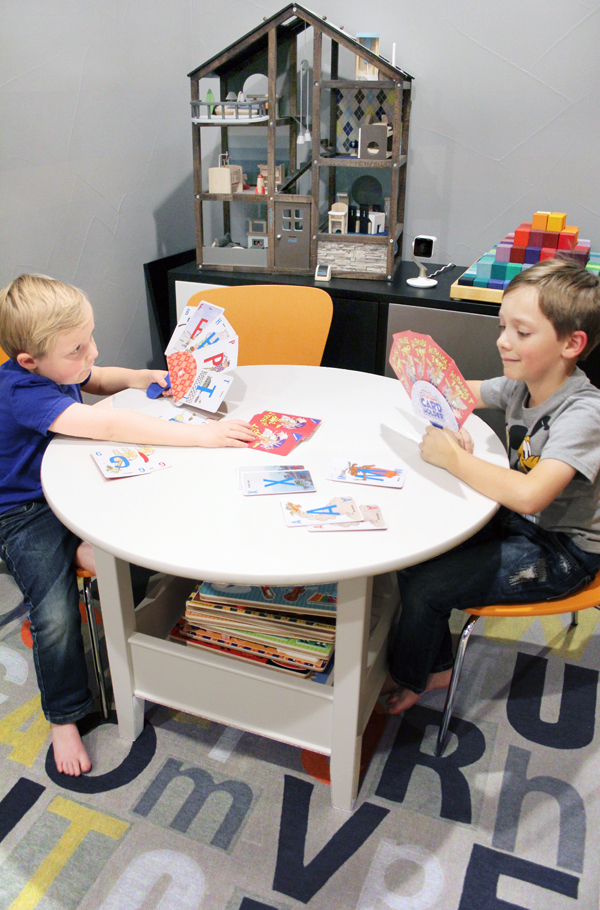 With the Hive View set up in the basement family room, it’s like I really do have eyes in the back of my head. Now I have the peace of mind to know exactly what’s happening in the basement while I’m in the kitchen cooking dinner. And, best of all, I’ll no longer have to worry about letting the kids play in the basement while I go up to the second or third floor of our house, where I previously would have been nervous because they were too far away for me to overhear what was going on. 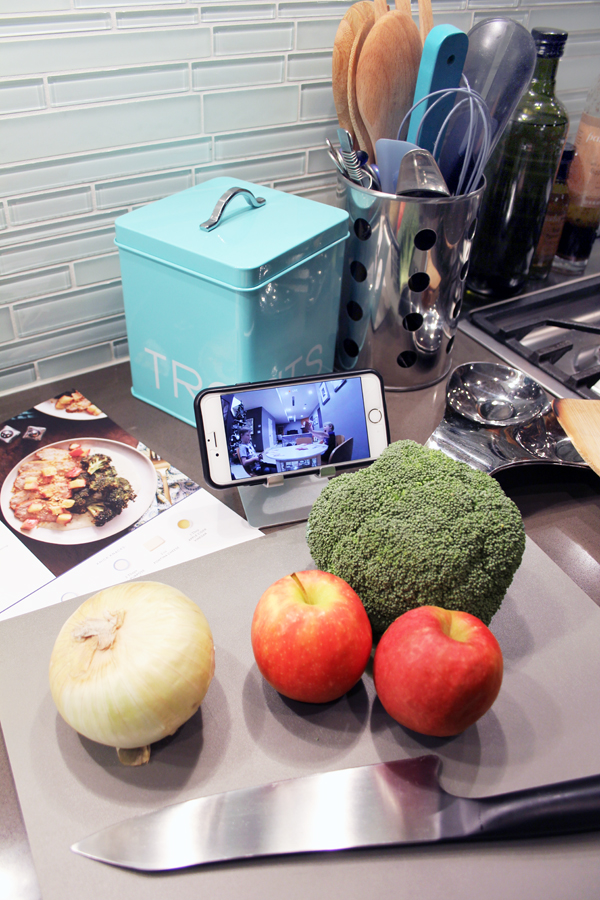 All I have to do is open the Hive app, choose the camera from my list of devices, and then tap “go live.” 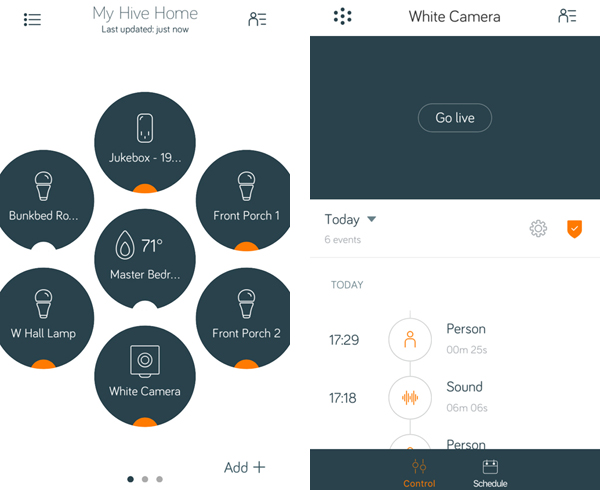 I can watch a 1080p livestream of the boys playing, and with a 130-degree field of view, I’ll be able to keep my eyes on them even as the move around the basement. I was really impressed by the color and crispness of the video, and the sound is really clear. 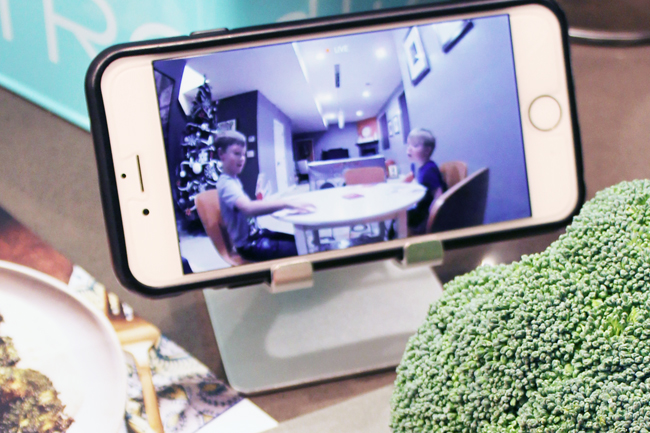 While I’m currently using our new Hive View camera to make mom-life easier, I do love the idea that it can also provide us an added layer of security. Sitting on the piano, the camera could provide us a clear view of the front door when we are away from home. And once again, look how well it blends in to the design of the room! Can you even spot it? I love making our home smarter and safer without having the technology interfere with the look of our home! 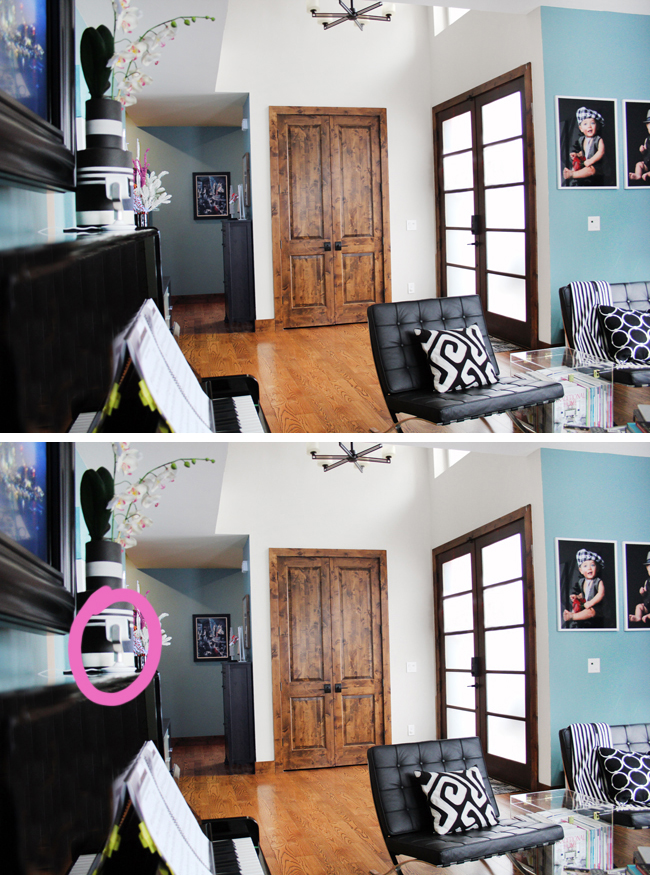 Hive View starts recording when it detects motion or sound, and sends a notification directly to my smartphone. I really appreciate that the notifications tell you specifically what was detected – sound or movement. And the analytics chip is even sophisticated enough to distinguish between people and pets, so that your furry friend won’t trigger an alert each time he or she wanders through the room. Within the Hive app, I can review the last 24-hours of video, or with Hive Video Playback I can watch a 30-day camera history for just $5.99 per month. 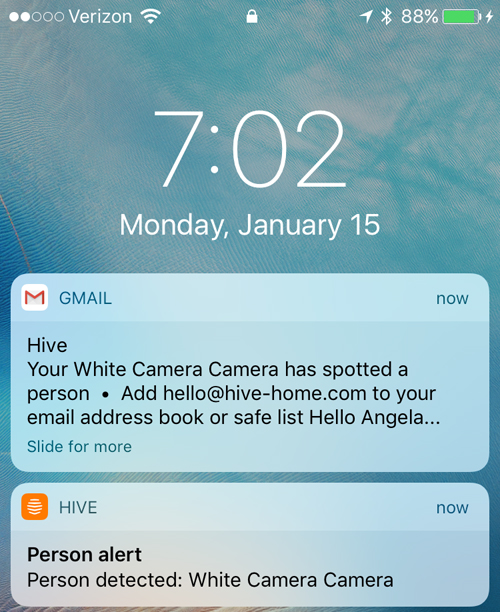 As with all the Hive devices, I love how much control of the camera I have via the app, including scheduling features and even privacy mode. Hive also plans to add a number of new features in the future, so stay tuned for more.
But for now, I’m just thrilled to finally have that extra set of eyes and ears that every mom NEEDS! I’ll be able to be more productive around the house and have the peace of mind I need without having to constantly run down two or three flights of stairs to check on them! 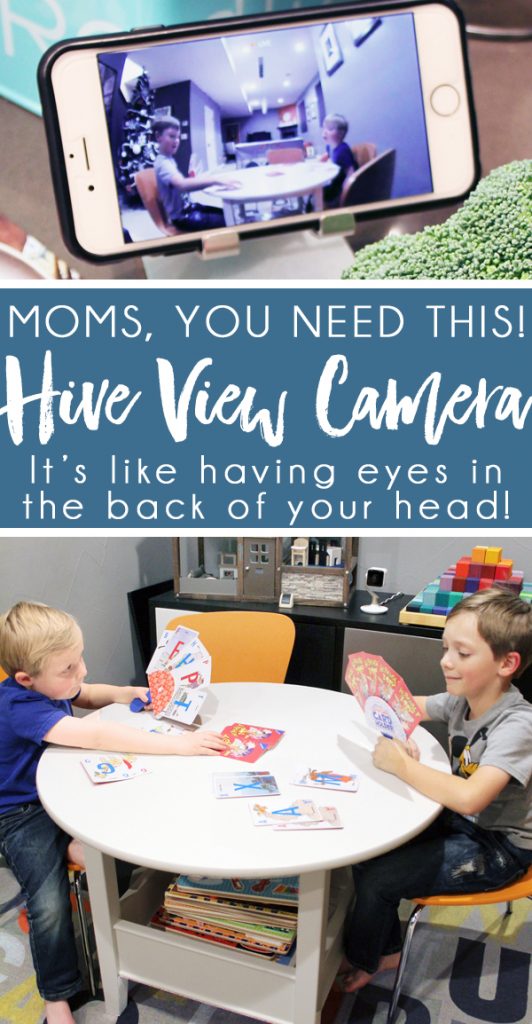 Hive is offering a 10% discount to all of my readers when you use code: ANGELA10, so choose your favorite color combo and let the stylish Hive View camera be the extra set of eyes and ears you need to keep your home and family safe! 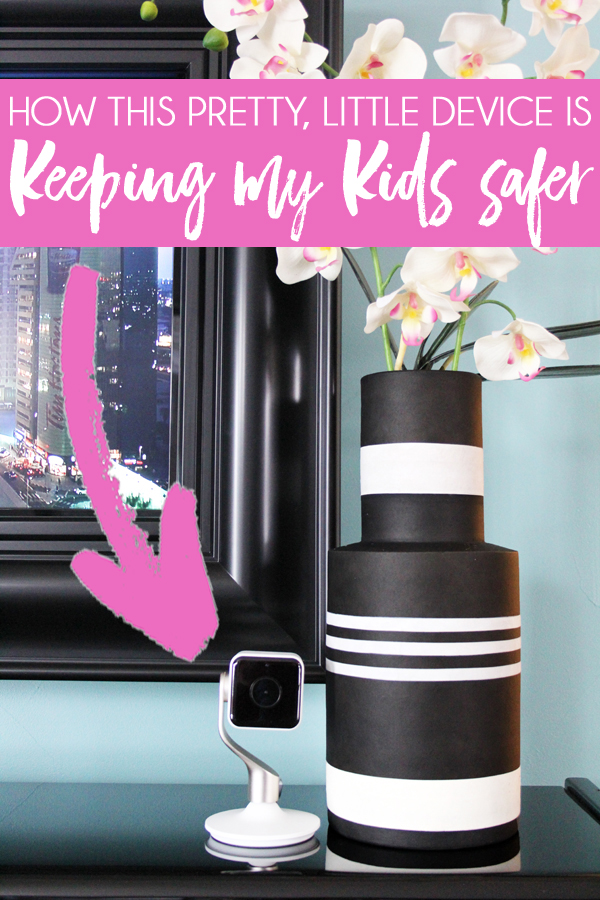 This is a sponsored conversation written by me on behalf of Hive. The opinions and text are all mine. Comments submitted may be displayed on other websites owned by the sponsoring brand.

« Organizing Ideas for Every Room of the House
Water Bottle Storage »