To celebrate my graduation from law school (more years ago than I’d like to admit), my mom and I took a trip to Savannah, Georgia.  While there, we visited a great art gallery and I was struck by a collection of framed photos that appeared to have a metallic finish. It just so happened that the artist was there that day, and after telling him that I admired his work, he proceeded to explain his very complicated process. I don’t remember all the details now, but after we left the gallery (empty handed of course, since the work was far out of my price range), I kept thinking about those photos and it occurred to me that there was a much simpler manner in which I could probably achieve a very similar look: photos printed on transparency film and layer on top of silver paper. 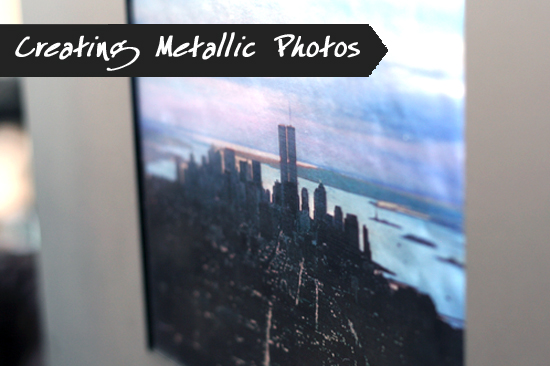 When I got home, I started digging through my photos to find some that would make good test subjects. I came across some photos of the New York City skyline from a college trip. I intended to the frame the photos for my bedroom, but just hadn’t gotten around to it – so they became the subject of my experiment. 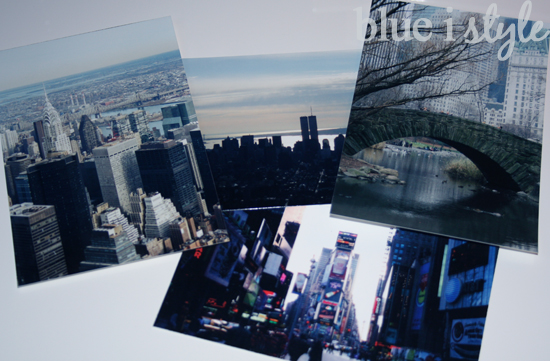 I scanned the photos in and used Photoshop to size them to fit the frames that I had already purchased for my bedroom. Then I took a quick trip out to Office Depot to pick up some transparency film. For those who attended elementary school in the ‘80’s and early ’90’s – you know what I am talking about – those clear sheets used on the overhead projectors. 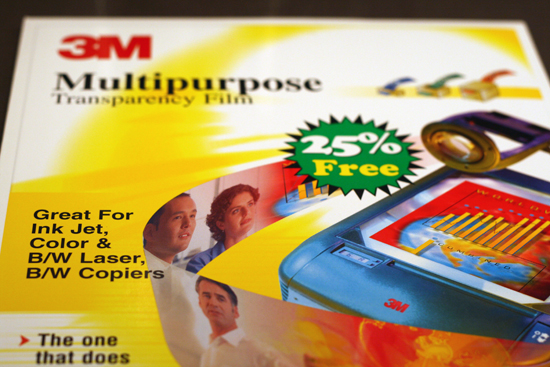 There’s a variety of transparency film available, so be sure to get the kind made for printing, rather than just for writing on, and also ensure that you get the right kind for your printer – inkjet vs. laser (the film I bought was made for both inkjet and laser, depending on which side of the film you printed on). On my most recent trip to Office Depot I noticed that they are now only selling the transparency film in quantities of 100 sheets – much more than you likely need. But you can buy smaller quantities (for considerably less cost) online.  Also, make sure that when printing on transparency film you select the right “paper” type in your printer settings – my printer has a setting specific for transparency film.  If you don’t select the right setting, the ink may come out too wet, or the colors may be inaccurate. 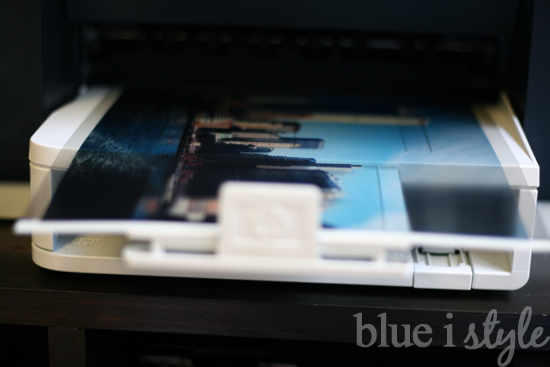 I printed my photos directly onto the transparency film, and was pleased with the results. The colors were still vibrant enough, but when held up to the light it also maintained sufficient transparency. In the photo below you can see the branches of the tree outside my window showing through the transparency film. 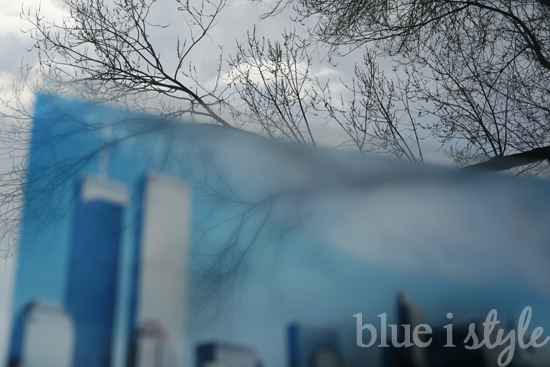 I then grabbed some metallic silver wrapping paper out of the closet and cut the paper to the same size as the photos. I layered the photos on top of the paper and was instantly pleased with the results. The wrapping paper, because it was thin, wrinkled easily. This actually doesn’t bother me because it seems to add some dimension to the sky in my photos. But if you want a smoother appearance, I would suggest you instead use thicker silver scrapbook paper. 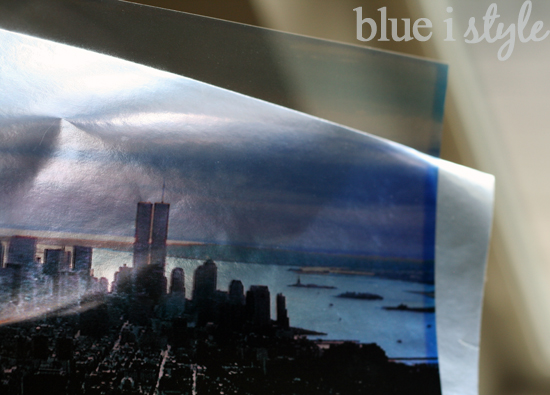 All that was left was to put the pictures in their frames and hanging them on the wall. 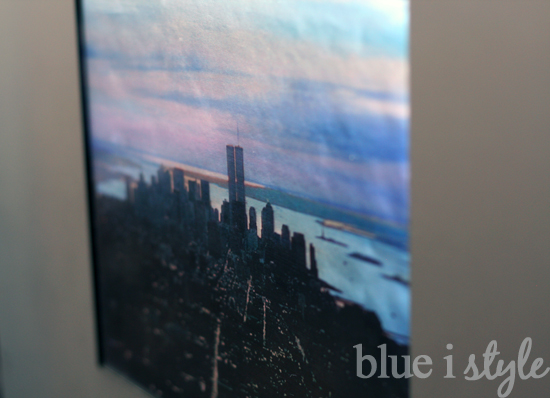 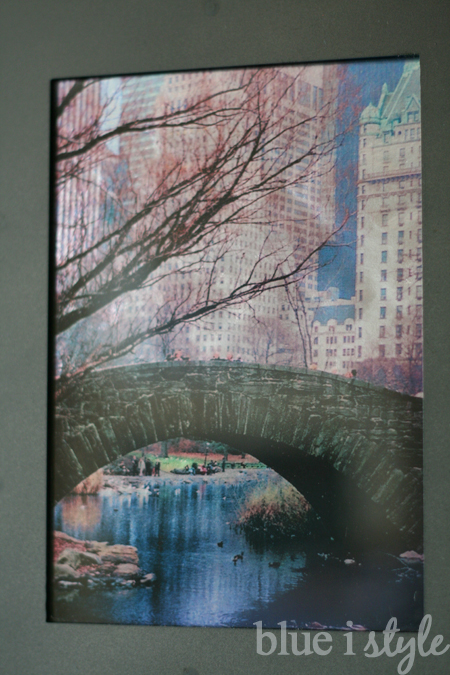 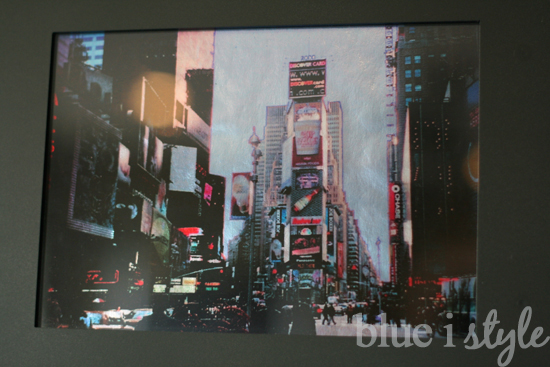 When I first completed this project I was living in a condo downtown, and had a perfect wall for the photos directly across from a large west facing window. The photos looked especially great in the early evening when there was direct sunlight streaming through the windows and glowing off of the metallic finish of the silver paper. 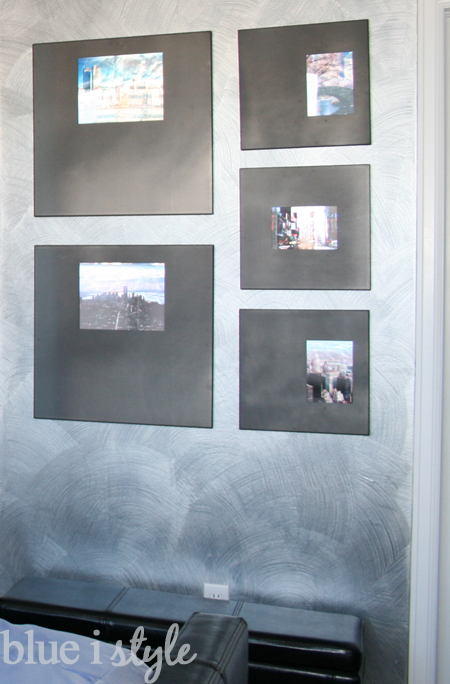 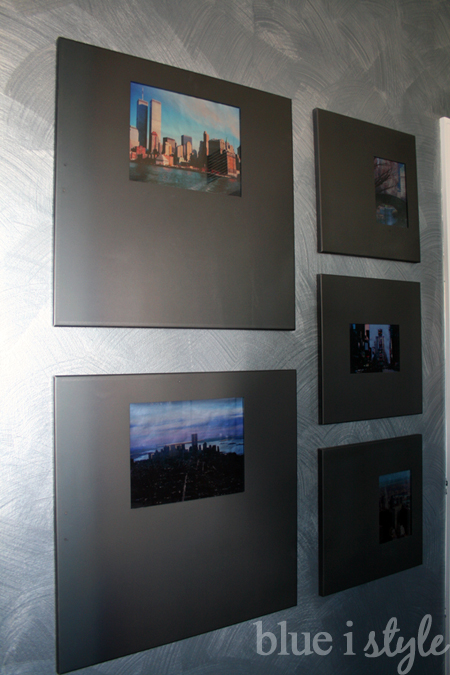 Where I have them hanging now, they get less direct light, so some of the effect is lost – but these photos still attract attention and elicit a lot of questions.

Since, I first completed this project, many photo labs (including online photo printers like Snapfish) have started offering prints on metallic photo paper – but these photos, while vibrant, don’t seem to have quite the same “glowing” effect. Other companies are now offering photos printed on sheets of metal. These are gorgeous, but expensive, and can be damaged by prolonged exposure to sunlight – the very sunlight that enhances their metallic appearance. What I love about my simplistic alternative is that it was so easy to DIY at home, and the photos could easily be reprinted if damaged by sunlight, or changed out to feature different photos from time to time.

Has anyone else tried this, or a similar method? How did it work for you?