If you’ve been following my progress on my master bedroom redesign for the One Room Challenge, then you already got a peek at this project yesterday, but today I’m giving you the details. One of my big projects for our bedroom is a gallery wall to help hide our television. In addition to photos, I knew I wanted the gallery to include several works of art – preferably art with some texture or dimension to balance out all of the metals and straight-lines in our modern design plan.
While shopping at West Elm a few weeks ago, a couple of pieces of art really caught my eye, including a framed piece of handmade paper. I liked the natural texture and color, but because it was square in a square frame, it still had a modern feel to it. The only thing I didn’t like was the price tag. I was hoping to spend under $100 for my entire gallery wall, including all of the frames, so there was no way I could spend $189 on a single piece of art.
Instead, for just $10 and in only five minutes time, I took the idea and created my own knock-off version! 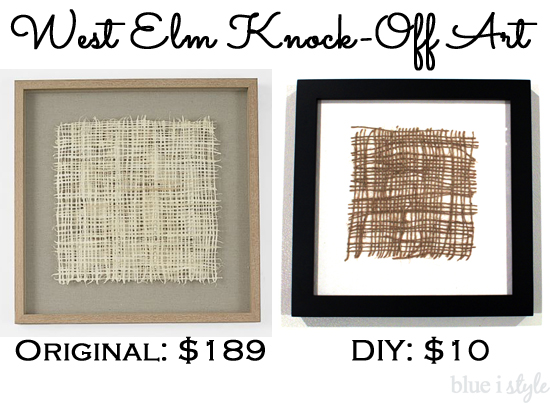 The best part of creating your own art, besides the savings, is that you can customize it to fit your needs! The original was larger than would fit well into my gallery wall, so I chose an 8×8 square frame. While I could have more closely matched the original by picking a light wood frame, I instead chose a black frame to coordinate with my other gallery wall plans. 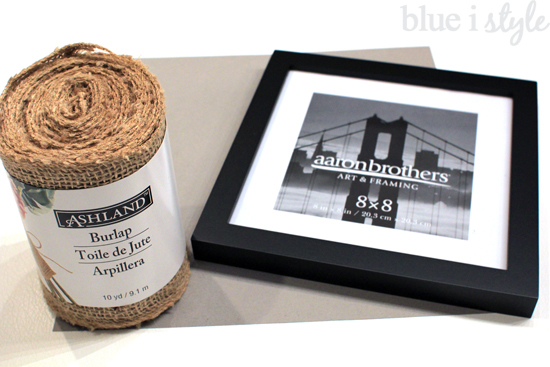 I purchased the frame during a big sale at Aaron Brothers frames {both Aaron Brothers and Michaels are currently having BOGO sales on frames – and I had an additional coupon}. The original West Elm art was a framed piece of handmade paper, but I decided to use burlap for a similar look. I already had a roll of burlap that I had purchased for another project, but if you don’t need a whole roll, you could buy just a small piece off of a bolt at a fabric store for a couple of dollars. 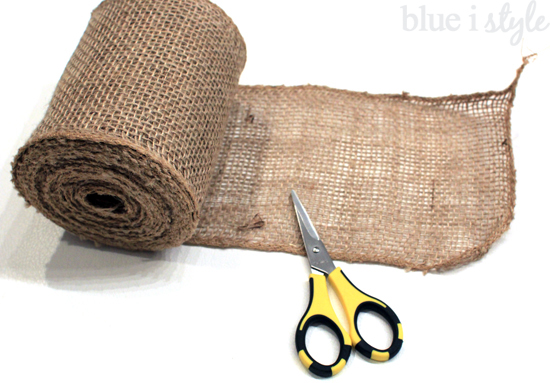 I unrolled the burlap, cut off a piece, and trimmed off the finished edges. 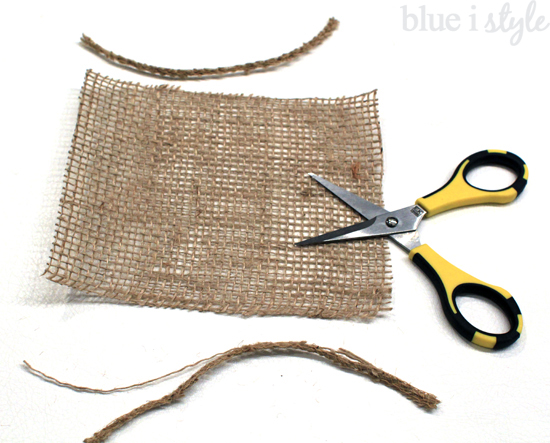 I originally planned to give my art a grey background, like the original inspiration piece, so I cut a square of grey scrapbook paper to fit inside the frame. 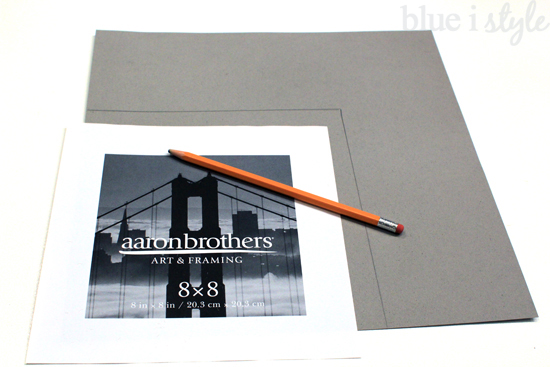 Rather than trying to glue the burlap to the paper {which I feared would look messy because of the open weave}, I simply sandwhiched the burlap between the glass and the paper, then secured the back of the frame in place. 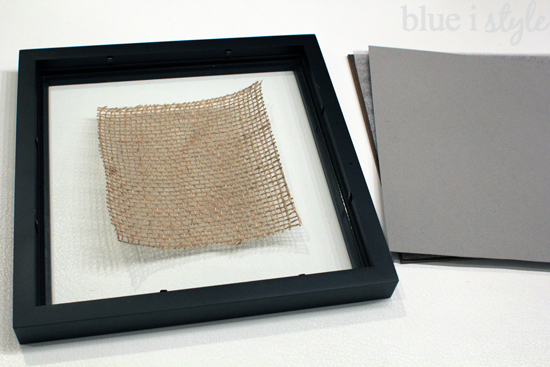 This is what my first attempt at this project looked like {and if you saw yesterday’s One Room Challenge update post, this is what you saw}. I liked it, but it just wasn’t right. Two things bugged me about it. The burlap looked a little too perfect, and the although I liked the grey background which mimicked the original, I feared it wouldn’t look great with the white mats of all of my other gallery wall frames. 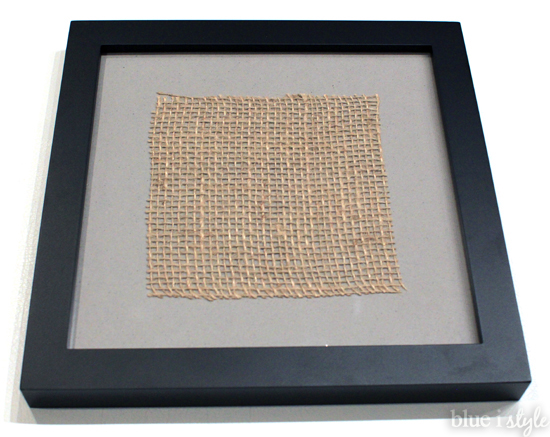 I decided to make a couple of tweaks to see if I could improve upon it. I took the burlap back out of the frame and began pulling a few “threads” out from the edges and used my scissors to trim the edges to be a bit less even. I liked the direction it was headed, so I continued to pull a few threads out from the center of the square and used my fingernails to push threads around, making the weave less even. 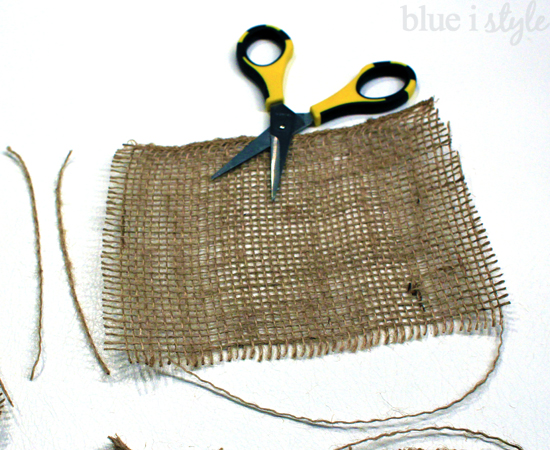 Since nearly all of my gallery wall frames will have white mats, I wanted to see what my burlap square would look like on a white background. I chose a piece of white handmade paper from my scrapbook supply {about $1.50 from a local craft store}. 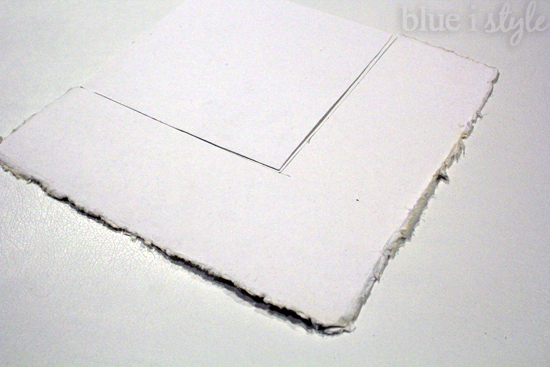 Here’s what I ended up with. It doesn’t read in the photo, but the white background paper has a nice texture that enhances the natural feel of the burlap. 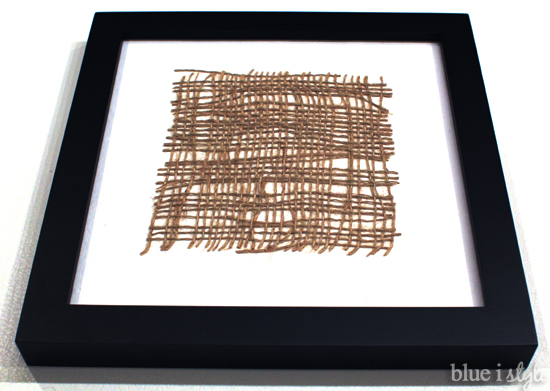 Even though it took me two tries to get to a final product I was happy with, this entire art project only took me five minutes. Talk about an easy way to save $180! My two different versions look quite different, which drives home my point that the best part of creating your own art is the ability to customize it to fit your needs!

The grey scrapbook paper backing looked more like the original {imagine it in a light wood frame, and you can see it would have been a pretty close match}. But the white mat paired with the black frame will flow better with my gallery wall plans, and I ultimately prefer the look of the “less perfect” burlap.

While I was at it, I also created knock-off versions of two other pieces of West Elm art. These other two projects were also very easy, and I’ll be sharing the tutorials for them soon. 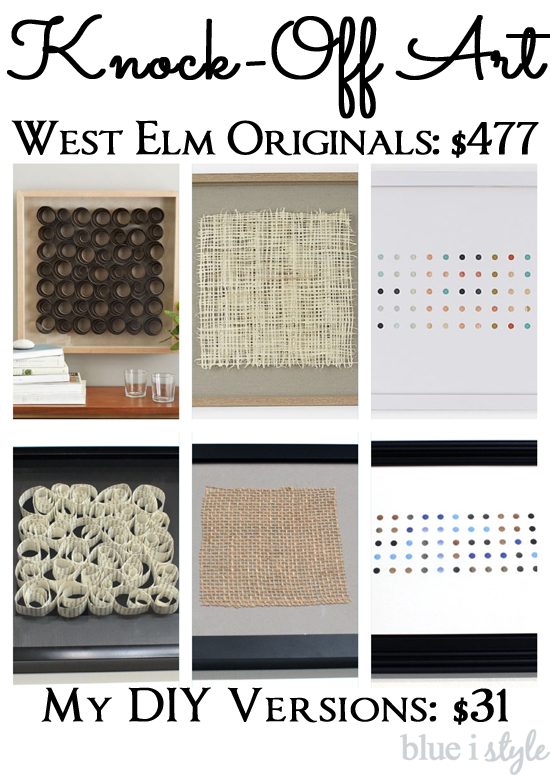 If you are interested in seeing the other progress I’ve made on my One Room Challenge space, you can find all the posts here: