Last fall, I had the opportunity to attend the HGTV Blogger Block Party in NYC where one of the guest speakers was Genevieve Gorder. I used to rush home from law school to watch Genevieve on Trading Spaces every afternoon wishing that I was studying interior design rather than contracts and torts, so it was a total full circle moment for me to meet her in my role as a design blogger!
Genevieve’s presentation focused on her trend predictions for 2016 and 2017, and today I wanted to give you a little glimpse into where she believes interior design is headed this year. This year, Genevieve believes we’ll start seeing the farm to table concept translated into the interior design world. 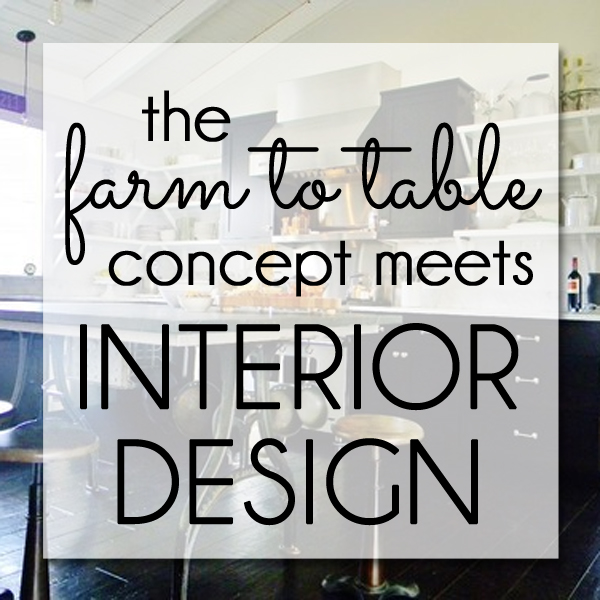 “Farm to table” is a term that refers to serving fresh, seasonal food that has been produced locally. The farm to table movement {once the only way food was available} has been all the rage in the culinary world in recent years, and in 2016, Genevieve sees a similar trend popping up in home decor. 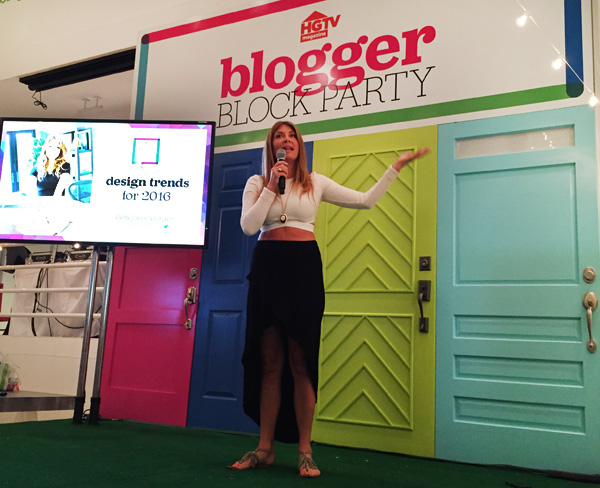 But how does this concept translate to interior design?
Farm to table is about looking in your own backyard and creating something beautiful from what you have available. Detroit, Cleveland, Pittsburgh – the Rust Belt is our backyard. With the decline in US manufacturing, the economy in Rust Belt cities has been hard hit in recent decades. Jobs have disappeared, populations shrunk, and urban blight has overrun many areas.
But, hope is not lost. As Genevieve explains – where ever is cleared out come the artists before the flippers. In 2008, Community Partnership for Arts and Culture published a report titled “From Rust Belt to Artists Belt” that stated “artists are often ‘early adopters’ and embrace the challenges and opportunities of a struggling city prior to its revival.”
This has proven true in recent years throughout the Rust Belt, and especially in Detroit. Manufacturing left behind large, vacant warehouse spaces and scrap materials, and economic decline has driven down the cost of living. Artists are now retranslating manufacturing materials – like steel, leather, and wood – into art and design, which means a that we’re likely to see more industrial elements in interior design.
When you hear “industrial,” you likely picture an urban loft – but if Genevieve’s prediction is correct, in 2016 and beyond, we are likely to see more of these elements making their way into mainstream home decor mixing with more traditional styles. And I’ve already seen this popping up in some of the homes I’ve had an opportunity to tour recently – including far from the urban core.
A few months ago, I attended the Summit County Parade of Homes in the mountains of Colorado. One of the homes featured two different variations of art created from discarded oil drum lids. The first is this rough and rustic art that created a perfect contrast to the more traditional console table and vases below… 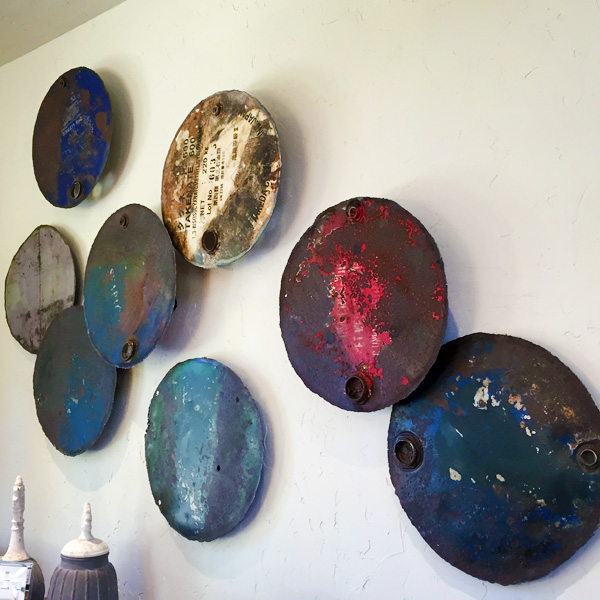 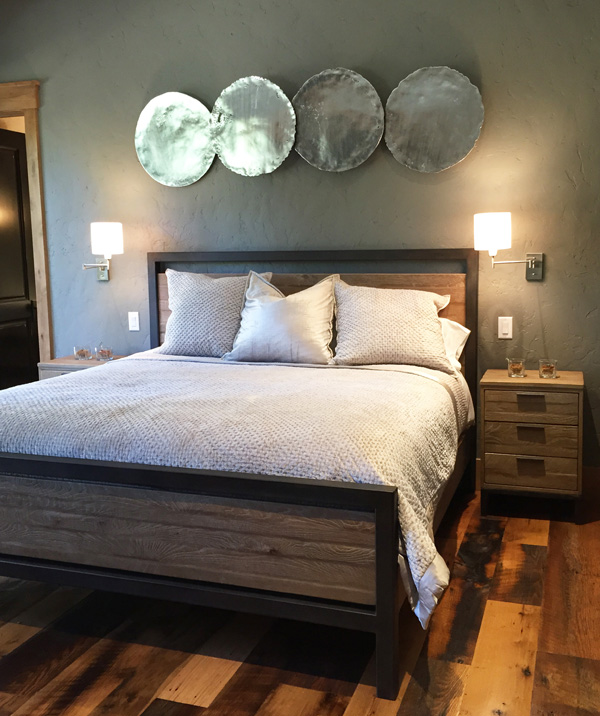 In addition to oil drum lids being used to create art, I even found Etsy seller AireCollection selling furniture crafted from flattened oil drums, like this gorgeous console table, as well as a coffee table and chairs! 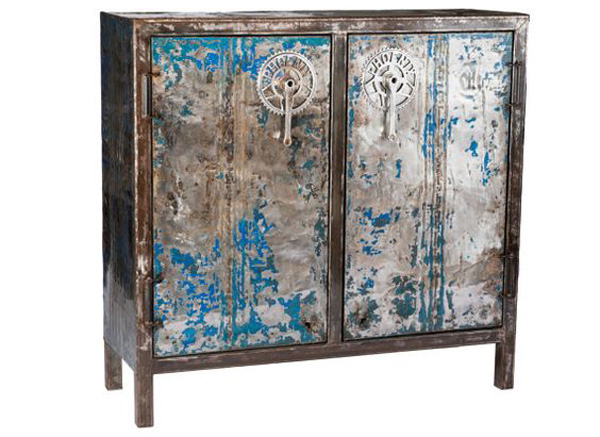 We all know Detroit as the motor city, so it’s no surprise to see car elements popping up in interior design as well. Root Down, a restaurant at Denver International Airport, has an entire wall adorned in jet shaped antique hood ornaments. 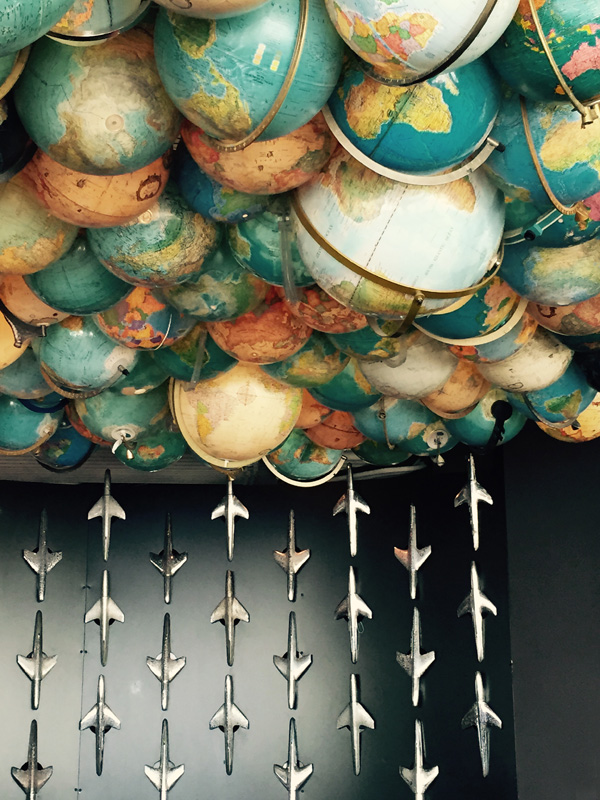 I searched Houzz – my favorite resource for interior design inspiration – for some more examples of industrial elements being incorporated into various styles of decor.

In this kitchen, the stools are fashioned from marine dock springs. 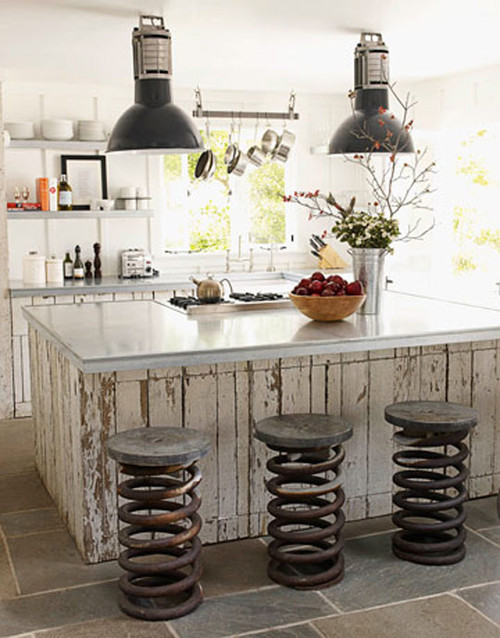 Eclectic Kitchen from Houzz
GET THE LOOK:

I love large-scale art, so the giant industrial gears in this room immediately caught my eye! 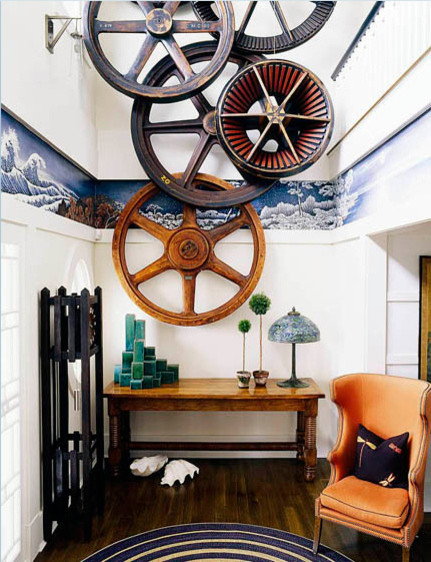 In the next two photos, I am completely smitten with the use of machine legs as table bases. Here, the island legs and the industrial stools are contrasted against the simple lines of the kitchen cabinets. 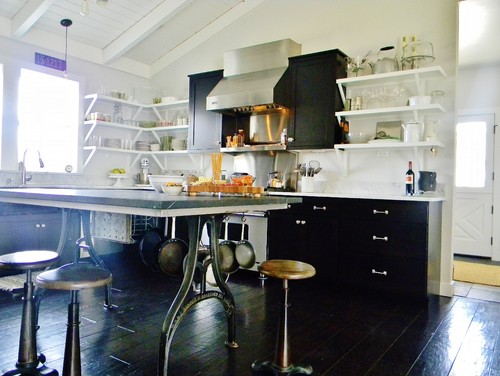 And this entryway proves that an industrial element, like this table base that was once part of a shipping scale – can be incorporated into any space, even a bright and traditional farmhouse entryway. 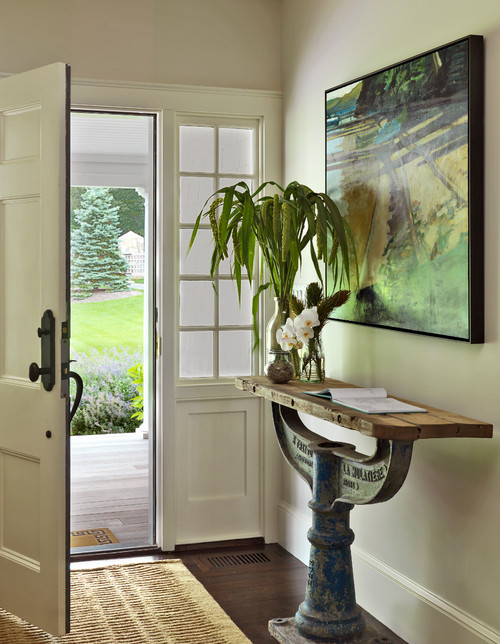 This wine storage below the stairs is not only a great use of space, it’s a great way to repurpose glass milk bottle crates! 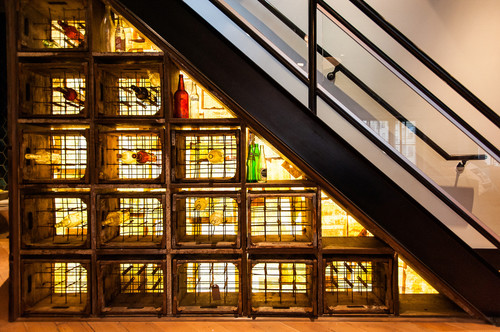 The bright, open living area below features two eye charts cut from industrial steel. The round mirror, while not an industrial element, also helps to break up all of the straight lines on the space, and brings to mine an round, industrial-styled bookcase that I recently fell in love with {link below}. 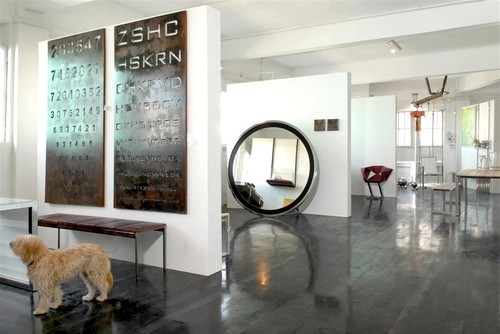 Referred to as the scraphouse, this home was constructed from salvaged materials. I dig a good feature wall, so I’m loving the strips of metal behind the bed! 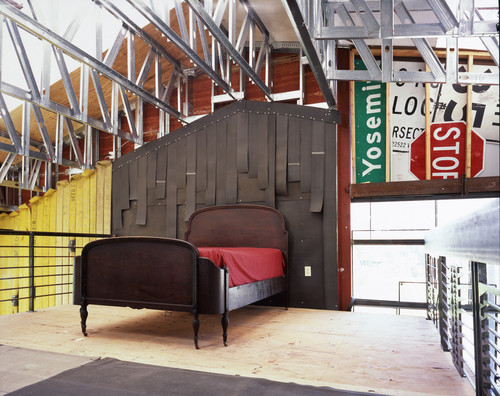 The variety of textures in this living room give it a very cozy feel – from the linen look of the walls to the rustic wood of the rolling coffee table. 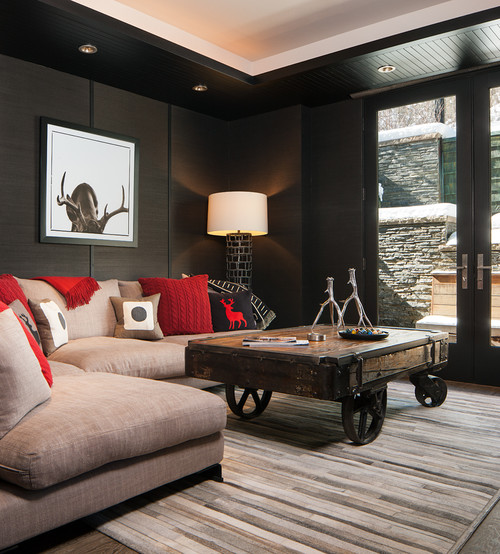 These bedrooms both have tin tile feature walls – one with individual, hand painted tiles, while the other captures a similar look with tin tile inspired wallpaper. 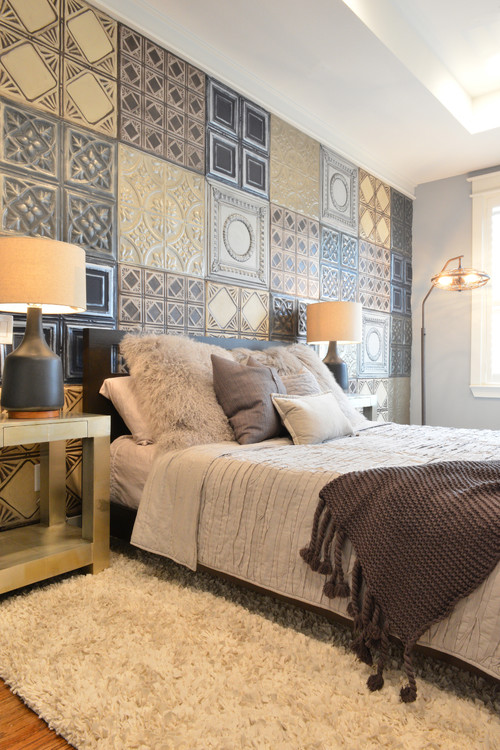 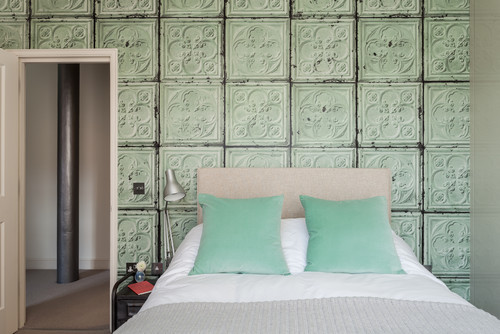 Contemporary Bedroom by East Midlands Interior Designers & Decorators Michelle Chaplin Interiors
GET THE LOOK:
Here’s one more use variation of an oil drum… this time fabricated into a unique vent hood. 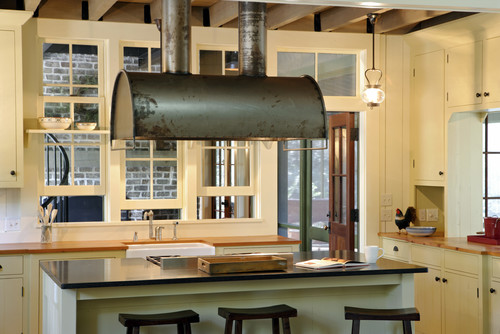 This last space, at first glance, is probably to starkly industrial for most…but what jumped out at me about it was actually the wood sawhorse at the end of the bed. What a simple and easy addition to a boys room to give him a place to hang clothes and blankets! 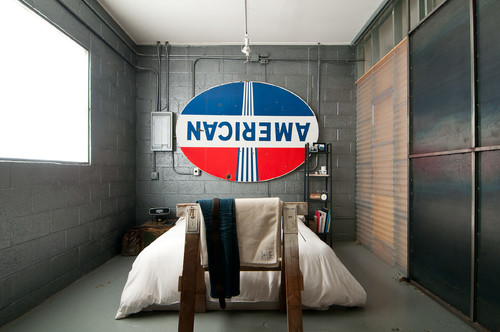