As a general rule, I don’t like to recycle content here on the blog, but with Easter just around the corner, I feel like an exception is warranted. Last year, despite Beckett being only 15 months old, I was really eager to help him decorate Easter eggs. I originally planned to just have him put some cute stickers on eggs, but then I happened upon a super inexpensive product at Target that promised a mess-free way to dye eggs, and I decided to give it a try.  Beckett had so much fun using the “Spin an Egg” (by Dudley’s) and I was super impressed with the results, but because we didn’t dye our eggs until Easter morning, my blog post the following week was not exactly timely!

Since I know that many of you have toddlers of your own, I decided it would be worth while to once again share my recommendation of this simple and fun product so that you can pick one up if want to give it a spin this year! I can’t confirm whether Target is selling the Spin an Egg again this year, or if the price is the same {I only paid $6}, but I do know it can be purchased on Amazon – the price isn’t as good, but it does qualify for free Prime shipping so you could have it by the weekend.


You can read the original post in its entirely here, including instructions on using the product. 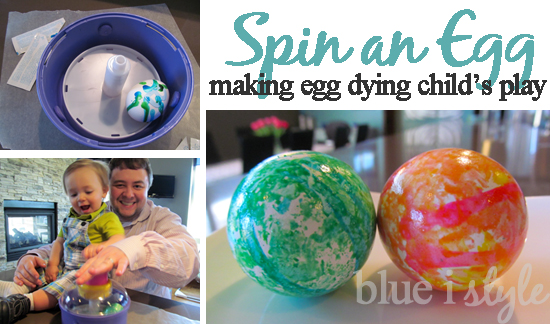 We’ll definitely be using the Spin an Egg again this Easter! I know Beckett will still love it, and I’m hoping that Cooper {who is 10 months old now} will also be able to get in on the action. We didn’t save the left-over dye that came with the product because I suspected it would spill or dry out over the course of the year, so we’ll be makng our own dye this time around. I included, in the original post, a simple recipe for making Easter egg dye.

{Note that I was have no affiliation with this product, I was simply impressed by it and thought others might be interested in our experience}