After having so much fun drawing inspiration from menswear when decorating Beckett’s new “big boy” bedroom, from the argyle wall and the houndstooth rug, to the neckties on the play tent and the belt wall shelves and drawer pulls, I hit a road block when it came to the lampshade. I thought about covering a shade with a suiting fabric – like pinstripes or herringbone, but I was afraid a pattern would be too busy when with paired with all of the various art above the dresser.  I finally decided to simply leave the lampshade plain and call the room done. That is, until I was gathering up the extra belts that I needed to return to the store and realized that I a belt wrapped around the lampshade could look really great. 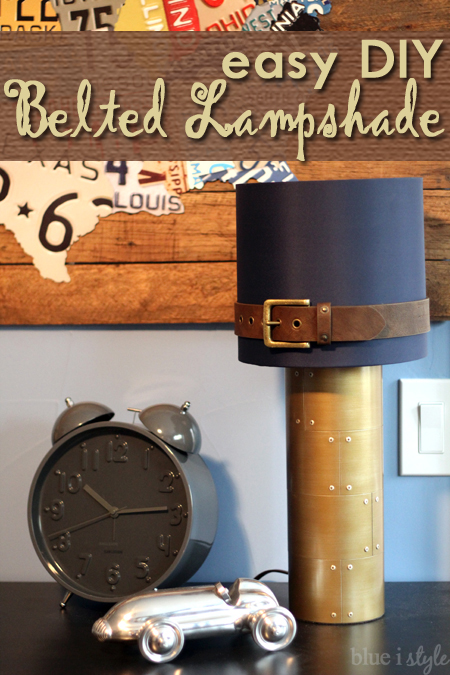 I had hoped that I could simply wrap the belt around the lampshade and buckle it in place, but the belt was just too long. 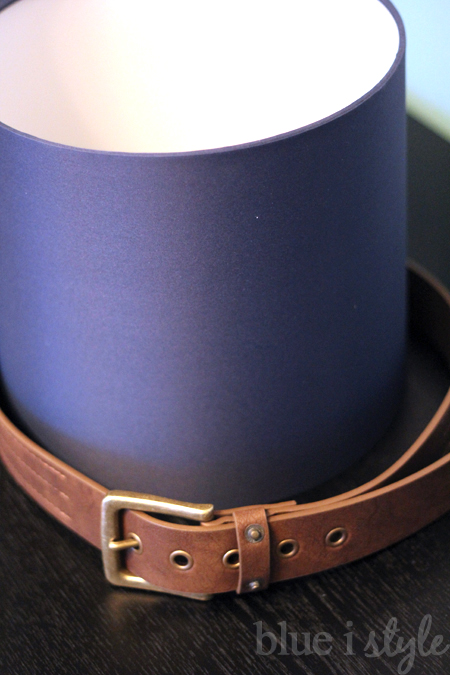 My mind often approaches things from the most complicated angle before coming up with a simple solution, so my first thought was to somehow shorten the belt. Yeah, I know. But the next day it dawned on me that the lampshade had a seam in the back, so there was no reason the belt couldn’t be seamed as well. 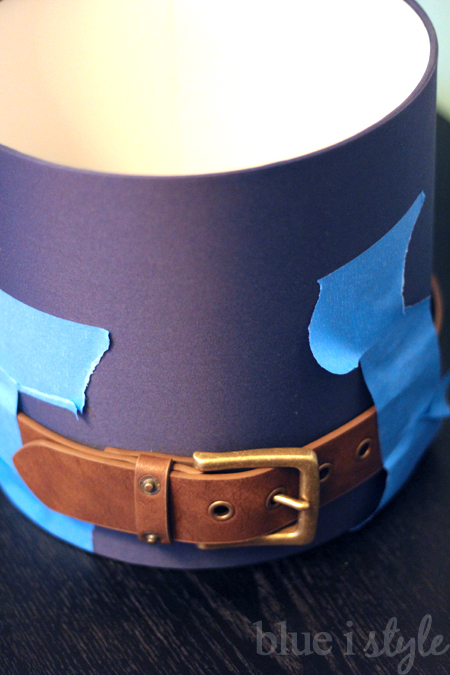 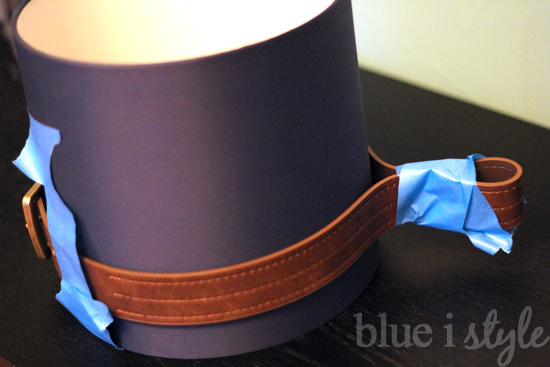 This allowed me to see exactly how much of the belt to cut off, and ensured that the two cuts ends would meet at the back of the shade even with the seam. 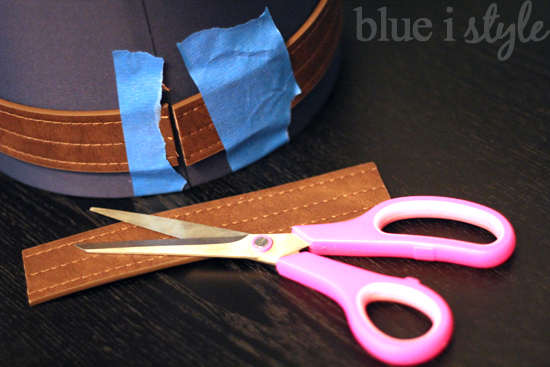 Next came the question of how to affix the belt to the lampshade. I thought about using hot glue, but feared that it wouldn’t hold up well over time. Instead, I opted to use a permanent fabric glue that had been recommended to me by mom (who works with fabric much more than I do). I first applied the glue to the back of the belt on either side of the buckle, then placed the belt on the lampshade. I laid the shade down on its side (seam side up), and continued to add glue to the back of the belt, pressing it to the shade little by little until the entire belt was attached. 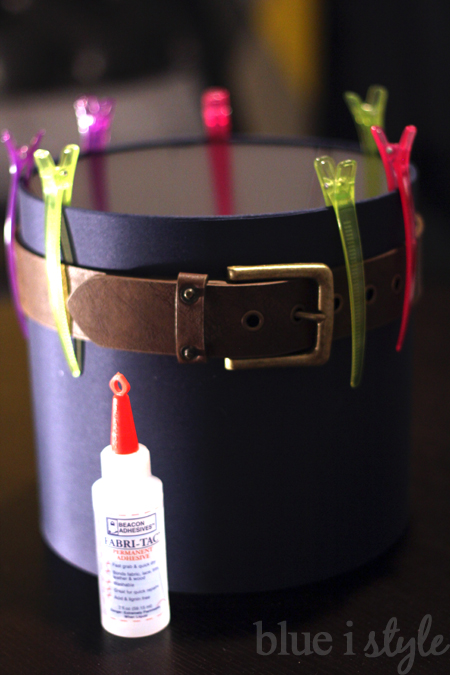 The glue – Beacon Adhesives Fabri-Tac (purchased at JoAnn Fabric) – takes a while to dry, so after affixing the belt to the lampshade, I used some hair clips to hold the belt in place until the glue was dry and the bond secure.

And that’s all there was to it. A simple and masculine belted lampshade, perfect for Beckett’s menswear inspired bedroom. 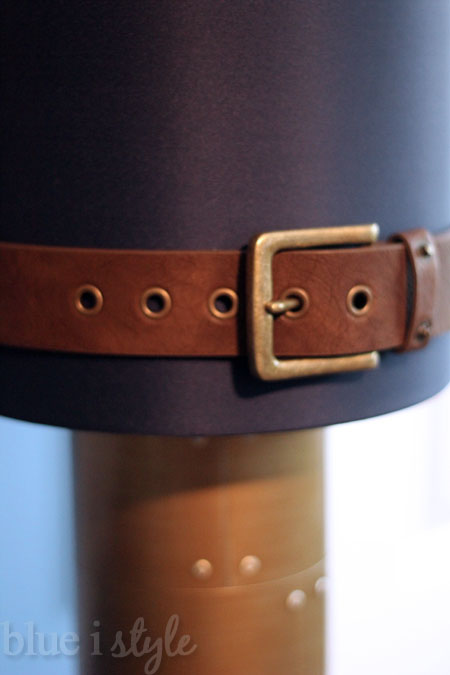 And the brassy belt buckle is a perfect compliment to the Nate Berkus brass rivet lamp base that I scored on clearance at Target a few months back. 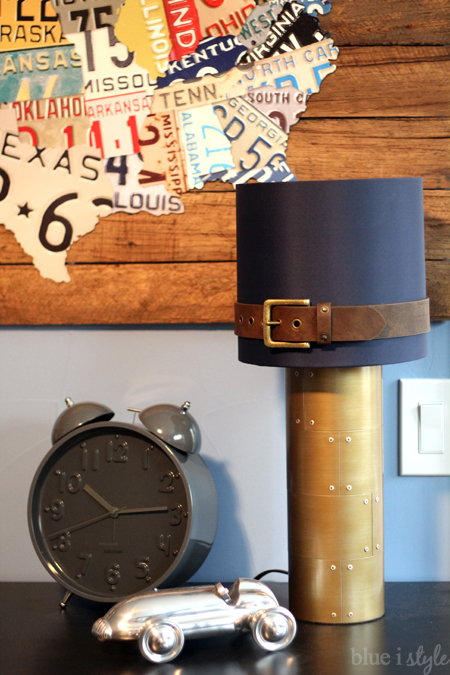 Next week I’ll be back to share the details of the two other belt related project in Beckett’s room – the dresser pulls and the shelves. If you’ve ever used belts in your decor, I’d love to see your projects! 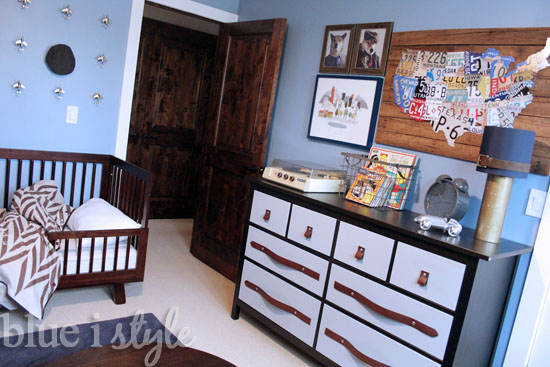 Oh, and see that cool Denver art print on the wall above the dresser? Want to win one of your favorite city? Well, today’s your lucky day. I’m doing a giveaway! Click here to enter! 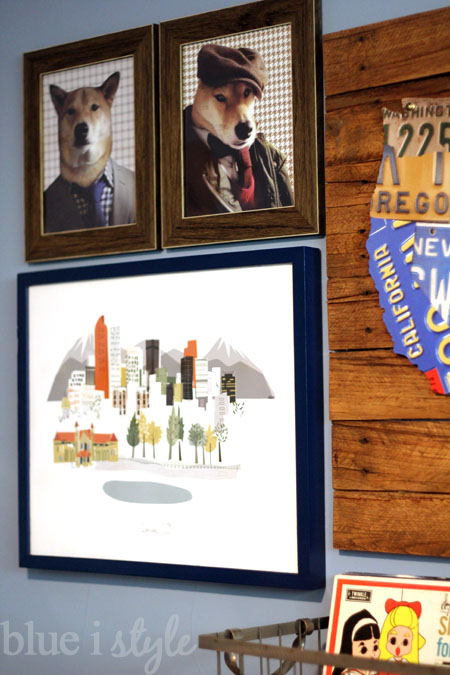