My boys love Disney movies, and Beauty and the Beast is one of their favorites. Last year, Beckett and Cooper announced in March that they wanted to be Lumiere and Gaston for Halloween, but I didn’t think much of it because I assumed they’d change their minds twenty times by the time the holiday rolled around. But when it got to be October and they were still set on the Beauty and the Beast theme, I realized I’d better get their costumes figured out!
I started with a quick online search and found lots of Lumiere and Gaston costumes for men, but almost none for little boys. I was able to piece Gaston together with a few online purchases (and a fun repurpose from a prior year’s Halloween), but Lumiere required me to get a lot more creative! 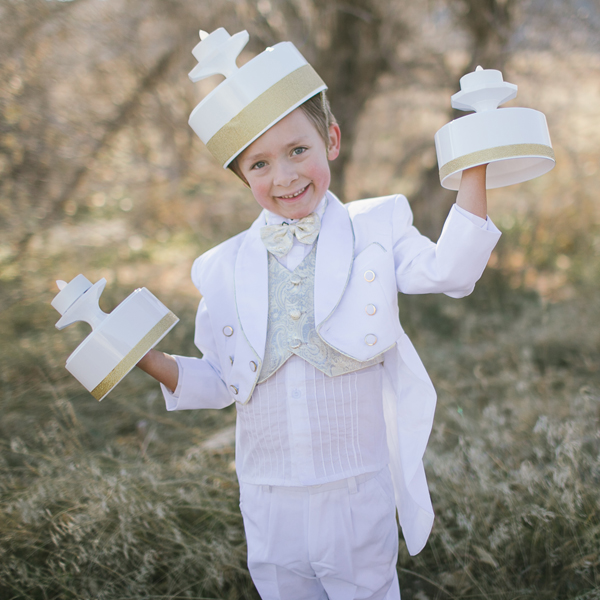 I started brainstorming a new-sew way to create the look of Lumiere’s candelabra and to incorporate working LED candles, rather than felt or paper for the flames. I’m really happy with how my DIY Beauty and the Beast Lumiere candelabra costume turned out, and I’ll show you just how easy it was to create!
SUPPLY LIST: LUMIERE CANDELABRA
Aside from the glue gun and drill that I already owned, all of the supplies I needed to create these simple DIY Lumiere candle hands and candle hat only cost me about $25. This post contains some affiliate links. If you purchase something I recommend, you’ll pay the same price, but I may receive a small commission. 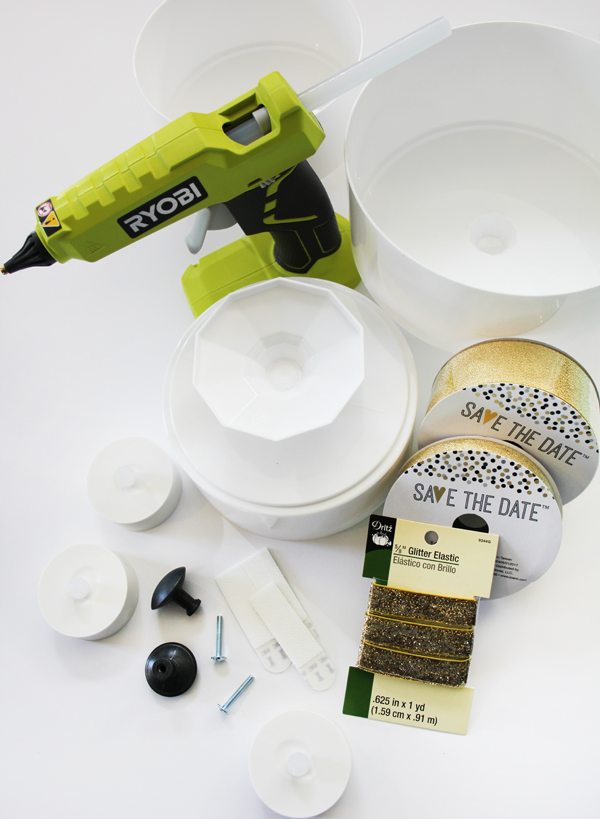 HOW TO MAKE LUMIERE CANDLE HANDS & CANDLE HAT
I was walking through the store shopping for some Halloween party supplies when I came across these white plastic trifle containers. They are made for serving fancy desserts, but the large one is the perfect size for a hat, and the small is just right for creating candle holder hands. 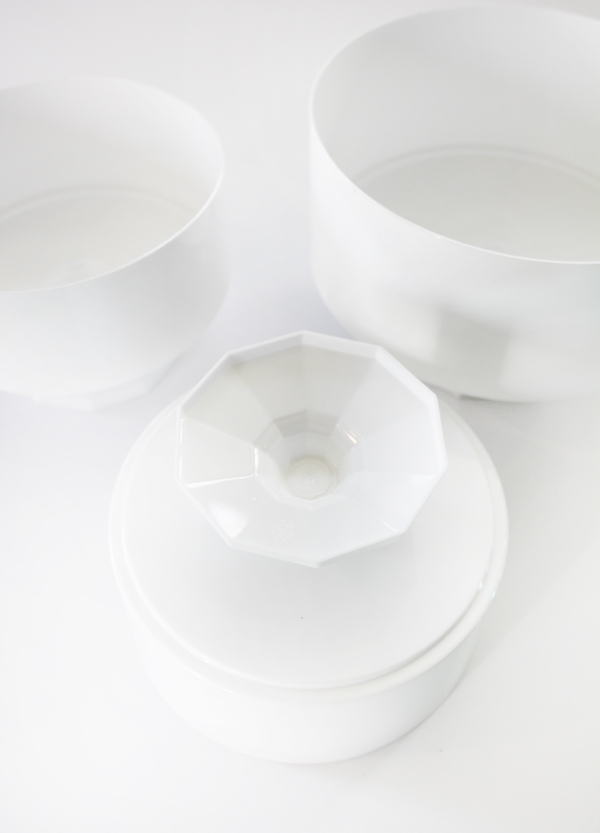 The first thing I had to figure out was how my little Lumiere was going to keep the trifle containers on his hands. I started poking around my craft supplies and searching through my workbench drawers to brainstorm a solution. I came across some simple cabinet knobs, and realized they would make perfect hand hold. 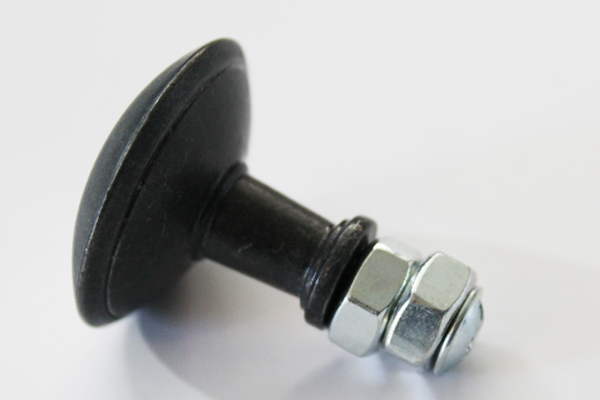 We turned both of the small trifle containers upside down and used our cordless drill to we carefully drill a hole through the center of each using a drill bit to match the size of the cabinet knob screw. 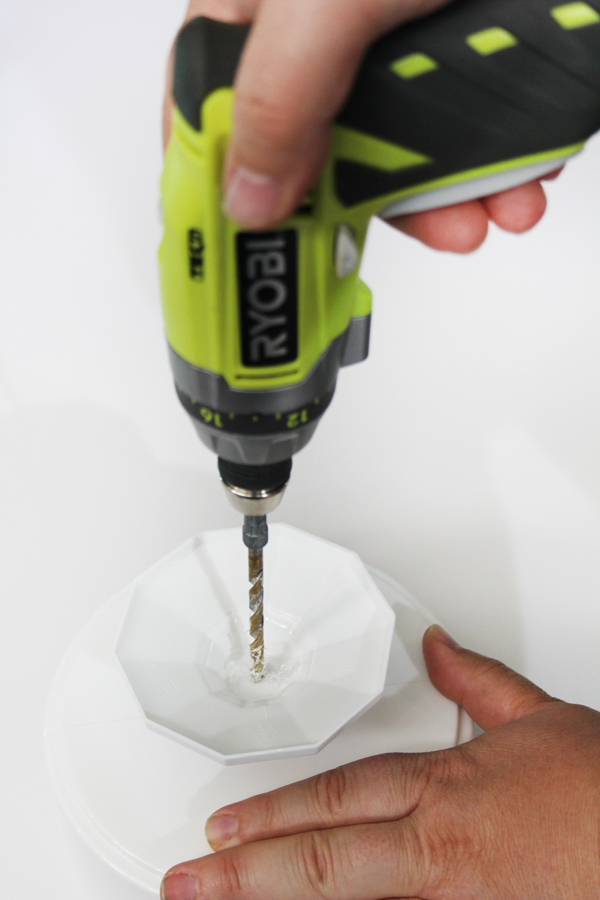 We placed the screw through the bottom of the first small trifle container, then flipped it over and used two hex nuts as spacers before screwing the knob in place. 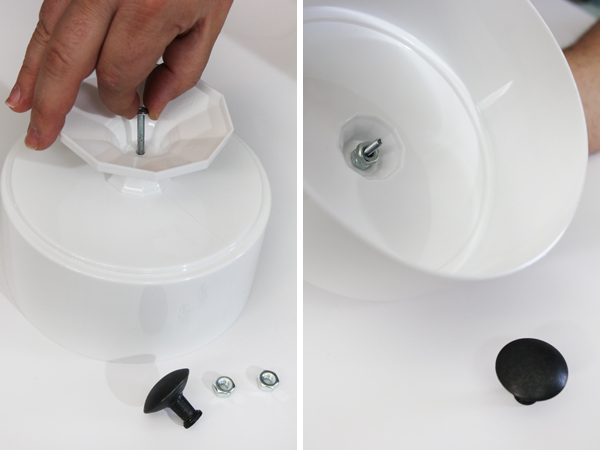 Adding those hex nut spacers provides just the right amount of room to wrap your fingers around the knob. 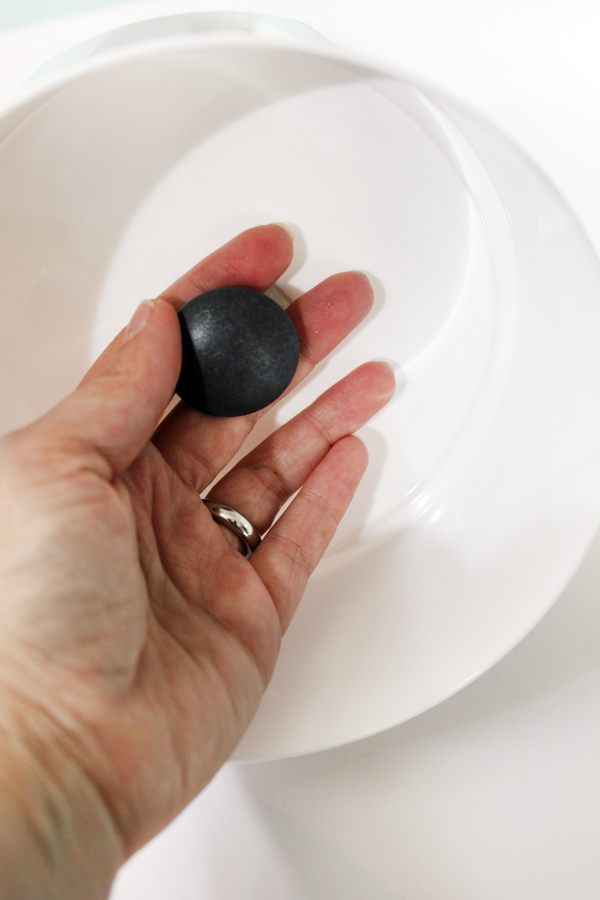 Once we’d created a way for Beckett to hold onto his Lumiere candle hands, we needed to actually make them look like candles.
I picked up some LED tealights from IKEA, but I needed a flat surface to attach them to. Since the bases of the trifle containers are concave, I used foam core poster board to create a flush bottom. 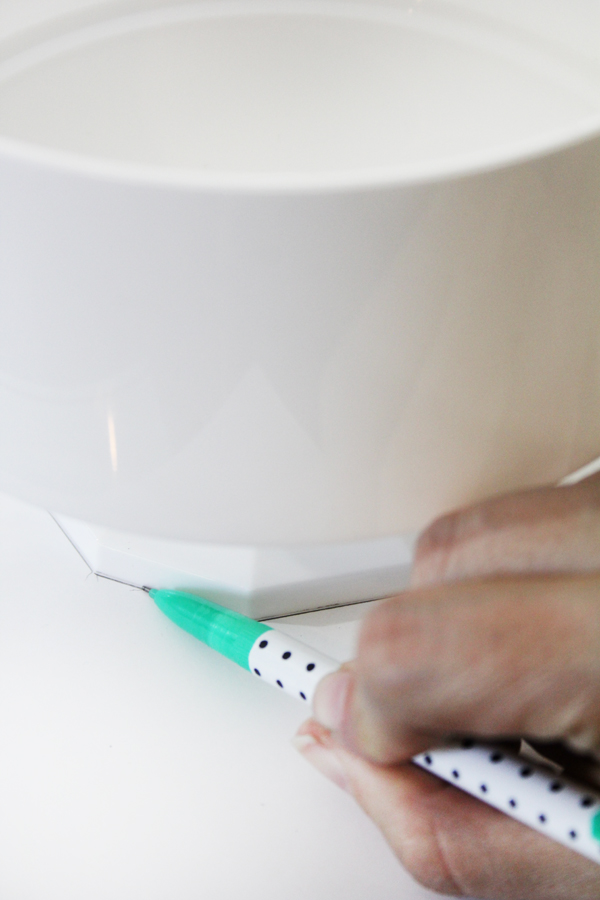 I traced the bottom of each container on the foam core board and used an exacto knife to cut it out just a bit smaller than the pencil line. Then I added a bead of hot glue around the inside edge of each trifle container base to glue the foam core decagons in place.

To complete the look of Lumiere’s candelabra, I added a strip of shimmery gold ribbon around each trifle container. 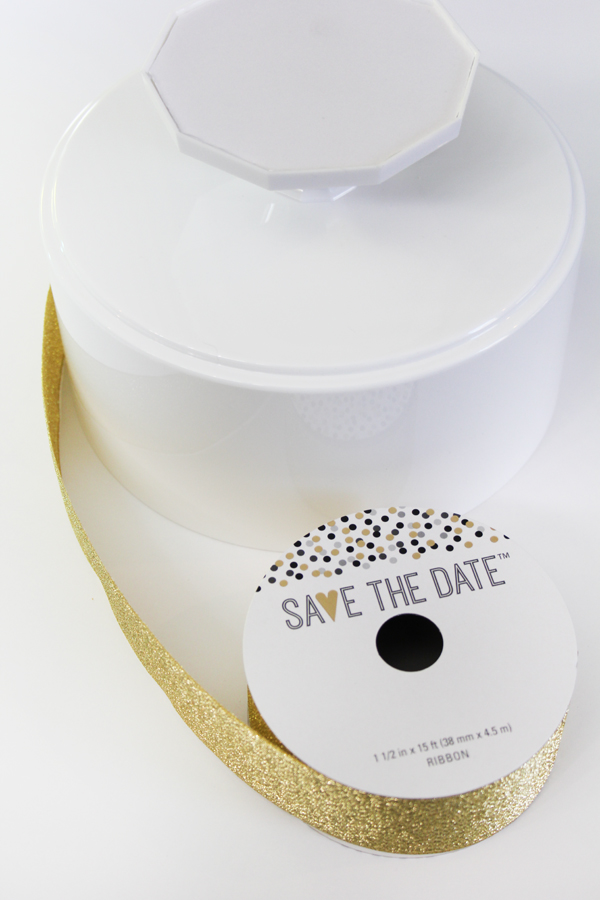 I cut the ribbon to the right length and used a couple of dabs of hot glue to hold it in place. 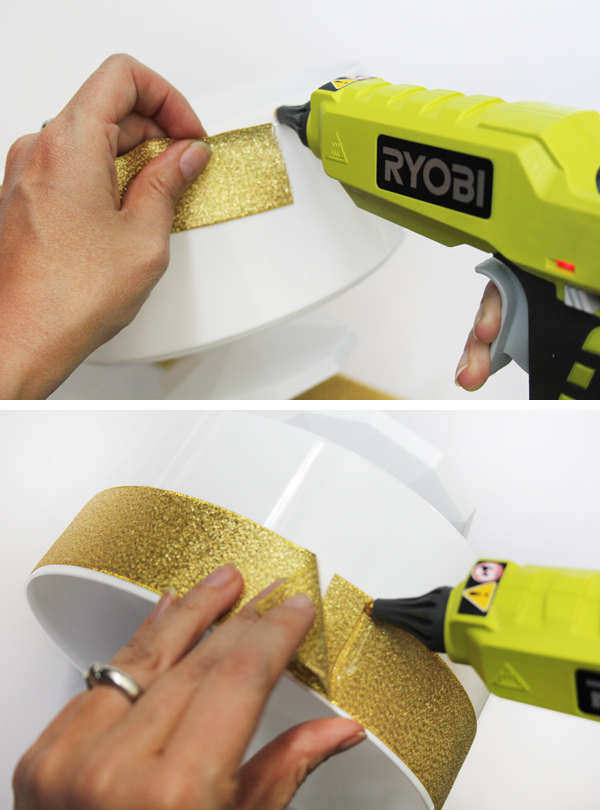 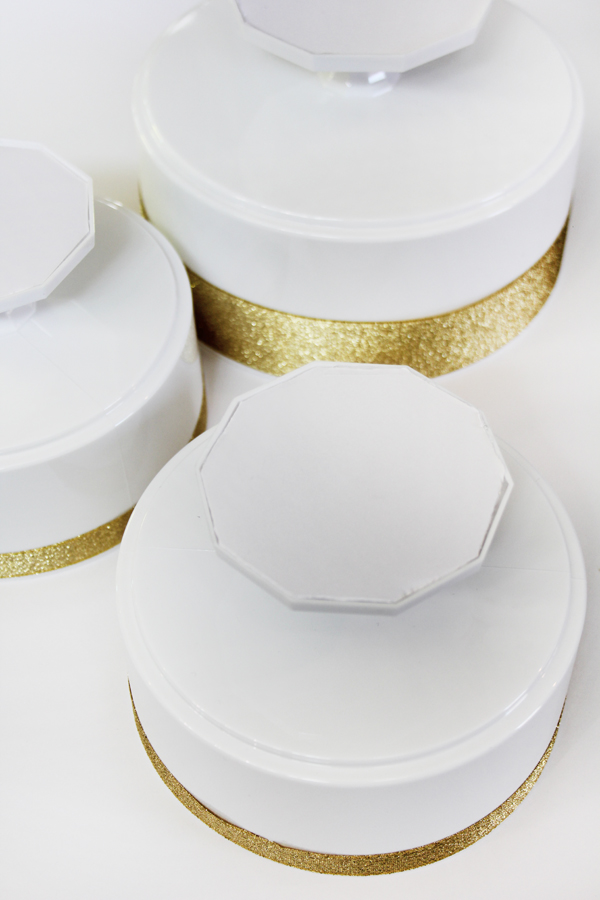 I decided to affix the candles with velcro-like Command picture hanging strips because I wanted the tealights to be removable so they could be easily turned on and off, and the batteries could be replaced if needed. 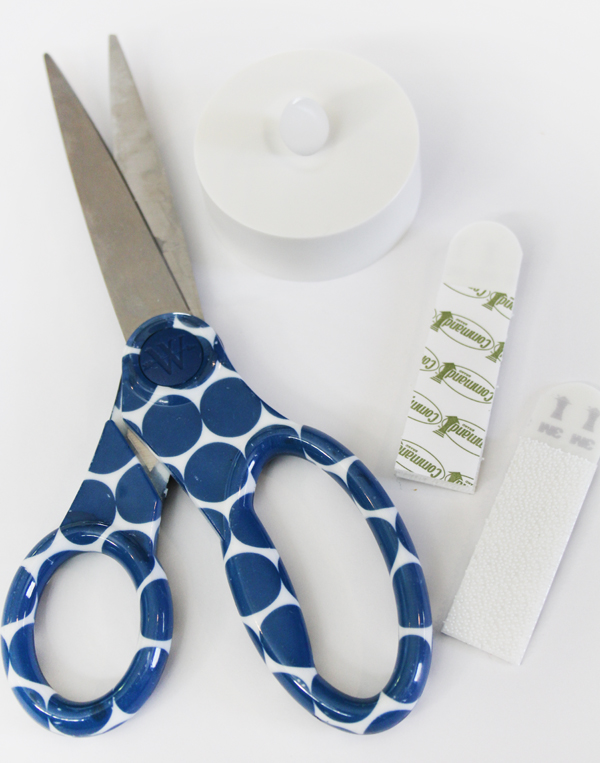 I trimmed the picture hanging strips down to small pieces and placed them around the bottom edges of the tealights, leaving the battery compartments accessible. I then peeled off the backing from the other side of the hook and loop strips and attached them to the center of the foam core on the bottom {now top} of each trifle container. 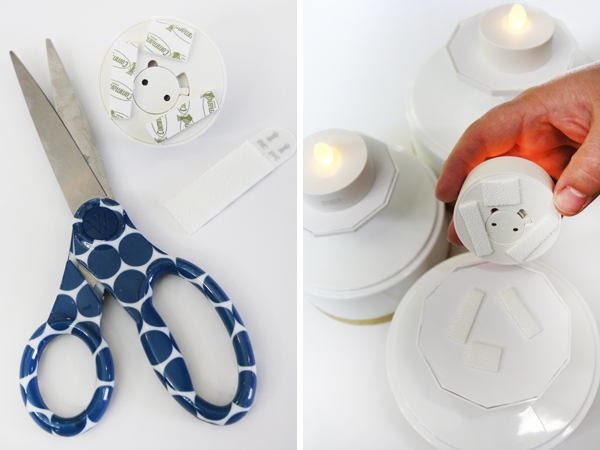 For Beckett’s Halloween costume, it would have been fine to turn the tealights on and leave them on for the duration of the evening. However, if you are making a Lumiere costume to be worn on stage for a performance of Beauty and the Beast, you ideally want to control the LED candle flames without un-velcro’ing the candles to turn them on and off each time.
I used Stopen tealights from IKEA, which are perfect because they are motion-contolled and turn on and off simply by tipping them down and back up, allowing Lumiere to control his candle flames with nothing more than a gesture. The Stopen lights appear to be discontinued and have been replaced with the Mognad battery operated tealights. I haven’t been able to confirm if these lights turn on and off in the same manner.
I tried the hat-sized trifle container on Beckett, and added a piece of gold glitter elastic with hot glue to create a chin strap to hold it on his head.
Even with the elastic, however, I found that the candle hat slid around on his head and tipped from side to side. To solve this problem, I added some dense foam to the inside of the hat. 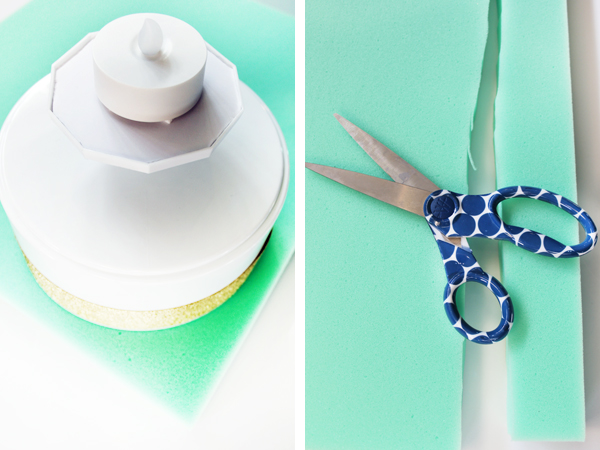 I cut a strip from a sheet of 2″ thick foam and glued it around the inside of the large trifle container. This not only made the candle hat fit Beckett’s head better and stopped it from sliding around, the soft foam also made it more comfortable for him to wear. 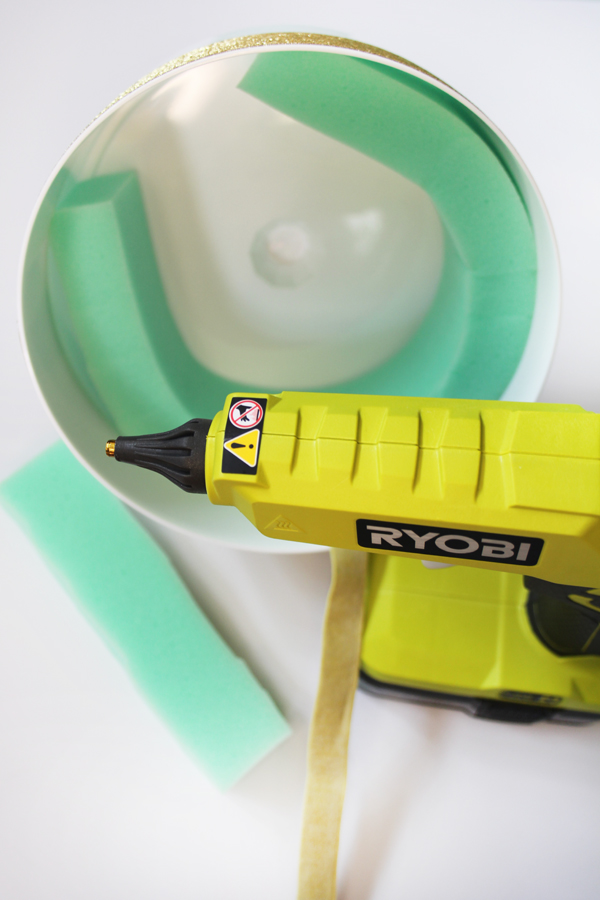 With the three pieces of Lumiere’s DIY candelabra complete, I just needed to find something for Beckett to wear. I found a great price on a small, white tuxedo with gold trim and a gold vest that was the perfect compliment to the white and gold candle hands and hat. 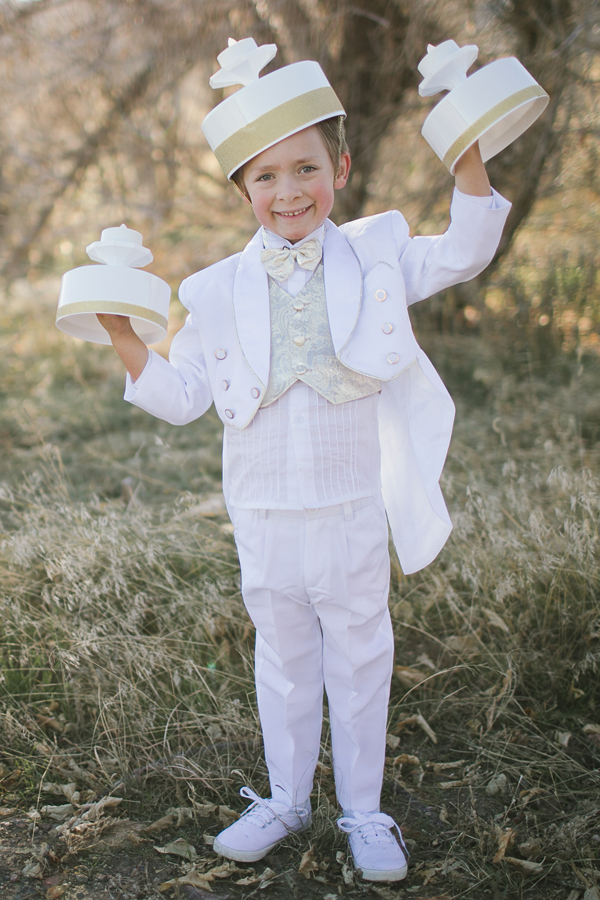 My kids have always been small for their ages, so I got lucky that at almost 6 years old, Beckett was able to fit into a size 4T tux, because a larger size would have certainly cost more, but there are still some good deals to be found if you search for white costume tuxedos. We paired the tux with some cheap white canvas shoes. 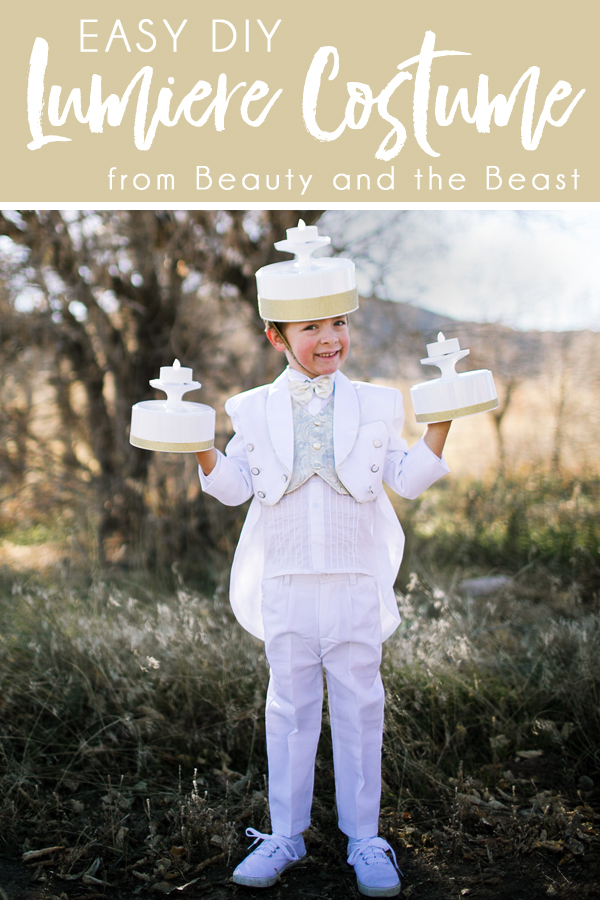 How cute are my Lumiere and Gaston? Beckett loves to be fancy and he was so thrilled with how his costume turned out, and Cooper was pretty pleased with his muscles! 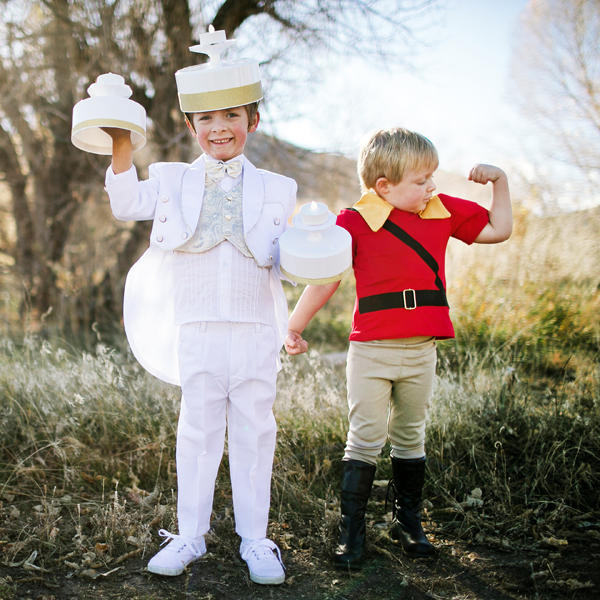 I just can’t get enough of these two and how their costume choices so perfectly captured their personalities. 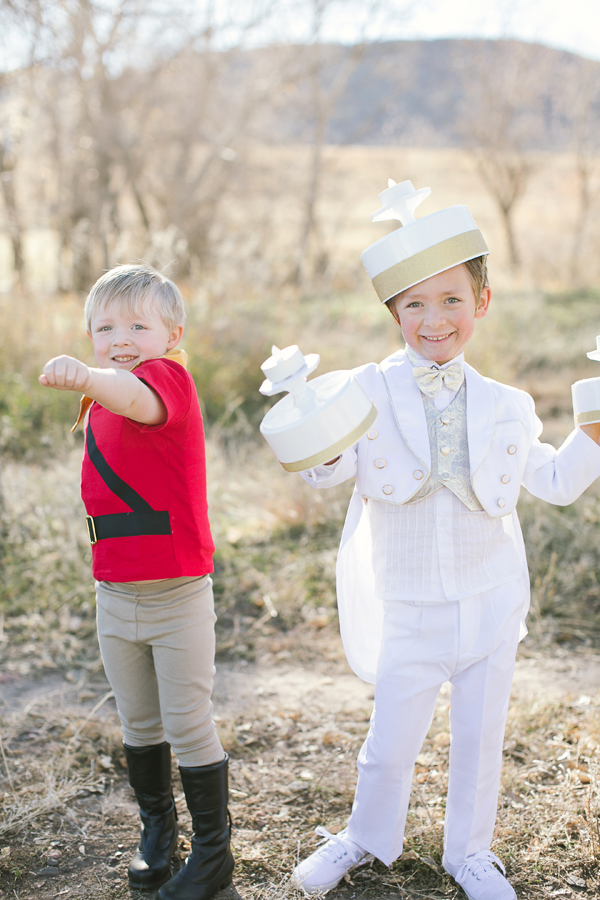 The boys really wanted this to be a whole family costume, so Scott and I bought inexpensive Belle and Beast costumes. 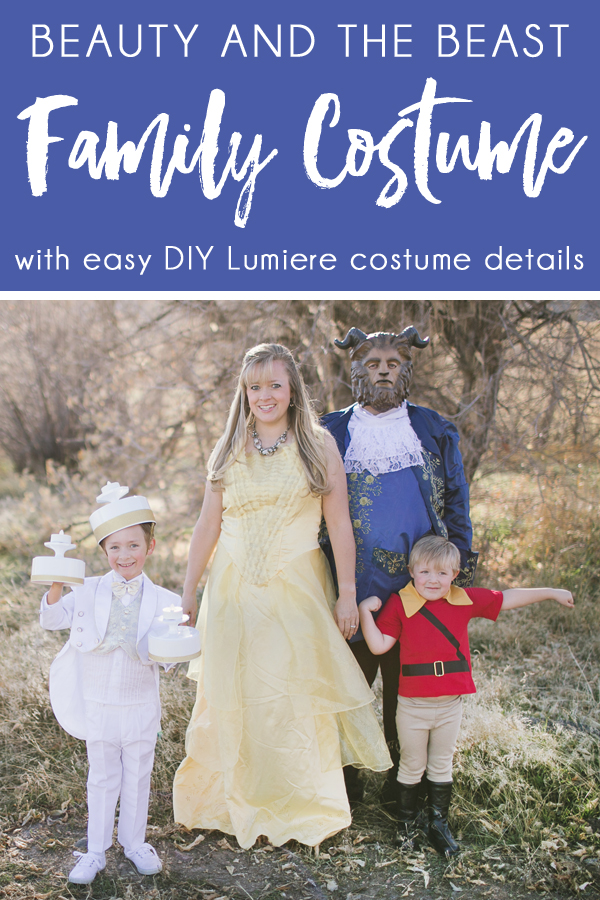