A while back I received a call from a college friend asking for help giving her master bedroom a new, more sophisticated look. You can read the full back story in last week’s post, where you’ll find all of the before pictures of the room as well as some gorgeous inspiration photos that the couple found on Houzz to show me the style they were after.
Today, I’m going to show you the design plans and alternatives I came up with, and talk through the design process a bit. Then next week, I’ll share the final photos of the completed room! 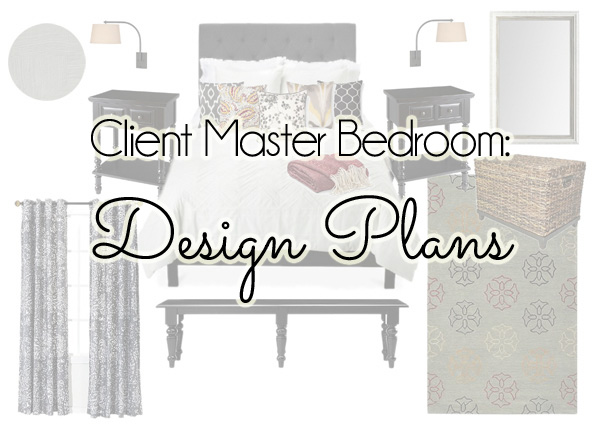 Let’s start with a look back at two of the before photos of the room so that I can talk about the some of the goals and challenges the I tried to address in my design plans. 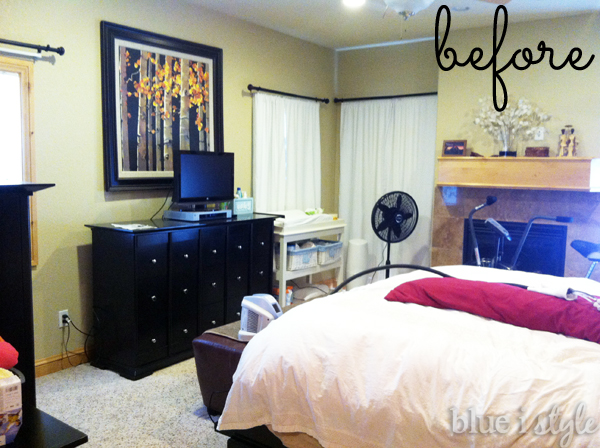 WHAT STAYS & WHAT GOES: When I first met with the couple to talk about potentially redesigning the space, we started by discussing which items they needed or wanted to stay in the room, and which items they wanted to, or were open to replacing. Here’s the initial list we came up with:
GOALS & CHALLENGES: Fortunately, the couple had similar ideas for the room. They both wanted a cleaner, more sophisticated look, and wanted to keep the space in a neutral color palette with a few limited pops of color. Looking over my notes from our initial meeting, I identified the following goals and challenges that I needed to address in my design plans
RUG SHOPPING: Since the homeowners wanted to keep the bedding very neutral, I began by shopping for a rug that would set the color palette for the room. I went in search of a rug that would allow us to tie together the cool shades of grey that the homeowners desired, with the still tying in the yellow-tone of the wood mantle, and the golden brown of the fireplace tile surround. I found two rugs from Home Decorators Collection that were up to the challenge. 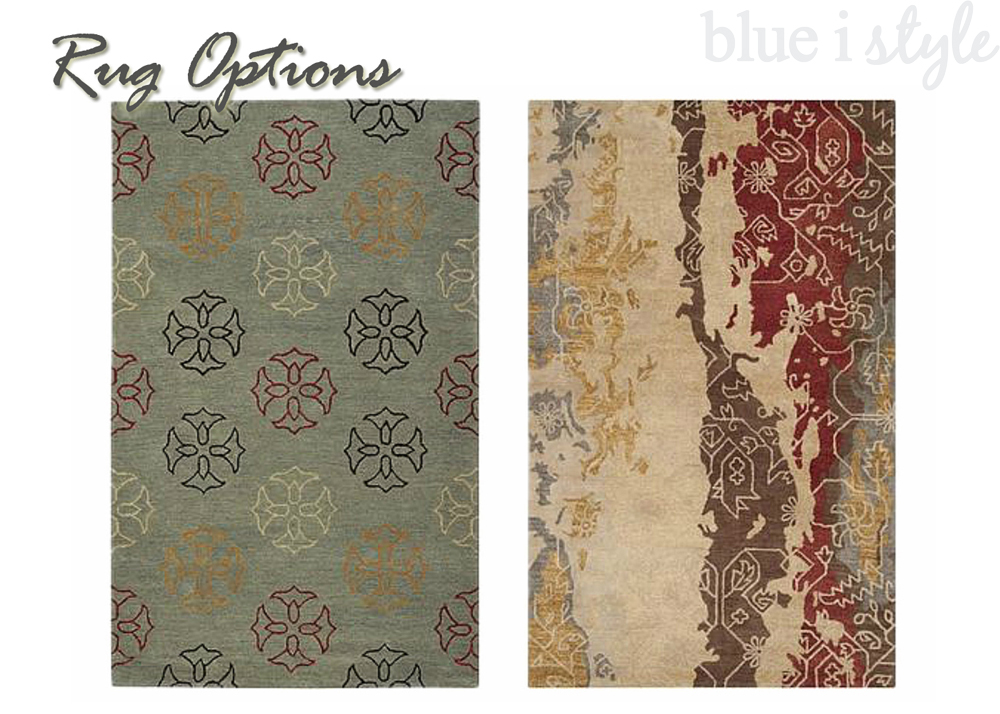 The first rug option I presented to the homeowners – the one of the left – had a soft grey background {though I have discovered that it reads a bit green on some computer screens – so if it looks that way on your screen, take my word for it}. This rug as a sophisticated pattern that ties all of the other colors I had discussed with the homeowners – yellow/gold to tie in the wood and tile colors, red to bring back in the color from of the lamps the homeowners liked, black to tie in all of the black furniture, and a creamy-white to tie in with the home owners’ desire for crisp white bedding. This rug was my favorite, and the one I felt best fit the style the homeowners were after.
The second rug option had a more predominantly beige background, but with bits of grey, brown, gold, and red. The pattern of the second rug was less traditional, and I knew would challenge the homeowners more, and it was also considerably more expensive – so it was a clear second choice, but one that I knew would also look great in the room.
THE DESIGN PLANS: With these two rugs as my starting point, I put together design boards that I presented to the couple. Common across all three plans was a proposed soft grey color for the walls, a new black bench for the end of the bed {from Home Decorators Collection}, and the dark grey tufted headboard that we would relocate from the homeowners’ guest room. 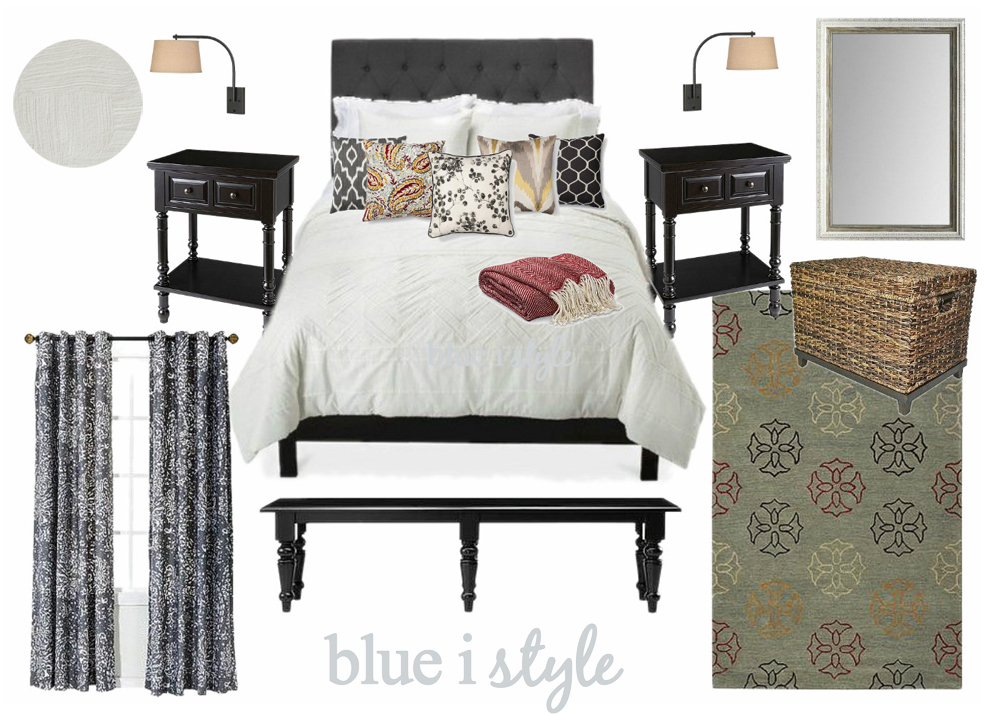 The second plan I presented to the homeowners illustrated the room with the same bedding and pillows, but with the other rug, and with different nightstands, sconces and drapery panels. I emphasized to them that the various elements of the room could be mix and matched to create the combination that worked best for them. 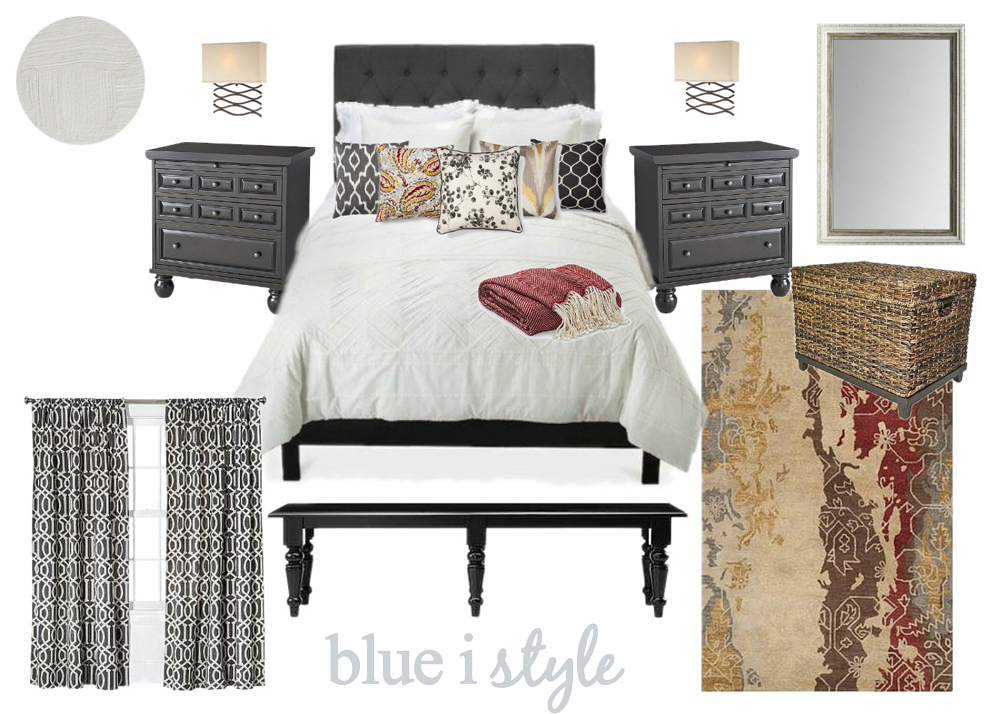 The homeowners loved the red lamps that were originally in their bedroom, but the lamps were just too big for the nightstands, or even for the dresser. Since the lamps were the only red in the room, there was nothing that required us to keep red in the design plan. To help the couple decide whether they wanted to add some red back into the room, as we had discussed, or whether they wanted to go even more neutral, I showed them an alternative plan very similar to the first two, but without any red in the pillows/blanket. In this final plan, I also illustrated a third option for the sconces and the drapery panels.

Since I knew the couples’ fondness for solid, light colored bedding, but also wanted to take the style up a notch over their existing white duvet, I proposed a cream comforter from the Nate Berkus line at Target with a subtle chevron texture. To keep the room neutral but not boring, I created a grouping of predominantly grey and white pillows {all from Target}, with yellow/gold and red in small doses. Like in the rug, the touches of yellow/gold in the pillows would once again help to tie in the yellow tone of the wood on the mantel, window trim and baseboards. 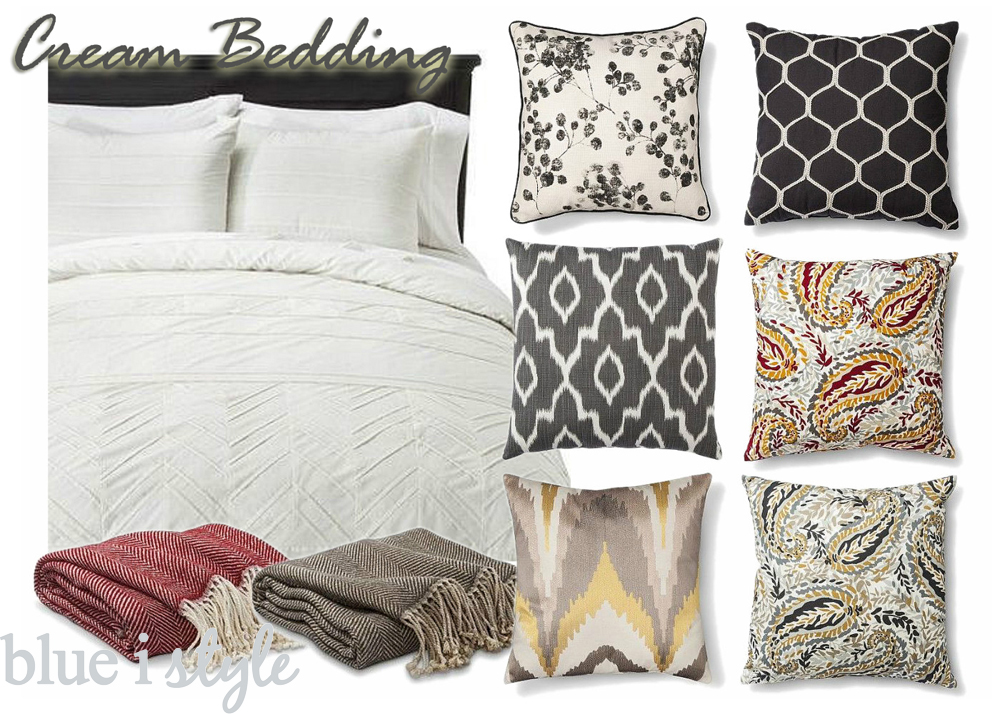 As I mentioned before, the wife felt strongly about wanting to paint the walls grey, but the husband was less certain. I wanted to present them with an alternative way to incorporate grey into the space if they decided to leave the walls beige, so I showed them a grey bedspread option that would still coordinate with all of the same pillows {without without the pops of red}. 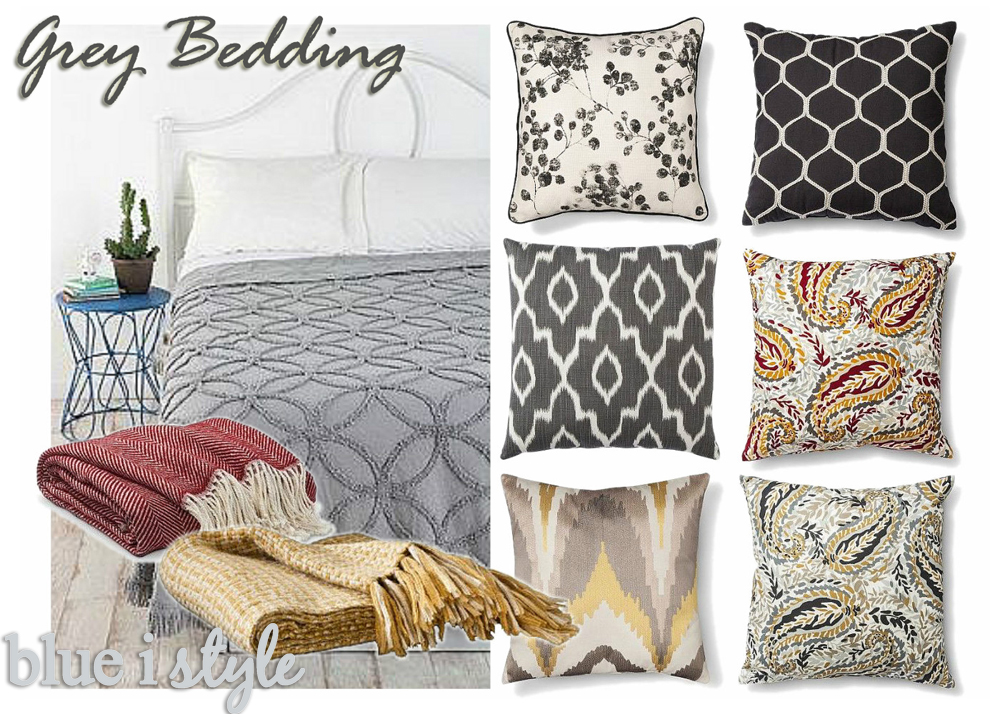 The couples’ existing nightstands were too tall and narrow, so we needed to find replacements that would coordinate well with their existing black furniture. I identified two different options at Pier 1 Imports that both featured similar drawer styles to the dresser and chest of drawers in the room. I also proposed three sconce options of varying styles to help gauge the couples’ lighting style preferences. 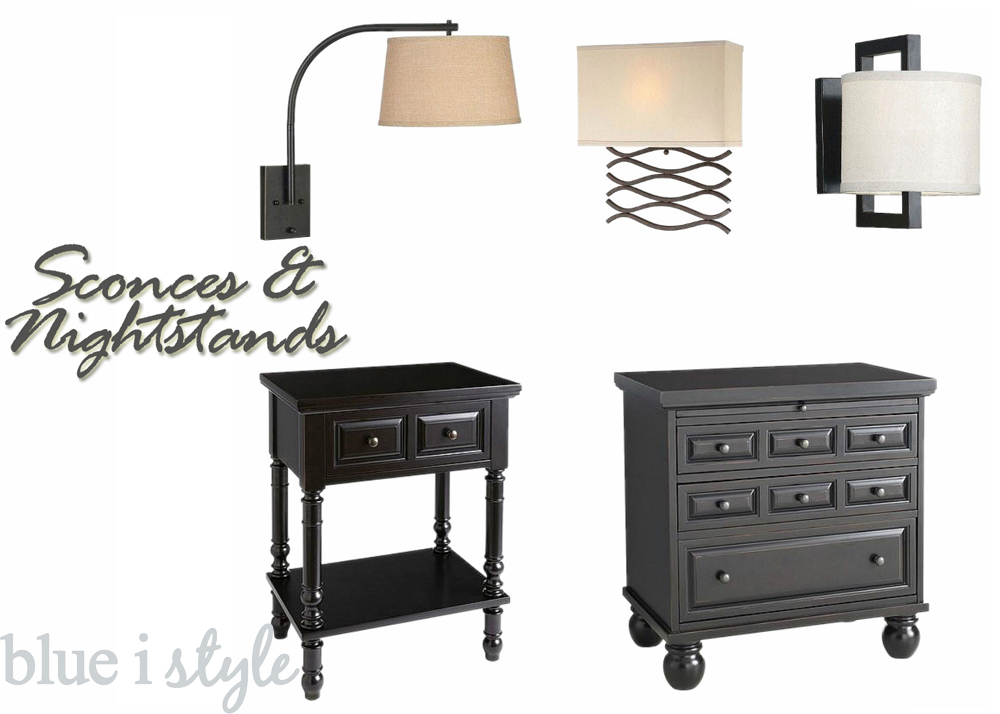 The couple liked the function of the bench at the end of their bed, but because it was solid all the way to the ground, it was very visually heavy in the space. The existing bench was also extra deep, causing it to crowd the walkway between the bench and the dresser. As a replacement, I found a bench at black bench from Home Decorator’s Collection that was a good match to the other furniture in the space, and that came in an extra long length perfect for the foot of a king bed. ,Best of all, the narrow legs and open base of the bench would take up much less visual space in the room, but the additional pair of legs in the center made the bench extra sturdy {as requested by the couple}. 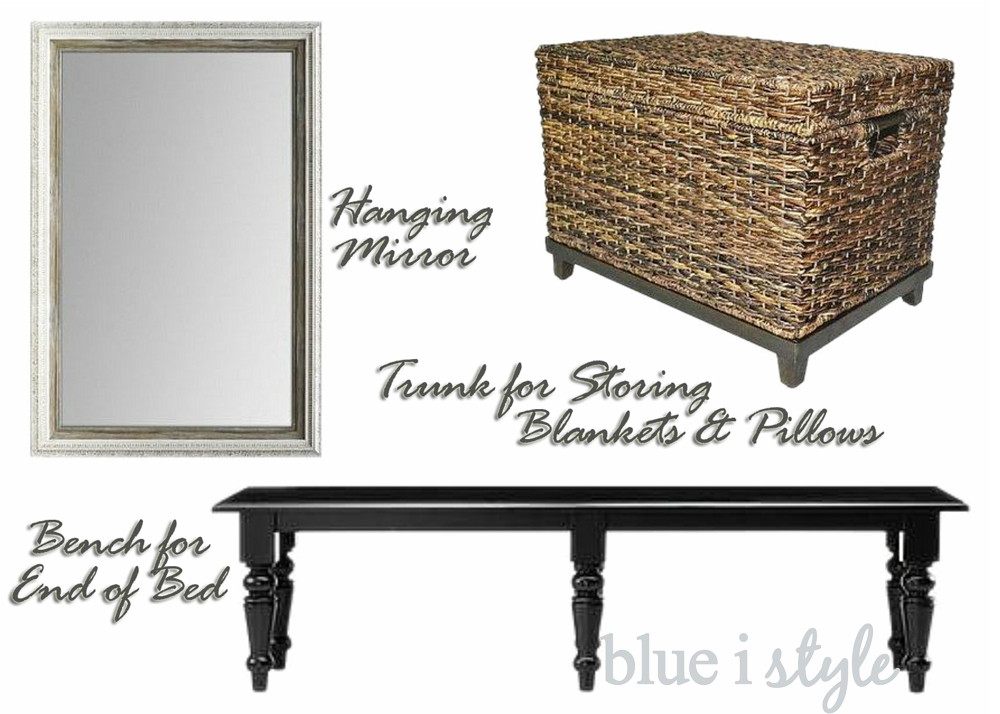 I know that men are often less keen than women on a bed full of pillows – so to address this issue, I found a lovely wicker trunk that would provide a perfect space for storing pillows at night (keeping them off of the floor and away from the dogs}. I also identified a grey, white and weathered wood framed mirror that I thought would be perfect hanging in the arched art nook at the entry to the master bedroom.
I proposed three different drapery panel options – each in the same grey and white color palette, but with different types of patterns. The couple asked that I push them a bit on the drapes, and I think that the paisley and floral patterns definitely did stretch their comfort level. But by illustrating a different set of drapes in each of the three design boards, they were able to see that when viewed in the context of the whole room, each drapery option blended nicely with the other patterns and textures in the space. The paisley and floral pattern also had the added bonus of further tying in that yellow/gold color that I wanted to add throughout the space to make sense of the color of the wood in the room. 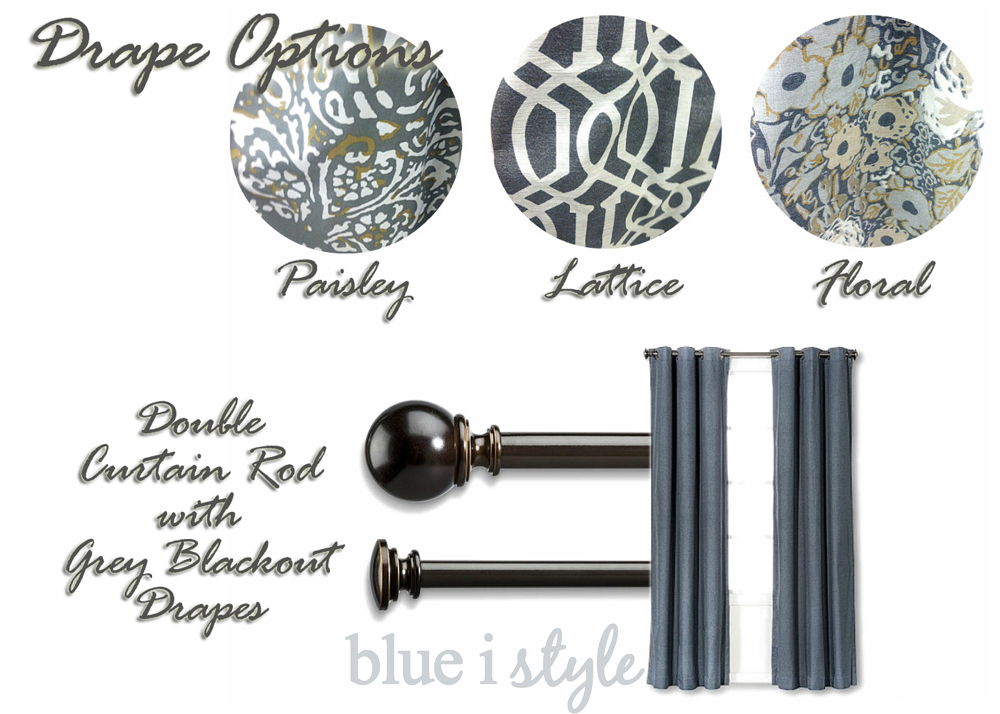 In the couples’ existing room, they had very few accessories, so we discussed the importance of adding this final layer to the room to give it the finished and sophisticated feel they were seeking. To help them visualize what this final layer might look like, I pulled together a design board with a handful of accessories in the style I proposed for their space. I suggested mixing styles and textures to give the accessories a collected feel. 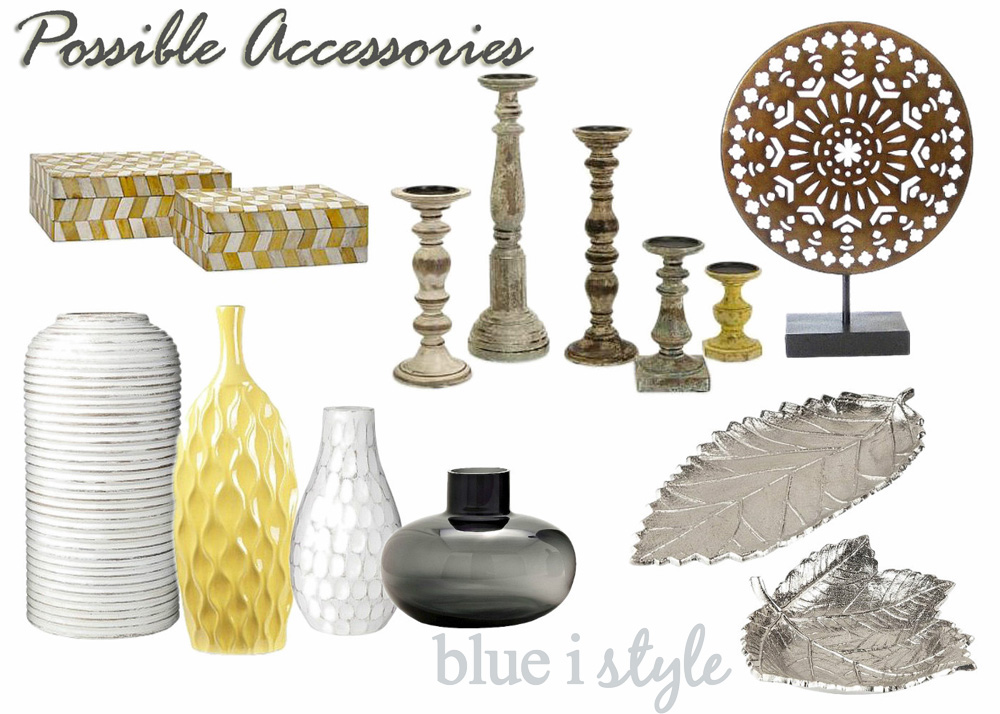 As we were in the process of shopping for the accessories and final details to complete the room, the home owners accepted a job opportunity in another state, meaning that they would be putting the house on the market just about the time we finished the redesign. As a result, we adjusted some of our design decisions based on how to best stage the room for a quick sale, while still keeping in mind that the couple would be taking everything with them to their new home.
Come back next week to see the photos of the completed room!