When I was in law school rushing home from my contracts class everyday so I wouldn’t miss an episode of Trading Spaces, I could have never imagined that one day I’d see photos of me and my home spread across two pages of Better Homes & Gardens. Talk about a “pinch me” moment!! 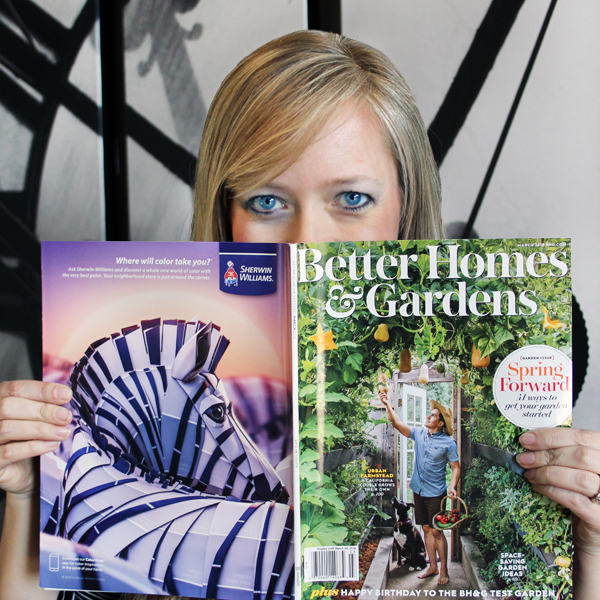 Last week, Blue i Style celebrated its fifth anniversary. When I started this blogging adventure, I was still practicing law full time, Beckett was only 14 month old, and I was 6 months pregnant with Cooper. Starting a blog at that moment in my life didn’t really make sense, but once the idea was in my mind, I just had to go for it. I had no idea how many amazing opportunities would come from that decision, and I’ve loved every minute of it!

Seeing my work in print for the first time last summer – in Denver’s 5280 Home – was a major milestone for me. But I still dreamed of being published in a national magazine. Then in October, I got THE EMAIL.
It was a busy morning getting the kids ready for school and I was multi-tasking, checking my email as I walked down the stairs to the kitchen to pack lunches. Consider this a PSA… you should NOT check email while walking down stairs. I saw a new email pop up in my inbox from Kit Selzer, a senior editor at Better Homes & Gardens… and I nearly missed a step!
After I recovered my balance, I stopped right there to read the full email – because of course I couldn’t wait another 8 steps to find out what it said.
My garage… they’d seen the pictures of my organized and colorful garage makeover… 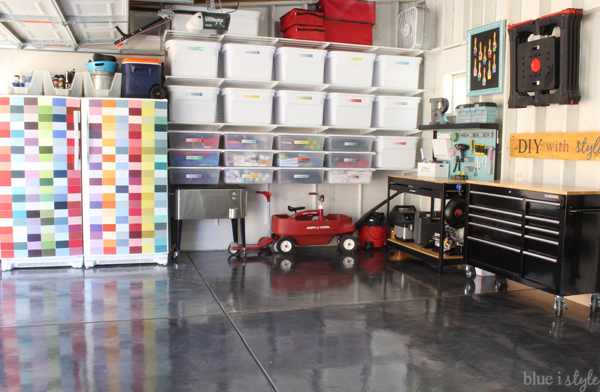 I kept reading… “We love what you did and would like to feature you and your garage in our I Did It section in an upcoming issue. Unlike our usual I Did It stories where we focus on a single DIY project, we’d like to photograph, well, just about everything in your garage!  …  And here’s the tricky part: Could we send a photo crew soon to your house for a photo shoot?”
A Better Homes & Gardens photo shoot at my house?! I wanted to respond with “Um…Yes, Please!” But I decided I should sound a little more professional, so I told Kit I’d welcome their crew anytime that fit their calendar.
Then I did what any good organizing blogger would do… I started making a to do list:
Prep the garage. Clean the whole house. Shop for clothes.
You’d think with Better Homes & Gardens coming, I’d have been most nervous about getting the house ready, but it was actually the clothing situation that I was most worried about.
BHG was flying in a stylist for the shoot, and I needed to send her photos of some clothing options in advance. Since I was going to be in the garage, they didn’t want me to look too dressed up, but they also didn’t want me to look like I was dressed to work in the garage. She told me to think of what I’d wear for brunch with my girlfriends on the weekend when I wanted to look super cute without looking like I’d tried too hard to look super cute.
The problem was that I had just lost about 45 pounds and I literally had one pair of jeans that only sort of fit (by which I mean, baggy in all the wrong places) and closet full of too big shirts. Two days before the photo shoot I was still frantically shopping. I had my heart set on wearing blue, since it’s the color I’m most comfortable in, and as the clock was ticking down, I finally found a shirt I loved. Thank goodness the stylist liked it too, and she also approved of my new black/blue jeans, so she wasn’t forced to do any last minute shopping for me. 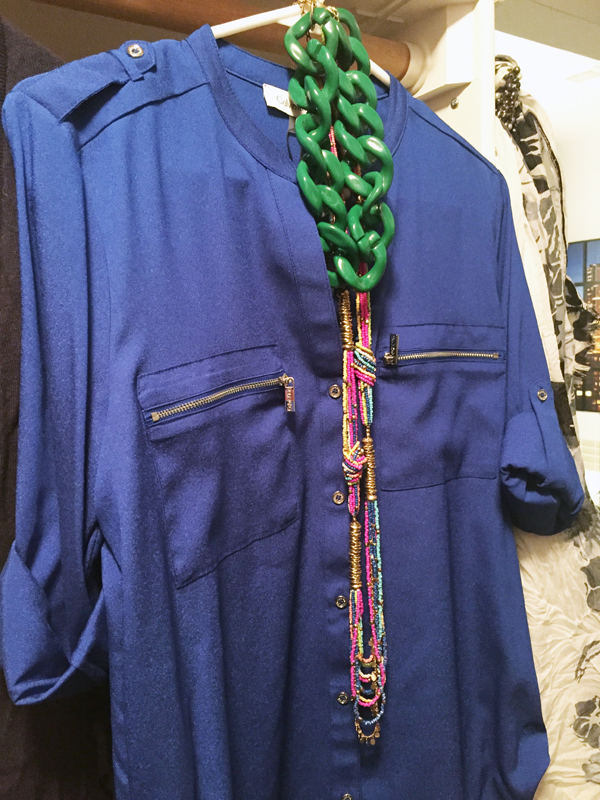 The day before the shoot, the photographer, David, and stylist, Lindsay, stopped by to make a plan for the big day. I’ve had lots of blogger friends featured in magazines, so I’ve heard their behind the scenes stories and knew that stylists typically do a lot of rearranging. They bring in lots of new accessories, fill the space with fresh flowers, and shift everything around a million times until it looks just right on camera. But I wasn’t sure what to expect since we were shooting in such a non-traditional space. 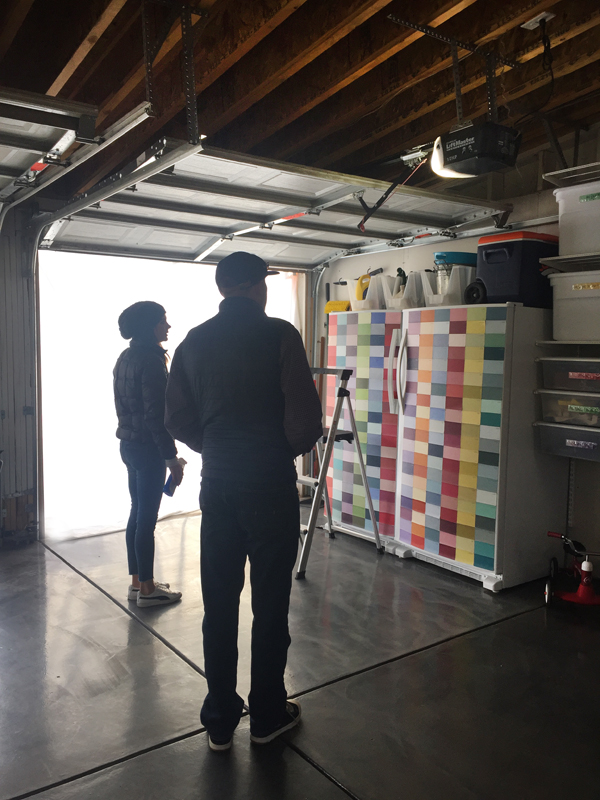 After taking a look around and consulting the notes from the BHG editors, Lindsay let me know that she’d leave most things just they way I had them because they wanted it to look like a real working garage. That was a big relief, because for me it’s always so important to show real life, functional spaces that just happen to also be beautiful.
When they arrived the next morning, David and his assistant, Derek, got busy setting up and they attached a large sheet over one of the garage doors to filter the light. Photographing in a detached garage that opens onto an alley doesn’t make for the most glamorous of conditions. (Not to mention that it was trash day, so three separate trucks would be coming through the alley to collect garbage, recylcing, and compost throughout the morning, requiring that some of the photographers equipment be moved each time). 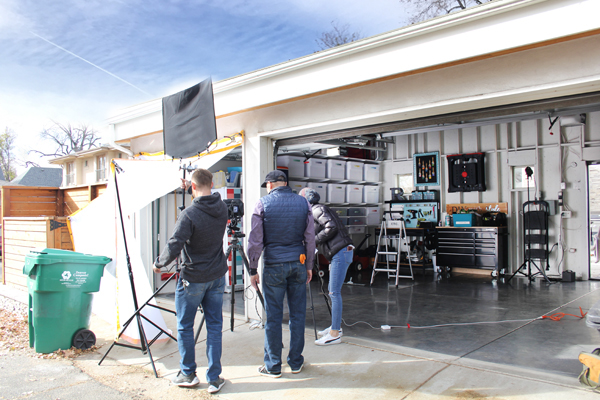 They started by taking some wide shots of the garage. 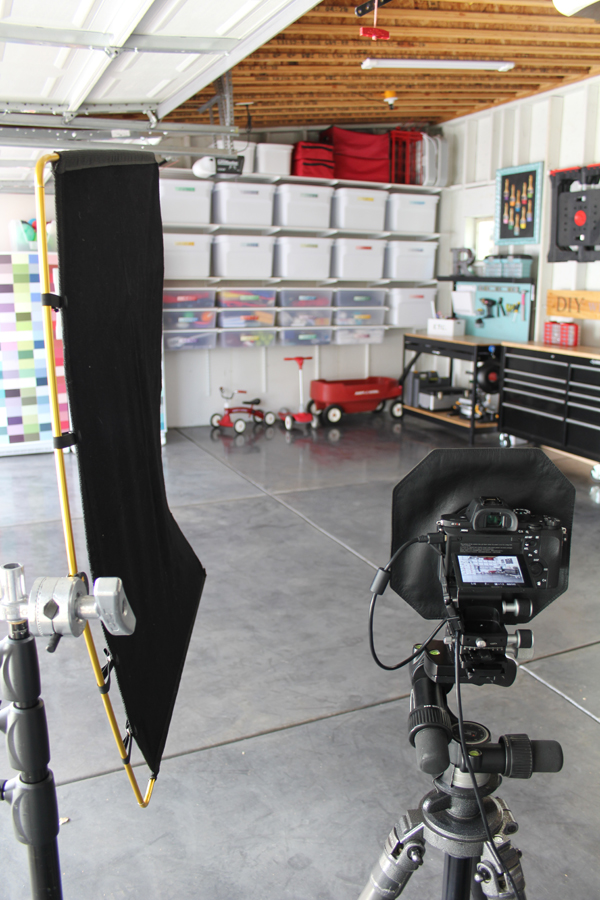 There was lots of shifting and tweaking to get everything positioned just right. 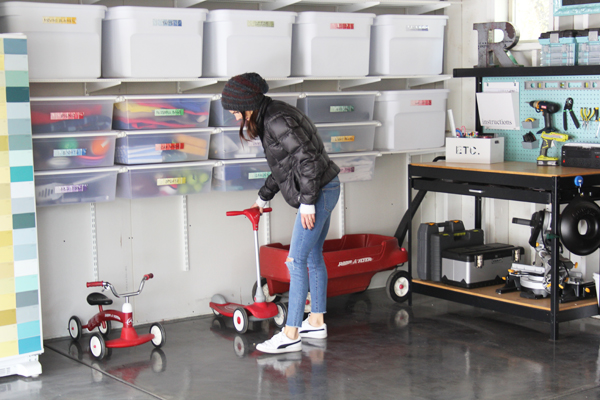 Then they moved on to taking closer-up shots – first the brooms and shovels, then the fridge and freezer, the hanging drawers, the workbench, and even the bike pulley system in the other corner of the garage. 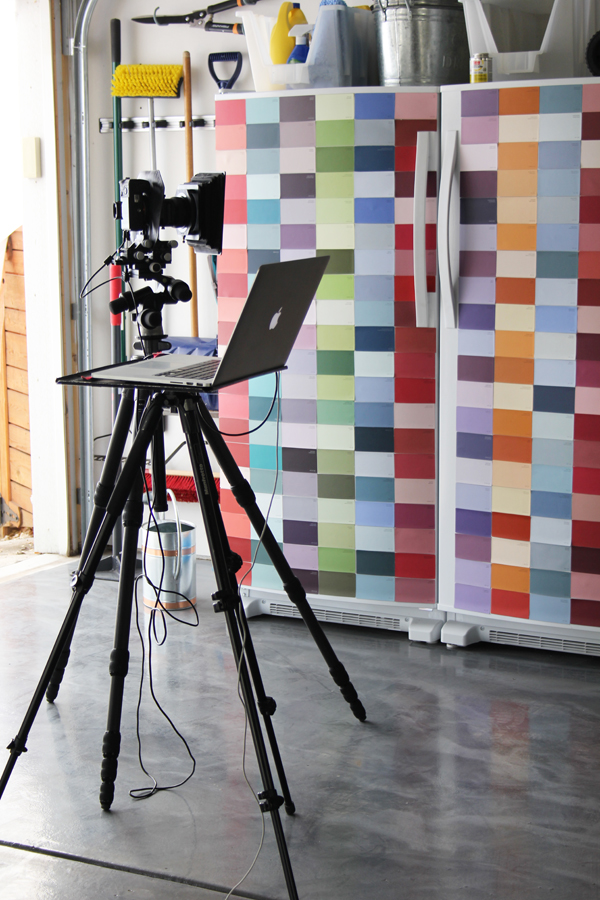 Scott worked his butt off helping me create this beautifully organized garage, so I was really glad he was able to take the morning off to experience some of the photo shoot with me, and that he thought to grab our camera to capture these fun behind the scenes photos! 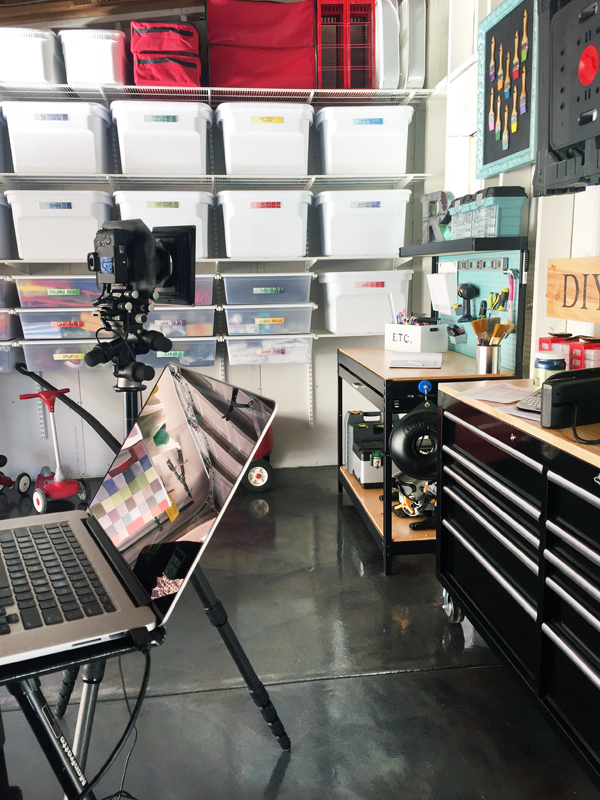 The metallic floor finish sure looks good in photos, but with the garage doors open, it also seemed to have a constant layer of dust on it. Fortunately, everyone thought my spray mop was fun, and became a running joke throughout the day because the Lindsay and Derek were fighting over who got to take the next turn cleaning the floor for each shot. 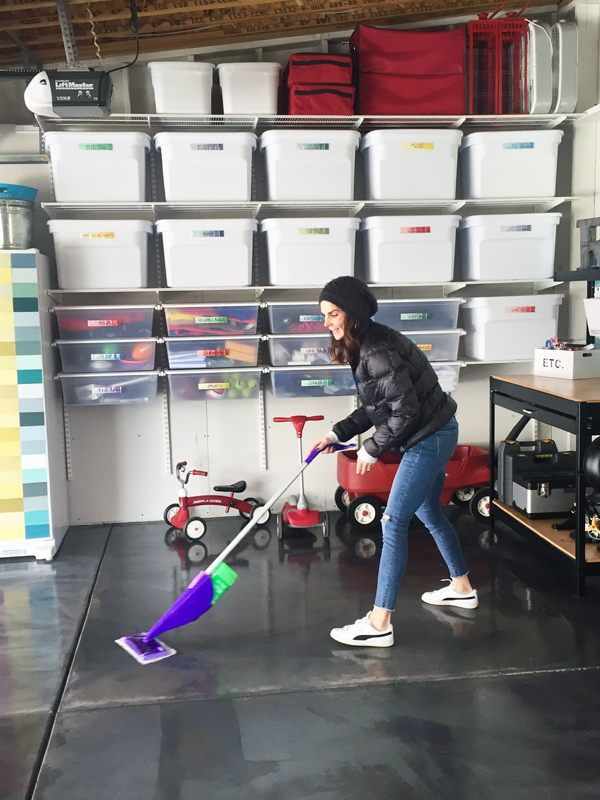 Finally, it was time for my photo. I got changed and brought a bunch of jewelry options out to the garage so we could see what worked best. 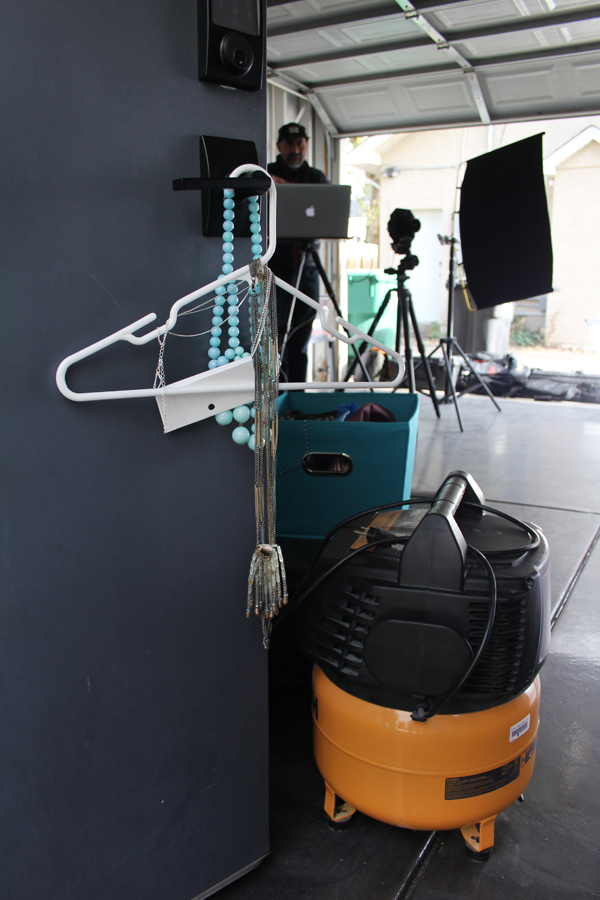 I’m so short that my jeans are always too long, and I never quite know what to do with them. I feel like I’m not cool enough to pull of the rolled up look, but the alternative is bunchy at the knees. Thank goodness for Lindsay being there to make me look good. 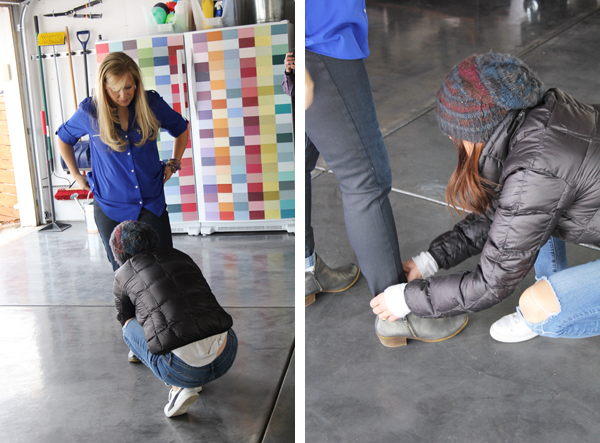 As a blogger, I’ve gotten pretty used to the neighbors thinking I’m a bit crazy (spray painting hangers on the front lawn, taking photos of myself locking and unlocking the front door over and over, and always having porch decorations two seasons ahead, just to name a few reasons). But a magazine-scale photo shoot in the garage really takes it to the next level.
I got a more than a few strange looks from people walking their dogs as I posed by my paint-chip covered fridge and freezer with a photographer taking my photo, and Scott taking photos of the photographer taking photos of me. We were quite the spectacle! 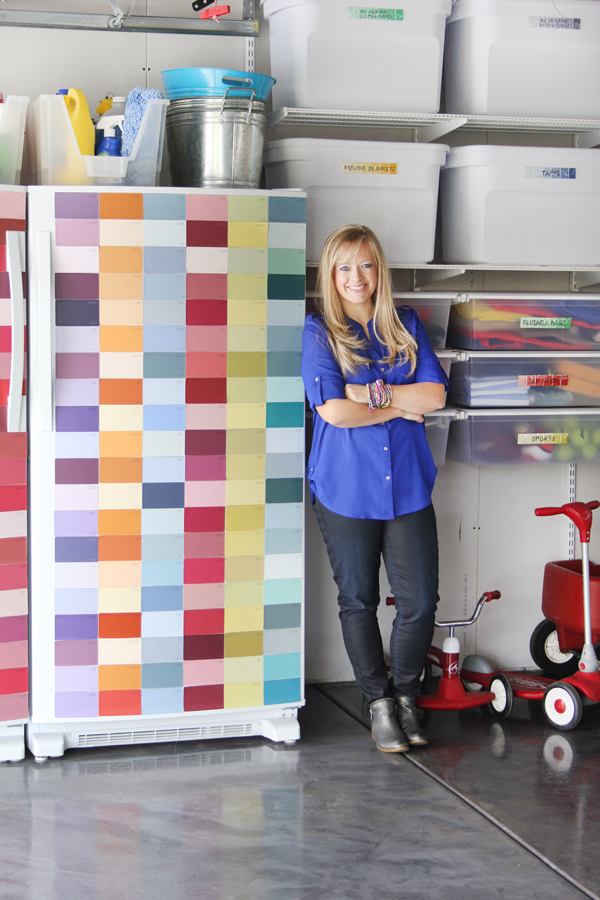 Notice how well my silver booties match the metallic garage floor. That became an issue of much debate. When we sent the first set of photos back to the editors for approval, they couldn’t decide if they loved or hated that they matched, so we ended up taking a second full set of photos with alternate black booties. 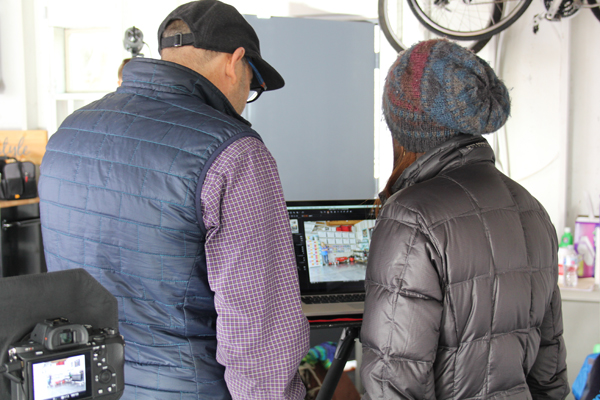 In the end, they said they liked the silver best… but I guess they changed their minds, because in the magazine, I’m wearing the black.
As the day went on the day, the stylist and photographer spent quite a bit of time sending each set of photos back to the editors and then having conference calls to discuss and get approval. Every detail matters when you’re photographing for print! 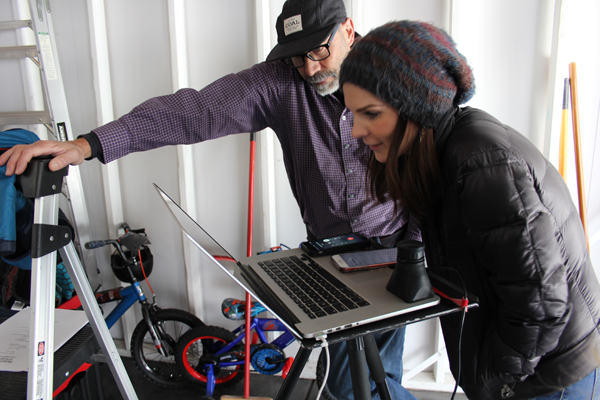 The photo shoot lasted until late afternoon, and I had so much fun hanging out with this talented group! They made it an experience I’ll never forget with lots of laughter along the way! 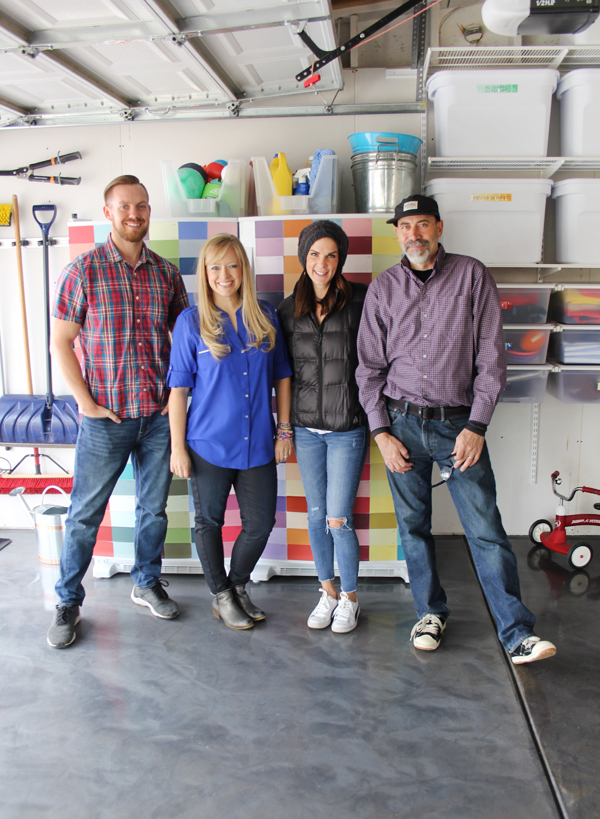 Then, just as David and Derek were starting to pack up their photo equipment, one more request came in. The editors wanted a close-up of our Rocksolid metallic floor finish. I’m sure photographers get a lot of odd requests, but based on the look on David’s face, I think photographing a close-up of my garage floor was right up there! 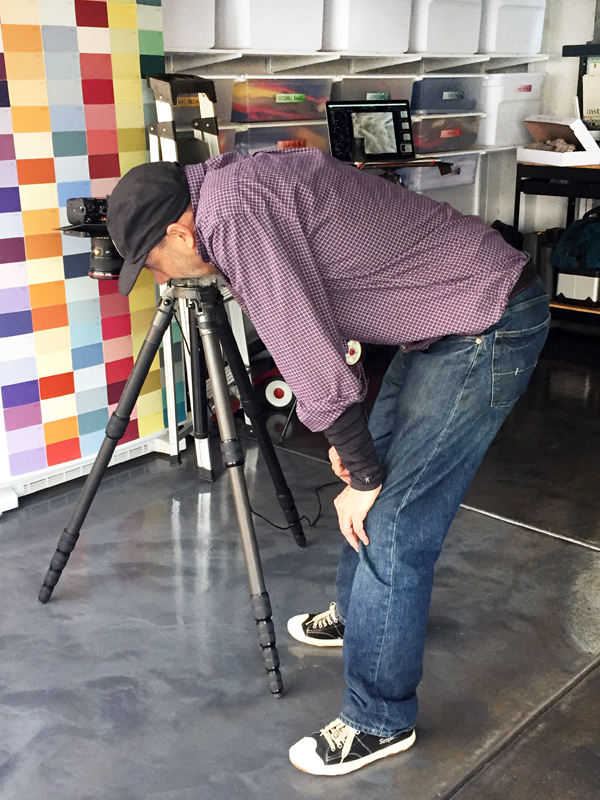 I got to see lots of sneak-peaks at the photos during the shoot, but it was a long three months waiting to finally see it all in print. Then one afternoon in mid-February, emails and Facebook messages started rolling in from friends and strangers alike, and I knew that the March issue had started to it mailboxes. The next day, I finally got my hands on my own copy!
There I am right in the middle of the magazine… 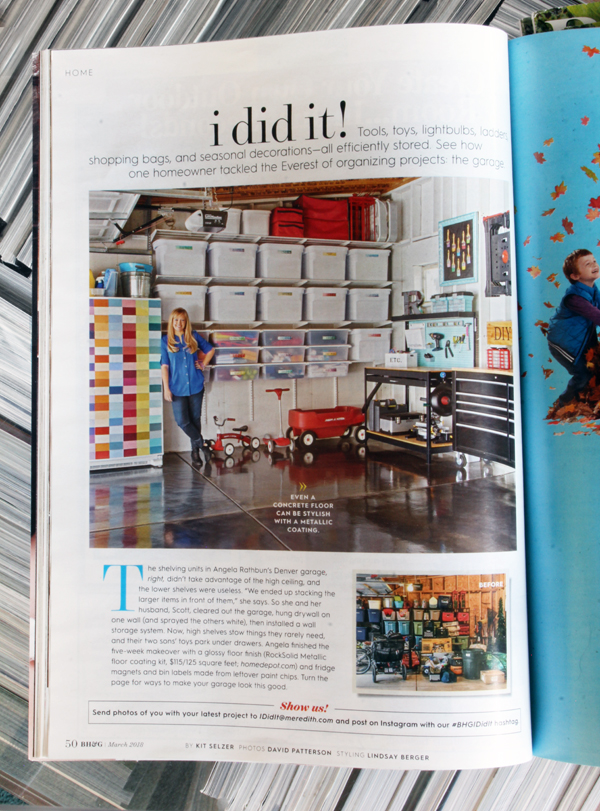 …and then again one page later with an interview and more details on all of our garage projects. 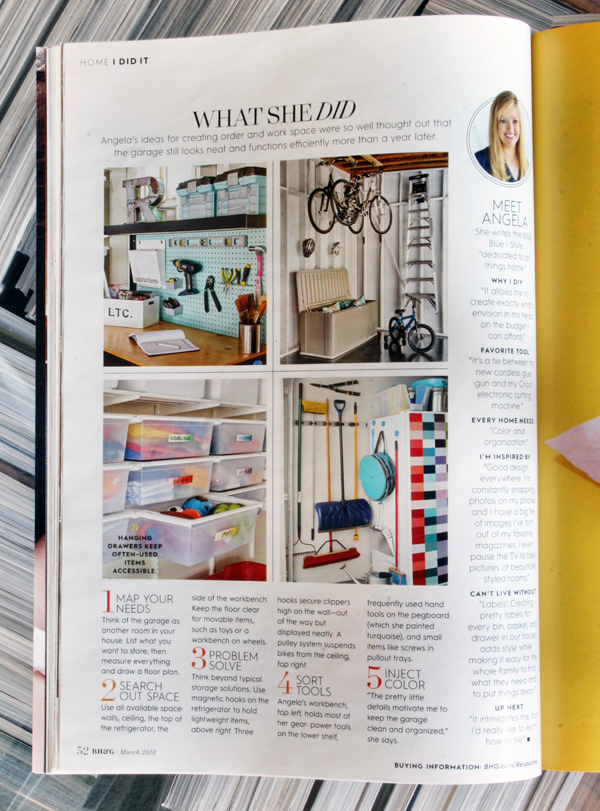 This was an amazing experience and I’m so grateful to Better Homes & Gardens for the opportunity, and to all of you for your support for of my Blue i Style for the past five years. I never would have thought I’d make the transition for attorney to blogger, but it’s been quite the adventure, and I look forward to all that’s too come (even if it means more strange looks from the neighbors)!
The March 2018 issue of Better Homes and Gardens magazine is on newstands now! Check my “I Did It!” feature on pages 50 and 52.