As I told you in my first nursery blog post, I decided to go bold and paint our nursery with ombre inspired stripes that graduate in color – from dark at the floor, to light at the ceiling – so that in the end, the effect would be similar to that of a paint sample strip. Click here to read about our color selection process. 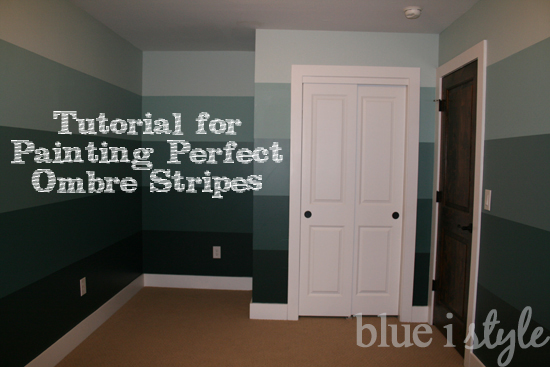 These were the five Benjamin Moore colors we ended up selecting (which may appear different depending on your screen settings).  For those who love the details, the colors are Benjamin Moore’s White Rain (708), Kensington Green (710), Fort Pierce Green (712), Polished Slate (713), and Hidden Falls (714).

Of course, the idea seemed brilliant in my head, but when it came time to actually get down to painting, I started to get nervous. I’d painted stripes before, but only in the context of painting one color of stripe over an existing color.  Painting five different colored stripes…this was a different kind of challenge. My husband and I sat down and hashed out our different ideas for how to best tackle the project in search of a plan that would ensure the crispest lines with the least amount of measuring and taping. Finally we agreed on a plan – and I am proud to say that while it was time consuming, it was very manageable and the results were exactly what we had hoped for.

(1) Assembling all the Necessary Tools: 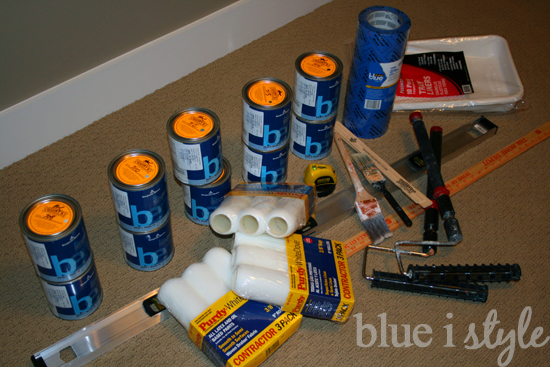 (2) Measuring, Taping and Painting Stripes 2 and 4

We measured the total height of the wall and divided by five to determine that each stripe should be 181/8” wide, then we cut down our yardstick to exactly that measurement.

Our goal was to do as little taping as possible, so we opted to paint the second and fourth stripes first – that meant that we could paint those two stripes without need for precise measuring or taping because stripes 1, 3 and 5 would end up overlapping. We simply placed the custom-cut “yardstick” at the ceiling to determine where the first stripe would end and the second would start, then we marked with painters tape every so far a few inches above where the second stripe would be, and a few inches below the second stripe. We used the same method, but measuring up from the baseboard to mark just above and below the fourth stripe.

With the approximate measuring and taping completed, the walls looked like this: 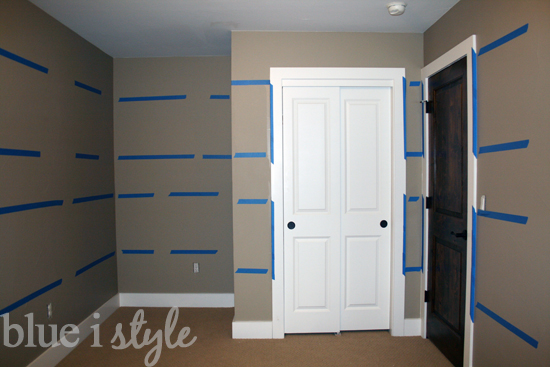 Since the colors of stripes 1, 3 and 5 would later be overlapping the second and fourth stripes, our only concern at this point was painting stripes 2 and 4 wider than 181/8”. That being the case, we simply used the tape as a general guide and quickly painted stripes 2 and 4 up to and over the tape without worrying about exact measurements or crisp lines. 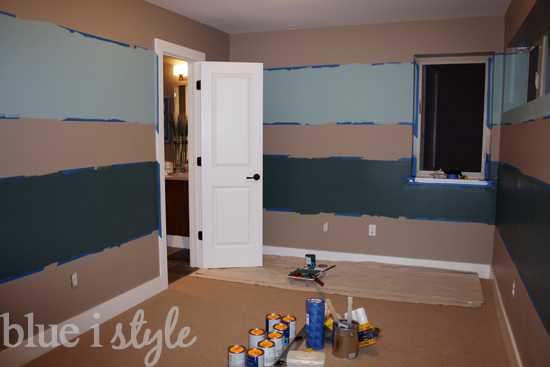 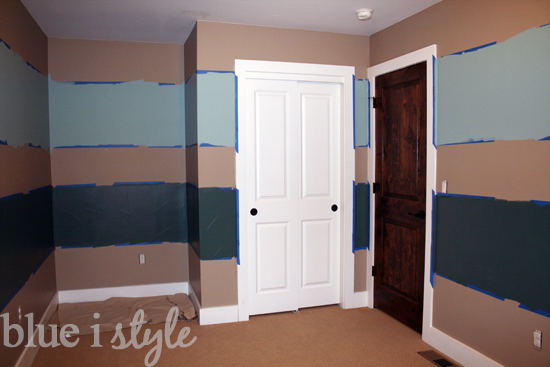 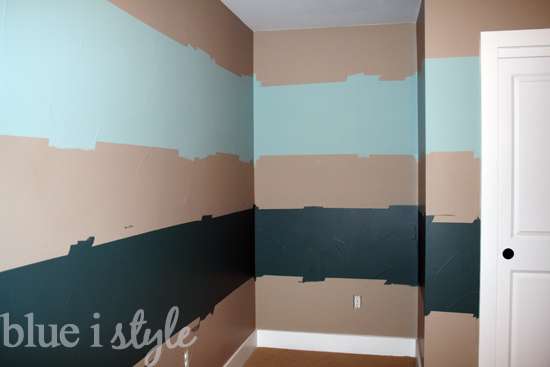 (3) Measuring and Taping Stripes 1, 3 and 5
Once stripes 2 and 4 were painted, we started to measure and tape for stripes 1, 3 and 5. Scott used our custom cut “yardstick” to measure 181/8” down from the ceiling to determine where stripe one should stop.  I took our laser level to the opposite end of the wall and positioned it such that the laser line was shooting straight across the bottom of the yardstick Scott was holding.  Once I adjusted the laser line to be totally level, I stuck the laser level to the wall using a 3M Command Strip. We then used both our yardstick and our regular level to double check the accuracy of the laser line across the length of the wall.  When we had verified that the laser line was in fact in just the right spot and truly level, all we had to do was tape directly below along the laser line. We repeated this step on each wall around the room until stripe 1 was fully taped out.  For stripe 5, we repeated the same methodology, but this time measured up from the basebard.
In order to locate the top of stripe 3, we used the custom cut “yardstick” to measure 181/8” down from the bottom of stripe 1 (i.e. the top of the tape).  We again used the laser level, and placed tape directly above the laser line.  To locate the bottom of stripe 3, we repeated the same process measuring up from the top of stripe 5 (i.e. the bottom of the tape), used the laser level, and taped directly below the laser line.  As a final check, we again used our custom “yardstick” to ensure that each stripe was exactly 181/8” wide.
Lastly, we taped at the ceiling and along the baseboards. 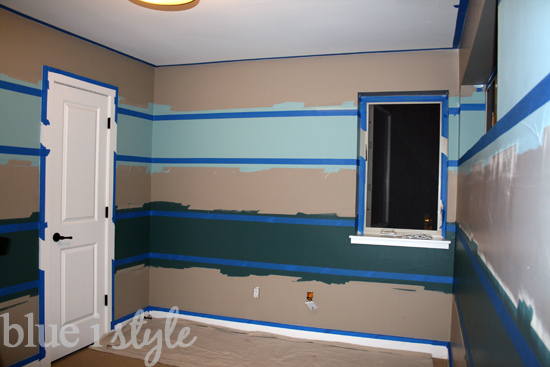 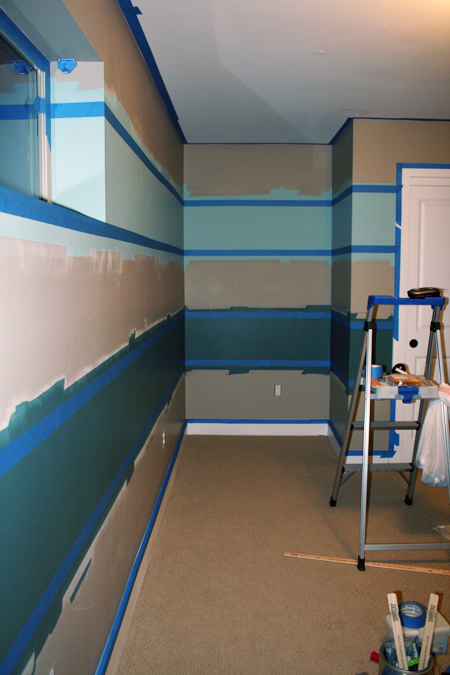 (4) Painting Stripes 1, 3 and 5
As I explained above, to ensure that no paint would bleed under the tape, we used a paint brush and faux glaze to seal along each taped line before proceeding with the painting. The glaze dries very quickly (by the time we finshed glazing, the glaze was already dry in the areas where we started).  We then painted the remaining stripes one at a time, starting with stripe 1. Since it’s best to remove the painters tape before the paint has fully dried (minimizing the risk of the tape peeling some of the paint off the wall) we removed all the tape  from stripe 1 before moving on to paint stripe 3. When we removed the first set of tape, we were thrilled to see that we had nice crisp lines – which gave us a boost of confidence and re-energized us to paint the final two stripes. 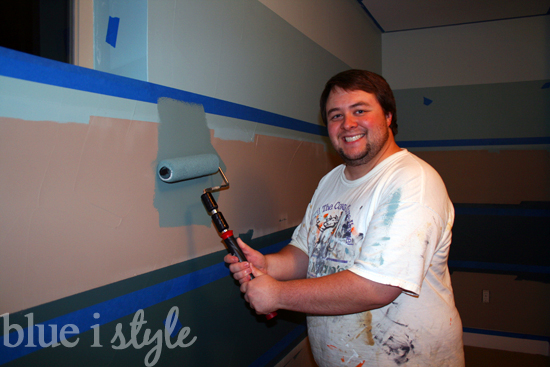 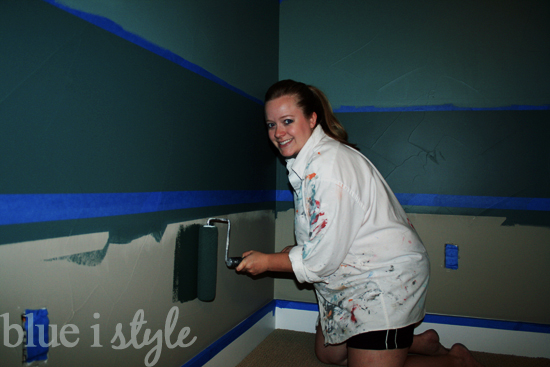 When all the paint was up, and all the tape was down… the finished product was worth all of the time and effort! 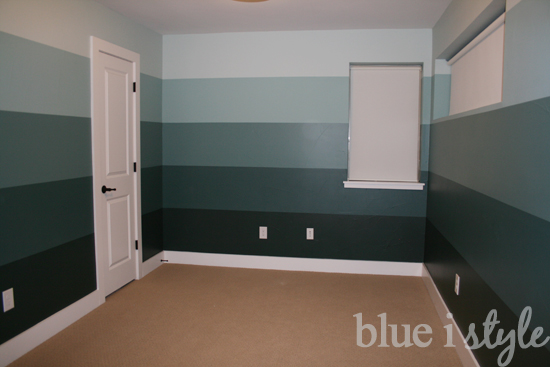 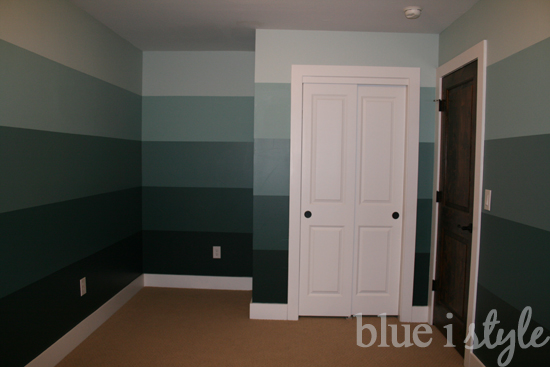 We’ve painted a lot of rooms – but this was by far our biggest paint challenge to date.   We were pretty proud of our accomplishment!! 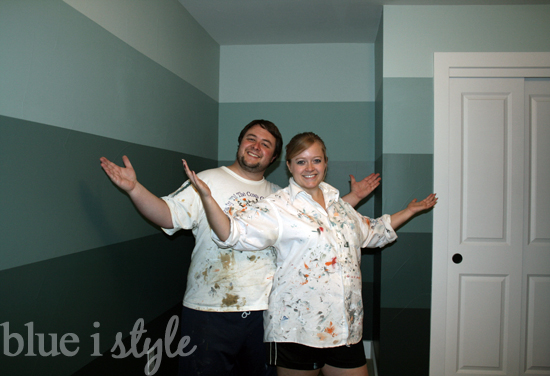 UPDATE: Want to see the finished nursery? Check out all the photos of the completed gender-neutral, modern animal nursery!
Now that you know how we achieved our ombre stripe effect, here are a few style tips to keep in mind if you are considering this look for your space:

Tip 1 – Selecting Colors:  It’s easiest to pick your paint colors all from one paint strip. While it can be tempting to pick your dark, mid and light colors from different strips – this can be a risky move. The colors may look like they blend well together based on small paint samples, but when painted on the walls in large quantities, you run the risk that the different undertones of the colors may clash – especially as the light in the room changes throughout the day. At the other end of the spectrum, don’t try to create your own paint shades by starting with one dark color and adding white to create the lighter shades. Unless you are painting a small accent space, you not only chance running out and having to mix more (in which case you’ll never get a perfect match), it will also create major headaches if and when you need to touch up the paint in the future.

Tip 3 –  Width of Stripes:  Not all of the stripes have to be the same width. While we opted to keep our stripes uniform, you could instead have the darkest stripe be the widest, and have each successively lighter stripe be a bit narrower than the one below it, like this: 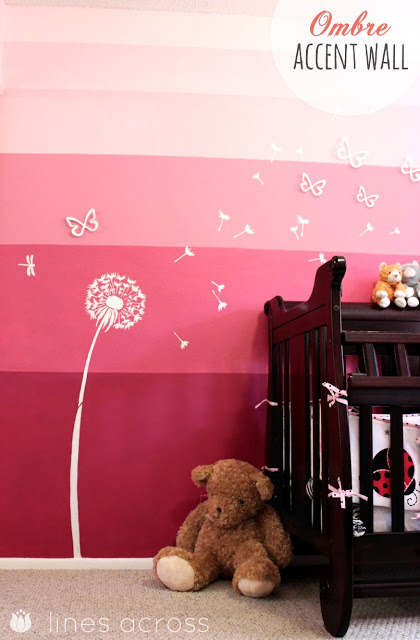 {source}
If you want your stripes to look even more like a paint swatch, consider adding a white stripe between each color (but be prepared for even more taping if you go this route). 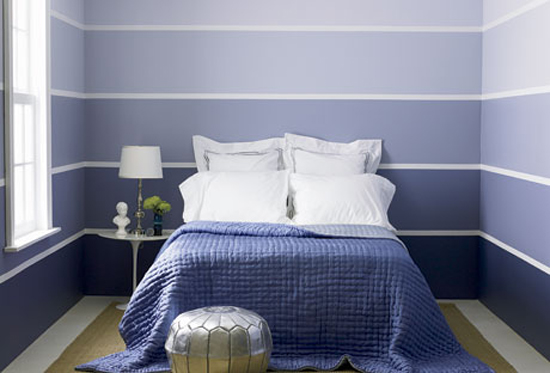 Or if you are really brave, you could blend the colors into one another rather than having crisp lines between each – and if you come up with a great way to achieve this look in a consistent manner, I’d love to hear about it! 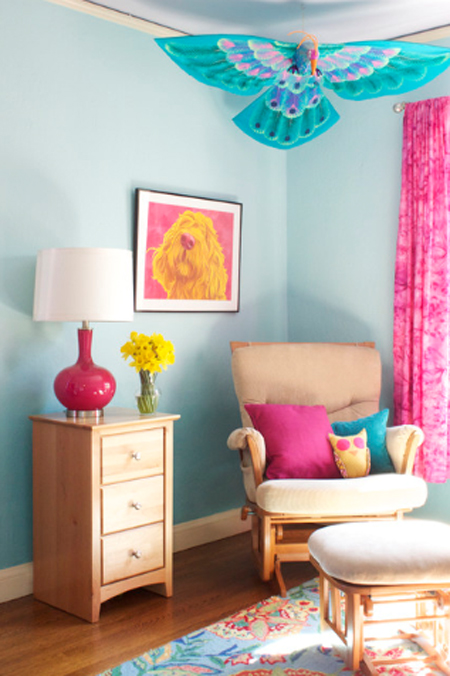 Tip 4 – Alternatives to Painting the Whole Room:  If the idea of painting the entire room in ombre stripes overwhelms you, or just isn’t for you – try just one small accent wall and chose one of the mid to light shades for the remaining walls. 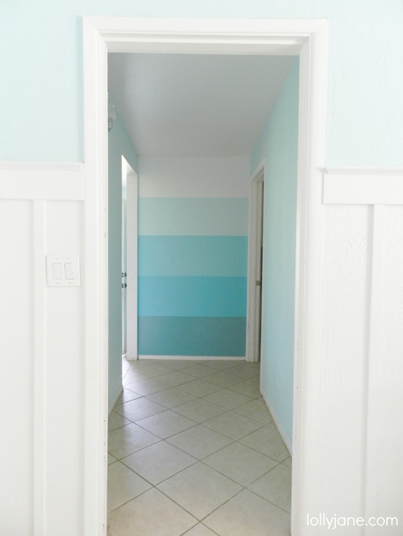 If the idea of wall stripes is too much for you – consider the graduated stripe approach on the drawers of a dresser by painting each drawer front in a lighter shade than the one below it. 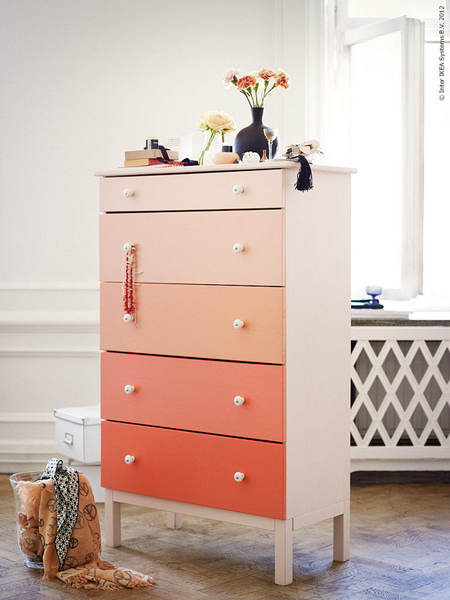 {source}
Or consider simply painting ombre stripes on a canvas to create a custom piece of art. 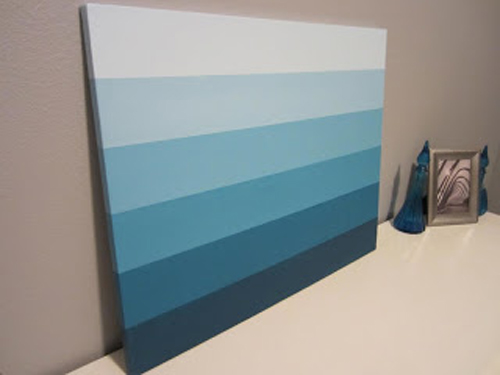 Have you added any ombre to your home?  I’d love to see your projects!