When I came across two canvas prints – Watching Over NYC and Watching Over LA by Zoey Riley – on final closeout at Z Gallerie a year or so ago {they are now back, but in a more expensive glass coat versions}, I immediately knew they would be a key element in the master bedroom refresh I had been dreaming of. The shades of blue were perfect to tie in with our existing blue duvet that I wanted to keep, and the skylines set the perfect mood for the Modern Metro vibe I wanted in the room. 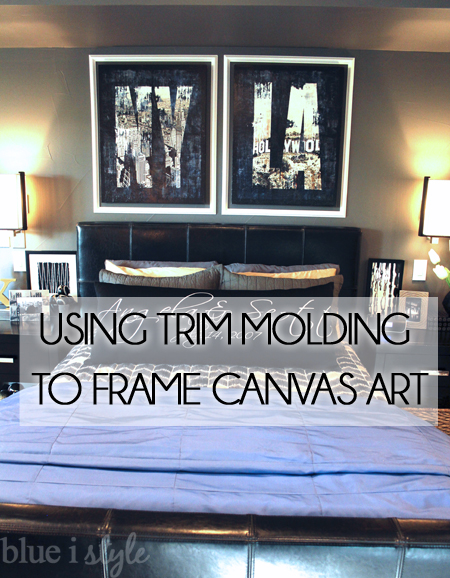 The only problem was that the the canvases were quite dark, and I was afraid they would get lost on the dark grey accent wall in our bedroom, especially when hung above our black headboard. 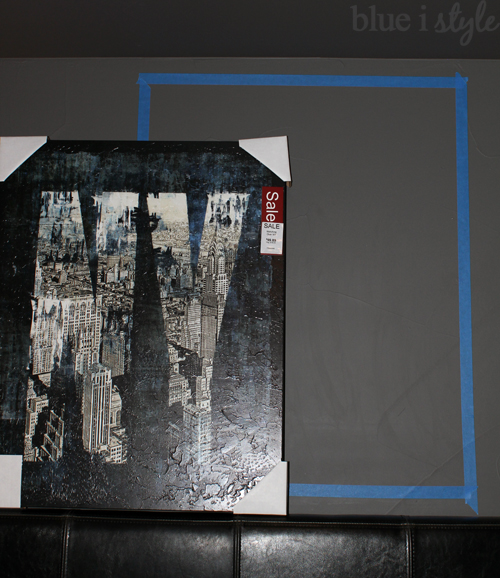 To brighten up the space, I decided to add some pops of white around the room, including using crisp, white trim molding to frame around the canvases – making the art a major focal point of the room!


With the help of my two cute little contractors, I hit up my local Home Depot for the trim molding I needed for this project. I selected a 1 3/8″ wide paint grade Panel Style MDF Molding, where was available in 8 ft and 12 ft lengths. I calculated the amount of molding I needed based perimeter measurement of each canvas, and then added extra because I wanted the frames to float around the outside of the canvases by one inch.


Next, I needed to cut the molding in to the appropriate lengths with mitered corners so that the corners would fit nicely together just like a picture frame. Since I don’t own a miter saw, I headed over to my dad’s house for a little father-daughter garage bonding time.

This was my first time ever making miter cuts, so my dad showed me the ropes. We began by adjusted the saw to EXACTLY 45%. I knew the exact length I wanted the inside edge of each rail to be – so we measured and marked our first two pieces accordingly. For the long side of each frame the inner measurement was 32″ {the length of the long side of each canvas is 30″ + 2 inches – one inch on the top and one on the top and bottom to create the gap between the frame and the canvas}. And for short side of each frame, the inner measurement was 26″ {24″ for the short side of the canvas + 2″ for the gap around the canvas}. 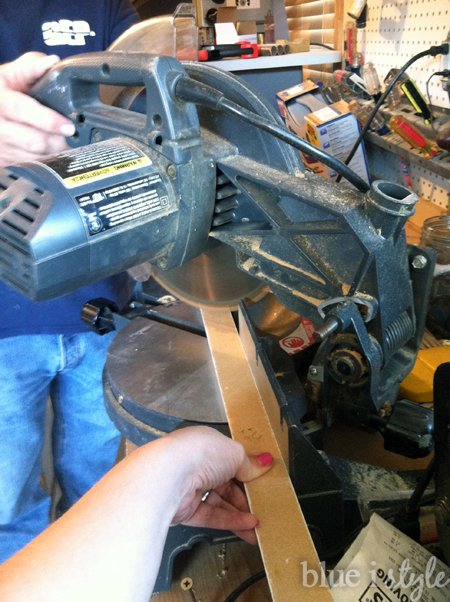 Remember that when you are cutting the two pieces that will fit together, the angles will be the opposite. One option is to rotate and reset your saw to 45 degrees on the other side, but each time you adjust the saw you run a risk that the angle will not be set exactly the same, and then the frame will not fit together flush at the corners.

Instead, after cutting the first long side, we laid it down on top of the short piece we had measured. We matched up the back sides of the trim, and traced the angle on. This gave us a good check for the angle measurement, and by placing them back to back, it also ensured we would get the opposing angles correct. As a result, we were able to leave the saw set in the same position the entire time, and we simply made some cuts with the molding face up and some with the molding face down in order to get our opposing angles. 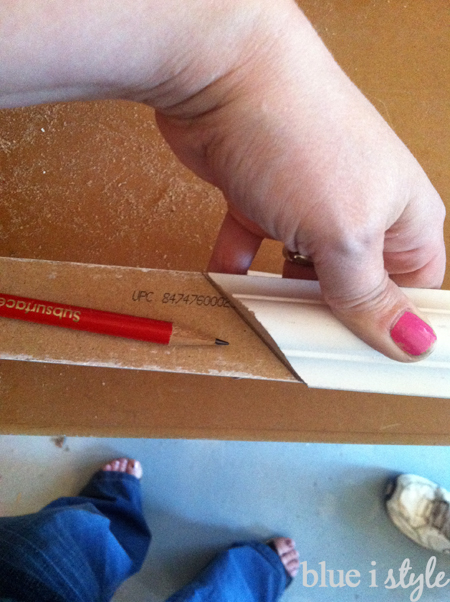 In order for your frame to fit together correctly, not only do your angles need to be just right, the lengths of the parallel sides also need to be EXACTLY the same. For that reason, we cut one long and one short piece, then labeled each as the “Master” and used those masters as templates to mark the remaining three long and three short pieces of molding. This also ensured that our two separate frames would be as close as possible to identical in size. 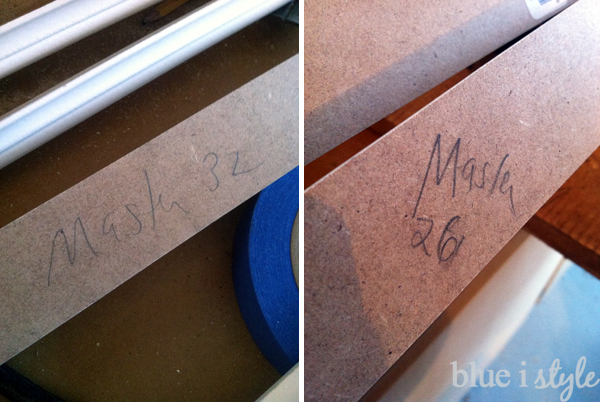 Once all of our trim pieces were cut, we matched them up into two sets and taped them together. This helped me keep track of which pieces fit together so that I could assemble them in to frames when I got home. 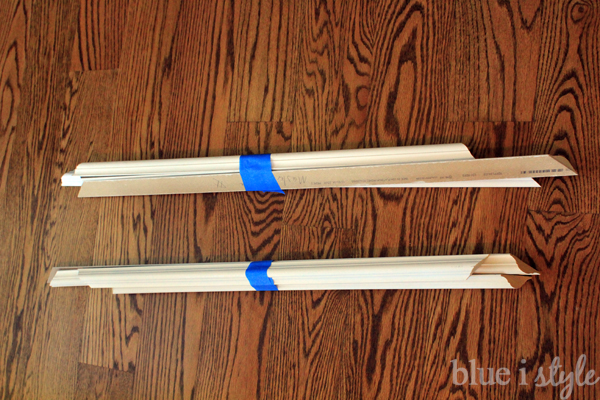 STEP 3: ASSEMBLE THE FRAMES
Once home, I was ready to assemble the frames. Since the frames would be affixed to the wall, I only needed the joints to be sure enough to hold them in place while I nailed the frames to the wall, so I decided to the glue the joints rather than attempting to staple gun them. If you have ever tried to staple gun mitered joints together you know it can be difficult to get them positioned exactly {which is why some many cheap picture frames don’t fit together well at the corners}. An employee at Home Depot recommended that we use TeqBond Adhesive which is made for Miter and Scarf Joints. 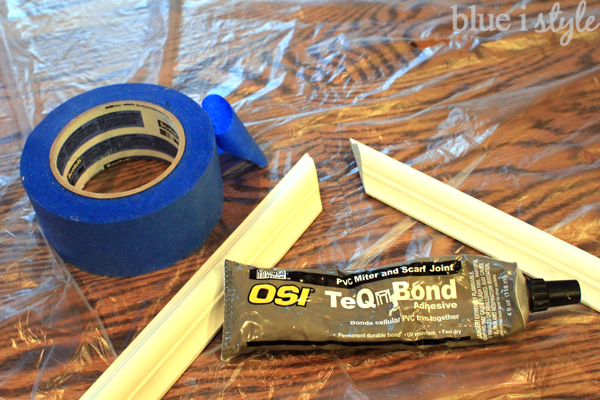 Ok, so now comes one of those “do as I say, not as I did” moments! I had it in my head that as long as I matched up the miter edges I would end up with a perfect frame… So I simply glued the frame pieces together in sets of two, taped the corners up to hold them in place while they set, and then completed each frame by attaching two sets together. 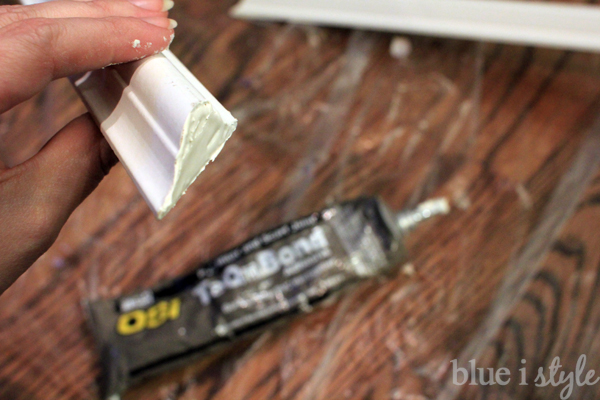 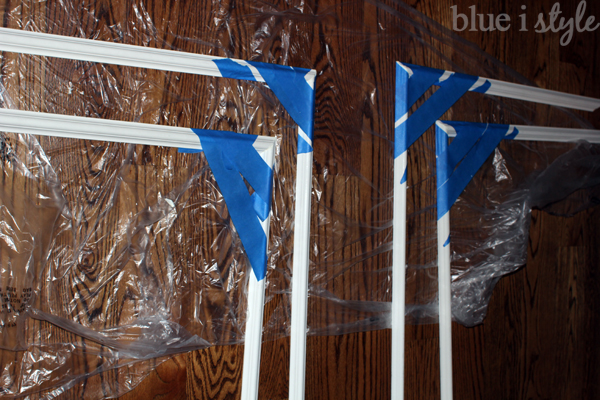 My frames came together looking great, and I was so proud of them, until I laid on of the canvases inside of a frame to see how it looked and discovered that despite the corners fitting nice and flush, my frames were a bit askew. Instead of nice, 90 degree corners, I had instead created frames that were slightly more like parallelograms than perfect rectangles. Doh!! I had to break them back apart at the corners {hard to do, because that is some strong adhesive} and start again. Be smarter than I was and use a t-square to make sure you are creating perfect 90 decree corners when gluing your miter joints together!


Once my frames were re-assembled, they were ready to be painted. I know they already look nice and white in the photos, but they really just had a somewhat dingy primer coat. Scott took them out to the garage and painted them using the same white paint that we have on the baseboards in our bedroom. I was busy working on another project and forgot to go out to take photos {bad blogger}, but I think you can visualize this step.

STEP 5: ATTACHING FRAMES TO THE WALL


It was finally time to attach the frames the wall above our bed. I measured out where I wanted them to be placed, made some pencil marks on the wall as my guidelines, and then used painter’s tape to tape the first frame to the wall in the exact position where I wanted it. Putting the frame up with tape first, rather than jumping right in to nailing, allowed me to double and triple check the level of the frames and make any necessary adjustments. 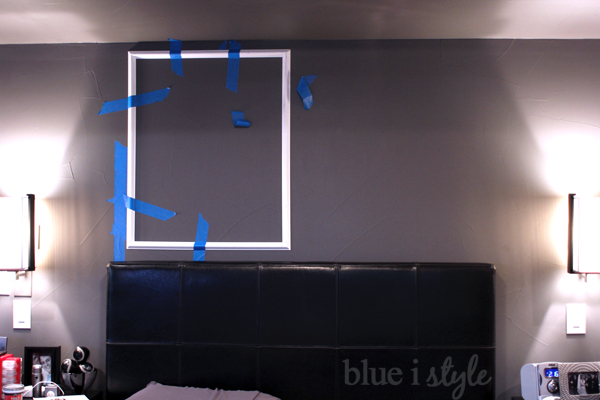 Once I had the first frame in place and level, I used my brad nailer to place several nails along each side of the frame. 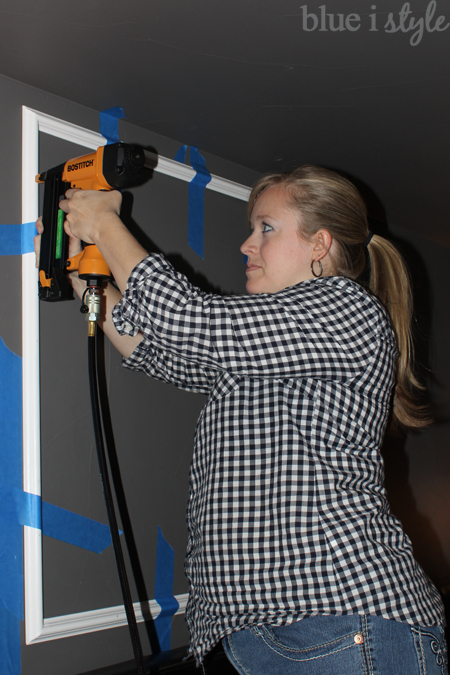 With the first frame nailed in place, I removed the tape, admired my work and then repeated the steps to nail the second frame to the wall. 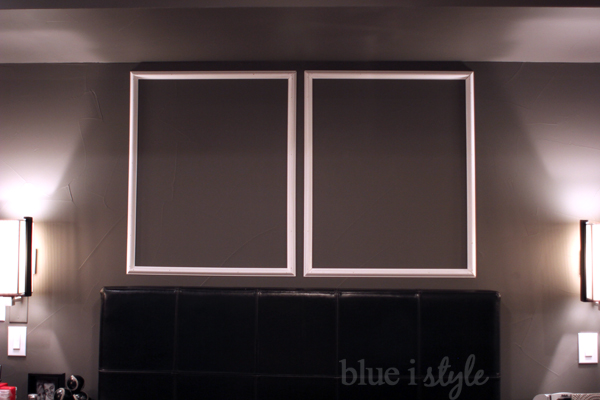 
The final step before hanging the canvas art inside the frames was to touch up the small nail holes and touching up the paint. 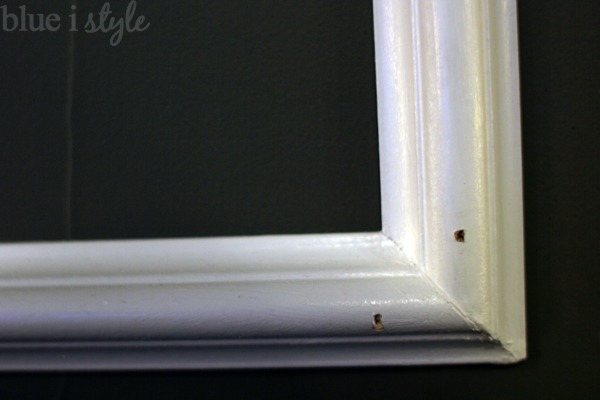 I used wood filler to fill in the small holes. 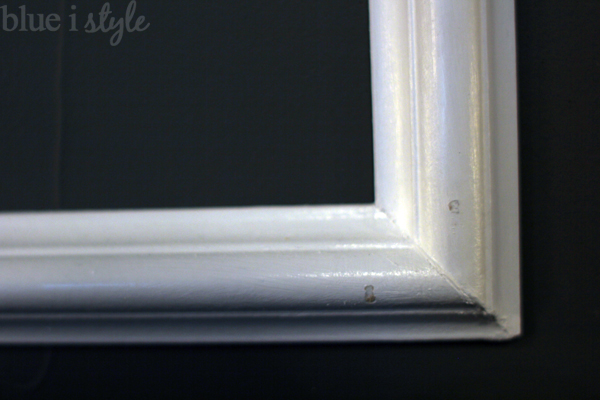 Then once the wood filler had hardened, I used a narrow paint brush to touch up the paint. 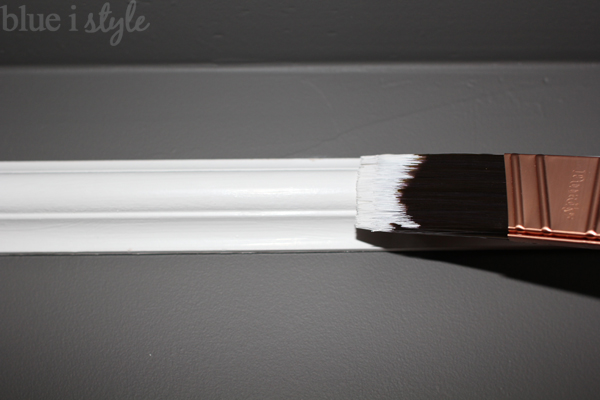 
Here comes the fun part – hanging the art and admiring the finished project! 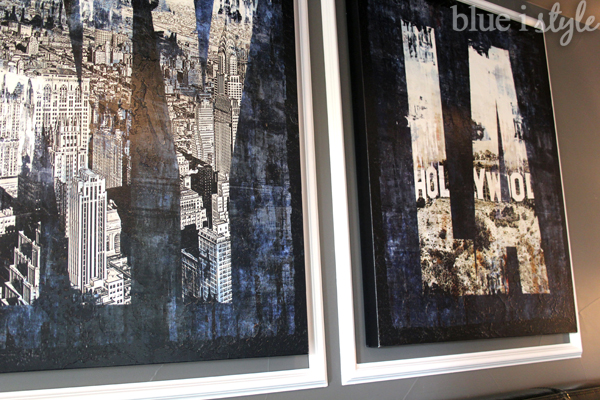 I feel the frames really have such a hug impact on the room. The art wouldn’t be nearly the focal point they are without that trim molding. 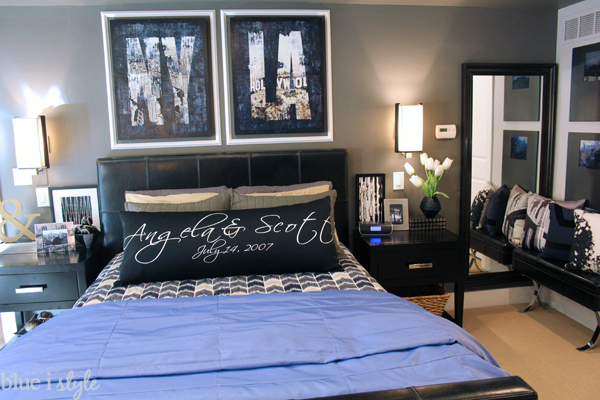 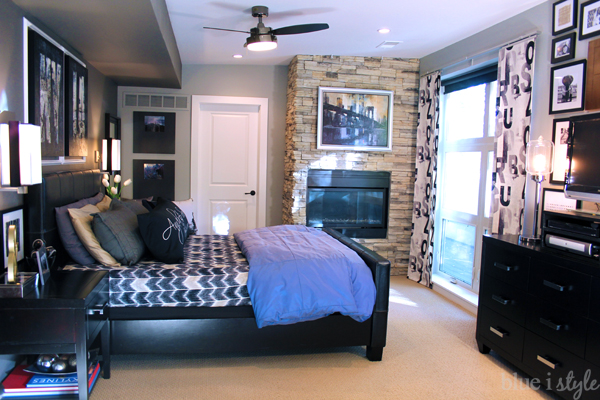 Here are a view more views of the framed canvases above the bed, because I just can’t get enough! 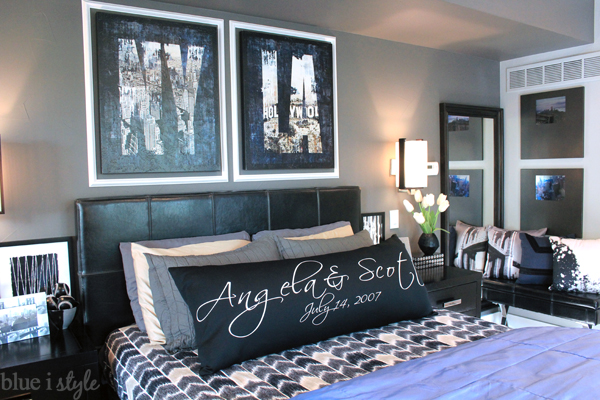 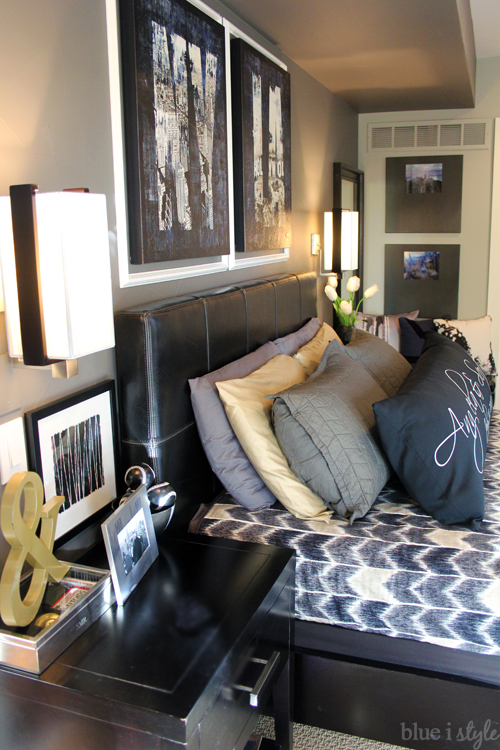 And here’s a fun fact… this little DIY project even got me featured on the Black & Decker billboard in Time Square right around the holidays! How cool is that?! 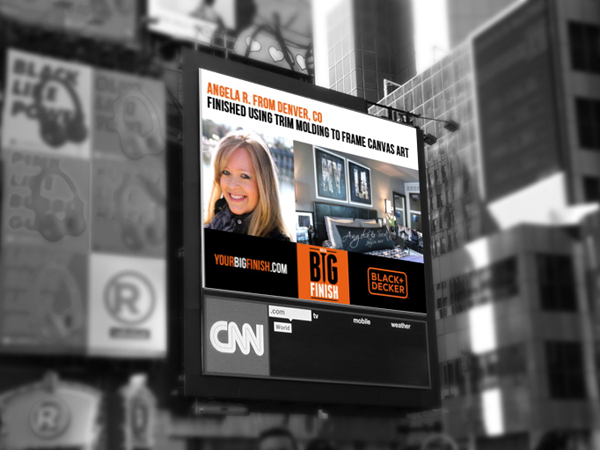 Want to see the rest of our bedroom makeover? Check out all the master bedroom reveal photos and some fun before and afters!