I love to cook, but I’m typically more of a recipe follower than a recipe maker. About a decade ago, I tried pomegranate guacamole for the first time – made by none other than Dean Martin’s youngest daughter, Gina. I asked her for the recipe, but when she sent it over to me, it was for her regular guac, not the pomegranate version. I tried simply adding pomegranate seeds to the recipe she gave me, but it wasn’t right. I couldn’t bring myself to bug her for the recipe for a second time, so I decided to play around with different combinations of ingredients on my own. 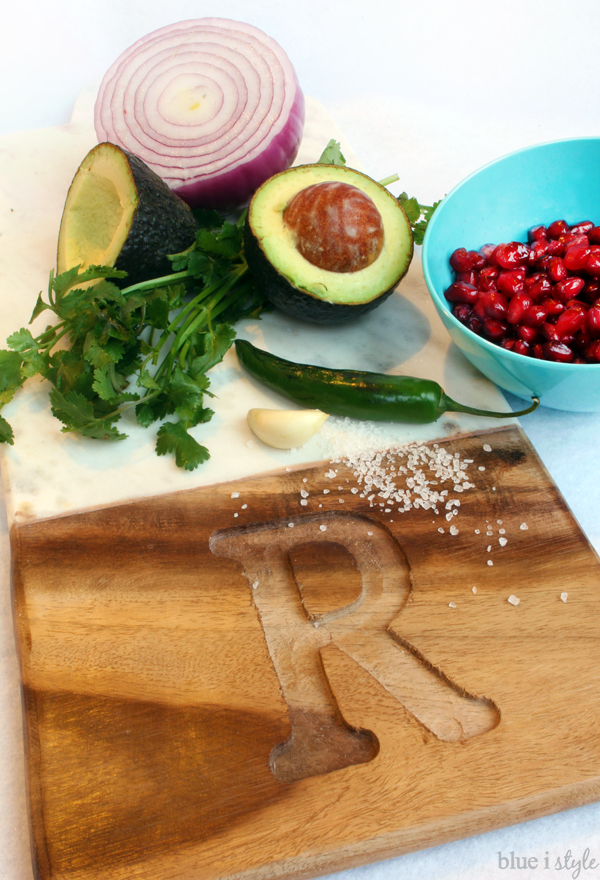 After years of tweaking, pomegranate guac has become one of my go to recipes. My friends are constantly asking me to bring it to any gathering! With the Super Bowl coming up this weekend, it seemed like the perfect time to share it with all of you. {If you’re hosting a party for the big game, be sure to also check out these Super Bowl party decorating ideas.}

1/4 cup red onions, finely chopped
2 serrano pepper, finely chopped, with seeds
2 cloves garlic, pressed
1/4 cup cilantro, finely chopped
2 tbsp lime juice
1 tbsp coarse sea salt
1 cup pomegranate seeds
Peel, core, and quarter the avocados. Chop or mash the avocados to your desired level of chunkiness. I prefer to use a mortar and pestle to make mine pretty smooth because the other ingredients add a lot of chunkiness, but a fork also works well.
Stir in the chopped red onions, serrano peppers, garlic, and cilantro until well combined. Then add the pomegranate seeds and stir gently to combine without squishing the seeds.
Finally, add in the lime juice and sea salt to taste. The serrano seeds add a good deal of kick to this guac. If you don’t like your guac spicy, you can remove the serrano seeds completely – or add more lime juice to help cut the heat.
Serve with your favorite tortilla chips and enjoy. The sweet and tartness of the pomegranate seeds is a perfect compliment to the spiciness of the peppers! 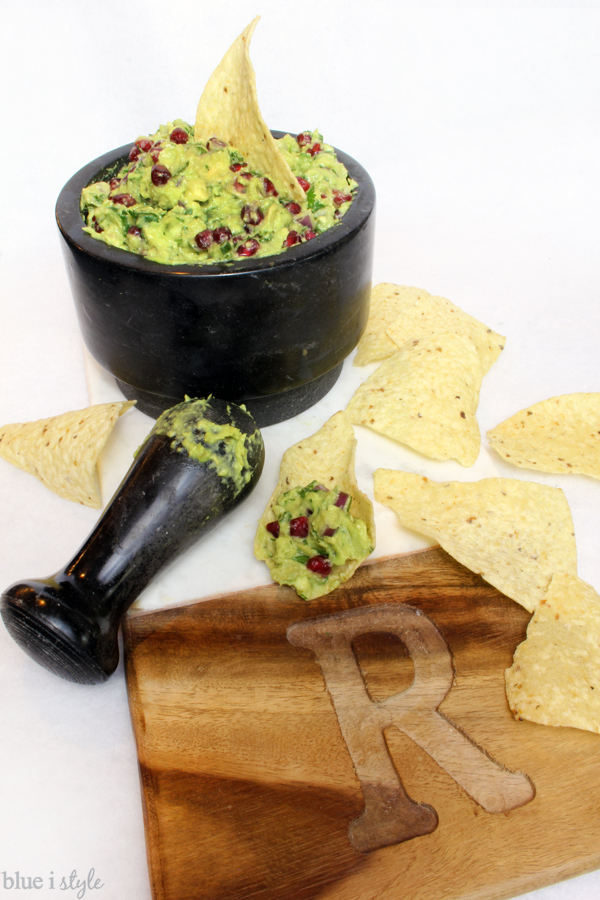 A couple of notes on pomegranate seeds:
Pomegranates are in season in the Northern Hemisphere from about October through February. One pomegranates yield about 1 cup of seeds. Personally, I don’t like the mess of removing pomegranate seeds since they so easily stain countertops, cutting boards, and clothes. I prefer to spend a bit more for the convenience of buying ready to eat seeds in 4 oz {1/2 cup} quantities from the refrigerated case in produce section of the grocery store.
It is becoming more common for pomegranates and their seeds to be imported from the Southern Hemisphere from March through May, but it’s pretty hit and miss at my local grocery stores. I’ve learned to call ahead to several stores to check availability before heading out to do buy ingredients if I want to make this guac during the spring months. I also noticed frozen pomegranate seeds at a grocery store recently. I have not yet tried the frozen variety, but if they defrost well, this might be the answer to enjoying pomegranate guacamole year round!!